Asus premium-line of ultrabooks hasn’t been updated in more than a year, and that’s changing as of late-2020 with the introduction of two new models: the clamshell ZenBook S UX392 and the convertible ZenBook S Flip UX371.

These are not just a hardware update of the previous ZenBook S designs, Asus improved them in a couple of different ways.

Among the novelties, the standard ZenBook S UX392 now gets a 3:2 3K touchscreen, while the 2-in-1 model gets an OLED touch display. Both screens are bright and color-rich, with 100% DCI-P3 gamut coverage, and both lines are built on Intel Tiger lake hardware with XE graphics, 67 Wh batteries, and support for Thunderbolt 4 connectivity and USB-C charging.

I look forward to properly review these two ZenBooks, as on paper they’re finally up-to-date with the current expectations in the premium ultrabook segment, right there next to the Dell XPS 13 or the Microsoft Surface laptop, where ZenBooks have struggled to properly compete in the last year.

We’ll update with links towards our reviews once available, and in the meantime, down below I’ve put together a quick summary of what to expect from these products, as well as what could be some potential quirks that you’d best be aware of.

Update: Our detailed review of the ZenBook UX393 is available over here.

First off, these two series share a few of their traits. On the outside, both are entirely made out of aluminum, with a unibody design for the UX393 (and possible for the UX371 as well, but I’ll need to confirm that) and the same color scheme: a dark gray (called Jade Black) with gold branding elements and accents.

We’ve seen these lines implemented on past Asus ZenBook S products, and while that part around the screen’s frame is a bit much for me, these are definitely nice looking and exquisite. I’d also expect the overall build quality to be on par with the expectations and a step-up from the more affordable ZenBook 13/14 lines we’ve recently reviewed. 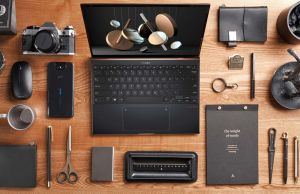 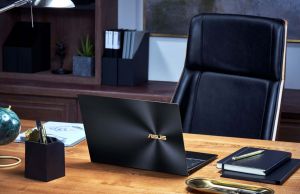 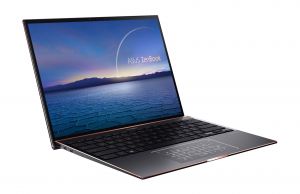 Design aside, these two are also built on the same Intel Tiger Lake hardware platform, with up to 16 GB of LPDDR4x memory and 1x SSD storage slot, as well as a 67 Wh battery. I’d also expect them to share the thermal design and power settings. Asus mentions Whisper, Standard, and Performance modes available in the control app, for you to choose according to your need.

However, these ZenBook S are built on Asus’s Ergolift design fundamentals, which helps create a slightly inclined typing position and facilitate air-flow underneath the laptops, but also blow the hot air straight into the screens, which is one of those quirks that we’ll have to look into in the reviews.

Both these lines get touchscreens with protective glass on top of the panel, but the screen is close to the exhaust on the ZenBook S UX393 with that tiny bottom chin, so it might heat up. We’ll see. That shouldn’t be an issue on the ZenBook S Flip UX371 models, as those get a much heftier chin underneath the panel, with their 16:9 display. 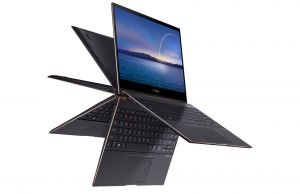 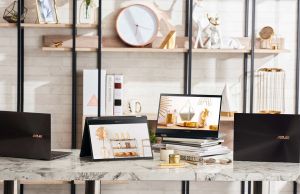 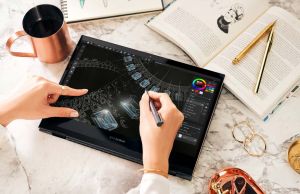 Speaking off, the displays are the number one aspect that sets these two devices apart. On one hand, the ZenBook S UX393 is a clamshell laptop that I’d expect will only allow the screen to lean back to about 140-150 degrees, but gets a 3:2 3K touchscreen, thus a more practical option for everyday multitasking, thanks to its increased height and workspace. On the other, the ZenBook S Flip UX371 is a 2-in-1 laptop with a 360-degrees convertible touch display, but only implements a standard 16:9 panel.

And there’s one more thing to consider here, as Asus put bright and punchy screens on both these devices: a 500-nits IPS panel with 100% DCI-P3 color coverage on the S UX393, and an up to 400-nits OLED panel with the same kind of 100% DCI-P3 color coverage on the Flip S UX371. Both are excellent in their own way, and we’re not going to insist on the advantages and quirks of each technology here, but we’ll surely address them in-depth in the upcoming reviews.

Inputs are the other major detail that could steer you towards one or the other line, and the ZenBook S UX393 has an edge here. Both are available with the same large glass-covered touchpad with NumberPad functionality, but the ZenBook S Flip series gets a shrunk down keyboard layout, with slightly shorter keys, the same we’ve already tested on the ZenBook 13 UX325. It’s a fine keyboard, just cramped and cumbersome. This layout also includes an extra column of function keys at the right, though, which is not available on the ZenBook S’s keyboard.

Instead, the ZenBook S implements a simpler layout, but with full-size keys across the board and redesigned keycaps and scissors. Asus mentions that they’ve used a mix of fiberglass and plastic for the scissors, which allows for a slightly thinner keyboard and quieter and firmer feedback. They’ve also redesigned the illumination system in order to reduce light bleeding around the keycaps, so on paper, this could be an excellent typer, but let’s not jump to any conclusions before we get to use it. Once more, something we’ll carefully look into in our reviews.

Before we wrap this quick preview up, I should also mention that these two ZenBook S lineups share most of their IO and connectivity options. Both get HDMI, USB-A and 3x Thunderbolt 4 ports, none of them includes a dedicated 3.5 mm audio jack (yet Asus bundles a USB-C to 3.5 mm jack adapter in the pack), both charge via USB-C, and the clamshell model also offers a microSD card-reader, while the convertible model does not.

However, the convertible ZenBook Flip S UX371 series is both more compact, slimmer, and lighter than the standard ZenBook S UX393 model, which comes to no surprise, as that one has to accommodate the larger and heavier 3:2 screen.

In conclusion, I expect these two late-2020 ZenBook S models to be some of the best ultrabooks of this generation, and I’m especially rooting for that practical ZenBook S UX393 as a potential candidate for retiring my aging XPS 13. No way to tell whether Tiger Lake is any good for now, and I’m also hoping that Asus haven’t messed up that new keyboard or the thermal design. Of course, as premium ultraportables, I’d expect these to cost a pretty penny, but that’s just normal for this class. No word on pricing and availability either, but they should land in stores around Q4 of this year.

Looking forward to reviewing these, and in the meantime, I’d love to hear your thoughts about them in the comments sections down below.