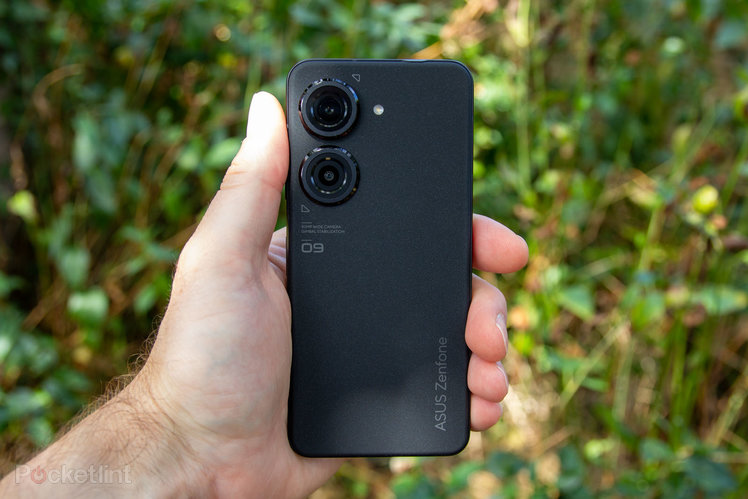 Asus is tackling a part of the market that others seem to have abandoned with the Zenfone 9.

It’s the compact flagship phone segment, meaning that those who want a smaller device don’t have to compromise on the top specs.

There isn’t huge competition in this space: the Sony Xperia 5 III (and IV when it is announced) or the Xiaomi 12 are the only obvious rivals.

That leaves Asus to exploit this position, and, in the Zenfone 9, it’s doubling down on the work it started with the Zenfone 8.

Sticking to a compact form factor, the Zenfone 9 is about the same size as the Zenfone 8, but it makes some fairly significant changes.

That includes a shift in the body design, from those curved edges to a squared finish.

There’s a hint of iPhone about it, although the Zenfone builds on this with two huge camera lenses on the rear which really makes it stand out from the previous model, while the rear is a totally different material, too. 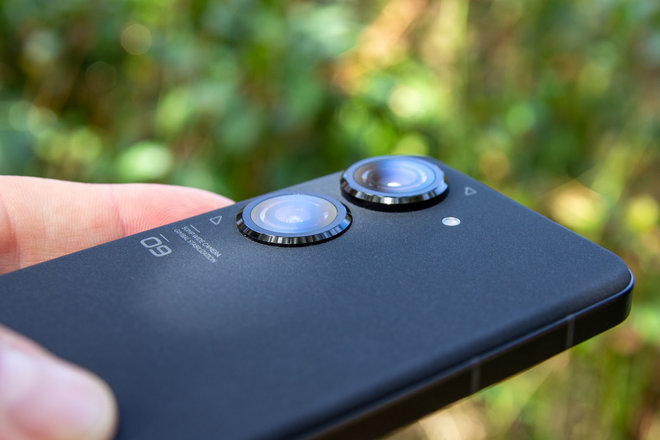 Asus has ditched the glass rear, this time using a composite, but it’s been formulated to give it a soft touch texture. It’s tactile, it’s strokable and it’s grippy. It’s also unique, staying free from fingerprints and avoiding reflections.

There are details scattered around it to make it a little more interesting than just a plain phone, like the 09 numbering and the camera details scribed on the back. It’s not garish like some devices and the more time we spend with it, the more we like it.

Around the power button, there’s been a fairly significant change. Asus has ditched the in-display fingerprint scanner and opted to put it in the power button on the side of the phone. But it’s not just for unlocking – which it seems to do perfectly well – but it also has support for swipes. 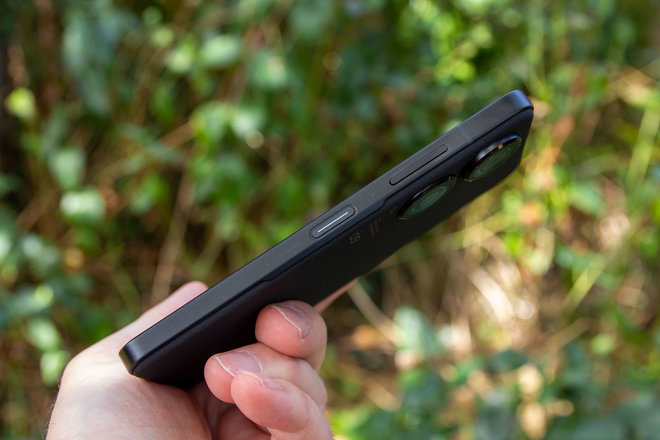 We’ve seen similar from Sony Xperia in the past and it’s a good use of space, allowing things like swiping to pull down the notifications shade or to refresh an app or webpage. Sounds great, but we found ourselves regularly swiping down the notifications when handling the phone, so you may well find yourself turning this feature off.

Despite being a compact phone, Asus is still offering stereo speakers and a 3.5mm headphone socket. On the wireless front, there’s Hi-Res music support from aptX Adaptive and LDAC, so with supporting headphones, you’re well served. 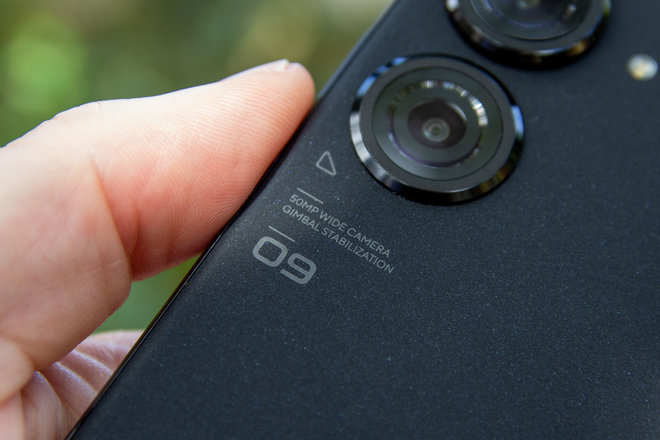 There are stereo speakers with appreciable volume and they sound great, although there’s a fair amount of vibration through the back of the phone at the highest settings. Still, it’s great for gaming without headphones.

The whole thing is wrapped in a package that offers IP68 waterproofing, again, with no compromise for choosing a smaller device. There’s even a free hard shell in the box to protect your phone.

The display on the Zenfone 9 is the same size and resolution as the previous edition of this phone, sticking to that 5.9-inch diagonal and a full HD+ resolution.

With a 446ppi pixel density, this display is plenty sharp and thanks to the AMOLED tech, it’s nice and punchy too.

There’s also a peak brightness of 1100 nits, meaning it can punch through reflections in bright conditions. 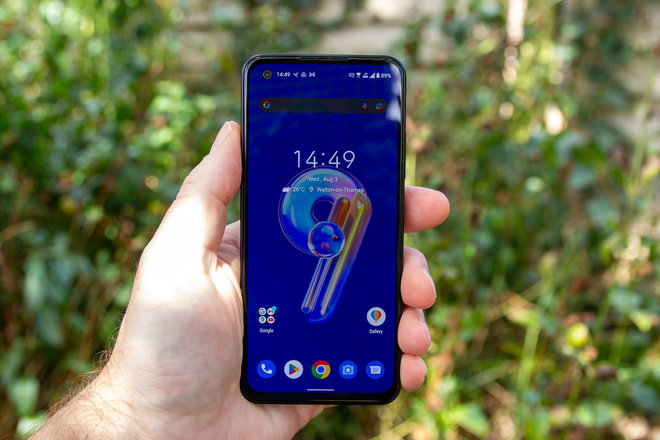 The Zenfone 9 offers a 120Hz refresh rate, which is the same as the Zenfone 8, with the same arrangement of letting you choose 60, 90 or 120Hz, or just leaving it in auto to let the phone choose the best refresh rate for the content you’re viewing.

There’s support for HDR too, so when you fire up your favourite streaming service you’ll get the best performance from it – although in all honesty, at this size, it’s difficult to really spot any real advantage.

Overall, the only downside of course is that you have a little less space on this phone than on most other devices – but having a smaller phone is probably the reason you’re interested in this device in the first place.

The Zenfone 9 comes with the latest version of Qualcomm’s top mobile hardware – the Snapdragon 8+ Gen 1.

It’s supported by 8-16GB of RAM, with options for 128 or 256GB of storage, so there are a number of model options to choose from. There’s no microSD support, but there is dual SIM support. 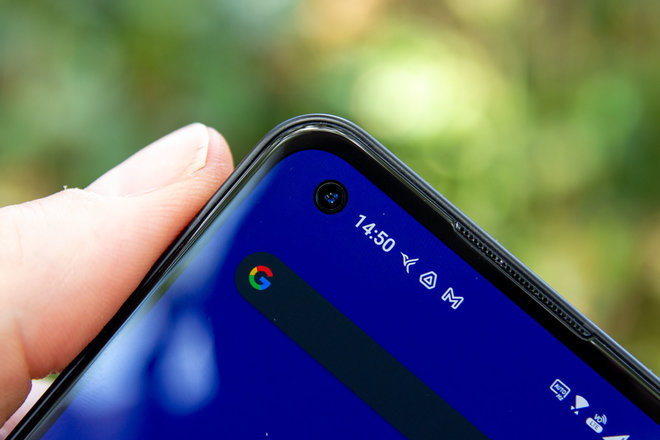 The great advantage of packing this hardware into this phone is that you’re getting flagship performance, rather than having to compromise on the power available, which is the case in some other smaller devices.

The biggest criticism we had of the Zenfone 8 was that it ran a little hot. The Zenfone 9 is a little better in this regard, switching to a vapour chamber for cooling, rather than using heat pipes.

That helps keep things cooler, but when you push the phone it will still heat up a little: there’s just less space for cooling than in a larger phone. 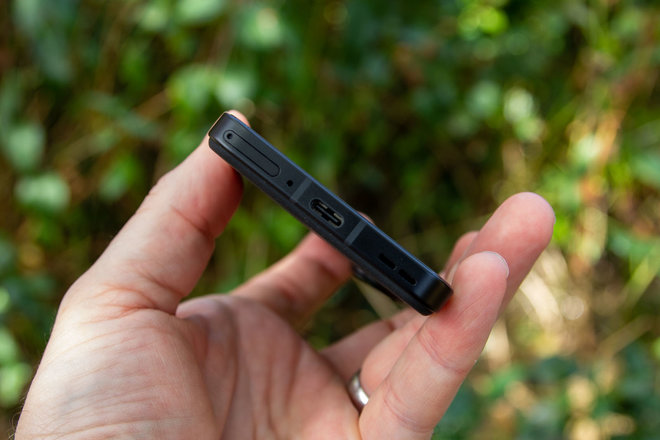 We haven’t found that to downgrade the performance, however, and long gaming sessions are no problem – apart from being a little cramped with the controls on the display.

There’s a 30W HyperCharge charger in the box (a rarity these days), too, which means you can quickly recharge the 4300mAh battery.

It’s not the fastest charger out there, but, unless you really need to get out of the door, we can’t see that being a huge problem for anyone.

There’s no wireless charging, however – it’s cable only. 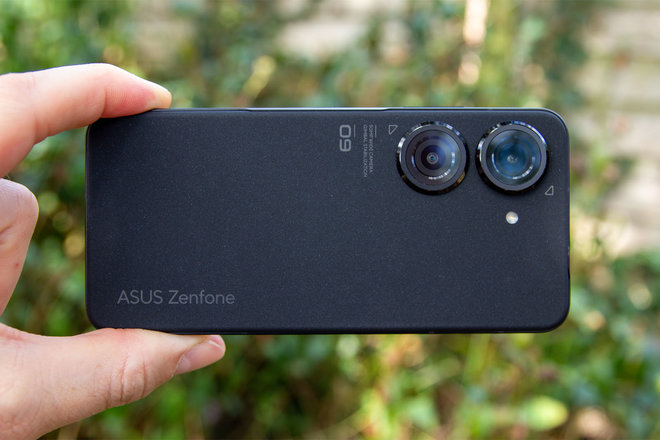 The battery life is also good. In lighter use this phone will make it through the day and into the next pretty easily, so you don’t necessarily have to charge it every night.

Overall, the performance delivers much the same experience as any other flagship phone. It’s smooth and fast, and perfectly capable.

The only real difference between this and most flagship phones is the fact that it’s much more compact.

There are two cameras on the back of the phone, with the main camera employing the skills of a 6-axis gimbal to smooth everything out. That partly explains why the camera lenses look so big.

It’s worth noting that the main camera protrudes a little more than the ultrawide camera, too, but we’re guessing that part of that is to support the gimbal.

While there’s a main and ultrawide camera, the downside of this arrangement is that there’s no telephoto, so the Zenfone 9 can’t compete with other models with that dedicated lens.

Where it can compete is through that main camera. It’s a Sony IMX 776 sensor and you’ll get great consistent shots in most conditions, with accurate colours and plenty of detail. There’s some inconsistency between the main and ultrawide camera – the latter producing darker photos.

Low light photography is pretty good, but noise does come creeping and things soften fairly rapidly. Using the camera doesn’t give you the sense that there’s a big AI machine in the background fixing everything for you.

The front camera will give a decent selfie, with accurate edge detection through the portrait mode to give those nice blurred backgrounds.

It struggles a little in lower light, losing detail and is much more likely to be blurry, so it’s not as competent as a phone like the Google Pixel 6a in this regard.

But it is autofocus, so can give you sharper images in the right conditions and this is always an advantage over fixed focus front cameras.

Video offers a wide selection of options, but the HyperSteady stabilisation is limited to 1080p – so you can’t get access to the top stability on 4K or 8K video capture.

We’ve found that video to be great though, with some great colours and fluid stability when you’re using HyperSteady – although there’s still some noise when the light drops.

Overall, however, it’s hard to really point to any particular faults with the camera.

As a point-and-shoot phone, it works really well, while there are additional modes and options if you want to take things a little further.

The software on the Zenfone 9 at launch is Android 12, customised with Asus’ ZenUI. That adds tweaks and changes to the experience so you’ll see a visual difference around areas like the settings and menus.

The one positive we’ve found in ZenUI is the direct toggle for Wi-Fi in the quick settings – which stock Android seems to have sullied – so if you’re regularly switching off Wi-Fi, it’s super easy on this phone. 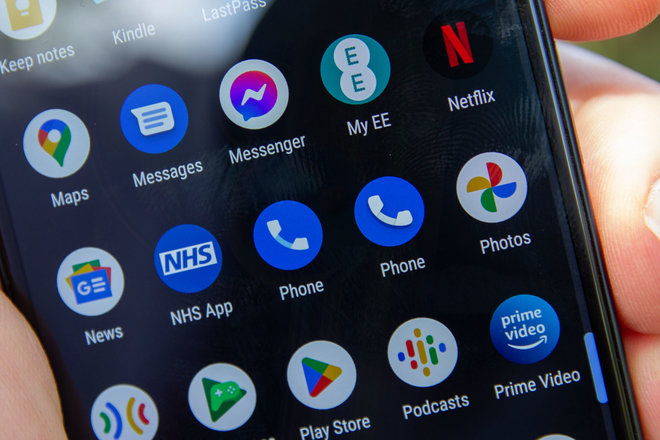 But elsewhere, we see the classic symptoms of an Android skin making things messy. There’s duplication of apps and Asus chooses to use icons that are almost identical to Google’s core apps – especially for the phone, messages, contacts, calculator and clock.

You can’t remove these apps and they don’t add anything to the experience if you’re using Google’s services (which customers outside China will be), so this is one area where Asus stumbles. 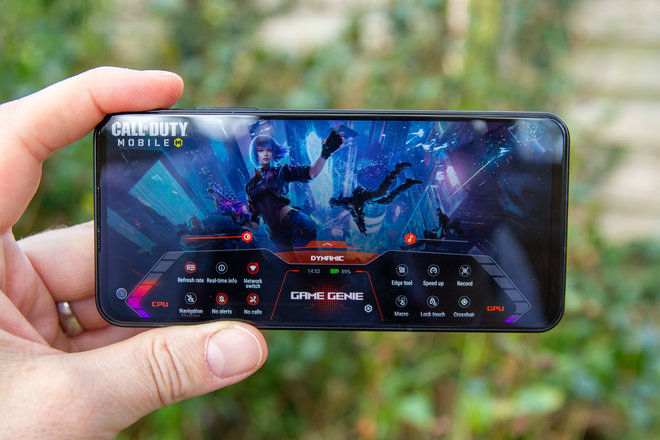 Otherwise, we’ve found the UI to be fast and fluid. If you’re a gamer then the Game Genie is great, with a dashboard you can access in-game to control important things like navigation blocking and so on. It works really well, drawing on experience gained through Asus’ ROG phones.

There’s one other downside though. Asus is only offering two Android OS updates and 2 years of security updates. This is well behind the likes of Google or Samsung, who will effectively support your device for double the length of time.