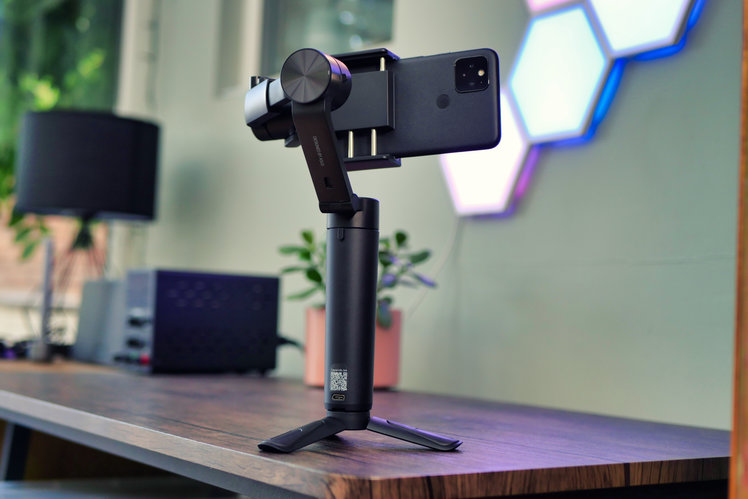 When smartphone gimbals first hit the scene, they were a bit of a gamechanger for mobile filmmakers – and we’ve seen a lot of developments in the technology in the time since.

With its ZenGimbal stabiliser, Asus is looking to get in on that action. But, since in-built image stabilisation is getting better with every generation of smartphones, is a gimbal as necessary as it once was?

And can Asus go toe-to-toe with pioneers like DJI, who has released no less than six iterations of its OM gimbal?

We’ve been testing the ZenGimbal and all of its many features in an effort to find out.

The ZenGimbal makes a good first impression, coming in a compact hard-shell carrying case that makes it easy to take with you on your travels.

Inside, you’ll find the folded-down gimbal, its mini tripod and a counterweight for offsetting heavier smartphones. 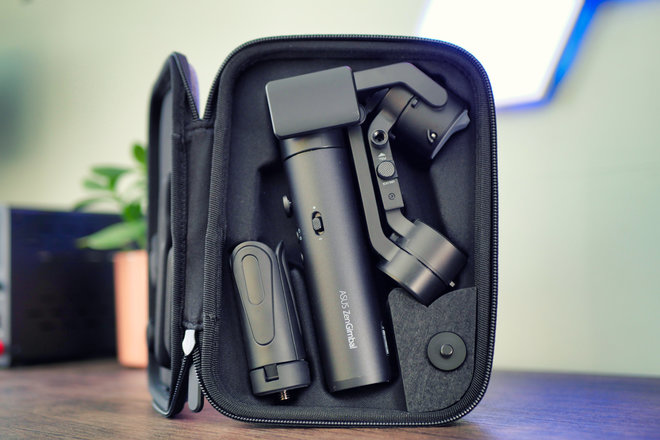 If the hard-shell case is too large for your needs, Asus handily provides an alternative draw-string pouch for transport, as well as an optional hand-strap and USB-C charging cable.

The gimbal itself has an attractive and minimalistic design, which might not be overly ergonomic, but it feels nice enough in the hand. It’s a little tricky to get your head around at first, but once you’ve learned the dance routine, it’s very quick and easy to get set up and packed down. 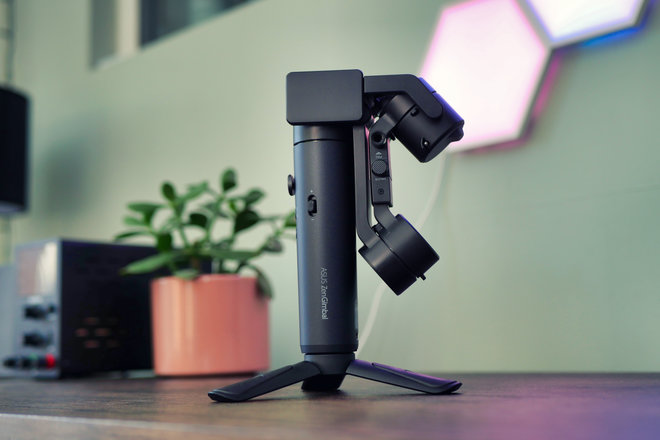 On the handle, you’ll find a joystick, mode button, zoom slider and a multi-function power and record button. There are three LEDs which help to check which mode you’re operating in, this is handy if you’re using the gimbal with a third-party camera app.

On one of the motors, there’s an LED tally light that illuminates when the phone is recording. This mainly comes into play if you’re using the rear cameras to record a selfie, as you won’t be able to see the screen, and we thought it was a nice touch. 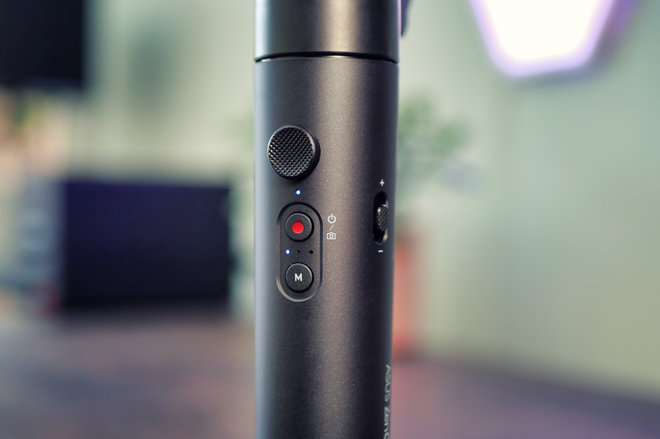 Its closest competitor is the DJI OM 4 SE, which can often be found around the same price point.

Comparatively, the ZenGimbal is a little heavier and folds down into a slightly bulkier form factor, but not to a degree that would bother most users.

However, the OM 4 SE gets pretty wild with its design and use of magnets, while the ZenGimbal is far more reserved. In fact, the design is very reminiscent of the original DJI Osmo Mobile, so you might even call it old-fashioned, at this point.

The majority of our testing was done with Google Pixel 5 mounted to the ZenGimbal, which made for a nice lightweight setup that was convenient for taking out and about.

However, we also made sure to test with the largest and heaviest phone we had to hand, which was the Black Shark 5 Pro. 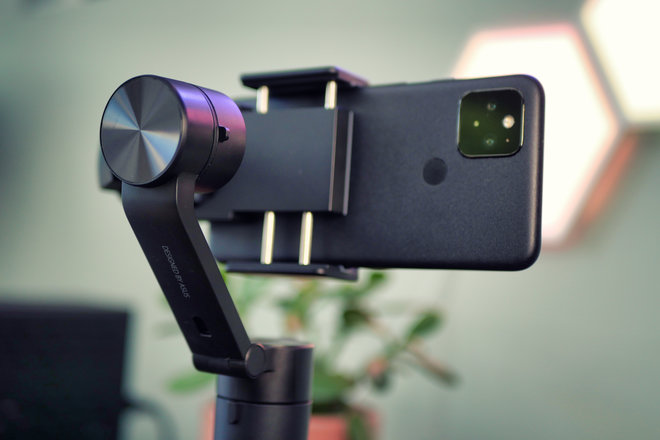 The larger phone required the counterweight to be added, but when in place the gimbal performed just as well as with the lightweight Pixel. We’ve got no doubts about its ability to handle the more popular heavyweights like the iPhone 13 Pro Max.

Once it’s well balanced, the ZenGimbal does a great job of stabilising movement. It pans and tilts smoothly and predictably in Follow Mode or POV shooting. There’s a good range of motion on offer, too.

It’s extremely easy to flip the gimbal for under-slung low-angle shots, thanks to the huge range on the tilt axis, and you can spin infinitely on the pan axis. These are both advantages over its main rival, which is much more limited on both axes.

We found the options when using the joystick to be limiting. There are three speeds to choose from in the app, slow, moderate and fast – but for us, they’re all faster than we’d prefer.

There’s no analogue control either, so it operates at the same speed regardless of how gently you push the joystick. You can’t move diagonally either, just up, down, left or right. For us, this made the joystick effectively useless, as its movements are far too robotic for our tastes.

That’s not to say that the gimbal can’t move slowly and precisely, just that you’ll have to be in one of the Follow Modes to take advantage of it. Some people prefer to shoot in this way, so the joystick control may not matter so much, but it could certainly use improvement. 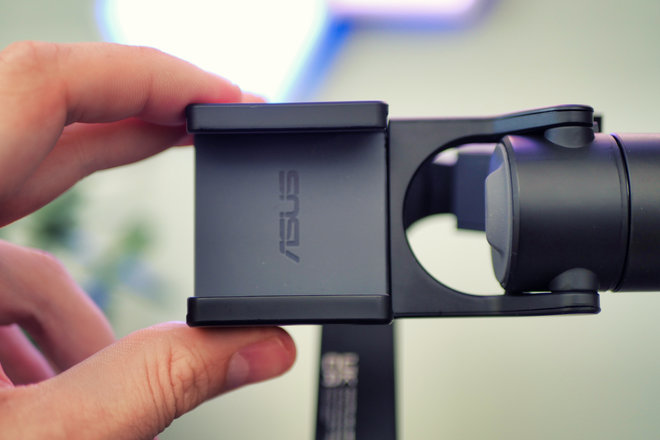 These days, a lot of content recorded on smartphones is destined for a platform like TikTok or Instagram, where the vertical format is king. Unfortunately, on this device, vertical shooting seems like a bit of an afterthought.

It only works when you’re holding the gimbal horizontally in a flashlight-style grip, and the motion is much more limited than when using the device in its standard configuration. As a consequence, the stabilisation, too, is less effective in this mode.

A problem that we’ve run into with all gimbal stabilisers is that unless you’ve fully perfected your Steadicam operator ninja walk, you’re always going to see some bouncing up and down as you move.

The same is true here, and with in-device stabilisation getting so good on modern smartphones, the improvement you get from using a gimbal is in the realm of 10-20 per cent. Whether that’s enough for you depends on your goals, but for casual users, it’s often not worth the hassle. 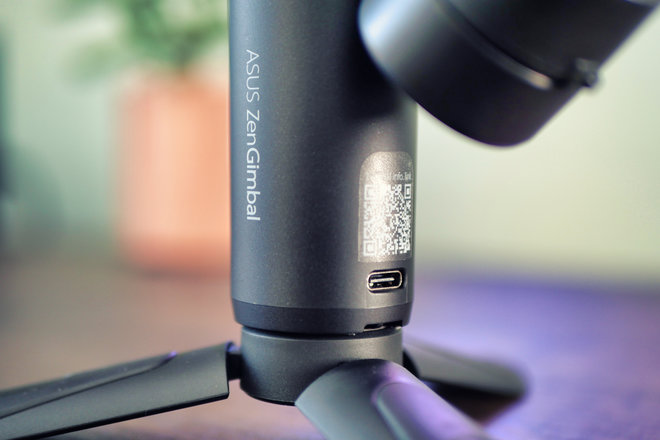 Battery life is advertised as 10 hours, and it’ll charge back up in 2.5 hours.

This is better battery life than the more expensive DJI OM 5, but less than that offered by the OM 4. In any case, it was sufficient for our needs and will outlast most shoots.

The gimbal connects to an app called Asus Shot, which allows you to access many of its features. The app is intuitive and easy to use, but it lacks some of the polish and more advanced features of its competitors. 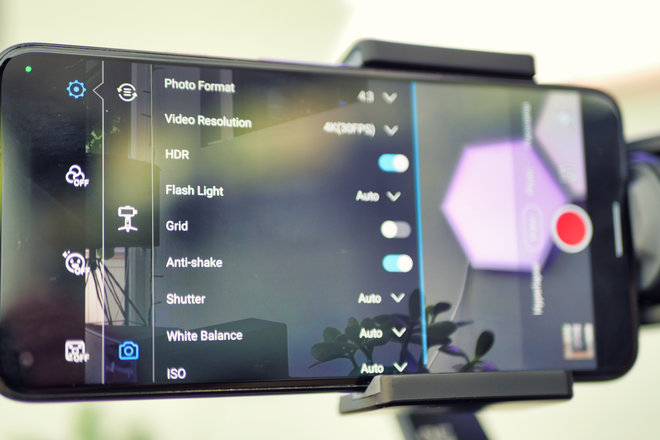 There are some novel additions like the ability to create a dolly-zoom vertigo effect and filters to add stylistic colour to your shots. There are also beauty filters which are pretty basic, and essentially just blur your skin and lighten your face.

More interestingly, the app allows you to access the tracking modes and you can select either face tracking or object tracking. The face tracking works very well and combined with the gimbal’s 360-degree panning abilities it allows for some versatile self-filming.

What we didn’t like so much, though, is that the gimbal centres your face in the frame, resulting in a lot of unnecessary headroom, and there’s no way to adjust this. 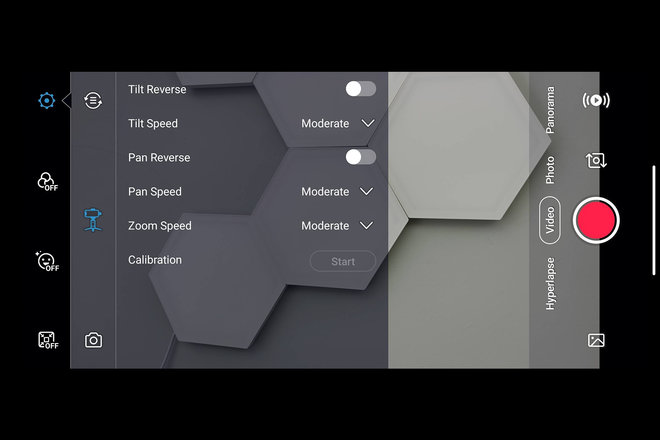 The object tracker works in the same way but is a little less reliable. If you select a large object with a contrasty colour, then it’ll work decently, but don’t expect it to keep track of a pet or anything that moves quickly.

You can record hyperlapses in the app, and set points for automated motion, which we were happy to see. This is one of the ways we’ve enjoyed using gimbals the most in the past.

Unfortunately, there’s no proper time-lapse option, though. It’s video-based rather than combining photos, so you can’t record light trails or motion blurs. We’d really like to see this added in future updates as it’s only the software that’s limiting it. 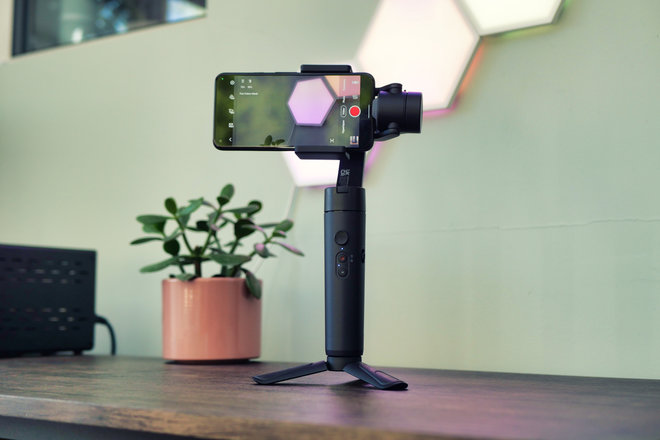 The gimbal can do something Asus calls Vortex Mode, in which the gimbal is held horizontally, and the camera spins 360 degrees.

It’s a neat effect, similar to the one seen in the movie Inception, but once the novelty wears off it’s of limited use. Interestingly, this worked flawlessly with the heavy Black Shark phone but didn’t work with the lightweight Pixel 5.

Finally, there’s a wide-angle mode, which flips the phone around to keep the roll motor from interrupting your footage. This is a great addition, especially as wide-angle shots have a tendency to look smoother than longer focal lengths, further enhancing the stabilisation.

We couldn’t access the wide-angle cameras from within the Asus app on either phone we tested, though, so had to switch to the standard camera app.