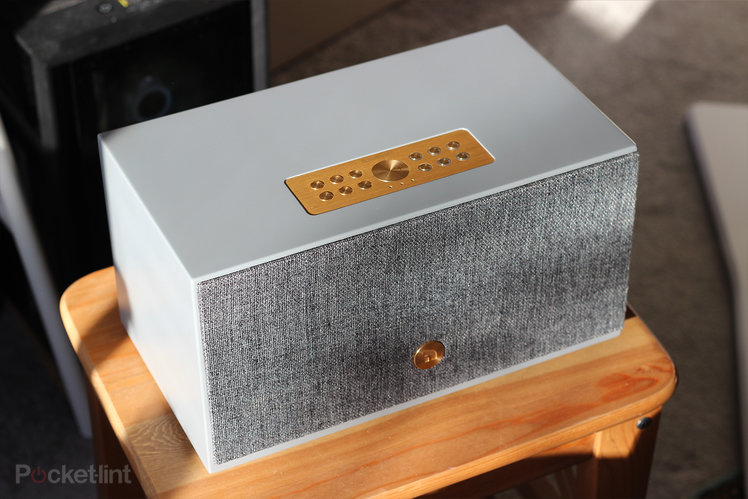 When you’ve a manufacturer that’s already made a superb speaker, there aren’t always a clear and obvious set of ways to improve it. But adding a few more convenient means to connect wirelessly and getting it out the door is more than OK in our books.

Which is exactly what Audio Pro has done with the C10 MkII speaker. It’s a cracking example of how to subtly improve a classic, with the only loss in the updated model being the fun carry-handle – that might have divided people’s taste anyway – that featured on the original.

The Audio Pro C10 MkII version sounds just as excellent as ever, however, and it’s even more convenient than before. Here’s what we make of it:

The world of home speakers is a crowded one, with smart speakers from the likes of Amazon and Google vying for shelf space by offering voice assistants and other tie-ins, but we still find that a lot of mainstream speakers look, at best, pretty generic. 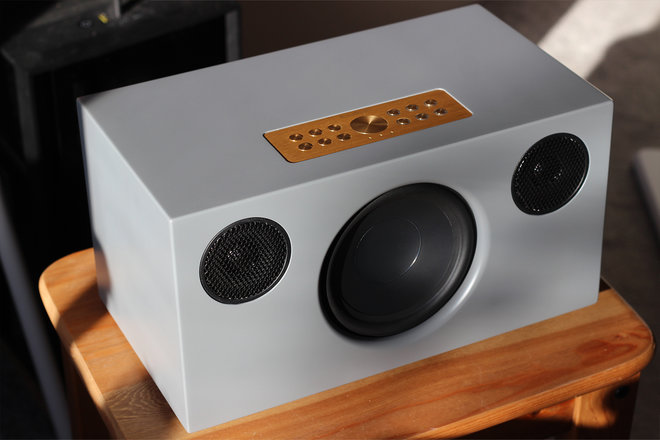 That’s where we’ll start with the C10 MkII: we really like how this speaker looks, compared to the average. It’s chunky and heavy and makes no secret of its purpose, whether you have it in the grey version (as we tested), or the black or white alternatives.

With a control panel that’s presented in a contrasting metallic finish, there’s a touch of reserve to the speaker, but that mostly applies when you have its optional grille attached, leaving it with a fabric-covered retro look.

Remove that grille – which is super easy to do thanks to magnetised points of contact – and you’ll transform the speaker into a way more modern and functional piece, giving a more statement look. The main driver and two tweeters are there for all to see, proud and loud. 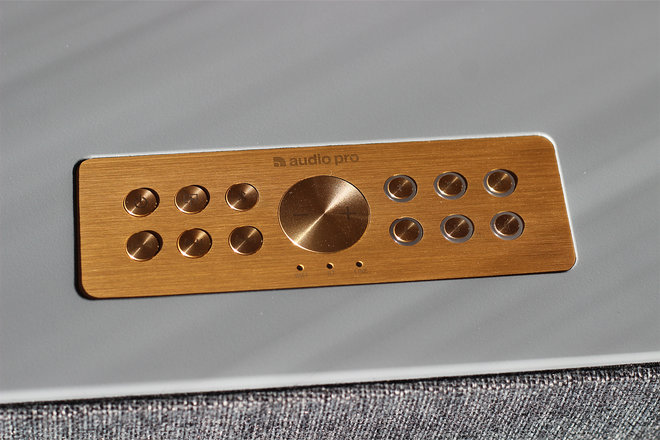 It’s a credit to Audio Pro that we could never really decide which of the two looks we preferred – both suited some moods perfectly, so we swapped between them often, which isn’t something that can be said for most speakers on the market.

One small loss compared to the first C10 is the leather handle, which on the original model did help a lot with relocating your speaker. That said, without it the speaker looks more like a fixture and is easier to fit into certain spaces, so we can see why it got the axe.

The speaker is also superbly well-made:: nothing flexes, there’s no movement as you push buttons; the materials chosen – whether metal or heavy-duty plastic – also have a weightiness that’s pleasant to interact with, suggesting this speaker can be relied upon on the durability front.

If looking good was all a speaker had to do then things would be pretty easy. Instead, it’s more about how they sound – but Audio Pro has thankfully repeated the impressive work exhibited in the first version of this speaker. 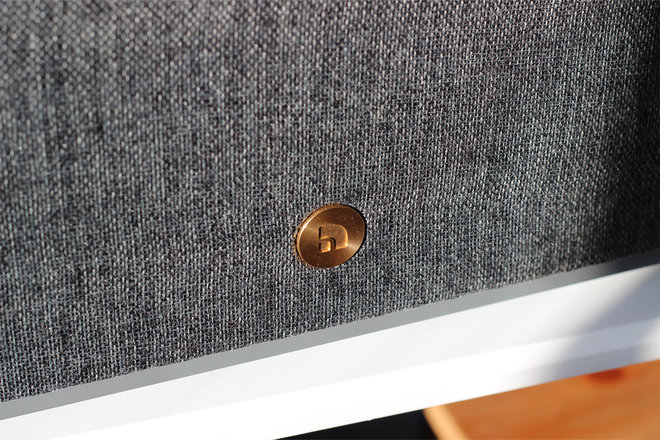 There are some small improvements, according to its documentation, in particular an updated bass port that does make the low-end a little richer. That contributes to sound performance that will be perfect for most people.

Although it has funky looks, the presentation of sound isn’t anywhere nearly as outlandish: it’s just really warm, balanced and precise. That makes it easy to pick out instruments and tracks within your songs of choice during a listening session.

Sticking on some Etta James, we were pleased by the richness of the playback, with more than enough delicacy to let quieter passages shine, and that stayed true as we moved through to more modern choices like the bassier Alt-J tracks of recent years. 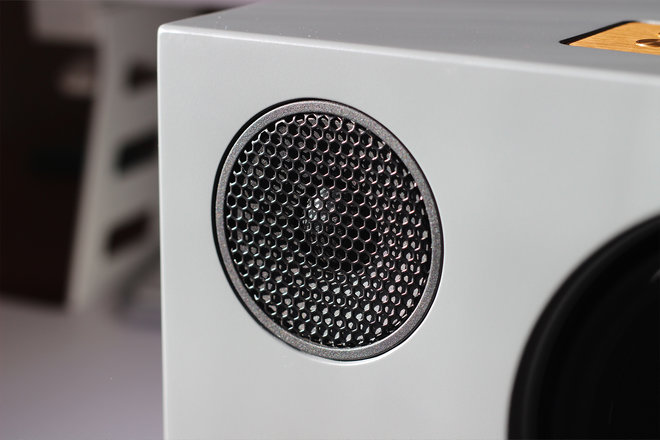 For those who like precision and don’t want something to simply blare out tunes for a loud party, we think this is a great choice that’s perfect for more relaxed home listening sessions, and the sort of background playlist that has guests perking their ears up at how nice the tracks sound.

The biggest upgrade from the first C10, in our opinion, comes when you start to actually play your music back to the MkII. While you’ve still got the option of wired playback thanks to its RCA ports (and a subwoofer output to let you boost the bass further), wireless connectivity has got some great tweaks. 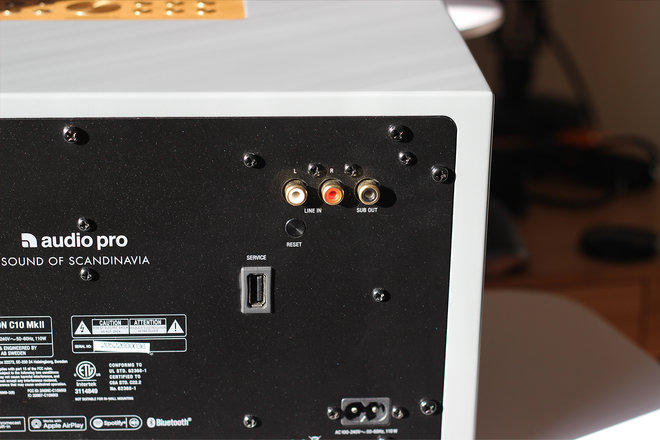 In the main, Apple Airplay 2 and Google Chromecast are both now built into the speaker, making for connections from iOS and Android devices that are trivially easy to setup. Getting your music from your phone is broadly as simple as selecting the right output when you’re near your powered-on speaker.

Connecting the C10 MkII to our Wi-Fi was easily done with Audio Pro’s serviceable (if not particularly amazing) app, from which we were able to use Spotify Connect without any hitches. Adding the speaker to a multi-room setup is similarly easy via any of those avenues.

The speaker doesn’t have microphones built-in for voice control, though, and the tighter integration with Google has come at the cost of compatibility with Amazon Alexa, which may ward off those committed to Amazon’s voice assistant, but we don’t have any issue with a speaker opting to swerve on-board voice commands (besides, you can always use your phone). 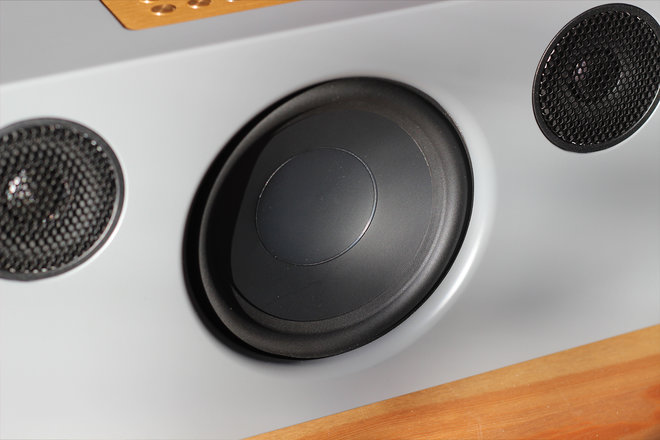 The additions are quite major improvements on what was available last time out, adding up to a really solid swathe of options, with standard Bluetooth very much there as a backup in case you need it or a guest wants to stream to the speaker.