Battle.net launcher is not working or opening on some of the Windows 11/10 computers and gamers are a little worried as they can’t run Blizzard games anymore. If you are one of those gamers having this issue then this post can help you to resolve it. In this article, we are going to see some easy ways to fix the issue. 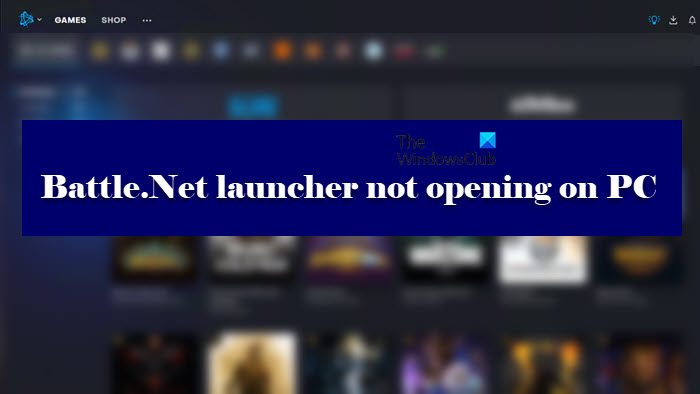 Why is Battle.Net not working?

Battle.Net not working means a lot of different things, and hence, can have a lot of different reasons. If it’s not opening on your computer, then a very potent reason can be the lack of permissions. Sometimes, Battle.Net requires administrative privileges, you need to give it that in order to run the app. It can also fail to open because of some glitch or because of corrupted caches. If it’s not connecting or the download speed is slow, you need to check your Internet connection. Your Internet should be reliable and must not fluctuate. You should check our detailed guide to resolve the connection issue in Battle.net.

Battle.Net launcher not opening or working on PC

Is Battle.Net launcher not opening on your computer? If yes, then use these solutions to resolve the issue.

Starting with the first one.

Running Battle.net launcher as an administrator can surely help you to eradicate this issue. Doing so allow you to access games with administrative privileges. You can always right-click on the Battle.net shortcut and select Run as admin. But it is better to always open the app with these privileges. To do the same, the steps are as follows.

Restart Battle.net Launcher to see whether it is still not opening. Hopefully, this won’t be a problem anymore.

Corrupted cache files are one of the root causes for issues such as ‘not opening’, ‘crashing’, etc. What you can do is clear Launcher’s cache and Tools folders.
First of all, open Task Manager, and end these processes.

Look for the Battle.net Launcher folder, right-click on it and then select Delete.

Relaunch the Launcher and see if the issue still persists or not.

Some important files are not accessible due to third-party antivirus and firewall programs. Try disabling antivirus so that Battle.net Launcher will start without any trouble or you can also go for another option.
The ‘another option’ is allowing the Battle.net Launcher through the Firewall program. A very minimal and less time-consuming fix to get rid of the not opening issue.

If you have a third-party antivirus then you need to search how to whitelist in that specific antivirus, but if you are just using Windows Firewall, then see our guide to allow the app through firewall.

The issue can be because a third-party antivirus interferes with the working of your app. To confirm this and to know which is that app that’s causing the issue, you need to troubleshoot in Clean Boot. This way you can know the culprit and then decide what you want to do with it.

Blizard agent needs Secondary Logon service in order to run. So, you need to check and make sure that it’s enabled if you are failing to launch Battle.net.

If the service, is enabled, then try restarting it and see if the issue persists. Hopefully, this will resolve the problem.

Hopefully, you are able to enjoy games on Battle.Net.

How do I install Blizzard Launcher?

Battle.Net is Blizzard’s launcher. To install it on your system, you first need to download it from battle.net. Then just click on the downloaded file, select a language of your choice, follow the on-screen instructions and you will be good to go.