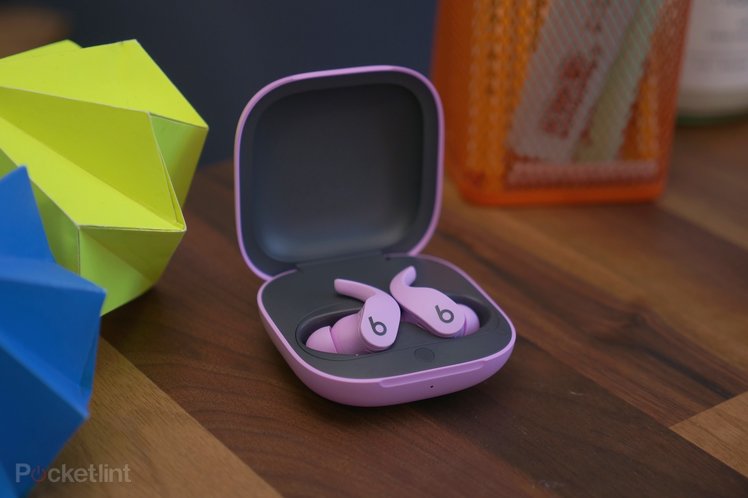 Beats’ first pair of true wireless buds – the Powerbeats Pro – was aimed purely at those who needed a long-lasting, great-sounding pair of ‘buds for workouts. Its second pair – the Studio Buds – was an affordable, convenient everyday pair of earphones. But what if Beats took the best bits of both and made it one product? That’s exactly where the Beats Fit Pro fits in.

The Fit Pro – which initially launched in the US in 2021, later for other regions – has a much more compact design than the Powerbeats Pro, features the convenience offered by Apple’s H1 chip, plus active noise-cancelling (ANC). On paper, that all sounds super, but what’s it like using the Beats Fit Pro for everyday listening and during workouts?

From a design perspective, you can immediately see where the Fit Pro has borrowed elements from both Powerbeats Pro and the Studio Buds.

The charging case is like a miniature version of the clamshell case that comes with the Powerbeats. It’s a much more compact version that’s easy to carry around and nice to hold though, thanks to its soft curves and matte soft-finished plastic. 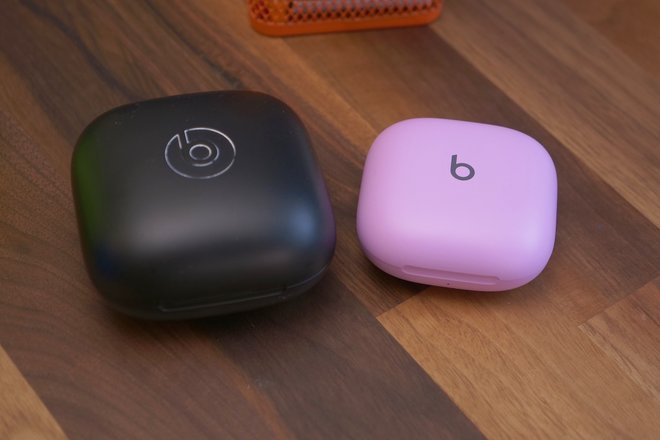 Our unit is finished in ‘Stone Purple’ (which is essentially a lilac pink), to match the colour of the ‘buds themselves. More importantly, though, is the fact that the case has a USB-C port for charging – rather than a Lightning port – meaning it’s a lot more convenient for non-iPhone users.

The Fit Pro has borrowed the shape and design of the Studio Buds, with the same rounded, compact inner area with a pill-shaped physical control on the outside. It’s a soft clicky button that lets you play, pause and skip tracks, and it clicks on the side furthest away from your ear canal, so you’re never putting pressure on the sensitive part of your ear.

There is one major change though: the wing tip. This soft, flexible fin sticks out of the end of the end cap, designed to hug the inside of your ear’s ridge to give you a secure yet comfortable fit. We certainly think it achieves that, having tested these ‘buds while out on running sessions and found the fit to be really secure – never once did it feel like they’d wriggle free. 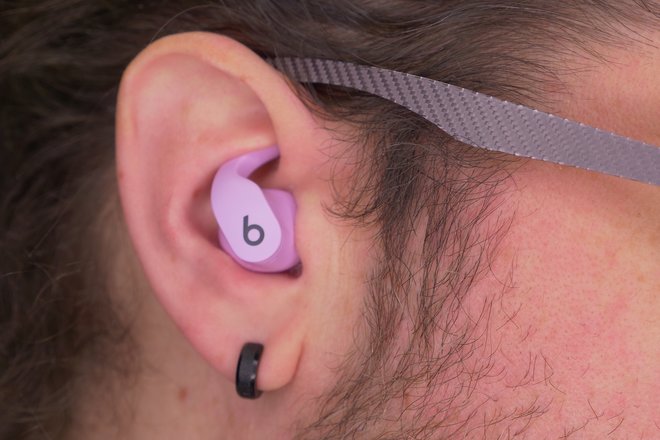 Part of this is down to the soft silicone ear tips, which come in three sizes. The fit with the default set was perfect for our ears, but the Beats app for Android has an ear fit test to help you get a decent fit. It plays music and uses an internal mic to detect if there are any gaps in the seal.

With IPX4 rating resistance, the ‘buds are designed to survive getting sweat and rain on them too. It’s relatively minimal splash resistance – so don’t go drenching them – but it should be enough water-proofing to get them through your workouts and outdoor sessions.

For the past couple of years, Beats’ focus has been on creating devices that suit users of both iPhone and Android. Unlike Apple’s AirPods, which feature a lot of the same tech, Beats’ platform is designed to be convenient for both sets of consumers.

Unlike the Studio Buds, however, the Fit Pro don’t have Google Fast Pair support. Although it does have one-touch pairing if you install the Beats app from the Google Play Store first. Once you have that installed and launched, all you do is open the case and you’ll get a handy pop-down window for quick-pairing on Android.

By comparison Apple iOS users do get a more feature-rich experience straight out of the box, especially if you have multiple Apple devices. Thanks to the H1 Chip, once these ‘buds are paired to your iPhone, they’re available to connect to from any other Mac, iPad, Apple Watch, Apple TV or iPhone that’s logged into the same iCloud account.

More impressive is that they seamlessly switch without you having to do anything. As an example, if you open up the Beats case while you’re using your Mac, put the ‘buds in your ears, then they’ll connect to the Mac. But then if you want to head out with your phone and listen to music, you just unlock your iPhone, open the music app, hit play and a connection is made in an instant. No messing with settings required. This level of convenience is only matched by Apple’s AirPods.

The H1 chip also opens the Beats up to a few other features, like Audio Sharing with other compatible Beats and AirPods products, plus voice-activated “Hey Siri” support. 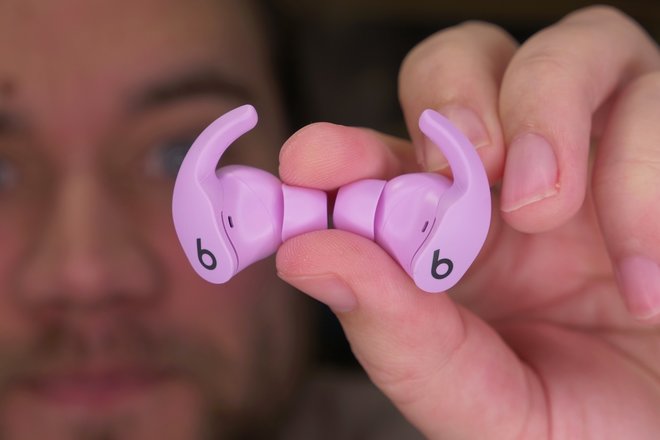 You do still get plenty of flexibility to control how you interact with the ‘buds through the Beats app on Android, however. For instance, you can check battery levels for the case/individual ‘buds. You can also customise what a long-press on the physical button does, and run the aforementioned fitting test.

Like any of the most convenient technologies, it’s the ones that work reliably, but invisibly in the background, that are the most impressive. In the case of the Fit Pro we found the in-ear detection to be one standout feature. In the Fit Pro, it seems virtually flawless: remove an earbud from your ear and any audio or video playing will immediately pause; place it back in, and the content resumes straight away. There’s no waiting, no instances of it failing to resume when the earbud is placed back in the ear.

Add to that the ability for each ‘bud to work completely independently of the other, and it makes for a super convenient pair of in-ears. 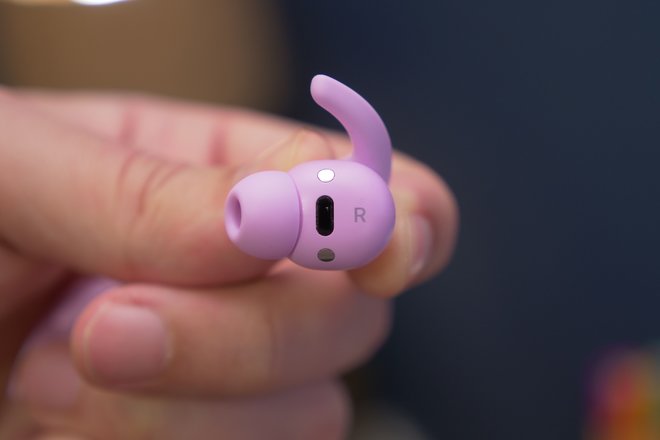 One feature you’ll either love or hate is compatibility with Apple Music’s Spatial Audio feature which adds a greater feeling of space to music (that has been optimised for it). It means rather than just feeling like you have music in left and right stereo, it also feels like music is around you, in front of you and behind you. How effective it is depends entirely on the mix.

If you’re an Apple user you’ll also get dynamic head tracking, which is really cool. Using accelerometers in the ‘buds, it can adjust the direction of the music (or audio from the movie/TV show) to make it feel like it’s always coming from the same direction. So, if you’re sitting in bed with your iPad in front of you, and turn your head to look left, the audio gradually moves over to the right ear to keep it sounding like it’s coming from the same location. Sadly, this feature doesn’t work on Android.

As battery life goes, the Fit Pro performs solidly. It’s not necessarily market leading, but with more than 24 hours of listening time (that’s including the case’s battery) it matches the industry standard – and that’s with active noise-cancelling (ANC) switched on. The ‘buds can go even longer if you switch ANC off and have them playing music in their ‘Adaptive EQ’ mode. With seven hours of playback, and three full charges in the case, there’s the ability to go up to 28 hours in total. Those figures are provided from lab tests where music is played at 50 per cent volume though. Real-world use rarely matches those conditions. 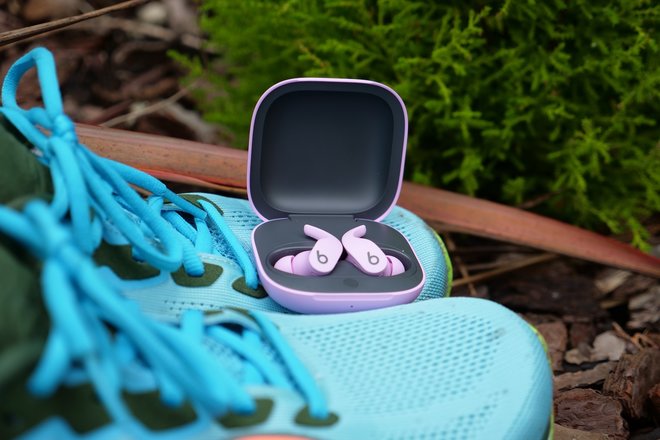 However, in our usage, we’d say the Fit Pro has been more than reliable enough. In one listening session of near enough two hours the battery dropped around 20 per cent from full, with the ANC switched off. That means you’ll comfortably be able to do your work commute all week long and still probably not run out of juice completely.

The one area we found the Fit Pro not to perform amazingly well is with Bluetooth range. Most ‘buds we test can stay connected to the source and continue playing music even when moving to the next room momentarily. The Fit Pro doesn’t seem to like going more than a few metres away from its source – as tested on iPhone, Mac, and Android – causing audio to start breaking up.

The only other negative is that there’s no wireless charging here. Despite the case being big enough to hold the technology (so many similar/smaller cases do on other products), Beats opted not to add that convenience.

Since being bought by Apple, Beats has moved a long way in terms of sound quality. Rather than make sound that’s overly bass-heavy, the company’s most recent products have featured much more balanced audio. Not balanced in the way a studio engineer might like for a neutral sound, but far more enjoyable and cleaner than it was a few years back. 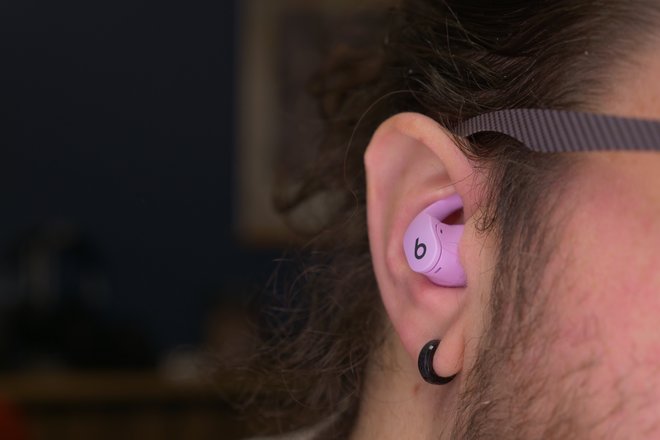 Being ‘buds that are supposed to be enjoyed on the move, in the gym and in the office, there’s still plenty of bass delivery though. It just doesn’t overpower the mids and highs, while low bass retains some texture and detail without blowing up into a boomy, shapeless sound.

It’s a great listen for anything that has a deep, rhythmic beat driving the song, which is exactly what you want when out on a run, or working through your reps in the gym.

Noice cancelling plays a big part in the sound too, and the versatility of Beats’ ANC system means it’s great in any environment. In gyms where there’s often lots of noise you want to block out, you can enable ANC and get a really decent seal, pump up the volume and just concentrate on yourself. 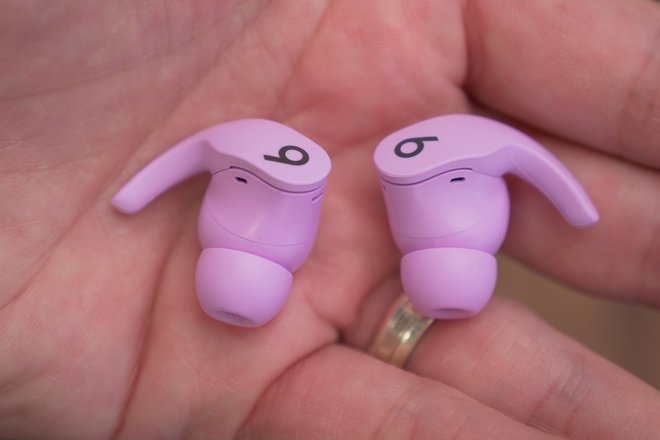 If you’re out cycling or running on roads, however, you want the opposite. You can easily switch transparency mode on, though, which lets you hear what’s happening around you. It’s really effective, without tarnishing the music experience too much. What’s more, we didn’t suffer from any wind-tearing sounds while out on runs.

The Beats Fit Pro are equally adept during voice or video calls. We used them a number of times during our testing period during video conferences and voice audio is clear. The beam-forming mics clearly do an effective job of ensuring ambient noise is kept to a minimum.