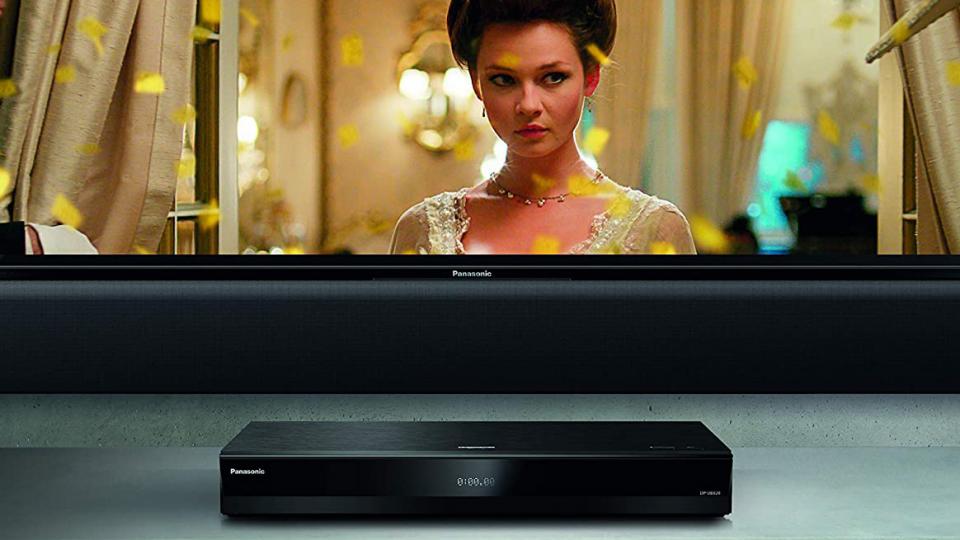 Want to enjoy your favourite movies in glorious 4K? These are the best 4K Blu-ray players around

You might be wondering whether a 4K Blu-ray player is worth it now that most streaming services are available in 4K. The likes of Netflix and Amazon Prime Video have come a long way, but the difference in picture and sound quality between the latest 4K HDR discs and even the best-quality streaming services is still significant.

4K Blu-ray players have admittedly become more niche due to the convenience of 4K HDR streaming, but it’s well worth buying one because of the enhanced quality alone. Moreover, when you buy a 4K Blu-ray disc you know you’ll always have it, whereas streaming services remove films from their catalogues all the time.

So which player do you choose? In this article, you’ll find our pick of the best 4K/UHD Blu-ray players you can currently buy in the UK. If you’re not sure which features you need, and which buzzwords you need to know, then have a read of our handy buyer’s guide below. Already know your HLG from your Dolby Vision and your 12-bit from your True HD? Feel free to skip the guide and jump straight into our bite-sized reviews of the best 4K UHD Blu-ray players.

READ NEXT: The best 4K HDR TVs you can buy

This might seem obvious, but the playback resolution sets the two apart. A standard Blu-ray player can only play standard Blu-ray discs in Full HD (or FHD) 1,920 x 1,080 resolution, while you’ll need a 4K Blu-ray player if you want to view 4K (aka UHD or Ultra HD) discs in 3,840 x 2,160 resolution. With four times as many pixels as a standard Full HD disc, 4K Blu-rays offer a dramatic increase in detail and colour fidelity which makes images appear much sharper and more refined.

Another important difference is HDR. 4K Blu-ray discs can contain HDR (High Dynamic Range) metadata to make most of your 4K HDR TV’s abilities, resulting in brighter, more realistic and impactful images. Another benefit is increased colour gamut, which means that movies can be reproduced with a wider, more intense palette of colour.

If you already have one, that’s great! But if not, you may want to head over to our roundup of the best 4K TVs you can buy. Even if your budget is tight there’s no need to worry; 4K TVs have become much more accessible since they first hit the market and now you can pick up a decent-sized quality 4K television for under £400. Should you happen to have the spare cash, the list does include some (much) pricier luxury options as well.

Can I play a standard Blu-ray on a 4K Blu-ray player?

Yes, 4K Blu-ray players have comprehensive backwards compatibility so you can still enjoy everything in your existing collection. In addition to 4K Blu-ray discs, 4K Blu-ray players will play standard Blu-ray discs, DVDs and CDs too. In fact, your standard Blu-ray movies may end up looking even better than before when played on a 4K Blu-ray player thanks to the magic of upscaling, a process in which a video with a lower resolution such as Full HD (1080p) is upconverted to a higher resolution. The upscaled version won’t be as pretty as a native 4K Blu-ray, but it means that you don’t need to rush out and buy your movie collection from scratch.

What is HDR and why does it matter?

To put it simply – perhaps too simply – HDR (High Dynamic Range) is a set of standards that allow TVs to display more lifelike images, with brighter highlights, deeper dark tones and a much wider range of colours. Imagine a movie scene featuring a lit a candle in a darkened room: with the right home cinema setup, HDR allows the TV to reproduce the searing brightness and vibrant colours of the flame more realistically, while also displaying the subtlest details in the shadowy, inky black corners of the image.

The majority of 4K TVs produced today have some form of HDR and every single model we recommend in our best 4K TV roundup definitely does. That said, not all HDR-capable TVs are born equal. Cheaper models, for instance, don’t have the levels of contrast, brightness or colour depth to display HDR content at its finest. Additionally, they may lack the software and processing power to make the best use of the content, even if the TV itself is capable.

As is always the way with TV technology, there isn’t just one HDR format. Some are open-source, meaning anyone can use them, while others, like Dolby Vision, are licensed by a particular company. Here’s a list of the HDR formats you currently need to know about if you’re buying a 4K Blu-ray player or 4K TV:

If you want to know more about the various formats and how they work, read our What is HDR TV? piece for an in-depth explanation of all things HDR.

What audio formats should I look out for?

There are a staggering number of different surround sound standards that a 4K Blu-ray player – or indeed any home cinema device – might support. Dolby Digital, Dolby TrueHD, DTS HD Master Audio, Dolby Atmos, and DTS:X are just some of the formats you might encounter.

The good news is that the Blu-ray player isn’t really the limiting factor here. In most cases, you’ll want to simply select the bitstream option, which passes the untouched digital audio stream directly to another device further down the chain, such as a soundbar or a compatible home cinema amplifier.

You only need to concern yourself with audio format support if you plan on using the player’s analogue audio outputs or you want to output audio via optical or coaxial S/PDIF (instead of HDMI) to a device that can’t decode surround sound audio. In this case, however, note that you will lose some audio quality as S/PDIF has less bandwidth for audio signals than HDMI.

High-bandwidth Digital Content Protection (HDCP) is a technology designed to prevent consumers from illegally copying content, and HDCP 2.2 is the current standard that has to be met for 4K UHD content. To watch a 4K UHD Blu-ray, you’ll need to make sure that all your devices in the chain are HDCP 2.2 compliant. If one isn’t, such as your TV or soundbar, then you won’t be able to watch your movie at its maximum resolution. You probably don’t need to worry about HDCP 2.2 too much; it’s been around for a while so, unless your equipment is especially outdated, it shouldn’t be an issue.

What about HDMI? HDMI 2.1 is the latest iteration of the HDMI standard but HDMI 2.0 remains the most commonly used – for now, at least. HDMI 2.0 brought a few features that are essential for your viewing experience: 50Hz and 60Hz refresh rates at 4K; 10-bit and 12-bit colour depths; up to 32 channel audio at 1,536kHz sample rates; and dual-video streams for split-screen viewing.

If you’re planning to watch 4K HDR content, you’ll want to ensure that your TV and 4K Blu-ray player both have an HDMI 2.0 port – and no, you don’t need to buy an expensive cable, just one that’s rated as being HDMI 2.0 compliant.

The best 4K Blu-ray players you can buy 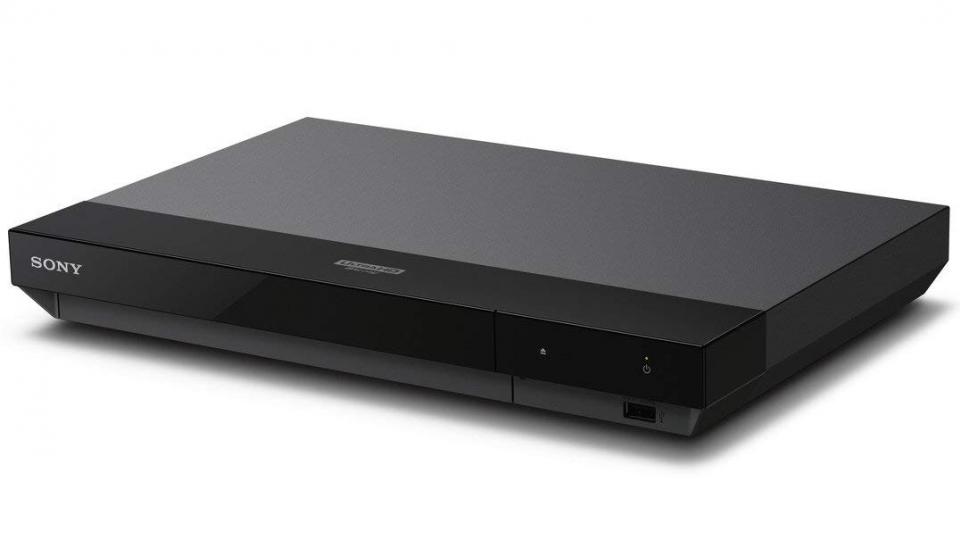 Considering its entry-level price, the Sony UBP-X700’s list of features is rather impressive. Most importantly, it has HDR support for both HDR10 and Dolby Vision, plus built-in 4K streaming for Netflix, Amazon Prime Video YouTube and more via Ethernet or built-in Wi-Fi. 4K discs look breathtakingly crisp and upscaled regular Blu-ray playback is fantastic. For connectivity, you’ve got two HDMI outputs, one that covers audio/video for your TV and one that’s purely for audio, giving you the flexibility to hook it up to your home surround sound setup.

There’s an HDR conversion feature for older 4K TVs that don’t support HDR, along with 1080p to 4K upscaling, SACD playback, 3D Blu-ray and up to 12-bit colour support. Finally, there’s that sleek, minimalist design; there’s no display – which some find distracting – and the front panel only has power and eject buttons. The panel itself drops down to reveal the cleverly concealed disc tray. 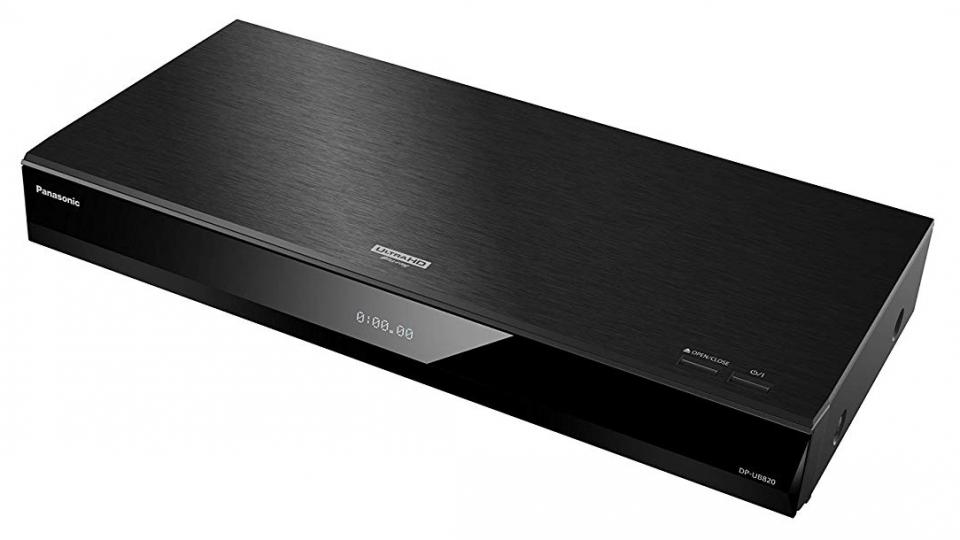 Don’t have the budget for the flagship Panasonic DP-UB9000? Don’t worry – you can find many of its strongest features in the mid-range DP-UB820. Like its pricier sibling, it supports the Dolby Vision and HDR10+ HDR formats plus Dolby Atmos, Dolby Digital 7.1 surround sound and DTS-HD audio. It even has the same HCX (Hollywood Cinema Experience) processor and HDR Optimizer technology, a neat feature that interprets HDR content based on your 4K HDR TV’s specific capabilities.

The DP-UB820 has both Ethernet and 802.11ac Wi-Fi connectivity along with a decent line-up of streaming apps such including Netflix and Amazon Prime Video, both of which offer 4K HDR playback. The DP-UB9000 may have the DP-UB820 beat on audio capabilities but, thanks to its phenomenal video quality and competitive price, the DP-UB820 is the better value option. 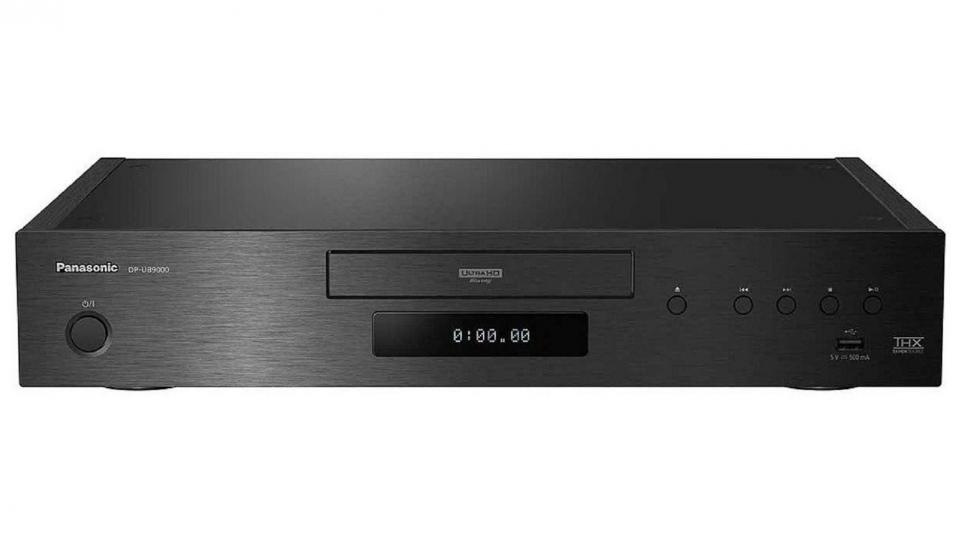 Panasonic’s flagship model has taken over from the now discontinued Oppo UDP-203 as the Blu-ray player of choice for serious home cinema aficionados. It has the kind of hi-fi-grade chassis that AV enthusiasts go nuts for, plus high-quality 768Hz/32-bit DACs, 7.1 channel analogue outputs and support for high-resolution file formats – though not DVD-Audio or SACD.

Its crowning feature is its Hollywood Cinema Experience (HCX) processor. This powers all kinds of colour processing and upsampling features designed to eke every last iota of image quality out of your 4K Blu-ray discs. One such feature is the HDR Optimiser, which optimises video content to match the capabilities of your TV or projector. With support for HDR10, HDR10+, Hybrid Log-Gamma and Dolby Vision plus unbeatable audio format coverage, Panasonic’s DP-UB9000 is the best 4K Blu-ray player you can buy – if you can stomach the hefty price tag. 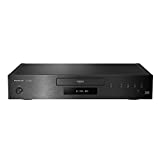 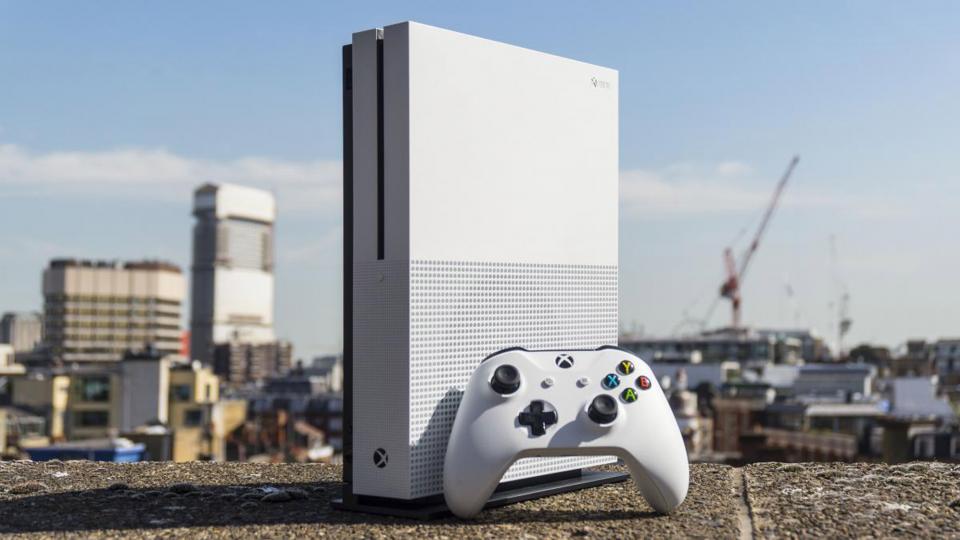 Although it’s no longer the cheapest way to play 4K UHD Blu-rays, the Xbox One S is still well worth grabbing if you happen to like gaming as much as you enjoy cinema. While hardly the console’s primary function, the Xbox One S is a perfectly respectable 4K Blu-ray player that can also stream 4K video from the likes of Netflix, Disney Plus and Amazon Prime Video, delivering excellent results in rich and vibrant HDR.

Of course, it’s also a fantastic games machine. It can’t run games at native 4K resolutions – you’ll need the more expensive Xbox One X for that – but it will upscale HD games to 4K, complete with HDR. It’s a cracking, great-value console that would be worth the money even if it didn’t have such robust AV credentials. Having one device that can play your favourite games plus all your beloved movies and TV shows is pretty convenient, to say the least.

Read our full Xbox One S review for more details 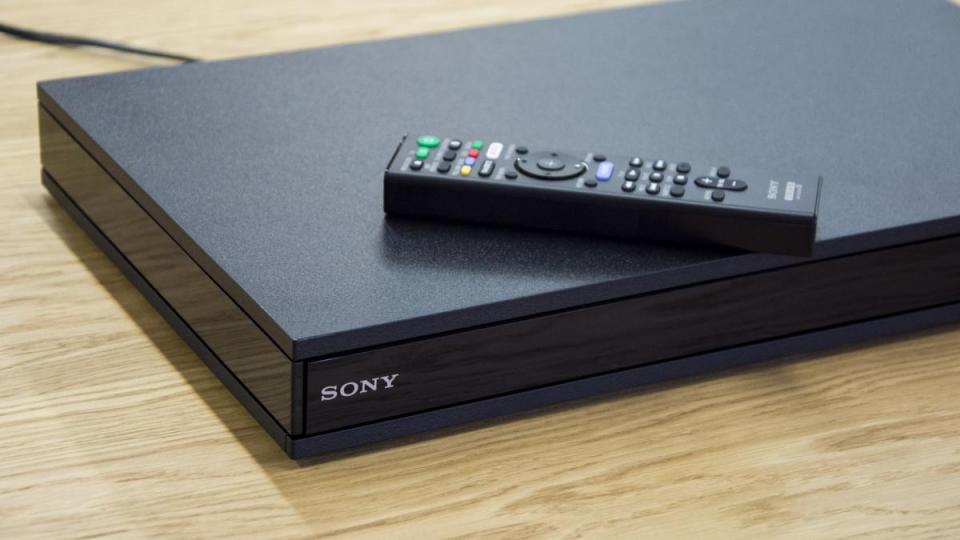 The Sony UBP-X800 ticks all the right boxes. It has incredible image quality, a straightforward user interface, a quiet disk loader and a clean, uncluttered look that will blend into any living room. And with proprietary LDAC Bluetooth technology that lets the player transmit a higher-quality stream to compatible Sony audio products, the UBP-X800 is an excellent multipurpose device. It supports bitstream, 24-bit audio from AAC and WAV to DSD 11.2MHz, making the UBP-X800 an excellent mid-priced choice for audiophiles.

4K video playback is excellent too, though, and a marked step up from the image quality of the Xbox One S. As far as HDR goes, it only supports HDR10 – the lack of Dolby Vision is a real shame, especially as the much cheaper Sony UBP-X700 does support it. That said, the user interface is among the best out there, and the simple yet effective remote makes it a pleasure to use. If you’re looking for an excellent 4K Blu-ray player, the Sony UBP-X800 provides fantastic value for money.