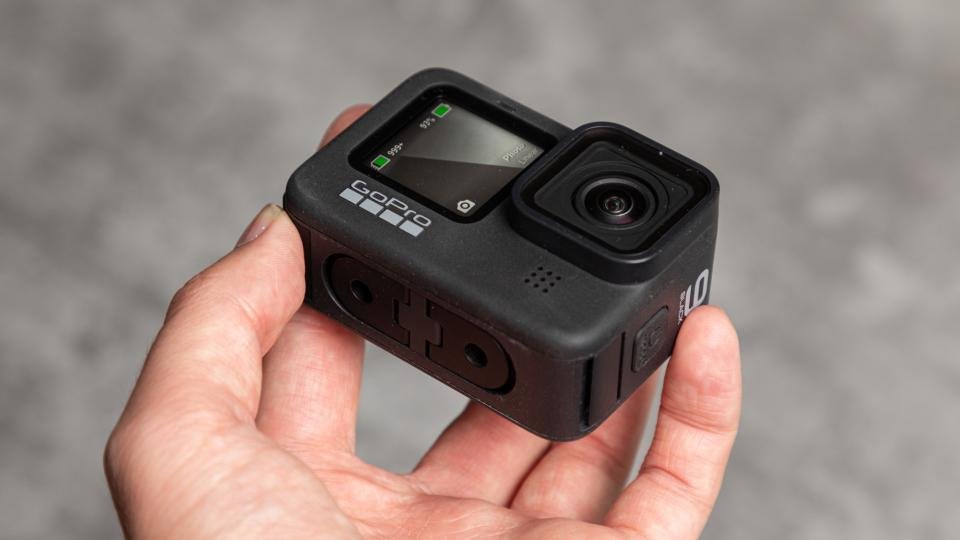 Confused about which GoPro is best? Here’s our comprehensive guide to the best GoPro cameras you can buy today

At its best, the GoPro is a fantastic piece of kit. These small and incredibly rugged little action cameras offer excellent-quality video and audio, and can often be had for a very reasonable price. And, while GoPro has built its reputation off of documenting some of the most extreme sports, their versatile line of cameras are just as at home with vloggers, commuters and holidaymakers.

If you’re new to GoPro action cameras, you’re probably taken aback by the sheer number of models available, but don’t panic: we’re here to help you choose the best GoPro for you.

If you’re a seasoned action camera veteran looking for a comprehensive list of the best GoPro action cameras on the market, feel free to scroll further down the page, where you’ll find our top picks. Newcomers, however, should start with our brief guide that explains how to buy the best GoPro for you.

Save on a new GoPro Hero 10 Black

The Hero 10 Black is GoPro’s most capable action camera yet, with an all-new processor, 5.3K60 video and HyperSmooth 4.0 stabilisation. While the Hero 10 Black usually retails for £480, right now you can pick one up bundled with a 32GB microSD card and a 12 month GoPro subscription for just £330.GoProNow £330Buy Now

Read next: The best GoPro deals

The best GoPro action cameras at a glance

How to choose the best GoPro for you

GoPro’s current lineup consists of the flagship Hero 10 Black, mid-range Hero 9 Black, entry-level Hero 8 Black and the dual-lens GoPro Max 360 camera. If you look hard enough you may still find older Hero 7 models too, which, although no longer cutting edge, can still provide plenty of bang for your buck.

When shopping for your ideal camera it can be worth bearing in mind that the best GoPro for you may not be the most expensive model or the one capable of recording at the highest resolutions or frame rates. The ability to film high bit-rate 4K footage might sound appealing but remember you have to have plenty of disk space to store the files and your laptop or PC needs plenty of power to process and edit the footage once you’re back at base.

Indeed, for most people, good-quality 1080p or 1440p footage still holds up well and it’s a lot easier to edit, move around and upload than 4K. The good news is that even the cheapest GoPro cameras can do that, with even the older Hero 7 Silver models capable of recording at 4K30.

These days all of GoPro’s cameras are natively waterproof right out of the box and come with built-in mounting prongs for quick and easy set-up.

The best GoPro cameras to buy in 2022 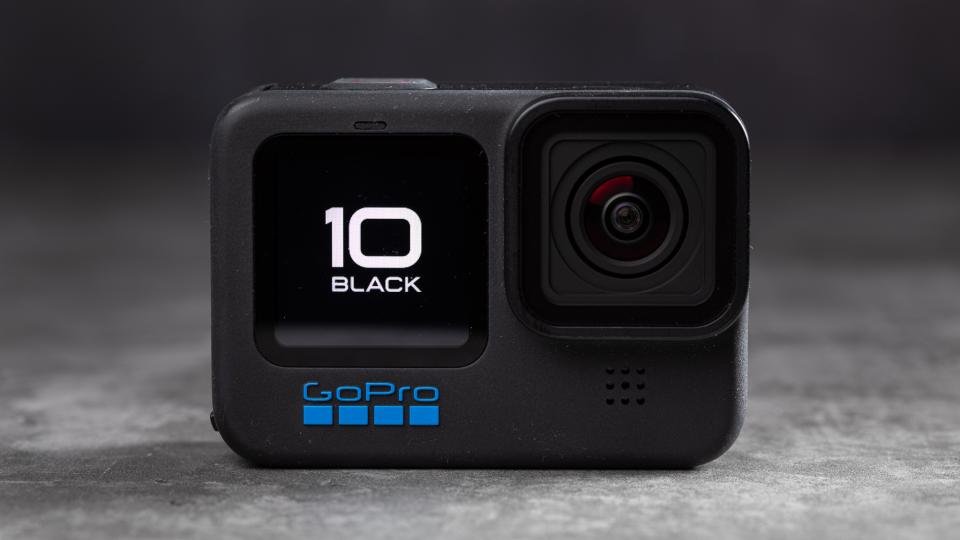 The Hero 10’s videos are punchy, detailed and thanks to GoPro’s stabilisation tech, super-smooth too. GoPro’s HyperSmooth 4.0 stabilisation is the most effective we’ve tested to date, producing smooth, fluid footage and taming the jerkiest of clips. Additionally, the Hero 10 features improved Horizon Leveling with up to 45 degrees of tilt correction, allowing you to keep your footage both steady and level.

The Hero 10 also comes with GoPro’s latest design refinements, offering both front and rear colour displays, an improved hydrophobic and scratch-resistant lens, as well as compatibility with GoPro’s ecosystem of accessory Mods.

The Hero 10 Black lists for £480 at online retailers including Amazon and Argos but can be picked up for £380 when bought direct, bundled with a 12-month GoPro subscription. 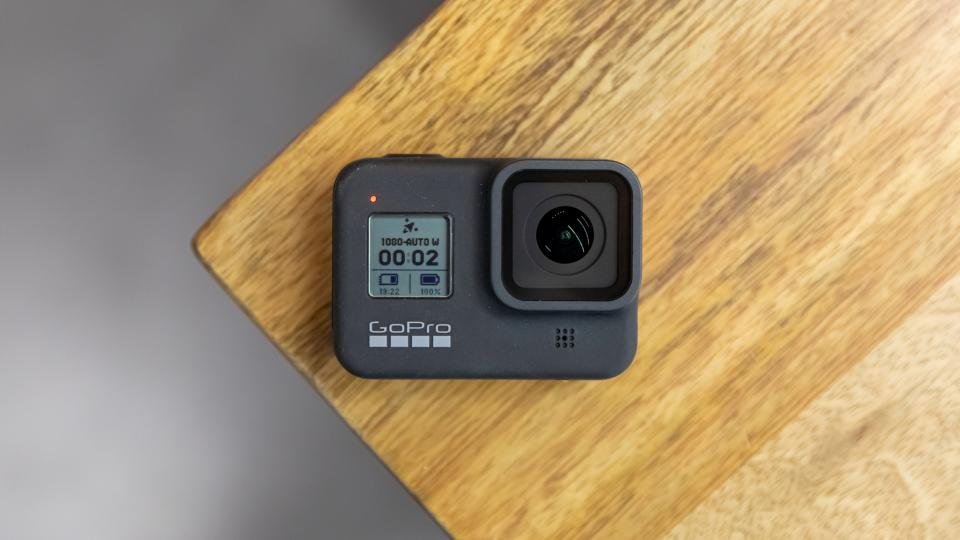 While it’s no longer flagship, if you can live without a front-facing screen or 5K recording capabilities, the Hero 8 Black is an excellent budget-friendly option. It records 4K60 videos, records clear, detailed audio, shoots 12-megapixel stills and packs GoPro’s smooth and effective HyperSmooth 2.0 stabilisation.

The Hero 8 Black is waterproof straight out of the box and has mounting prongs built right into the base, eliminating the need for a bulky external cage. For added versatility, it’s also compatible with a range of attachable Mods, allowing you to add microphones, ports, lights and even an external screen.

While the Hero 8 Black will set you back £340 at retail, like all cameras in GoPro’s current lineup, you can save by buying it bundled with a one year GoPro subscription for just £260. 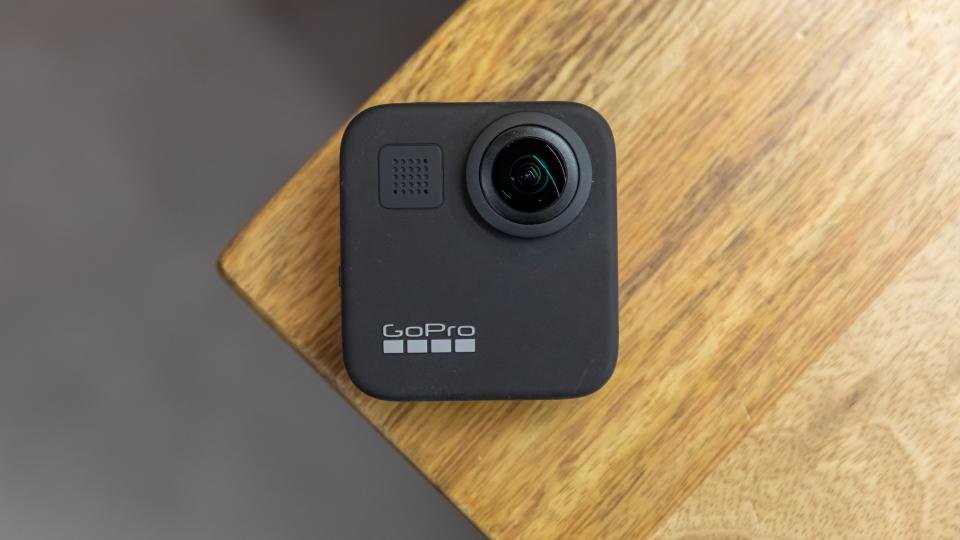 The GoPro Max is an action camera but not as you know it. With fisheye lenses mounted on the front and the back, it can shoot in all directions at once, including up and down.

While we’ve seen 360-degree cameras before, the GoPro Max takes things to another level, capturing superb-quality video and making the viewing and sharing the footage easier than ever. 360 videos are stitched automatically in-camera, you can then opt to upload the files to YouTube as interactive videos that users can pan and zoom around in, or “reframe” the footage using GoPro’s smartphone or desktop app. Reframing allows you to take your favourite angles from within the 360 clip and export them as standard video files – essentially, it’s like filming with multiple cameras at once.

For more traditional videos, you also have the option of using a single lens and engaging GoPro’s incredible Max HyperSmooth stabilisation. Max HyperSmooth is not only capable of keeping your footage incredibly stable but it also offers a full 360 degrees of Horizon Leveling correction, ensuring your videos remain perfectly level too.

With six onboard microphones and a large built-in touch screen, the GoPro Max is one of the cleverest and most flexible action cameras we’ve tested.

The GoPro Max ordinarily retails for £470, but if you buy direct from GoPro bundled with a 12-month GoPro subscription you can pick one up for £380. 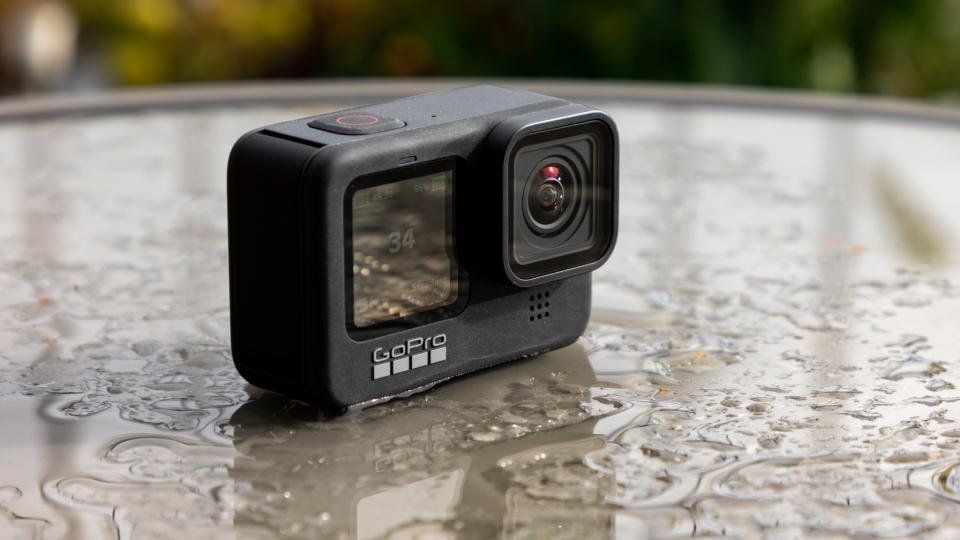 While it can’t quite match the flagship Hero 10 Black for outright image quality, the Hero 9 offers many of the same features at a slightly lower price point. It captures crisp, detailed video clips at up to 5K30, offers up to 8x slow-mo in 1080p and shoots 20-megapixel stills. It also packs some very effective stabilisation tech with HyperSmooth 3.0 available across all resolutions and frame rates, as well as up to 27 degrees of tilt correction through Horizon Leveling.

Design-wise it features GoPro’s latest refinements with both front and rear colour displays, built-in mounting prongs, an improved capacity battery and compatibility with GoPro’s accessory Mods. It’s can also be used with the Max Lens Mod, expanding its field of view out to an ultra-wide 155 degrees and unlocking Max HyperSmooth stabilisation.

While the GoPro Hero 9 retails for around £430, you can pick it up bundled with a one year GoPro subscription for £330 if you buy direct.