You are here: Home / Technology News / Best laptop for kids 2021: The best child-friendly notebooks for work and play Whether it’s for online learning and homework, or video streaming and games, these are the best laptops for kids

Ensuring your child or children have one of the best laptops for kids has become increasingly important during the global pandemic.

Most primary and secondary school children have been learning remotely for a significant proportion of the academic year, bringing into sharp focus the need for kid-friendly laptops cut out for home learning.

And despite children returning to school this month, it remains prudent to invest in one of the best laptops for kids. Letting your child use your device isn’t practical if you’re working from home, so in the long run, the smart choice is to buy them their own machine.

Selecting the best laptop for kids can be a tricky task, however, as you’ll want to weigh up price against features, usability and durability. Fortunately, we’ve got you covered. Below, you’ll find a buying guide detailing the key things to consider when buying a laptop for your child followed by a list of bitesize reviews of what we deem the best laptops for kids.

How to choose the best laptop for your child

Which laptop processor is best for children?

Given your child is unlikely to be performing too many demanding tasks on their laptop, having the fastest processor (CPU) around isn’t strictly necessary.

Intel’s lower-powered Atom and Celeron processors will do the job just fine but if you have the budget for an Intel Core i3 or i5 device, you will get improved performance. AMD’s Ryzen processors are a great alternative and are generally cheaper than their Intel counterparts.

How much RAM and storage does my child need?

In terms of RAM, 4GB will typically suffice for most kids, though 8GB is recommended if your child plans to do a spot of gaming once the school day is done.

As far as storage is concerned it’s important to look at both the type of storage as well as the amount on offer. It’s also really worth stretching to a laptop with a proper SSD (solid state drive). Mechanical hard disks are much slower and slow down over time and eMMC flash storage is also sluggish.

Although a child’s storage needs aren’t likely to be particularly high, you should ensure your new machine has at the very least a 64GB drive, with 128GB proving a nice sweet spot in terms of space and price. That’s assuming you’re looking at Windows 10-based machines. Windows 10’s minimum installation requirement is 32GB. Other operating systems – ChromeOS, for example – have lower storage requirements.

Which laptop operating system is best for kids?

A significant proportion of laptops run Windows 10. It’s the most popular operating system around and is simple to navigate and intuitive to use, making it a good choice for children.

Some cheaper laptops run a special version of Windows called Windows 10 in S mode. This offers the familiar Windows experience but only allows the download of applications from the Microsoft Store, while web browsing must be done via Microsoft Edge. The benefit is improved security – they’re less likely to become infected with malware – and performance since you can’t run legacy software on them. You can disable S mode at any time if you need to run non-Windows Store software but, once it’s disabled, you won’t be able to reactivate it.

Apple’s Mac OS is a popular choice for professionals and the company’s range of MacBooks are among some of the best laptops around. They don’t come cheap, though, and for that reason, we wouldn’t recommend them for children unless you’re really willing to splash out. The company’s range of iPads, which run iPadOS, are a far better choice for those with budgetary constraints, particularly if your kid has an iPhone and is familiar with iOS.

Perhaps the most prudent choice of operating system for a child-friendly laptop is Google’s Chrome OS, which comes pre-installed on all Chromebooks. Chrome OS stores data and applications in the Cloud rather than on your machine itself, meaning devices running it don’t require the hard drive space a Windows laptop would. Chrome OS itself has lower hardware requirements, too, so you can get away with as little as 16GB, although most come with more.

The OS plays well with online applications such as Google Sheets and Google Docs, so your child will have easy access to the tools they’ll need to complete work tasks effectively. If they plan on using their laptop for play as well as work, the Google Play Store allows the installation of Android apps. It’s also possible to install Linux on a Chromebook for those more adventurous children who are interested in getting into coding. Along with ease of use, the big advantage of Chrome OS laptops is their price – they’re typically a lot cheaper than their Windows or Mac rivals.

What is the best size of laptop for kids?

If your child is going to be transporting their laptop around with them, you don’t want the device to be too heavy. Generally, a laptop with a larger screen will be heavier, so avoid 15.6in and 17in devices unless having more screen real estate is something your kid is desperate for. A 13in or 14in device is ideal for most children, though younger kids may be better suited to a tablet or 2-in-1 with a 10.5in display.

The best laptops for kids 2021 If you like the tablet form factor but and are after a Windows system, look no further. Microsoft’s own Surface Go 2 is a fully-fledged Windows 10 laptop, with access to desktop apps and Windows’ parental controls. It comes pre-supplied in S mode, which means you can only install apps from the Microsoft Store – adding an extra layer of security. But it’s easy to switch to Windows 10 Home should you want to.

For video playback it features a bright, 10.5in display, which is slightly bigger than its 10in predecessor, two side-mounted speakers, and a rear kickstand, which lets you view the display at any angle you wish. While for working, the Microsoft Surface Go Signature Typecover keyboard is a particular highlight with decently sized back-lit keys and a large, responsive touchpad. Unfortunately, like the Apple iPad on our list, the keyboard doesn’t come as standard and will set you back an extra £99. While most Chromebooks look to court the lower end of the market, the Pixelbook Go is anything but a cutback device. Its slim, lightweight design makes it easy to grab and go, while its brilliant keyboard makes typing a breeze.

The standout feature is its incredible battery life. In testing, it lasted more than 14 hours on a single charge, making this a great option for keeping kids occupied while out and about.

As it’s a Chromebook, it runs Chrome OS rather than Windows 10 or macOS. It’ll handle any online task without issue, however, gives access to Google’s productivity apps, and you can even install Android apps on it via the Google Play Store. It isn’t compatible with Windows or Mac exclusive applications, though. The gorgeous little laptop is Microsoft’s lightest yet and perfect for youngsters making their first steps in the world of personal computers. The base model costs just £549 and houses a tenth-gen Intel Core i5 processor backed by 4GB RAM and 64GB storage. That may not be enough for adults using it as their primary work device but should be plenty for children whose usage is likely to be less power-hungry.

Build quality is extremely high and although the display is only 12.5in, the Surface Laptop Go features a full-sized keyboard and precision trackpad. Weighing just 1.11kg, it’s extremely portable, too, and there are both USB-A and USB-C ports meaning the two key connection standards are catered for. In our opinion, the best laptop for kids… is a tablet. Apple continually expands the capabilities of its iPads and, at this point, they truly are a viable alternative to the traditional laptop. The 10.2in variant is the cheapest in the range and is slim and lightweight, which makes it easy to take out and about, and its 12-hour plus battery life means you won’t be constantly looking for places to recharge.

The new 2020 eighth-generation model houses an improved processor in the form of the A12 Bionic and performance is as impressive as ever, with apps launching quickly and less demanding games running at smooth framerates. With access to Apple’s extensive ecosystem of applications for work and play, downloadable TV shows and movies, as well as e-books, the 10.2in iPad pretty much does it all. You will, however, have to take into account that if you need a keyboard you’re going to have to pay out a little extra. Apple’s own Smart Keyboard cover costs £159; alternatively, Logitech’s Slim Folio will set you back an extra £90. The wonderful new Apple Magic Keyboard isn’t compatible with it, though. 5. Chuwi HeroBook Pro Plus: Windows 10 on a budget Chuwi may not be a household name, but its HeroBook Pro Plus is well worth considering. It’s a fully-fledged Windows 10 machine capable of running all Windows compatible applications and is both compact and lightweight at just 1.2kg. The Intel Celeron J3455 processor powering it is rather sluggish but that’s to be expected given the laptop’s price and you can improve things by playing around in the settings.

The big selling point aside from its rock-bottom price tag is its 3K screen, which has a resolution of 3,200 x 1,800 pixels – something we never thought we see in a laptop so cheap. The IPS panel is of good quality, too, covering 92% of the sRGB colour space with reasonable accuracy.

The HeroBook Pro Plus makes some pretty big sacrifices to remain under the £300 mark but it’s a decent device for youngsters that don’t expect or need supreme performance from a laptop and parents that don’t want to have to break the bank to cater for their kid’s technological needs. Acer’s Chromebook 714 is a full-sized, budget-friendly Chrome OS option. The internal specifications are solid on the £500 model we’ve linked here, which is powered by an Intel Core i3 processor backed by 8GB RAM and comes with 128GB eMMC storage. With its all-metal chassis, the 714 looks very smart too, although the bottom plate doesn’t fit flush with the edges of the device.

The FHD 14in display is more than big enough for young users, looks sharp and has a matte finish that reduces glare, which is always beneficial. Colour performance isn’t great but given the range of activities your child is likely to use the laptop for, its 55.9% coverage of the sRGB colour gamut shouldn’t be a deal-breaker.

If you’re on the lookout for a laptop-sized Chromebook but don’t have the budget for the Pixelbook Go, the Acer Chromebook 714 is a capable and cost-effective alternative. 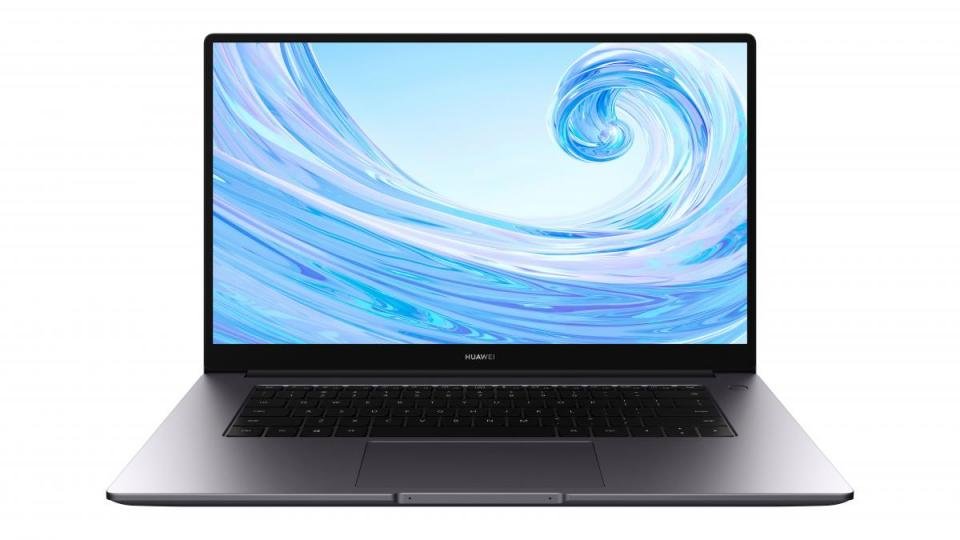 The Huawei MateBook D 15 is a great choice for older kids that require a bit more screen real estate or the benefits that come from a more powerful processor. The AMD Ryzen 5 3500U CPU is very nippy which makes performing the everyday tasks kids require a laptop for a breeze. It’s even capable of playing games at the laptop’s native 1080p resolution, though it will struggle if you try to play anything too strenuous on it. The matte 15.6in FHD display provides a large amount of screen for the money though colour accuracy is rather disappointing.

At 1.53kg, the MateBook D 15 isn’t as lightweight as some of the options on this list but the additional power it offers more than makes up for less impressive portability. Such power is very rare at such a reasonable price, making the Huawei MateBook D 15 an excellent laptop for tech-savvy youngsters ready for a slightly more robust device.