No Man’s Sky is one of the best games available right now. It began life in controversy when it first came out for Windows and the PlayStation 4 back in 2016. Since then, the game has arrived on other platforms such as the Xbox, but better yet, it has improved a lot. The developers have turned the ship around and transformed No Man’s Sky into a video game worth playing. Many of the issues have been fixed to the point where the game feels like a brand-new experience. This post lists some of the best No Man’s Sky Mods available for your Windows PC. 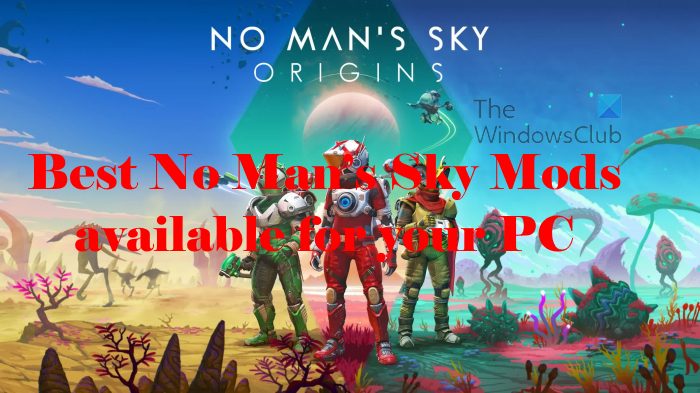 With the newfound popularity No Man’s Sky has garnered, folks have decided to create mods for the game. The question is, then, what are some of the best mods available right now for the game? Well, this is a difficult question to answer, but what we’ll do is discuss our favorites, and then you decide.

The game’s developers decided to force users to press and hold a button to perform several key actions in the game. This is not ideal, which is why the Fast Actions mod was created in a bid to make mundane tasks easier to get done than before.

Download the Fast Actions mod via NexusMods for free.

There are gamers out there who are not impressed where the looks of No Man’s Sky is concerned. If you fall in that category, then we suggest taking advantage of a mod known as Style Cell Shading Two. As the name suggests, it changes the looks of the game to something that is more akin to Borderlands. A perfect mod for those who prefer the cell shading look and feel in video games.

Are you annoyed by your Exosuit constantly making reminders? Worry not because you can easily download and install the Shutup mod. With this mod, players can disable individual sounds from their inventory in order to traverse the many planets without frequent alerts.

We like what No Man’s Sky has to offer, but seriously, why is space so boring? It’s almost an empty husk due to the lack of human players and sentient beings to interact with outside of traders. Now, to help solve this issue, folks can make use of the Busier Space mod that was designed to increase traffic in outer space.

This mod will deliver three times more trading spawns and planet fly-by when compared to the original game. There are even four times the fly-by spawns in outer space, along with an increase in the number of pirates. Furthermore, the number of space battles will go up as well, so if you want more action and less of a tranquil experience, then Busier Space mod is your friend.

The early trailers of No Man’s Sky showcased an ability for players to fly their spaceship close to the ground. Unfortunately, the final game did not bring this feature to the forefront along with many other things. The good news is, that there is a mod known as LowFlight, and it is all about giving players the ability to fly low to the ground and even crash their ship.

Gamers can also fly their spaceships underwater if they so wish, which is a nice touch in our humble opinion.

As we have mentioned above, space in No Man’s Sky is not that great, but it can be better. If you want space to look more like the space we know, then you should give the Deep Space mod a test drive. It aims to make space darker by removing unnecessary light and color. Not only that, but it also changes the looks of the sky on planets among other things.

Not everyone owns a powerful gaming computer that can handle anything thrown at it. If you’re in that category but want to play No Man’s Sky at any rate, then you need to download the Project Potato, a mod perfect for potato computers.

This impressive mod makes it possible for players to downgrade the resolution of the game. The mod also removes quite a few presets and effects among many other things. Once the mod is up and running, the game can perform at 30FPS on weak laptops.

Download the Project Potato mod from the NexusMods forum.

If you want to drastically change the look of No Man’s Sky, and if you love the look of 80s movies, then consider downloading a mod known as Retro ’80s binoculars. Great for those with a nostalgic taste.

Bear in mind it will only change the vision when using the binoculars/scanner. From our point of view, it’s quite creative and we like it very much.

Can you mod No Man’s Sky on PC?

Yes, the PC version of No Man’s Sky can be modded with ease, and this article is proof of that. The mods can be used to add in-game assets and make changes to features.

Can you get banned for modding No Man’s Sky?

It all depends on the type of mod. For example, a mod that makes changes to the graphics and in-game enhancements will not get the player banned, but any mod that changes the gameplay to the point where it’s cheating, then the ban hammer will come down without mercy.