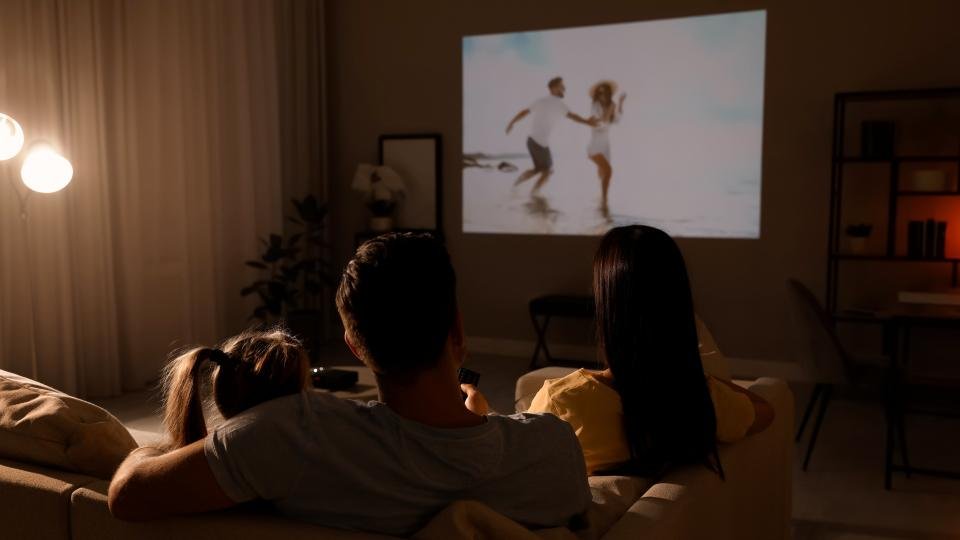 Looking for the ultimate big-screen thrills? These are the very best projectors

Big-screen TVs are ten a penny these days, but what if you hanker after something greater, something bigger and better? A projector might be just the box-office ticket.

Modern models are cheaper and better than you’d think and can create huge images far bigger than the equivalently priced LCD or OLED TV. But which one should you buy?

Here you’ll find our selection of the best projectors you can buy in the UK, from portable marvels to home theatre beasts, all tried and tested – and if you’re not sure what features you should be looking for, read on to get the lowdown with our handy buyer’s guide.

Get the best portable 1080p projector for even less

The ViewSonic M2e earns our recommendation below as the best portable 1080p projector that you can buy, and right now it’s going for even less at Amazon. Previously £526, you can now get this model for just £479.AmazonWas £526Now £479Buy Now

Best projectors: At a glance

How to choose the best projector for you

To the untrained eye, one projector looks very much like another. However, there’s a whole world of technology inside these plain-looking boxes you need to be aware of before making your purchase.

First, resolution. If you’re looking to buy a projector for watching movies, make sure you’re buying a Full HD projector (with a resolution of 1,920 x 1,080). Data projectors tend to be cheaper, but typically have resolutions of 800 x 600 or 1,024 x 768, which won’t display Blu-ray movie content at native resolution.

If you want 4K, expect to pay more. True 4K projectors are becoming more widespread but projector tech is lagging behind TVs and even the more affordable options come in at north of £4,000. “4K-enhanced” projectors such as the BenQ W2700 or Optoma UHD38 are the “cheapest” way to get your 4K thrills – for less than £1,500 – and they’re improving all the time. They’re not true 4K machines, relying on pixel shift upscaling to deliver an approximation of 4K resolutions, but you have to look very closely to tell the difference.

What’s the difference between DLP and LCD projectors?

DLP projectors do have a downside, though. As most display colours sequentially use a spinning, segmented colour wheel (there’s the odd exception to this rule), they suffer from what’s called the “rainbow effect”, where small areas of the image appear to splinter into small rainbows when you shift your gaze from one side of the screen to the other. Some people are less sensitive to this than others, though, so if you haven’t experienced a DLP projector, make sure you get a demo before spending your money.

Do I need optical zoom and lens shift?

After resolution and technology, the most important consideration is your room and how you’re going to set up and connect the projector. Here, you need to consider throw distance (how far you place the projector from the screen for a given screen size), optical zoom and lens shift capabilities, all of which will have an impact on projector placement.

If space is really tight, you might want to consider a short throw or ultra-short throw projector, which can create big images on your screen or wall from incredibly short distances – as little as 10cm for a 50in image in some cases. The downside is the projected image tends to suffer more from geometric distortion.

Other things to consider:

The best HD and 4K projectors to buy 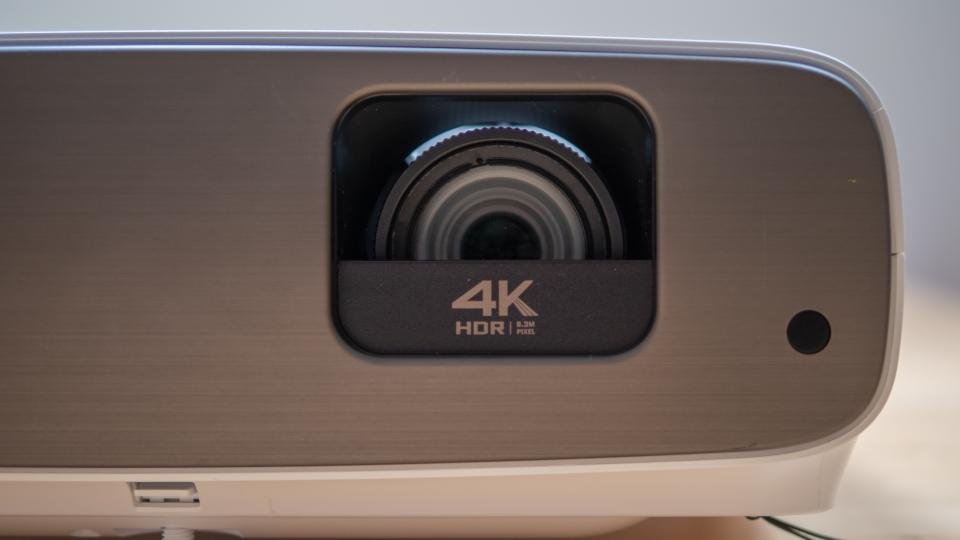 Projectors typically aren’t very good at reproducing HDR content due to their limited black and brightness levels. However, what this projector does well is recreating colours at close to HDR levels. Indeed, if you feed it a 4K Blu-ray, it will lap it up and project an image that’s as close to a movie screen in your own home as anything this side of five grand.

It may not be the brightest projector around with a peak of only 2,000 ANSI lumens, but it has a short throw lens that allows it to create a large display from relatively close up. It also has all the connectivity you need without any frivolous extras, plus adjusting the image to suit your screen and room setup is a doddle thanks to zoom and vertical lens shift capabilities.

Quite simply, the BenQ W2700 is a stunning projector. If you’re looking to recreate a movie theatre vibe in your living room and don’t have many thousands to spend, this is a very good place to start. 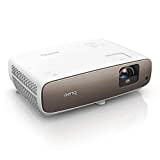 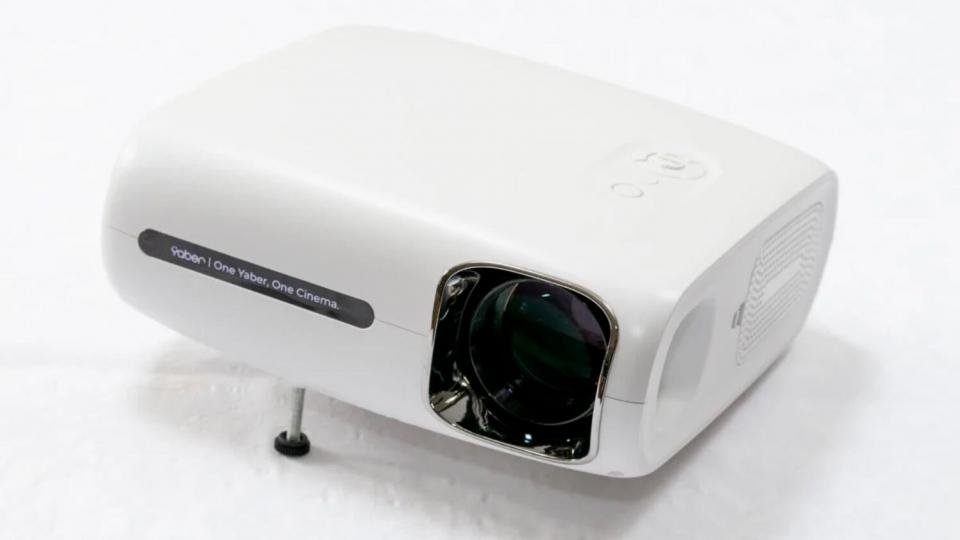 If you’re after a cheap and cheerful projector for watching occasional films, sport or TV programmes with the family, the Yaber V7 Pro is an excellent choice. It’s very bright at a claimed 9,000 lumens and outputs a decent 1080p image that you can adjust via the menu. The image correction feature is also handy for households with children: if the projector is moved or knocked slightly, it will automatically adjust the picture.

It certainly doesn’t have the bells, whistles or crispness of other, more expensive projectors on this list, but the Yaber V7 Pro is a good budget option. The free carry bag is a nice bonus too. Bear in mind that it’s not the quietest model around, though, and produces a noticeable fan whirr. 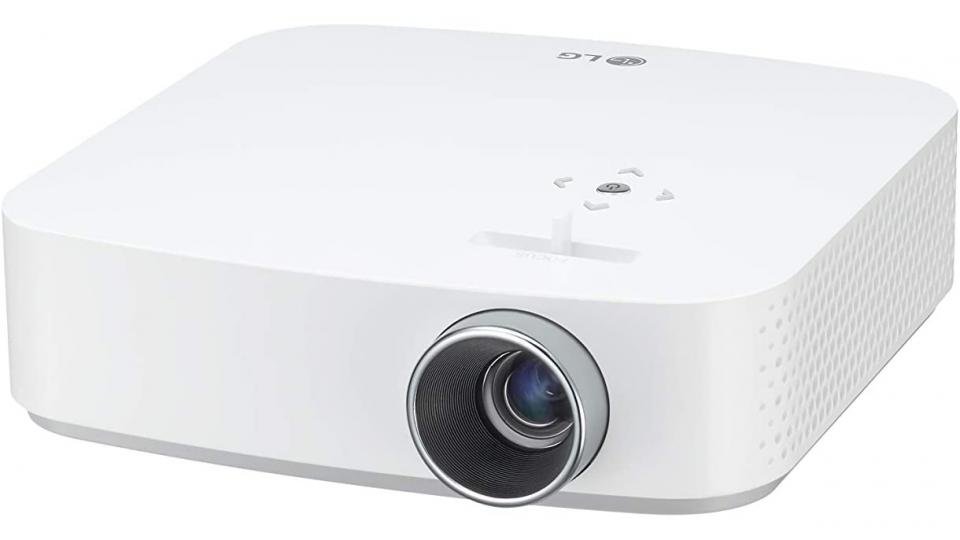 The LG PF50KS isn’t in the same league as the full-size projectors in this list when it comes to brightness but it’s cheap, unobtrusive and stuffed with features.

It’s a portable projector and absolutely tiny – about the size of a thick hardback book – and it weighs a mere 1kg, so it’s easy to stow away once you’ve finished with it. Otherwise, though, it punches well above its weight. Brightness is fine at 600 lumens, although you’ll need to dim the lights and close the curtains to enjoy it fully. The resolution is native 1080p and great for movies and the projector is able to project images up to 100in as well. Pick the Expert Dark Cinema preset and you’ll be rewarded with superbly accurate colours as well.

Not only that but LG also has also packed in the features, with Netflix and YouTube apps built-in, screen mirroring via USB-C and Wi-Fi, and integrated speakers (although these are rather tinny). The projector can also output audio via Bluetooth audio, keeping cable clutter to a minimum. It has a surprisingly broad selection of physical inputs as well, including two HDMI ports, one USB-A and an Ethernet port for wired network connection.

Overall, the LG PF50KS is an excellent alternative to a full-size projector and the best thing is it doesn’t cost all that much, either. 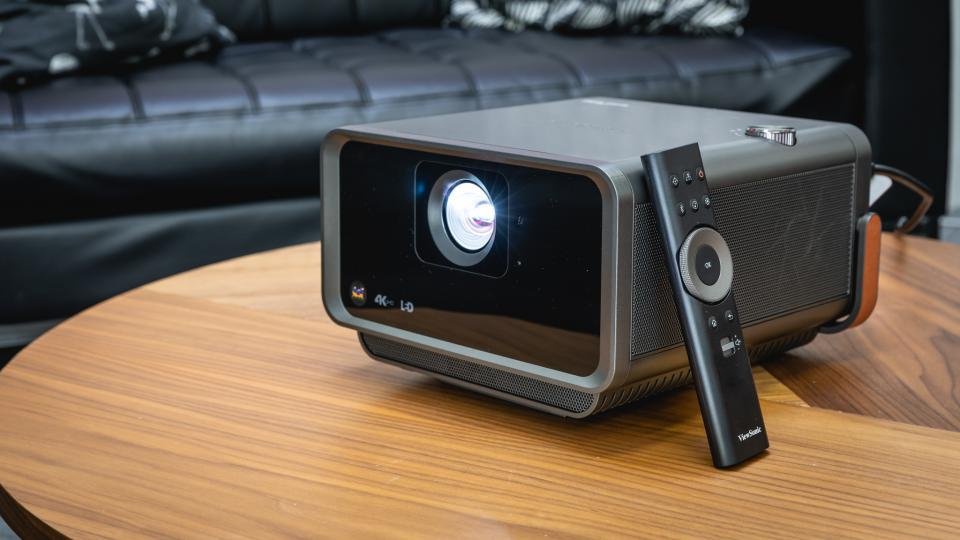 Its image quality may not quite match that of the BenQ W2700, but the ViewSonic X10-4K is a cracking projector and has its own benefits. For starters, its RGB LED light source means you’ll only have to replace it every 30,000 hours as opposed to the 4,000 hours that the BenQ’s lamp lasts. That’s more than 16 years of watching at five hours a day.

It looks smart, comes with an integrated carry handle to make it easy to carry around the house and picture quality is sublime. It’s bright and that LED light source means it can create more vivid colours than most projectors at around this price. Combine that with a sharp 4K image, easy setup thanks to its autofocus and auto-keystone adjustment, Alexa and Google Assistant support and a good quality built-in 16W speaker system, and the X10-4K makes a solid case for itself. Overall, it’s a very impressive all-rounder. 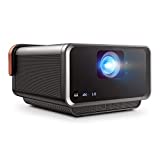 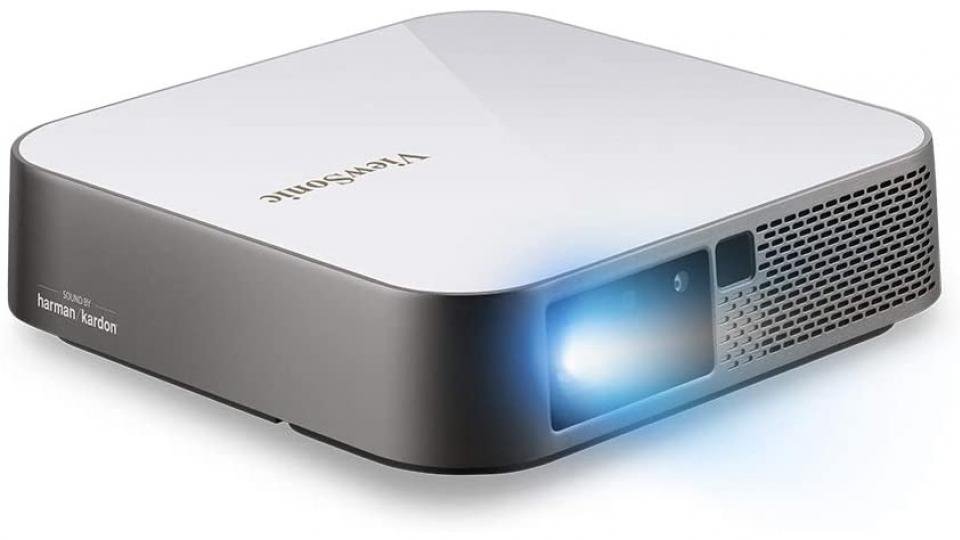 Priced as a cheaper option to the ViewSonic M2, the M2E offers superb image SDR image quality in an even more compact package. Resolution is limited to 1080p and there’s no wide gamut colour representation as you get with its pricier sibling.

Brightness is a touch weak at 1,000 LED Lumens, which means you have to dim the lights and draw the curtains. However, image quality is still very good, with the projector’s movie mode delivering 90.9% coverage of Rec.709 and decent colour accuracy, albeit with a little red push in the dark greys and black. This is easily enough tweaked, though, with the M2E’s extensive array of colour controls and adjustments.

It will produce a screen size of a maximum of 80in display from a distance of 2.14m and a tripod socket at the bottom and a hinged leg all make positioning the projector easy. With automatic focus and keystone adjustment, there’s no fiddling around once you’ve got it all set up, either.

Finally, there’s a decent array of connectivity, with a single HDMI video input alongside USB-C, a microSD card slot and a USB-A port. It can act as a Bluetooth speaker, plus you hook it up to your home wireless network and either screen mirror from a phone or install apps from the projector’s built-in Aptoid app store. We’d advise teaming the projector with a decent streaming stick, though, as many of the Aptoid apps are rather fiddly to use.

Overall, the ViewSonic M2E is a top-quality compact projector. A little pricey at list, perhaps, but if you can find it for less than £500 you’ll have a bargain on your hands. 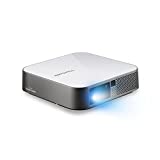 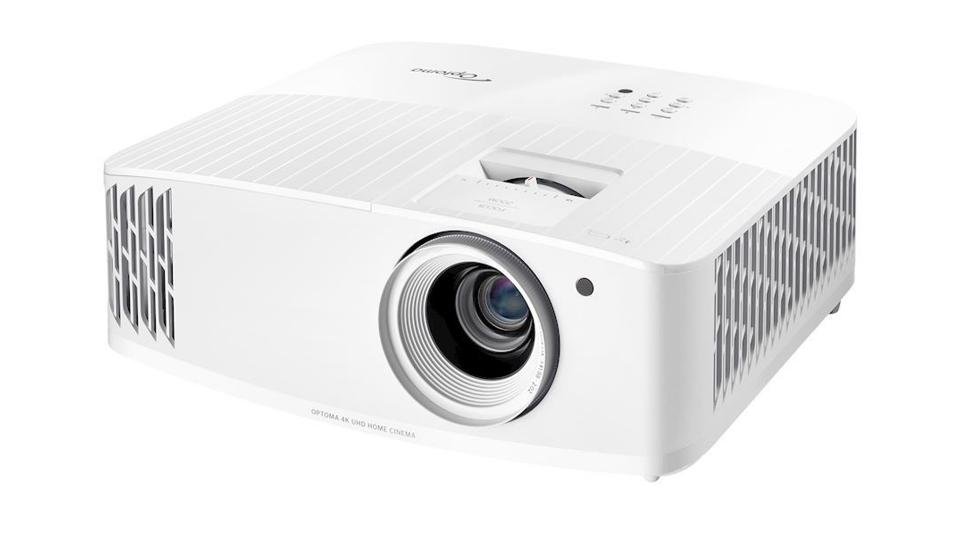 If you’ve bought yourself one of the latest games consoles, you’re going to want a display that can keep up and that’s exactly what the Optoma UHD38 delivers. Not only can it project your games at huge screen sizes, but it can do so at high refresh rates: up to an incredible 240Hz at 1080p and 120Hz at 4K resolution. Games look epic on this thing.

It’s also an accomplished home cinema projector, with support for HDR10 and HLG and a bright image of 4,000 lumens that means it’s watchable during the day, although black level response isn’t the best. Focus is manual and, as it isn’t a short-throw projector, you’ll also need a fair amount of space to maximise your screen size. There’s also nothing in the way of smart connectivity here, as you get with some of the compact projectors on this page.

However, if you’re a gamer and you want to play on the biggest screen possible, there aren’t many better ways to do it than on this potent projector. 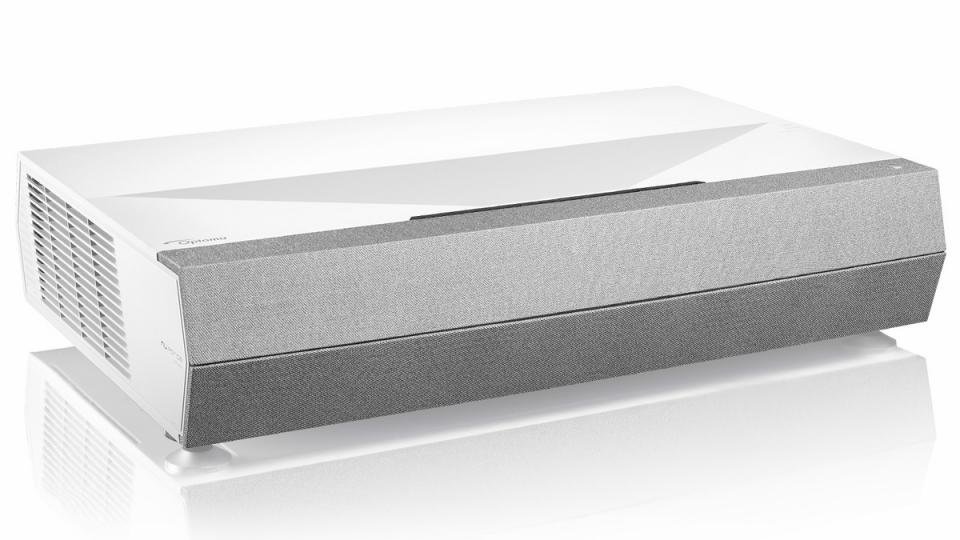 Home cinema doesn’t get much simpler or much better than the Optoma CinemaX P2 – at least on a sub-£3000 budget. The one unit combines a 4K laser projector with a Dolby Digital 2.0 soundbar, with an ultra-short throw so ultra-short that you can shove it under the screen or against a wall and still get a 120in picture. What’s more, that picture is sharply focused and free from distortion with the absolute minimum of tweaking, although you can use Optoma’s intelligent smartphone app to correct any remaining issues using your device’s camera.

Picture quality is excellent. The CinemaX P2 can reproduce up to 71% of the DCI-P2 colour gamut, and while brightness and contrast levels aren’t outstanding, you can still expect inky blacks, rich colours and credible HDR highlights; it’s a brilliant projector for blockbuster movies. And while it hasn’t got the hotshot gaming skills of the UHD38, the low response times and impressive definition make for a really immersive experience. What’s more, the onboard sound is clear and surprisingly powerful. You won’t get proper home cinema surround sound, but it’s hard to grumble when the enhanced stereo effects are so exciting. Get this and a big white wall or pull-down screen, and you’ve got everything you need for an epic big-screen adventure.