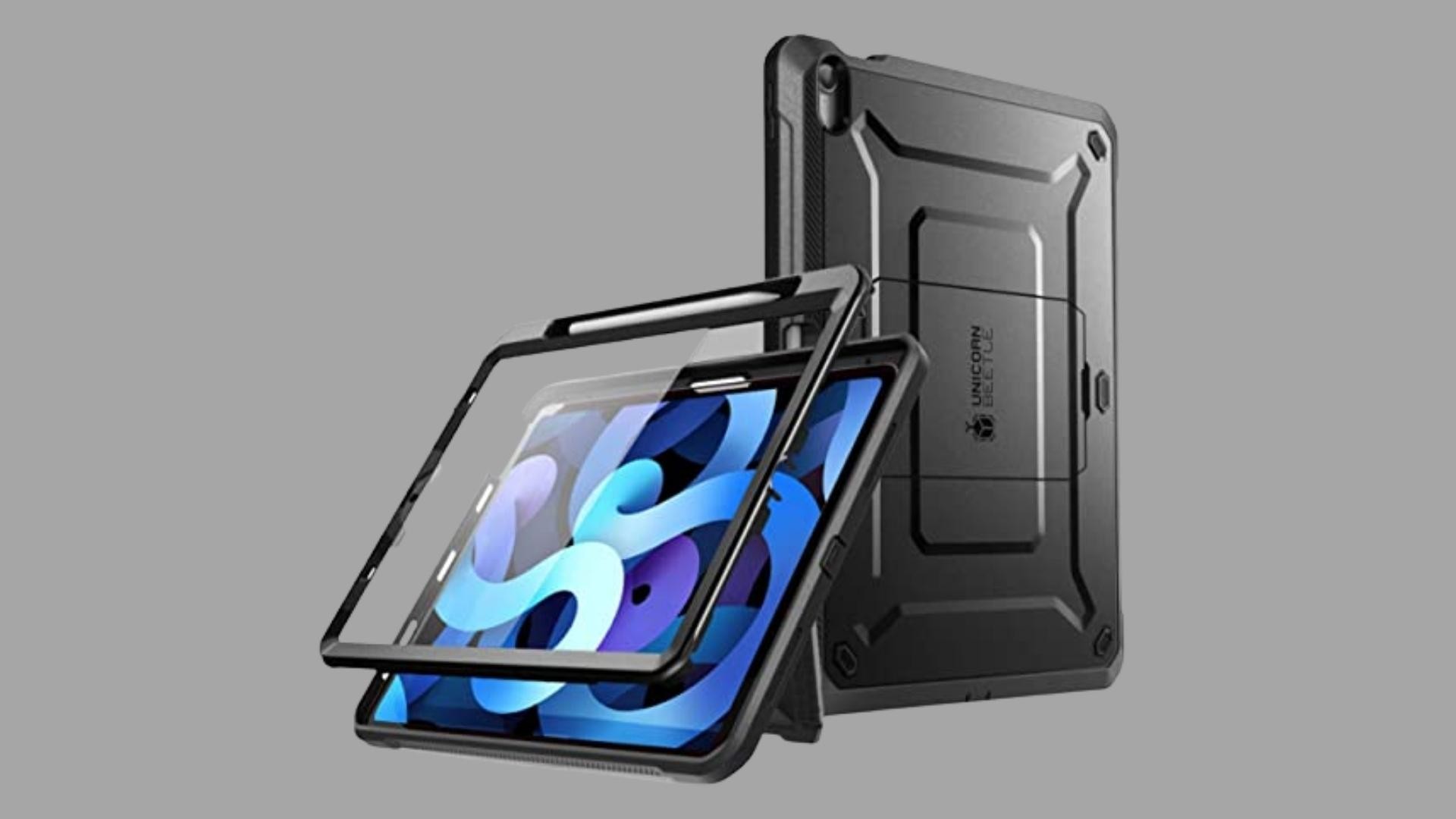 The iPad Air 5 is a stellar tablet, packing in some of the best hardware has on offer. For $599., it ships with the M1 Processor found on the iPad Pro lineup and even shares a close resemblance to its design. But the resemblant design also means the iPad Air is one of the thinner devices available on the market, and you’re bound to have thought of protecting it with a case. But when you go shopping for one, you’ll come across a plethora of options, some that add keyboards, some that maintain the sleek look of the iPad while offering some amount of protection, and others that will ensure the tablet can handle quite a bit of rough usage. In this article, we will be focussing on the last category by listing out some of the best Rugged Cases available for iPad Air 5.

Unicorn Beetle Pro for iPad Air (5th generation) brings class-leading drop protection without imposing a compromise on the tablet’s capabilities. It has precise cutouts that don’t impede the Touch ID sensor or Apple Pencil’s magnetic attachment mechanism. The UB Pro even brings the ability to make the accessory feel more like it is yours by letting you pick between seven different color options for iPad Air.

The ESR Hybrid Case for iPad Air 5 combines a magnetic folio with a casing that uses TPU and polycarbonate to make a package that adds protection and versatility. While it doesn’t come with any claims, we expect the accessory to bring more than adequate drop protection, and in case you use an Apple Pencil, you’ll be glad to see there’s a flap that will keep the stylus in place when you travel with your iPad in a backpack.

The ZUGU Case for iPad Air 5 presents the capability to set the tablet in eight different positions to ensure it’s perfect for the usage scenario. Glare can be hard to deal with when working in bright environments, and having only a couple of fixed angles can be a turn-off. Thus, the freedom afforded by such a case can be immense for many. Alongside this feature, the case improves upon the resilience of your tablet with its five-foot drop protection.

The Ultra Hybrid Pro brings the reliability of Spigen and its full-bodied accessories to the iPad Air. This particular model integrates the OEM’s popular Air Cushion Technology to create a product that will absorb shocks from falls and dissipate them to keep your iPad safe. The folio part also comes in handy if you ever want to prop up the device for convenient viewing. The case is also available in several colors to match or introduce contrast with the color of your iPad.

The Spigen Rugged Armor Pro is the case to get if you want to have a muted look on your iPad Air. Like the Ultra Hybrid Pro, it incorporates the OEM’s Air Cushion Technology to reduce fall impact at the corners. The flexible folio on the front also serves as the perfect stand for when you wish to prop the tablet and view content, be it a video or a book that you’re reading.

The OtterBox Defender Pro Series for iPad Air 5 brings a part to this list of rugged cases that many OEMs don’t offer, and those are its port covers. These elements make this case perfect if you intend to use your iPad on construction sites. There is also an antimicrobial coating present on the outer surfaces, which preserves the materials used in the making of this cover.

The UAG Lucent Case features a modern-looking design that combines a translucent cover with a pattern and a black folio component. It even features several raised edges around exposed components — like the camera — to add protection against scratches or uneven surfaces. The OEM describes the case as a super-light accessory that even meets military drop-test standards.

The UAG Metropolis Case for iPad Air 5 is described as an accessory built to resist damage during any daily adventure, be it a play session for kids with their friends in a park, or a work session for adults in a cafe or co-working space. The case has an adjustable stand that allows for hands-free viewing and drop test certifications which promise 360-degree protection.

The Targus Pro-Tek Rotating Case, as indicated by its name, adds rugged protection to iPad Air 5 alongside the ability to rotate about a point, allowing users to easily switch from portrait to landscape orientation. The reinforced corners on this case also act as chambers to allow the audio output to sound more full by deflecting it towards you, mimicking a set of front-facing speakers.

The DualShock Protection Case by SaharaCase brings a heavy-duty option for iPad Air 5 with the construction that uses TPU and polycarbonate, hardened to allow for improved durability. The case also has a built-in kickstand and a hand strap to make propping up the device or carrying it an easy task to accomplish.

The MoKo Rugged Case for iPad Air 5 uses a dual-layer design of TPU and a hard shell to protect the tablet without hampering any functionality. The accessory also has a freely adjustable kickstand that will help prop up the iPad to allow for hands-free usage scenarios. There is also an included screen protector if you want to use one to protect the front of your iPad while it’s in a case.

Which Rugged Case should you buy for iPad Air 5?

If you’ve read through this guide and haven’t been able to pick the perfect rugged for your iPad Air 5, here are some of our thoughts on which products we think you should consider getting.

First up is the SUPCASE UB Pro for its all-around protection. It incorporates many elements into its package, like the built-in screen protector, TPU for its corners, port covers, and a dedicated slot for the Apple Pencil, which makes it a very attractive purchase. If you need a cheaper alternative to this case, the MoKo Case is the next best option. Although, it does sacrifice a couple of niceties included with the SUPCASE.

Now, if you’re looking for a more muted look, the OtterBox Defender Pro Series and Spigen’s Rugged Armor Pro are the next best options. The former is definitely more protective, but it does add a significant amount of bulk to the iPad, so make your choice carefully in this case. If having port covers isn’t a necessity, we would recommend going with the sleeker Spigen.

This marks the end of our rugged case recommendations for iPad Air 5.