For all of the marketing noise, however, there are still a host of factors to consider. As with wired headsets, wireless variants will offer features such as surround sound or noise-filtering microphones. On top of that, you’ll need to consider your own comfort. Then there’s the issue of battery life – wireless headsets have to be charged, after all.

Taking into consideration these questions (and others), we’ve produced this roundup of our favourite wireless gaming headsets. Below, you’ll find our pick of the best wireless headsets you can buy; keep scrolling and you’ll find a short guide to help you make the right purchase.

How to choose the best wireless gaming headset for you

What are the benefits of a wireless gaming headset?

Hopefully, this should go without saying, but a wireless gaming headset has no wires. That means you have the freedom to wander, and the benefit of reducing the size of the ever-present nest of cables beneath your desk or around your TV.

If you’re the kind of gamer who connects their PC to a TV, or if you’re a console gamer looking to further reduce the cable clutter, a wireless gaming headset is a necessity. Nowadays, audio quality is on a level with wired gaming headsets, so there’s even more reason to cut the cord.

How much should I spend?

As we’ve already mentioned, wireless gaming headsets tend to be more expensive than their wired counterparts. A budget pair might set you back £50 to £70, while the more expensive models can reach in excess of £270.

It depends almost entirely on what your budget is and what you want your headset to do; for the most part, the more you pay for a headset, the more features it will offer and the better the sound quality is likely to be. Set a budget before you begin thinking about what to purchase.

Those of you who enjoy listening to music while you play will no doubt appreciate a headset with strong audio credentials. Otherwise, the most important thing to look out for on the sound-quality front is what we call a wide soundstage; in gaming headset terms, this means being able to accurately depict where in-game sound is coming from.

What other features should I look out for?

Battery life: Generally speaking, headsets will last from ten to 20 hours on a single charge; some particularly pricey specimens may also have removable, rechargeable batteries so you can trash talk for longer. There’s really no reason we wouldn’t recommend the longest battery life that your budget will allow.

Noise-suppressing mic: If you’re living with noisy siblings/flatmates/pets, you might want to consider a noise-suppressing microphone to block out everything except the sound of your voice. As it happens, you’ll find that plenty of modern gaming headsets offer this feature as standard.

Cup-mounted controls: A wide selection of cup-mounted controls can really help limit the amount of time you spend fiddling with settings onscreen. At the very least, you’ll want a mute button and volume adjusters, although many headsets also offer sliders that alter the chat-to-game audio mix.

Surround sound: Many wireless gaming headsets come with some form of virtual surround sound support, be that 5.1, 7.1 or Dolby Atmos. In theory, this technology should produce an unbeatably immersive soundstage to help you pinpoint an enemy’s footsteps before they take you unawares. It’s certainly not essential, however.

Drivers: Although it might sound complicated, drivers are a requirement rather than an optional extra and, as such, you won’t need to pay too much attention to them. For the record, drivers found in wireless gaming headsets usually range from 40 to 60mm in diameter, and the more expensive options will have neodymium magnets.

After a competent, versatile, cross-platform headset? The Arctis 1 Wireless for Xbox is the first headset you ought to consider. It may say ‘for Xbox’ in the name, but this well-made gaming headset is also compatible with the PS4, PC and Switch, plus Android devices. SteelSeries says it’s future-proofed for the Xbox Series X, too.

To connect the headset wirelessly, all you have to do is plug a small USB-C transmitter into your console of choice, then kick back and enjoy high quality, low-latency audio via a lossless 2.4GHz connection. A 3.5mm cable is provided, should you need to switch to a wired connection. The Wireless 1’s ‘Discord-certified’ detachable boom mic is as good as it gets at this price, and the bidirectional noise-cancelling does a stellar job of cutting out background chatter.

Comfort is the top priority for many gamers, of course, and the Arctis 1 Wireless doesn’t disappoint, providing a snug and cosy fit thanks to the plush earcups and foam-padded, steel-reinforced headband. With up to 20 hours of battery life, the Arctis 1 Wireless for Xbox will see you through a good few sessions before needing a top-up. As an added bonus, it also ties with our favourite cheap wireless headset for price. How about that for an all-rounder.

The Corsair Void RGB Elite Wireless strikes a keen balance between price and performance. This headset isn’t overladen with cup-mounted controls – featuring just a power button, a mute button and a volume rocker – but we appreciate the way it fits everything onto the left cup so you never have to lift your right hand from your mouse.

With a robust, angular design that belies its relatively low price, the Void RGB Elite is a good choice for gamers on a budget. Audio quality is as good as you would expect: bright and loud, with good instrument separation, a reasonably wide soundstage and slightly weak bass response. In other words, it’s ideal for gaming, but perhaps not the best headset for audiophiles. Battery life, meanwhile, is exceptional, coming in at around the quoted 16 hours.

The absolute best thing about this headset, though, is how simple it is to use. Compatible with both PS4 and PC, all you need to do is plug in the bundled USB receiver and the Void RGB Elite Wireless is ready to go. The headset sits loosely on your head, which might irritate some, but is honestly much better for you in the long run. I wore this headset for the best part of a day without suffering from overheating or tension-related aches.

The HyperX Cloud Flight S is an exceptional gaming headset that’s compatible with both PC and PS4. It operates wirelessly via a USB Type-A transmitter and can be charged wirelessly using a Qi charging pad or HyperX’s ChargePlay Base, which is sold separately. If you’re not into wireless charging you can use the supplied USB Type-A charging cable.

It’s one of the most comfortable gaming headsets we’ve ever tested. Spacious memory foam-lined earcups make it a pleasure to wear for long play sessions and passive noise cancellation is highly impressive. Sonically, the Cloud Flight S is great, too. The basic sound profile is top-notch but we favoured having 7.1 Surround Sound engaged most of the time. The audio is detailed, rich and strikes a nice balance across the frequency spectrum. Another standout feature is battery life, which is a whopping 30 hours at half volume.

The detachable microphone works effectively without being class-leading and is easily muted using one of the four buttons positioned on the outside of the left earcup. The other three buttons allow you to toggle mic monitoring on and off and adjust the game/chat balance. Each button can be customised using HyperX’s Ngenuity software, though it is currently only available on Windows.

Does your hair stand on end at the thought of RGB lighting? Then the Logitech G935 might be for you. The LED strips that line this headset are totally customisable, so you can light up the darkened room where you play. But that’s not all: as it happens, this is one of the most feature-rich headsets on this list.

The G935 has a surplus of cup-mounted features including volume/mic controls, media navigation buttons and a slot for the USB receiver. Promising 12 hours of play on a single charge, the G935 also has a replaceable battery in the right earcup. Sound quality is good, although this is definitely a gaming headset; that all-important wide soundstage is present but slightly underwhelming mids keep the G935 from true audio greatness.

LucidSound’s LS35X headset is tailor-made for your Xbox One and will pair without the need for a receiver. The LS35X has two mics – a detachable noise-suppressing boom mic and an integrated variant for mobile use – and a healthy array of cup-mounted controls. Hidden wheels on the left and right cups adjust master and chat volume, and double as media navigation buttons when pressed.

Sound quality is excellent: spacious and clear, with strong bass and powerful upper registers. Our biggest complaint is that connection to a PC, while possible, requires an Xbox Wireless adapter (sold separately) and can be very temperamental. If you’re an Xbox console gamer through and through, however, the LS35X is the ideal headset.

Like the LS35X, Sony’s PlayStation Platinum headset offers the absolute simplest way to enjoy a classy wireless gaming experience on your PS4. The headset is strikingly designed, all brushed metal and dark fabric with a shock of blue foam covering the drivers. It sounds the part, too, with the kind of bass response and broad soundstage you expect from a product worth twice as much.

Two integrated noise-suppressing mics sit within the left earcup, while volume and mic controls line the right earcup. Sony has put together a few developer EQ presets that you can select using the companion app, although you can also create your own; the Platinum also supports Dolby surround sound for compatible games. An excellent choice for PS4 gamers. 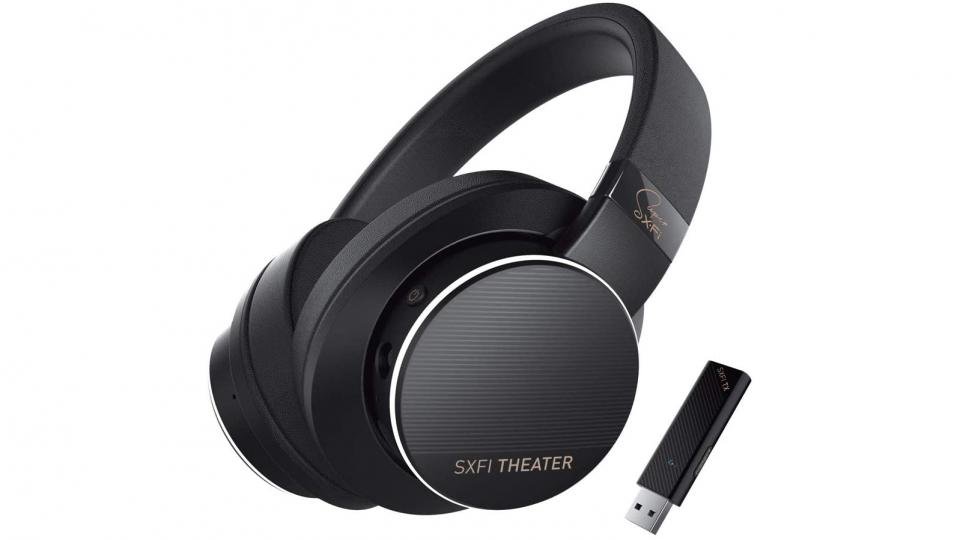 This might be the first gaming headset to require you to take a picture of your ears before use. Using Creative’s Super X-Fi technology in tandem with the shot of your ears you uploaded to the SXFI app, the Creative SXFI Theater headset will produce a bespoke sound profile. This profile will help elevate your listening experience beyond any other entry on this list; whereas most gaming headsets offer passable sound tailored to videogames and little else, the SXFI Theater produces an astonishingly detailed noise full of depth and clarity.

It’s not all about catching your enemy’s footsteps from half a mile away, though. The SXFI Theater also has comfortable cushioned pleather earcups and a halfway-decent microphone, plus the usual array of cup-mounted controls. And with a quoted 30-hour battery life, you won’t have to charge them half as often as many of their competitors. There are drawbacks – the price, for one, but also the immovable headband and lack of Xbox support – but overall, this is a cracking audiophile-grade headset. 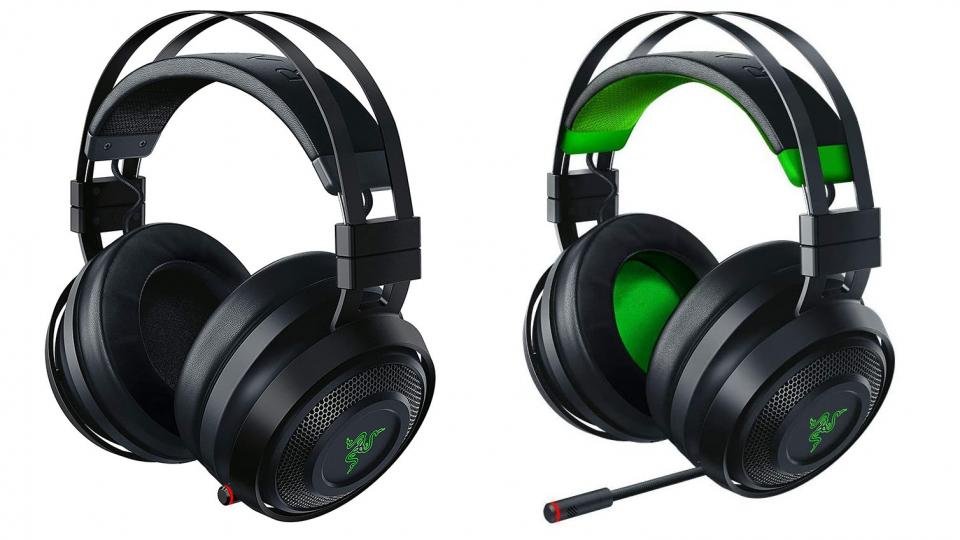 The Nari Ultimate isn’t the first gaming headset to dabble in the mystic art of haptic feedback (ie. rumble), but it has certainly made the best go of it. From the brief shudder when you power the headset up to the brain-wobbling rumble that accompanies bassy audio, the Nari Ultimate is remarkably good at bringing you that much closer to the action.

There are two Nari Ultimate headsets: the standard model (left image) and the Xbox One variant (right image). We recommend the standard model: it tends to be cheaper but still comes with a 3.5mm jack and wireless dongle that slots neatly into one earcup. The Xbox One model lacks these extras and requires the Xbox Wireless Adapter (sold separately) to function on PC.

With a retractable mic, Synapse-enabled RGB lighting and cushions infused with a cooling gel, this is a luxurious headset, and the stunning audio and recording quality reflect that. Just be warned that the Nari Ultimate is ENORMOUS; we really don’t recommend wearing it out in public (as if you were ever going to). 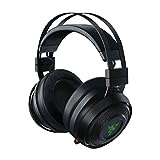