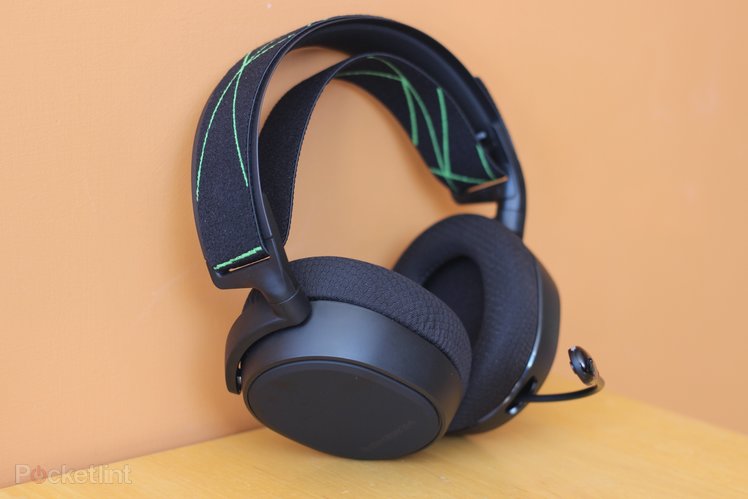 If you’ve never used a headset to game with, you’ve got a revolution coming – once you step into the world of high-quality game audio it can be hard to come back.

Whether you want it for singleplayer story-driven experiences, or to give you the edge in multiplayer deathmatches, unless you’ve got an astonishingly good home theatre setup you’re going to notice a big difference when moving to a headset.

However, many headsets don’t work with every games console, and it’s important to look into which will work best for you. We’ve spent the last few weeks exhaustively testing a wide range of headsets with our Xbox One, putting them through their paces and determining which you should consider for your own gaming setup.

How can I connect a headset to my Xbox One?

It’s easy to forget but, when Microsoft released the Xbox One, its first controller didn’t have a 3.5mm headphone jack. This meant you had to use an adapter to connect a wired headset via the controller, and you might still have to if that’s the version of the controller you use.

Alternatively, more recent editions of the controller have that all-important jack to let you plug in more easily. Finally, you might find that some wireless controllers use a dongle to connect without cables.

Another less common way of connecting, but arguably the ideal, is through Xbox Wireless – the same standard that Xbox’s own first-party controllers use to connect to your console. This makes for the most solid connection, the easiest reconnecting, and has the added bonus of being guaranteed to work with the Xbox Series X when it releases.

In case a step-by-step guide is useful, though, follow these steps to connect your headset:

With that out of the way, let’s dive in and look at some of our favourite headsets. 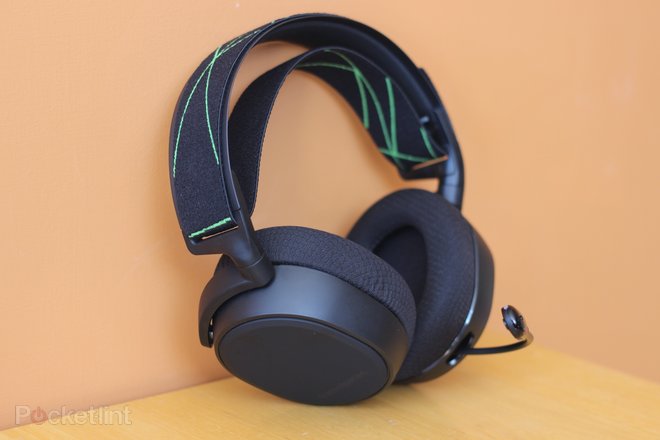 Steelseries takes the top spot in our list because it nails the combination of convenience and quality that we’re looking for when it comes to a console headset. It’s a genius revision of the manufacturer’s top headset, adding in the Xbox Wireless standard to make for superb connectivity.

This means it connects directly to your console like a controller would (and that it will be able to do the same for the Xbox Series X when it releases), which makes for rock-solid connections and no perceptible lag.

Plus, the headphones are really nicely constructed and extremely comfortable to wear and, more than that, have easily the most subtle design we encountered in our testing (only Logitech’s effort comes close). The microphone even stores away for when you’re playing solo.

Finally, sound quality is superb, especially if you enable Windows Sonic or, better yet, Dolby Atmos for headphones. You’ll gain a real advantage in reaction-based multiplayer games, and be fully immersed in singleplayer adventures. We can’t really recommend this headset highly enough, to be honest. 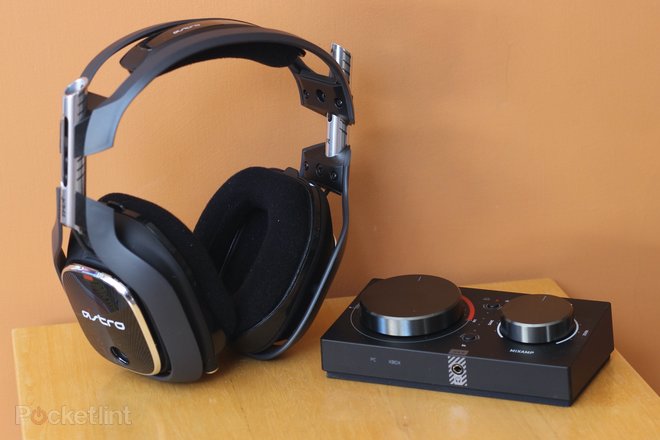 Astro A40 TR with MixAmp

If we’re going on sound quality alone, there’s no doubt that the Astro A40s are the best headphones we’ve tested for the Xbox One – the only downside being that they’re a little more involved to set up, and are wired.

They’re at their best paired with Astro’s MixAmp Pro, which lets you easily control the master volume and voice chat balance while you play, and also amplifies your sound to let you use Dolby Atmos, and trust us when we say that you’ll hear the difference.

It brings proper directional audio to the table, and the first time we fired a revolver in Call of Duty: Modern Warfare using the A40s all hooked up, we were honestly startled by how real it sounded and felt. That said, these headphones are pretty pricey if you’re buying the MixAmp too, and the fact that it all has to be wired to your console is a bit of a hindrance, especially if you don’t sit that near it.

Still, they’re supremely comfortable, made with clear attention to detail and quality materials, and the microphone is also great – that’s a pretty comprehensive package. 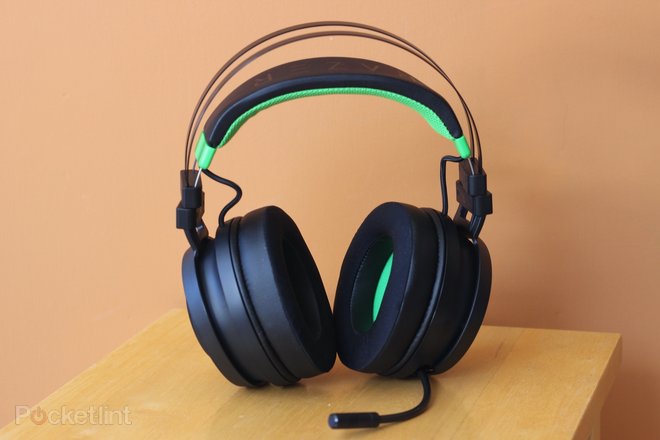 The USP for Razer’s humongous Nari ultimate is a relatively mad one – haptic feedback in the very earcups (which, on their own, are extraordinarily comfortable and cleverly cooling).

That manifests as subtle or violent vibrations, depending on your own tuning, which synchronise with the sound of your game, not the vibrations of your controller. Turned up to the max that meant our very footsteps in Call of Duty produced crunching sensations on sandy maps, which felt undeniably cool. Whether it’s immersive enough to still be used 20 hours into an RPG is harder to say, but it’s a pretty nifty feature.

Handily, though, the Nari Ultimate impressed us even ignoring the haptics entirely. It’s got fantastic, booming sound, and a nice microphone that collapses most of the way into the body when not in use. Plus, like the SteelSeries in top spot, it uses Xbox Wireless for super easy pairing and rock-solid connectivity. It’s a compelling package, with a premium price tag attached, although we’re not quite won over by the simply massive size of the headphones as a whole.

Interestingly, though, if you don’t fancy the haptic feedback you can get a very similar package for a lower price in the form of the Razer Thresher headset, which is worth bearing in mind. 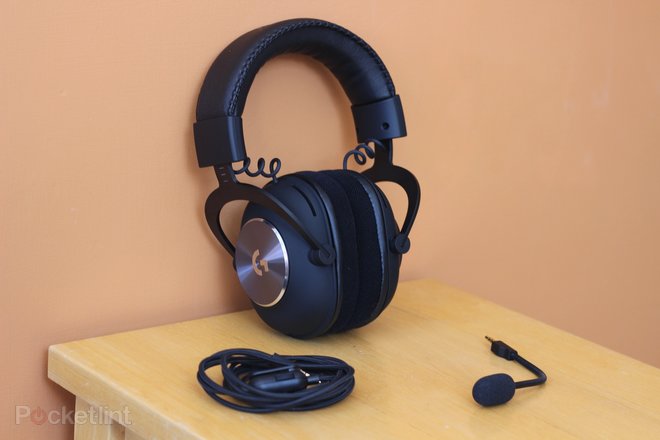 Logitech’s managed a real marvel with its Pro X headset – it’s priced it at a level that’s decidedly mid-range, but specced it out like a top-class headset, with the packaging and user experience to match.

It’s the only headset we tested, for example, to come with swappable earpads in the box, not just as an optional extra (leatherette or velour finish, if you’re interested, both very comfortable). You get multiple premium cables depending on what device you’re connected it to, a detachable microphone and a design that’s frankly gorgeous, especially in the realm of gaming headsets. I mean, it even comes with a lovely carrying pouch, again unlike any others we tested.

Plus, at its heart, the sound is superb, with really excellent detail and balance that should have you hearing things you never noticed before. Literally the only slight negative we could find was that its inline controller lets you change volume and mute yourself but not adjust chat balancing, which is hardly a huge sin. For its price, this is a seriously impressive set of cans. 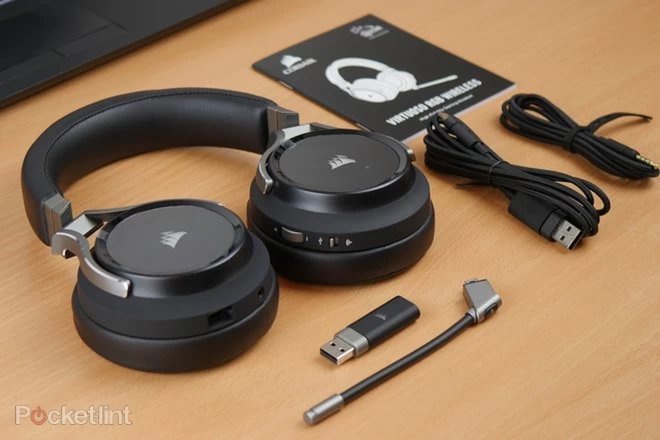 Corsair’s fancy headphones work fine on the Xbox One, with one big drawback – they’re wireless on the PS4 or PC, but can only go via 3.5mm jack for Microsoft’s console. That’s far from the end of the world, to be honest, and we’re judging them as wired headphones, through which lens they still impress.

They’re really comfortable, although also pretty chunky, and the sound quality on offer is really quite superb, sure to give you an advantage regardless of your genre. They’re also pleasingly understated, especially with the RBG lighting disabled, which many people will see as a positive. They might not be console-specific, but Corsair’s premium cans are still winners.

Best Xbox One headsets on a budget 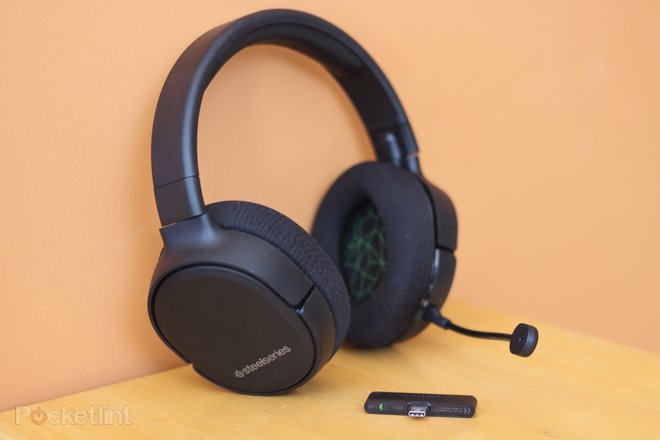 The Arctis 1 is one of the best affordable headsets on the market, and its 3.5mm wired connection works with every console, but if you want it wireless it’s a little more complex.

SteelSeries has just released a new version of the Arctis 1 Wireless which works with the Xbox One, Switch, mobiles and PC, though, and it’s become our new favourite budget headset (although the wired version is clearly the ultimate offering from a value perspective). It’s a really lightweight headset, but in a way that makes them really nice to wear for longer sessions.

It uses a USB-C dongle to connect to your console, and works seamlessly and quickly, and while the sound is stereo-only, it’s really punchy and nicely balanced. Plus, the mic pick-up is really solid, and being able to play wirelessly is a boon. For sheer adaptability, this is as good as wireless play gets, in fact. 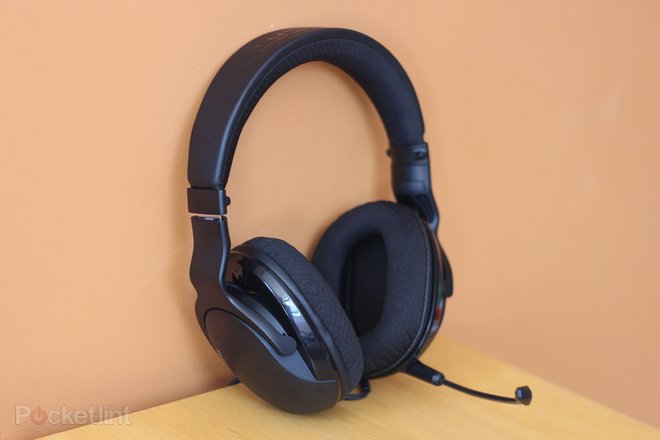 Another great option for those looking to stay well below triple figures in terms of cost comes in the form of Roccat’s Noz. It’s a wired stereo headset that doesn’t reinvent the wheel at all, but nails the fundamentals.

That means it’s got really solid comfort, with light earcups that don’t press in at all, and extremely competent sound given the price bracket. Its cables are braided, which might not sound like a huge deal but is a welcome touch when it comes to these sorts of cans, and it also comes with the option to split your cable into microphone and headphone leads in case you want to plug into a PC with split ports.

Some controls on the headphones themselves let you adjust volume on the fly and mute yourself when needed. Finally, the microphone is detachable, which we are always thankful for, given that singleplayer games are indeed a thing, although collapsible efforts are less prone to being lost. 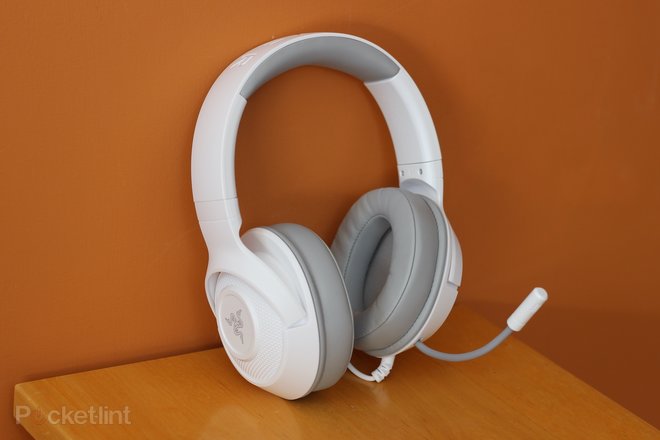 Razer’s Nari Ultimate might have the bleeding-edge features and wireless play, but don’t discount the Kraken X, its wired headset. For one thing, it’s compatible with the full range of consoles through its 3.5mm jack, making it more adaptable.

It’s also super lightweight and comfortable, and less massive than the Nari, with impressive sound performance and a really solid microphone. Its ear cushions have memory foam inserts which explains some of how easy it is to wear for long periods, while the requisite on-headset controls are present in the form of a volume dial and mute switch.

It might not be the most remarkable headset, but if you like its looks (especially the lovely white version we’ve been using), it’s a really good choice. 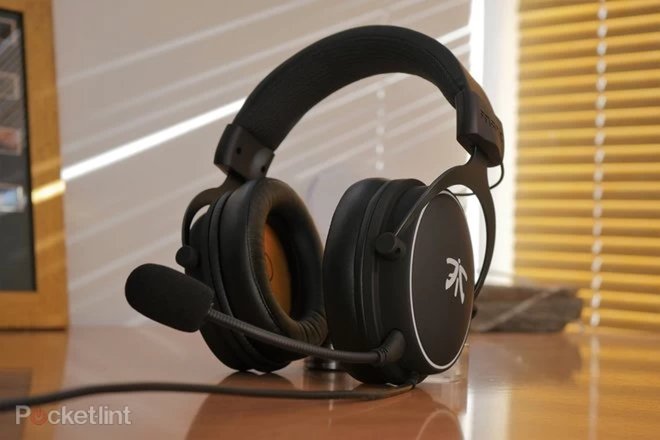 Fnatic’s headset is a great low-to-mid-range option that doesn’t do anything fancy, but nails the fundamentals of really good sound and solid comfort – plus, we have to say that we’re rather impressed by how nice it looks, all the more so when you consider that it’s coming from an eSports brand.

Its earcups are large and sound-blocking to give you good isolation, and its stereo sound is as good as you could hope for at its price, which makes for an entirely solid package. 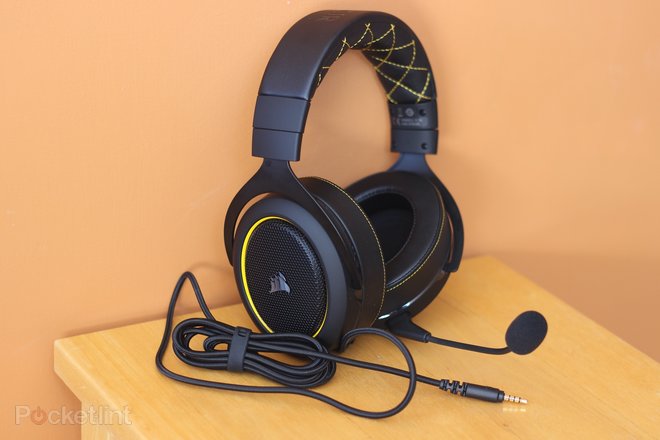 Corsair’s got less expensive options than the Virtuoso RGB up above, and the HS60 surround is a good example of what it can do – it’s got a nice, premium design with those yellow accents in particular quite lovely to look at. A detachable mic is solid on the voice-comms front, and the drivers Corsair’s packed in deliver great sound.

Sadly, its surround sound is limited to PC users, but you’ll still get impressive bass and depth from your Xbox. Slight duff notes come in the form of a slightly tight fit that can feel a bit pressing over longer sessions, and a lack of chat-game balance controls on the headset itself. 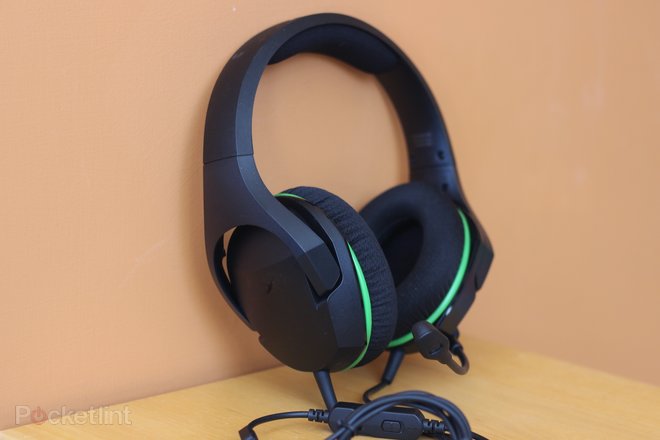 HyperX has got another option for the cheaper end of the wired headset market, in the form of the CloudX Stinger Core, and while it didn’t blow us away it’s another solid option in this bracket, and manages a really impressive price.

Its build quality can’t quite match SteelSeries or Roccat’s headsets, but the sound quality is in the same ballpark, and the headset is light and comfortable (although it’s also on the flimsier side of those we’ve tried).

The microphone, which can swivel out of the way when it’s not needed, is clear and solid in use, while inline controls on the audio cable are a smart touch.