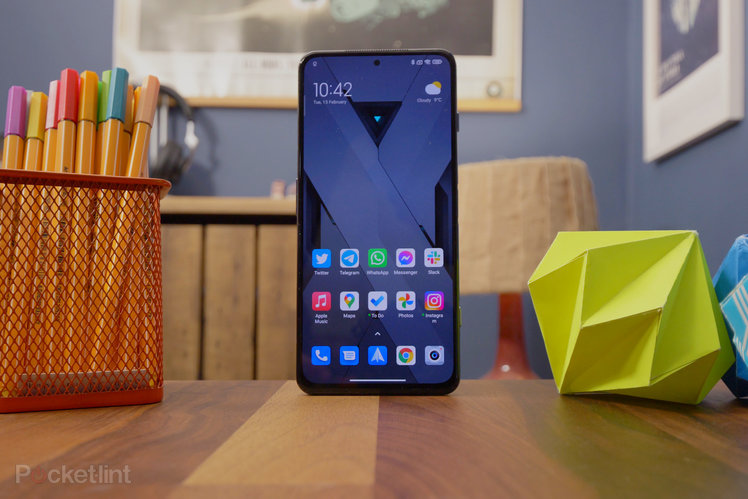 As delayed launches go, not many will match that of the Black Shark 4 Pro. First announced in March 2021, then initially launched in China, it’s finally being rolled out in Europe nearly a year later.

Add to this the context that the 4S series – which is the follow-up line – has already been revealed, and it’s certainly an intriguing timeline. Still, with its strong spec list and eye-catching price point, has it been worth the wait?

We’ve seen a lot of so-called ‘gamer phones‘ launching over the past three or four years, but one trend we’re happy to see in that time is the refinement of the design. As fun and exciting as some of those early models were with their chunky, angular frames and RGB lighting setups, there’s a bit more subtlety to the newer ones. Hence they’re not necessarily just for gamers, per se.

The back of the Black Shark 4 Pro is completely smooth and there are no unnecessary protrusions. However, there are some markings printed on the back, just so you know this isn’t just a ‘regular’ smartphone. And, while it’s more subtle, you do get RGB lighting in the form of a single glowing logo on the back, situated just beneath the camera unit. 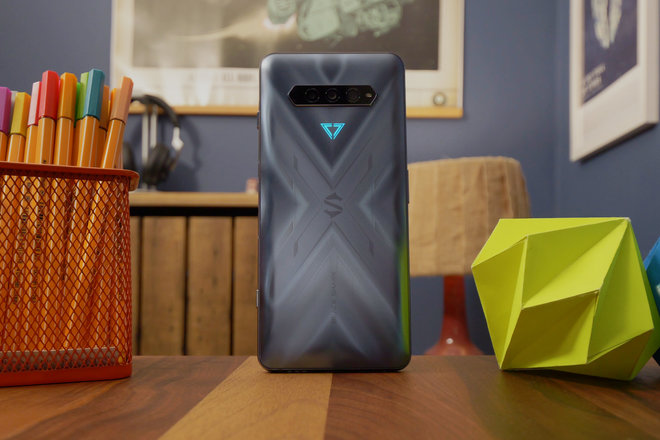 There is purpose to this bulk though. While typical flagship phones are all about embracing minimalist and stylish design at the expense of some practical features, gaming-dedicated devices tend to be the opposite. And there’s lots of that here.

The additions that make the most difference to gaming are Black Shark’s so-called ‘Master Triggers’ – little physical shoulder buttons that eject from the side of the phone. There are two of them and they replace the usual touch-sensitive panels that are often built into the edge of a gaming phone.

Each trigger has its own physical slider switch that pops it out of the side, and you can use Black Shark’s own gaming software to map them to specific functions. So, in Call of Duty Mobile, as an example, we had the left designated trigger to launch the aiming function, the right designated to fire. It helps make aiming and shooting much quicker, so keeps your fingers off the screen. It’s a lovely tactile feature to have, although it almost feels like cheating when you’re in a multiplayer match. 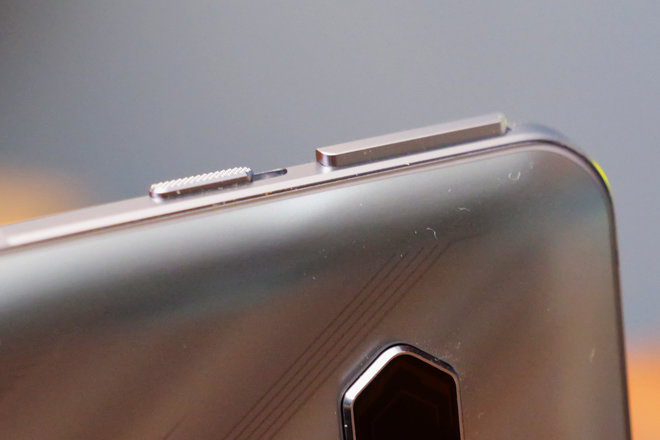 When you’re not gaming, you can programme these triggers to launch a number of dedicated functions. By default, the top or left button snaps a screenshot. But you can have it start screen recording, activate the flashlight, enable one-handed mode, or to skip forwards and backwards through music. They’re customisable, too, so you can have functions set on a per-app basis.

There is only one real issue with these physical buttons: they’re fairly easy to eject accidentally. We had a number of occasions where we’d remove the phone from our pocket and find one of the buttons had popped up. However, if one remains as such for a period of time then you’ll get a little notice on the screen reminding you to pop it back in again.

That’s not the only element that’s easy to activated accidentally though: there’s the fingerprint sensor too. This is built into the frame of the phone, on the right side, and we’d often feel the phone buzz as the skin on our palm brushed against it, registering as a failed read. Other times we had the opposite: a fingerprint register accidentally unlocking the phone. It’s definitely not as easy to do as we found on some of Sony’s Xperia line – thanks to it being more recessed – and it didn’t happen frequently enough that we were forced to use our PIN code to log in.

Just like some of the so-called gaming phones we’ve experienced in recent times, the Black Shark 4 Pro also makes for a great multimedia device. The combination of a big, bright screen with loud and immersive speakers, plus the option for wired headphones, means you get pretty much everything you could want to make the most of any movie, game or TV show. 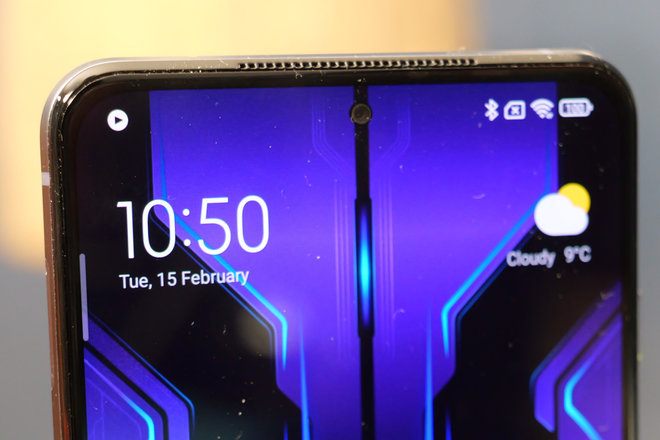 With 1300 nits peak brightness, the screen is among the brightest around, which translates to a very vibrant and dynamic picture, whether you’re playing games or watching your favourite shows on Netflix. It’s not the most naturally tuned screen we’ve ever used, but it’s not so oversaturated that it ruins the experience. It’s got pop, with deep contrast and very dark black levels.

A quick look through the display settings menu reveals you can customise this colour balance though. There’s an ‘Auto’ mode that adapts the colours to your surroundings, while the ‘Standard’ mode delivers a more muted and natural looking profile than the default ‘Saturated’. Plus, because it’s a completely flat surface, there’s no distortion or weird aberrations near the edges.

The stereo speakers on either side of the screen lift the experience further. They’re loud with a fullness and stereo separation you don’t typically get on a phone. Right and left channels are well separated, so you get this sense of being immersed in the sound, which is further helped by the fact the sound isn’t tinny and harsh. 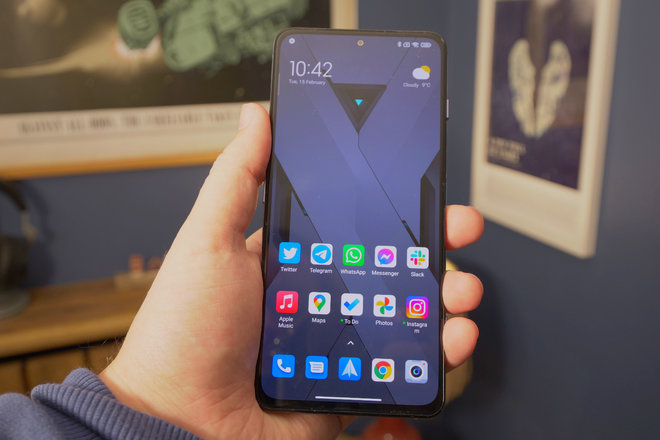 Bass and mids get a good amount of boosting, so the sound feels that much fuller than a lot of smartphones can muster. The only others that really compare are other gaming phones, like the Asus ROG Phone 5.

When approaching performance and battery, it’s rare to want to jump at the chance to express wonder at a phone’s charging speeds. But in the case of the Black Shark 4 Pro, that’s where we’re heading first, because quite frankly it’s mind-blowing stuff thanks to a 120W charger.

Most phones charge relatively quickly these days, with plenty of able to fully refill their batteries in under an hour. OnePlus and Oppo have been championing 65W flash charging technology for the past couple of years, usually meaning a 35-36 minute charge. 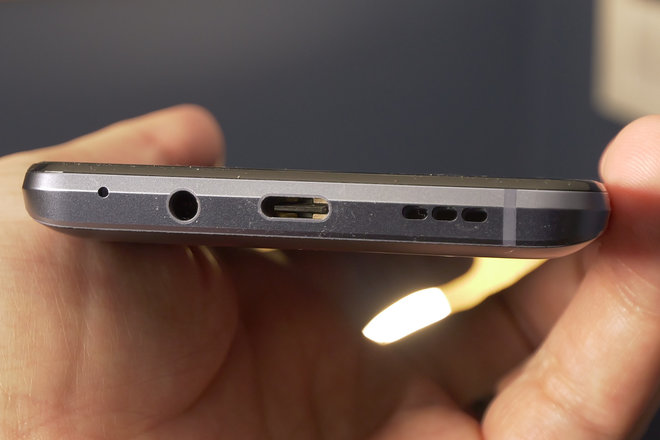 But Black Shark is still on a whole other level. After letting the 4 Pro drain almost completely (to about five per cent) we plugged it in and after just five minutes the level had already jumped to 50 per cent. After 10 minutes it was up to 82 per cent. It was full almost right on the 15 minute mark. It’s fantastic.

It’s the kind of charging speed that completely changes your routine. Because, instead of plugging it in every night, you just plug it in when it’s more-or-less empty – then go make yourself a cup of tea, do a couple of small errands around the house and by the time you’ve returned there’s enough juice to last the rest of the day. However, we do worry about the overall longevity of the battery given these speeds.

As for the actual battery life, it’s not market leading. But it’s fine. The 4500mAh cell inside the Black Shark 4 Pro is a pretty standard measure, but with it powering such a bright and high refresh screen and powering a high-end processor, it doesn’t last as long as a ‘standard’ smartphone might. That said, with around three hours of screen time per day, we’ve been getting through a day just fine. 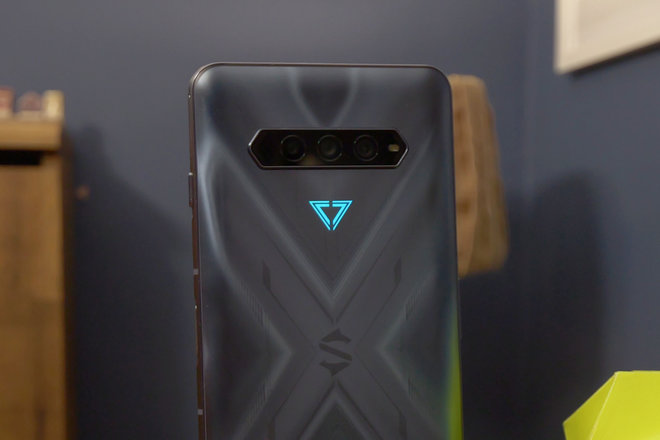 It’s probably worth noting the screen settings available too: the ‘ultimate’ setting delivers a 144Hz refresh rate. If you select the middle ‘ultrahigh’ setting, capped at 90Hz, then you’ll get more battery life as a result.

As for general performance, the Black Shark 4 Pro is really speedy and responsive. That’s partly down to the high-end Snapdragon 888 platform and sheer amount of RAM inside, but also because of how responsive the touchscreen is. With touch sampling rates up 720Hz every tap and gesture on the screen results in immediate response.

From a software perspective, Black Shark has its own custom skin called Joy UI which is essentially a forked version of Xiaomi’s MIUI skin, built on top of Google’s Android operating system. In all the most basic ways, it is very similar to MIUI, but there are additional tweaks from Black Shark around customisation and gaming that make it a little different.

The biggest difference is the app called Shark Space. It’s a tool that allows you to adjust and customise various settings; from audio and network performance adjustments to display and touchscreen changes. You can do all this on a per-app basis. So for something casual like Candy Crush or Angry Birds, you may decide you want the performance settings to be set to a more efficient level, but then for something more graphically intense like Call of Duty have it set to ‘Ludicrous Mode’.

For Black Shark – and this isn’t a surprise for a gaming-focused phone – the camera takes a bit of a back seat. However, while it’s not a perfect solution, it will be good enough for most people. It has three cameras: a primary, an ultra-wide, and a macro camera (for close-ups). As with so many, though, the primary is much better than the other two.

If you use the main camera in daylight, you’ll get sharp images with decent depth and detail, with good balance of highlights and shadows. It’s a little over-saturated at times, especially with green colours. But it’s certainly good enough to take photos on the odd occasion that you need to.

Switch to the ultra-wide view – which is unusually accessed by tapping an ultra-wide icon at the bottom of the screen – and images lose a bit of sharpness and distort around their edges too.

In a lot of ways, it feels a lot like a mid-range camera system stuck in the body of a powerful flagship. That sort of makes sense though: after all, this isn’t a particularly pricey phone, so something had to be somewhat compromised.