Black Shark, the Xiaomi-backed gaming phone, accessories maker is set to showcase the new Black Shark 4 series next week. The new series is expected to offer two models- a vanilla version and a Pro variant.

Black Shark has already confirmed that the new Black Shark 4 series will equip Qualcomm’s premium Snapdragon 888 mobile platform. The company even teased the new lineup to ship with a 4,500mAh battery and include 120W fast charging support. While the Chinese brand spared a few key aspects last week, it has now outed a few more details about the upcoming gaming phones.

Taking to the Chinese microblogging site Weibo, Black Shark has confirmed that Black Shark 4 lineup will feature a Samsung designed E4 AMOLED screen. The screen will have a size of 6.67-inch, 144Hz refresh rate and multi-finger touch sampling rate of 720Hz. The front panel will also feature a punch-hole cutout at the centre to accommodate the selfie camera. While the company hasn’t specifically detailed as to which model will get the AMOLED display, we can safely assume the Pro variant to get a taste of this high-refresh-rate panel. 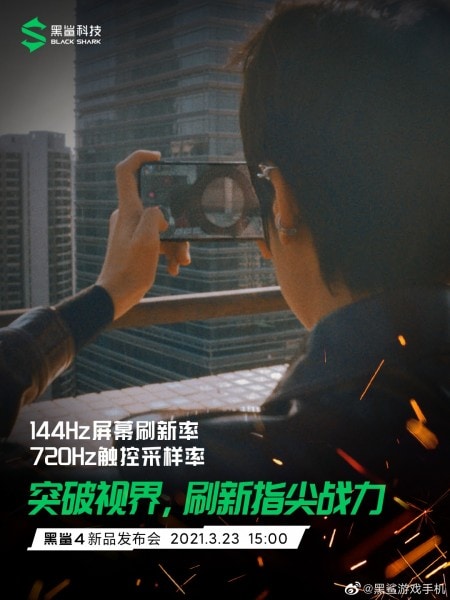 As for the design, recent renders of the Black Shark 4 phones showed mechanical shoulder trigger buttons and a fingerprint sensor embedded at the centre. As per a post shared by Lei Jun, the phones will likely have motorised triggers that will pop up when in play and retract while not in use. Besides this, the teaser posters shared on Black Shark’s own Weibo account showcased the standard Black Shark 4 back design in black and silver colours. The device could be seen featuring an X-shaped pattern and horizontally stacked rear cameras.

Previous reports have suggested the vanilla variant to sport an FHD+ resolution display, while the Pro variant could get a QHD+ resolution screen. As for the optics, the Black Shark 4 Pro is tipped to feature a 108-megapixel triple camera setup. The Black Shark 4 is expected to get a 64-megapixel camera arrangement and Qualcomm Snapdragon 870 processor. Both devices will run Android 11 OS out of the box. While leaks in the past suggested the Black Shark 4 Pro to pack a whopping 18GB of RAM, fresh reports indicate the model to offer two other memory configurations- 8GB RAM and 12GB RAM.

As mentioned earlier, the Black Shark 4 series will mark its global debut next week. The upcoming gaming smartphones official launch is set for March 23 in China.