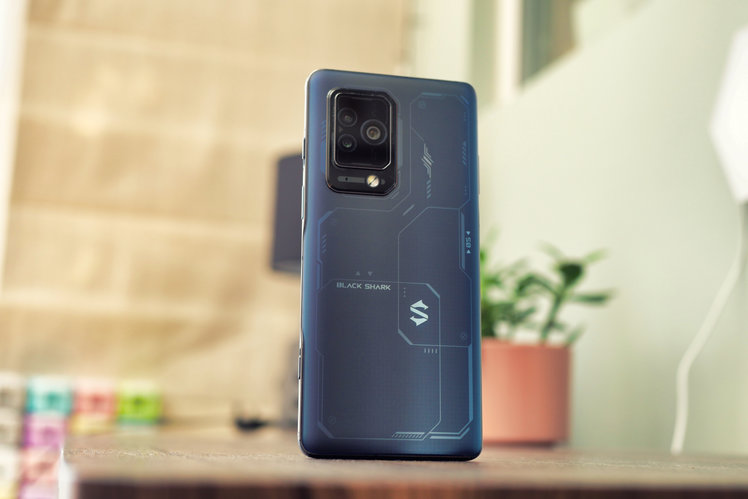 It’s not been all that long since we tested out the Black Shark 4 Pro, owing to a delay that saw the device launch in Europe nearly a year following its announcement.

A few months later, we have its follow-up, the 5 Pro. And it’s a fifth-generation model that entices, thanks to the inclusion of the latest Snapdragon 8 Gen 1 processor, a stylish redesign and the promise of an improved main camera.

With an increasing amount of competition in the gaming phone market, though, where does the Black Shark 5 Pro fit in?

We’ve been testing it for a few weeks, and here’s what we’ve found.

The Black Shark 5 Pro features a curved glass back panel with a matte fingerprint-resistant finish.

We’re testing the Stellar Black colourway, and it has a pretty striking look – especially when the light hits it. The colours shift between dark and light bluish-greys, with a graph-paper-like grid appearing in the lighter sections.

Across the rear panel are futuristic-looking glyphs and an angular, pronounced camera bump with a glossy black sheen. As usual, there’s a customisable RGB LED section, too.

It’s an unmistakably gaming-influenced design, but it’s not overly obnoxious, and we quite like the aesthetics. 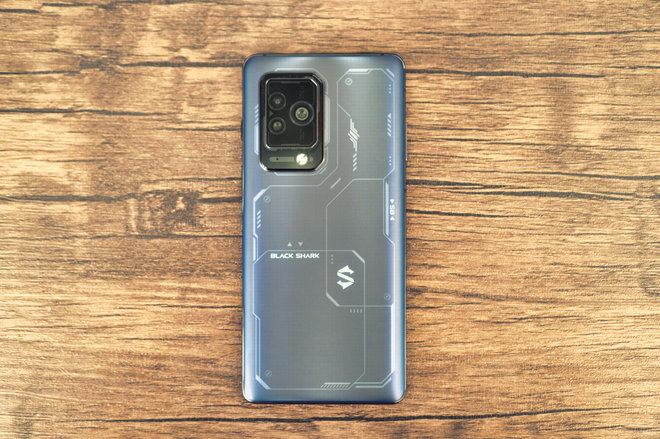 It’s worth mentioning, as well, that the included TPU case is fairly nice looking. This tends to be important with gaming phones, where third-party options are severely limited.

There’s also a high-gloss metal frame around the edges, which is much more fingerprint-prone, but we think it’s attractive and gives the device a premium look and feel. The pop-up physical triggers and their respective sliders make an appearance here, and they seem largely unchanged from the previous model, but we loved them then and we continue to on the 5 Pro. 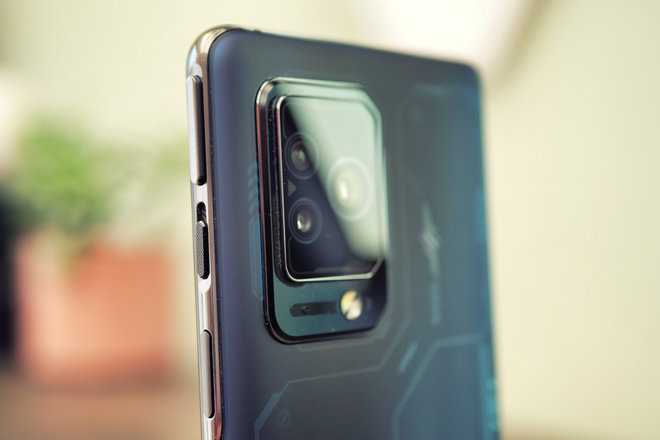 As before, the triggers are highly configurable whether you’re gaming or not. We liked using ours to toggle the torch on and off, as well as using one as a physical shutter button for the camera. Of course, they’re mainly intended for gaming use and they perform flawlessly in that regard.

We much prefer the physical triggers to their capacitive touch rivals. While both work well, there’s something about that physical feedback that makes them feel much more satisfying to use.

Just as the benefits prevail, so do the gripes, however. We found ourselves accidentally ejecting the triggers frequently on the Black Shark 4 Pro, and the same thing happens with the 5 Pro, too.

It’s not a big deal, but it’s slightly annoying – especially when you accidentally trigger the torch and are walking around with a glowing pocket all evening. Still, it’s a small price to pay for having one of the most satisfying fidget toys in your pocket at all times. 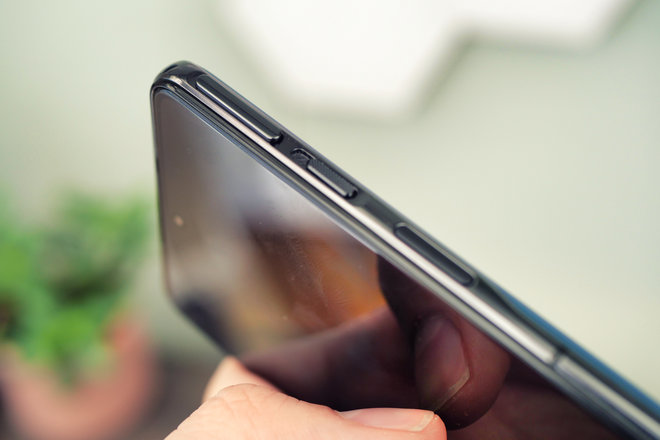 The fingerprint scanner seems to have remained the same on this model, too. And, as before, it works well, but it’s still very easy to accidentally unlock your phone, and will sometimes register your palm as a failed fingerprint when pulling the phone from your pocket.

One thing that’s notably missing from this model is the 3.5mm audio socket. It’s not something that’s surprising on a modern smartphone, but, for a gaming-focused device, it’s pretty unusual. We’re just fine using Bluetooth earphones, but many hardcore gamers won’t want the added latency, so, for some, it might be a dealbreaker.

The display is another area which seems to be unchanged from its predecessor. It’s big, smooth and can get exceptionally bright.

We loved using it for just about everything, but, of course, it excels when it comes to gaming and media consumption. One aspect that has improved since we reviewed the previous generation, is that we now have way more control over the colour rendering of the panel.

In the settings, you can select between standard, saturated and natural profiles, with the option of cool, warm or custom colour temperatures for each. 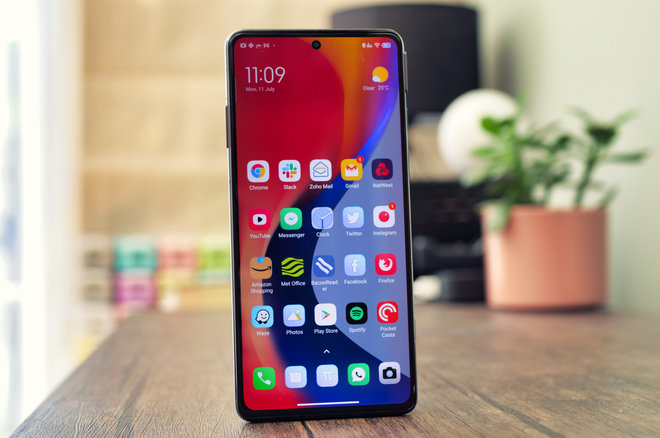 The speakers, meanwhile, are truly exceptional. We reckon they might be the best-sounding speakers ever to feature on a smartphone – and the fact that the Black Shark 5 Pro is ranked number one on DXOMark’s audio testing backs that up.

The soundstage is incredibly wide, and the positional accuracy is wonderful for games like PUBG Mobile. There’s plenty of low-end grunt and clean treble, with detailed mids.

Honestly, we’ve heard worse from low-end Bluetooth speakers. It can get louder than most would ever need, too. 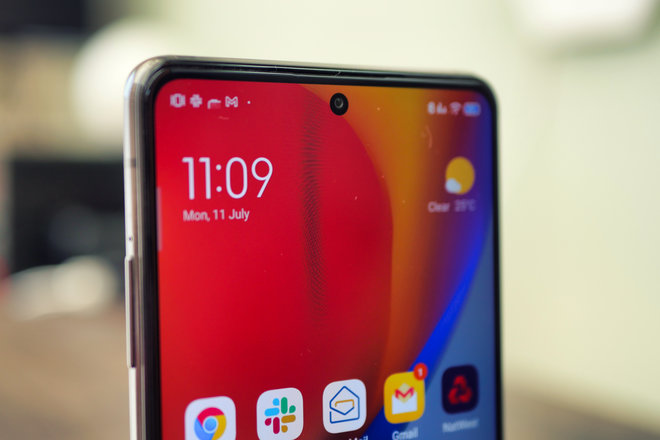 Whether this impressive speaker performance matters to you is another story entirely, of course.

Most serious gaming or content consumption tends to be done with headphones, but, for the times when you’re using the phone speaker, it’s certainly nice to have.

The Black Shark 5 Pro runs Android 12 with a JoyUI skin on top. As with previous Black Shark releases, it’s essentially a tweaked version of Xiaomi’s MIUI with added gaming features. So, anyone familiar with MIUI will be in for very few surprises. 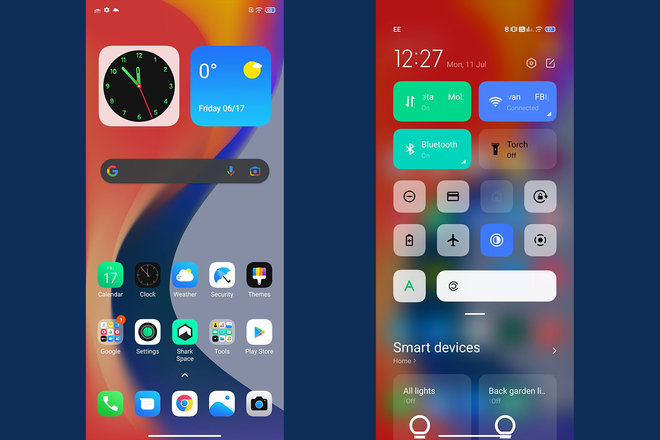 On the whole, we found JoyUI to be reliable and easy to use, aside from a few minor niggles.

One of them, we feel, is that the system serves up too many notifications about clearing cache and deleting unnecessary files. This is the kind of thing that would come in handy later in the phone’s life, but when you have a brand new device with ample storage, it’s just a tad irritating.

We also didn’t like that some of Xiaomi’s default apps for essential things like managing files and video playback contain adverts. It’s the kind of thing we expect from an entry-level phone, but it shouldn’t be present on a flagship powerhouse like this. It’s easy enough to switch over to Google’s ad-free counterparts, of course, but it’s worth mentioning. 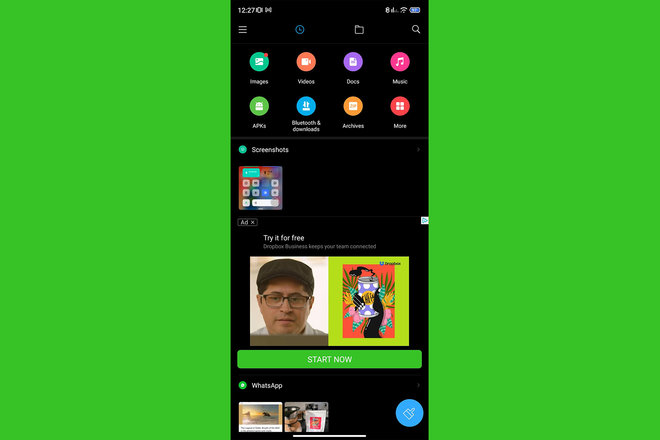 When it comes to gaming, the Shark Space menus are full of interesting and useful options for enhancing gameplay, as well as squeezing the most out of the SoC and internet connection. We thought ‘Magic Touch’ was particularly novel, allowing you to use a hard press on either side of the pressure-sensitive display as an additional macro trigger.

You can even map the physical tilting of the phone to on-screen button presses, which wasn’t especially useful for us, but cool nonetheless.

As you might expect with a Snapdragon 8 Gen 1 phone, gaming performance was solid throughout our testing. Despite the lack of active cooling, the phone never got uncomfortably hot, and Black Shark’s dual vapour-chamber design does an admirable job of limiting thermal throttling.

Battery life was also sufficient for general use, easily getting us through the average day with juice to spare, but lengthy gaming sessions shorten that lifespan significantly.

The saving grace here is that charging is complete in a flash. The included 120W wall charger takes you from flat to full in about 15-minutes, which is pretty much on par with the 150W Realme GT Neo 3. It’s impressive stuff.

As is usually the case with this kind of phone, the main shooter is the most interesting, with the other lenses being somewhat less impressive, so let’s start by getting the auxiliary cameras out of the way.

The 5MP macro is the same as the one on the Black Shark 4 Pro, and, while it’s noticeably better than the 2MP variant that’s found on so many similar devices, the low pixel count and lack of sharpness hold it back from being especially useful. 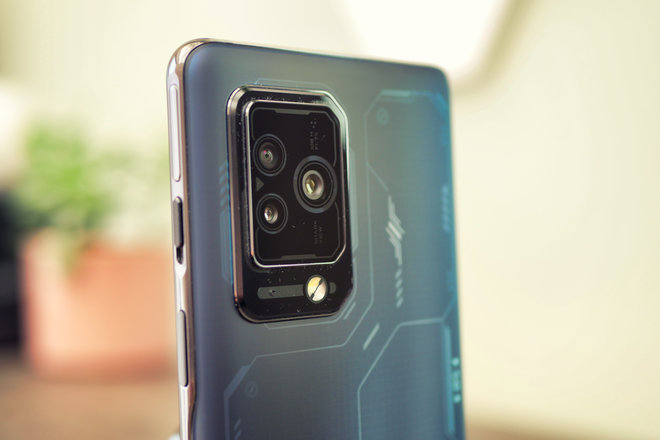 The 13MP wide, on the other hand, is pretty decent. There’s a prominent colour shift towards the duller and cooler end of the spectrum when compared to the primary sensor, but the details are much sharper and clarity is better than that offered by the wide cameras on similarly-specced devices.

The selfie camera doesn’t disappoint, either. It’s far from the most impressive that we’ve used, but, in good lighting, there’s plenty of detail and the colours look natural and lifelike.

The 108MP main, meanwhile, sounds incredible on paper. However, as we’ve learned so many times before, a high megapixel count doesn’t always mean better results. Thankfully, the main shooter is fairly solid and, considering it’s not a photography-focused device, it’s more than capable of capturing good images.

The portrait mode offers surprisingly good cutouts, too, especially with human subjects – something that gaming phones have often struggled with in the past. The night mode is fairly impressive, even.

For all but the most critical eyes, the Black Shark 5 Pro is reliable snapper that won’t disappoint. So long as you remember to turn off the watermark, which is activated by default.