Especially newer versions of Windows include a large number of pre-installed applications. While some are certainly useful, including all-time classics such as Notepad, Paint or Calculator, others, such as 3D Builder, Clipchamp or Mixed Reality Portal may be largely ignored by Windows users.

Bloatware Removal Utility is not the first tool of its kind. I reviewed programs such as Decrap in the past that targeted manufacturer bloat, including paid program inclusions, for the most part. Scripts like Windows10Debloater were created specifically for Windows 10 and newer versions of Windows to address the increasing number of apps that Microsoft added to its operating systems by default.

Bloatware Removal Tool is provided as a batch script and other files. It has a graphical user interface that is easy to use, even for beginners.

The portable program lists all installed applications in its interface. Each program is listed with its name, version and publisher. An option to open the program folder or main executable file is not provided; these would be useful for double-checking certain applications.

The length of the list depends on past activity. If lots of software is installed on the device, the list will be long. The handy “toggle suggested bloatware” button checks bloatware that the application identifies based on a list of bloatware apps. The number of selected items is displayed in the status bar.

An option to display checked items only is missing, which makes verifying the selection cumbersome, as you have to scroll the entire listing to find all checked items. A click on show/hide console provides a listing of these applications, however. 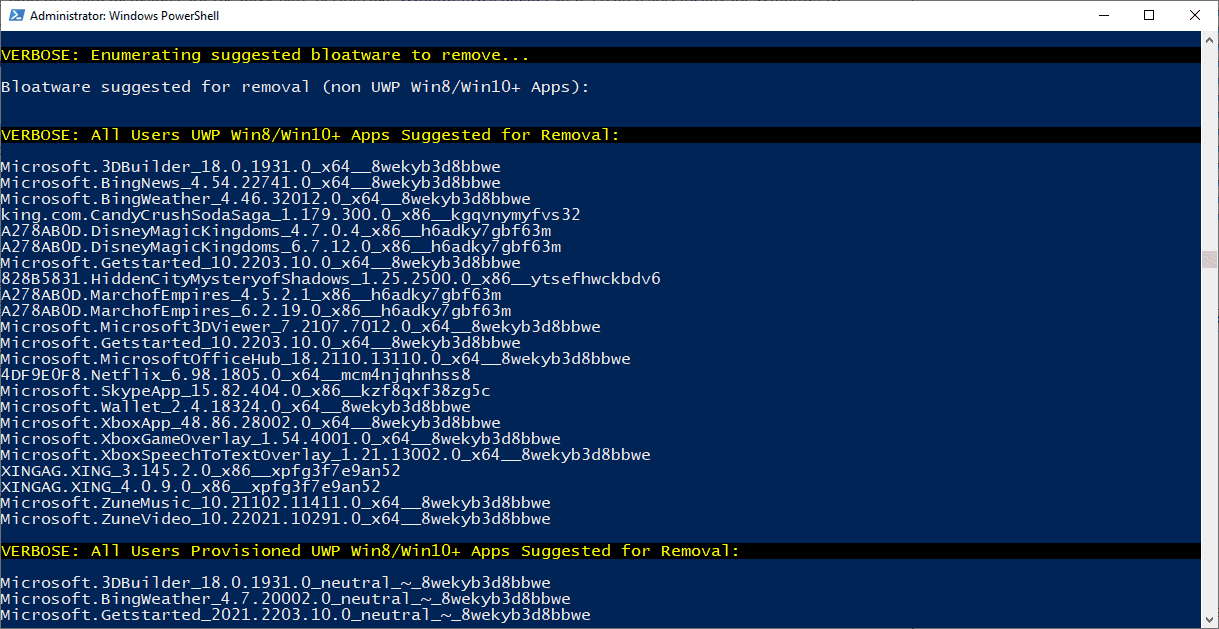 Apps such as Candy Crush Saga, Netflix, Microsoft 3D Builder, Disney Magic Kingdom, or March of Empires were selected by default on a Windows 10 test system.

The application creates a system restore point when users hit the remove selected button in the interface. It sets automatic application downloads to off for recommended apps, and sets the new default Start Menu layout for new users. All three options can be turned off under the Options menu in the interface.

The View menu displays several filtering options. You may use it to hide Microsoft applications and UWP applications.

Bloatware Removal Utility is a useful program for Windows. It works well on first run of the system to remove all apps that are not needed on a system, but it may also be run later to remove apps or installed programs from systems.