As climate change continues to push industries into a carbon-neutral world, the need for renewable energy systems is growing rapidly. Technology like chemical batteries and battery-powered machines are in high demand. Due to the increase in the need for lithium, there is a supply crunch for these types of batteries. This is why BLUETTI started looking into using sodium instead of lithium, for their next generation of power stations. Sodium and lithium are the closest metals in the same group with very similar chemical properties, and there is over one thousand times the sodium than lithium in the Earth’s crust. Now BLUETTI is unveiling the world’s first sodium-ion solar generator.

BLUETTI is the world’s leading manufacturer of solar energy products like generators, photovoltaic panels, and related accessories. In the most recent two years, BLUETTI has launched residential power stations like the AC200P, EP500, and AC300. These products have been a favorite among consumers and continue to be some of the best power stations on the market. Now, BLUETTI ventures to integrate the innovative sodium-ion battery technology into its upcoming solar products.

This new sodium-based technology will make its first appearance in the world’s first sodium-ion solar generator-NA300. Along with this generator, they will be launching a compatible battery pack – B480. 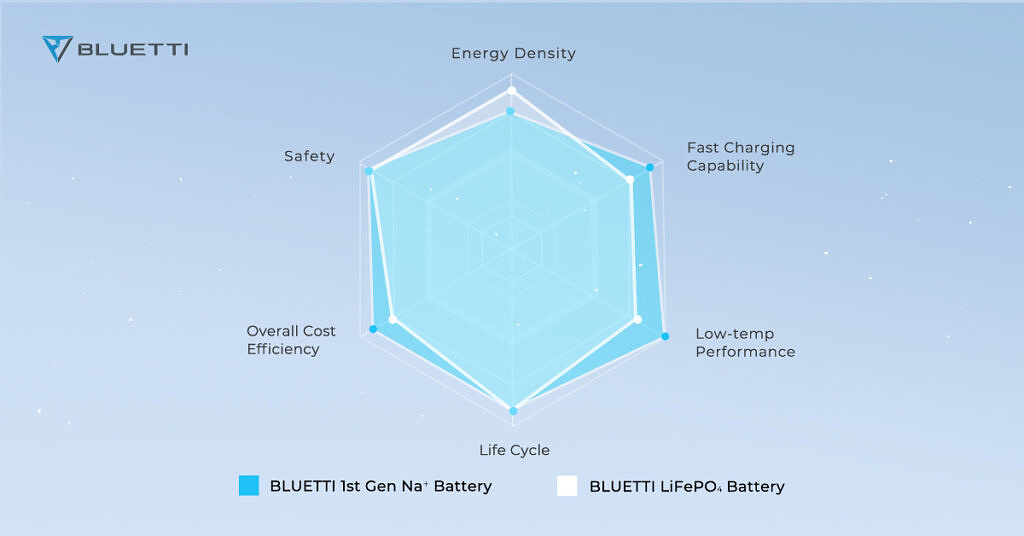 The NA300 Solar Generator and B480 Battery Pack

These new products will have the same style and appearance as the previous options like the EP500 Pro. You’ll find four 20A plugs and one 30A L14-30 output port driven by the built-in 3,000W pure sine wave inverter to juice up most household electrical appliances. The NA300 will see an upgrade over the EP500 Pro’s incredible 2,400W solar input to 3,000W. This could end up being the fastest charging solar generator since it can be recharged from 0% to 80% in a short half-hour using 6,000W swift AC + PV dual charging.

While there are many benefits to the new sodium-based technology, it comes with its limitations as well. The NA300 provides a capacity of 3,000Wh, less than the 5,100Wh of EP500 Pro. Despite them being the same size, the current sodium-ion battery technology limitations result in a smaller capacity. You can get a significant increase in capacity by pairing up to two B480 battery modules (4,800Wh each) for a whopping total capacity of 12,600Wh. This can provide the average family with up to a week of emergency electricity if the power goes out.

The first-generation sodium-ion battery rivals the LiFePO4 battery cells widely used in other BLUETTI products in security and long cycle life except for the low energy density; yet the former excels in terms of cost, low-temperature performance, quick-charging, and other electrochemical aspects because of its chemical characteristics. BLUETTI’s sodium-ion battery can charge in less than 30 minutes to 80% SOC at room temperature. Besides, in a low-temperature environment of -20°C (-4℉), this sodium-ion battery pack in NA300 and B480 has a capacity retention rate of more than 85% and provides a system integration efficiency of over 80%, which is perfect for powering in winter or in regions with extremely low temperatures.

Find out more information about all of BLUETTI’s products at www.bluettipower.com.