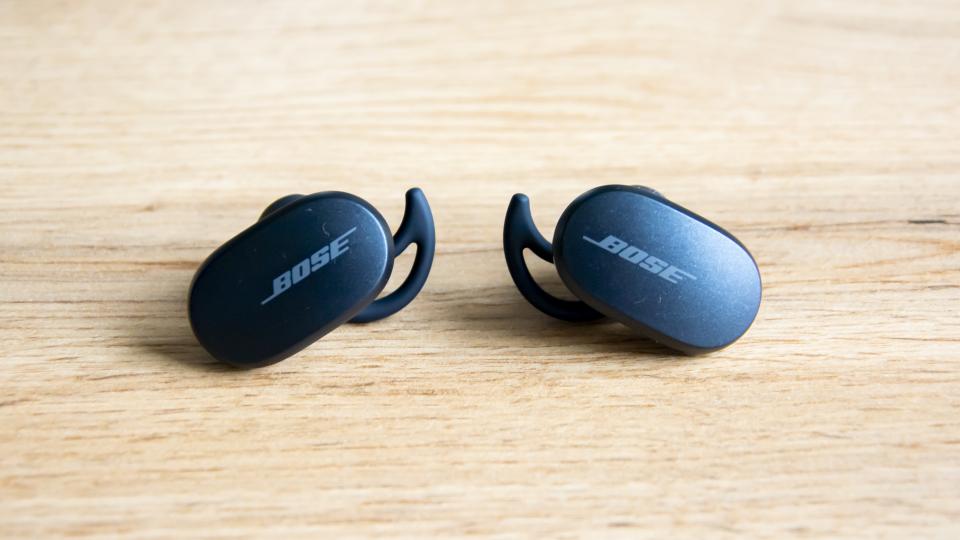 Given that Bose is practically synonymous with noise-cancellation technology, it’s surprising we’ve had to wait so long for the QuietComfort Earbuds. Apple and Sony have had ANC buds out for a while now, while Libratone, Huawei and Sennheiser are among a number of other brands with impressive options available.

But sometimes being late to market can pay off and that’s undoubtedly true of the QC Earbuds. They deliver best-in-class ANC coupled with first-rate audio, setting a new gold standard for ANC earbuds in the process.

Bose QuietComfort Earbuds review: What you need to know

Bose has been pioneering noise-cancelling tech since the release of the original QuietComfort over-ear headphones back in 2000, but the QC earbuds are its first true wireless earbuds to incorporate the technology. By using a combination of internal and external microphones, the buds monitor environmental sound and create an opposite sound wave to cancel it out via a process known as destructive interference.

They connect to your device wirelessly via Bluetooth 5.1 and support the two most widely-used audio codecs, SBC and AAC. There’s IPX4 certification for sweat- and water-resistance, meaning you’re good to use them while working out and they’ll be fine if you get caught out in the rain.

Like all true wireless earbuds, the QuietComfort come with a portable charging case. It provides two full charges of the buds, which have a stated battery life of up to six hours, so you’ll get roughly 18 hours playtime in total – a little disappointing by current standards. The case can be fully charged from empty in three hours via USB-C, while 15 minutes on charge will see you good for a further two hours. It also supports wireless charging if you own a Qi charging pad. 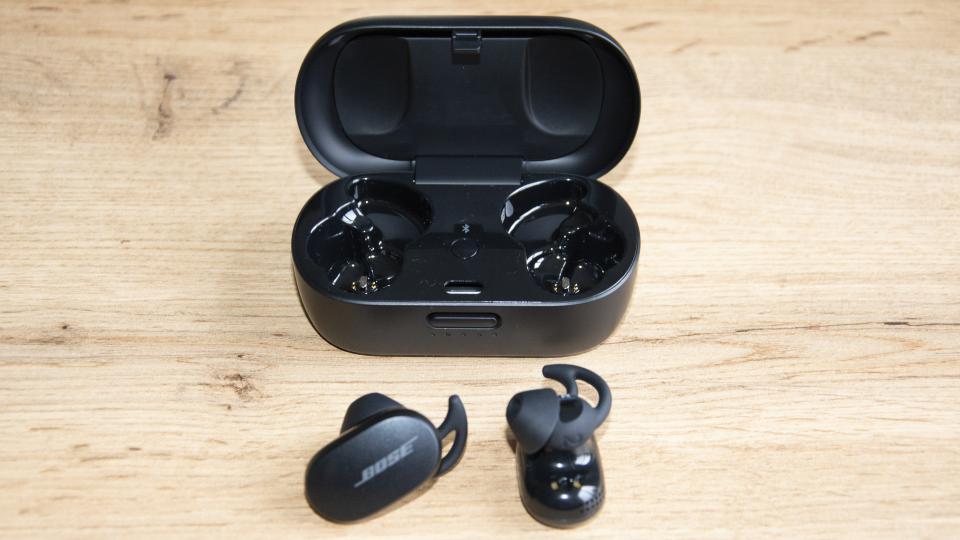 The true wireless earbud market is extremely crowded. Just about every big audio brand has a pair in its product line up, with many now offering active noise cancellation. Among the most expensive ANC earbuds are the sonically superb Sennheiser Momentum True Wireless 2 (£279) and Apple AirPods Pro, which have an RRP of £249 but are often found closer to the £200 mark.

Less pricey alternatives include our favourite all-rounders, the Libratone Track Air+ (£179), Huawei’s FreeBuds Pro (£170) and the Sony WF-1000XM3 (£169). The latter two options are incredibly clever and capable of automatically adjusting your ANC level based on the level of external sound in your environment.

Cheaper still but not quite so smart are the Panasonic RZ-S500W, available for £150, and the Urbanista London, which typically cost £129 but were retailing for under £100 at the time of writing.

The QuietComfort Earbuds see Bose forgo stems in favour of a curved, touch-sensitive housing that bears a passing resemblance to a miniaturised Bluetooth headset. Each earbud weighs 8.5g, which is heavier than most on the market, while the housing measures over 3cm long and 2cm wide.

The sections that go in your ears feature silicone eartip and wingtip combos that simultaneously seal off your ear canal to provide excellent passive noise cancellation while firmly securing the buds in your ears. The eartip and wingtip are one complete entity rather than two discrete pieces meaning you can’t mix and match but I found the medium-sized option of the three provided fitted perfectly. The overall aesthetic is not ungainly, but if it’s dainty and discreet earbuds you’re after, this isn’t the pair for you.

The charging case is equally hefty at a touch under 9cm wide, 5cm deep and 3cm tall, so you’ll have to set aside some pocket real estate for it when you leave the house. Five small LEDs show the charge status of the case, while a Bluetooth pairing button inside the case allows you to put the buds into pairing mode and connect to a new device.

Touch controls are activated by tapping anywhere on the top two thirds of either earbud (there are no sensors in the bottom third). Controls aren’t quite as extensive as I’d like, with no way to change volume or return to the start of the track you’re listening to.

A double tap on the right earbud plays and pauses your audio, while double tapping the left bud cycles through three ANC presets, which you can personalise within the Bose Music companion app. Hailing your preferred voice assistant is done by pressing and holding the right earbud and you can assign either “Hear Battery Level” or skip to the next track to the same action on the left bud.

Although it’s disappointing the ability to change volume was omitted, I have no complaints about the responsiveness of the QC Earbuds’ touch controls: they registered my inputs without fail and were very simple to memorise.

Housed inside the right earbud is a microphone array that picks up and transmits your voice when on calls. I was told clarity was excellent by those I spoke to, though a couple of people reported that they could hear me breathing, an indication of just how sensitive the microphone array is. I recorded a number of voice clips to see how effective the mic was myself and was mighty impressed. The earbuds accurately communicated the intonation of my voice and speech never sounded muffled or distant.

The QC Earbuds have a couple of other tricks up their sleeve, too. There’s an automatic pause/resume function when you take the buds out and put them back in and they’re also compatible with the Bose Music app, which grants you access to a handful of useful options. You can choose how much of your voice you want to hear when on calls, select a specific voice assistant and toggle on or off the various in-ear detection features. There are no EQ options on offer which is a shame but, as you’ll read in the audio quality section, they’re not really required. 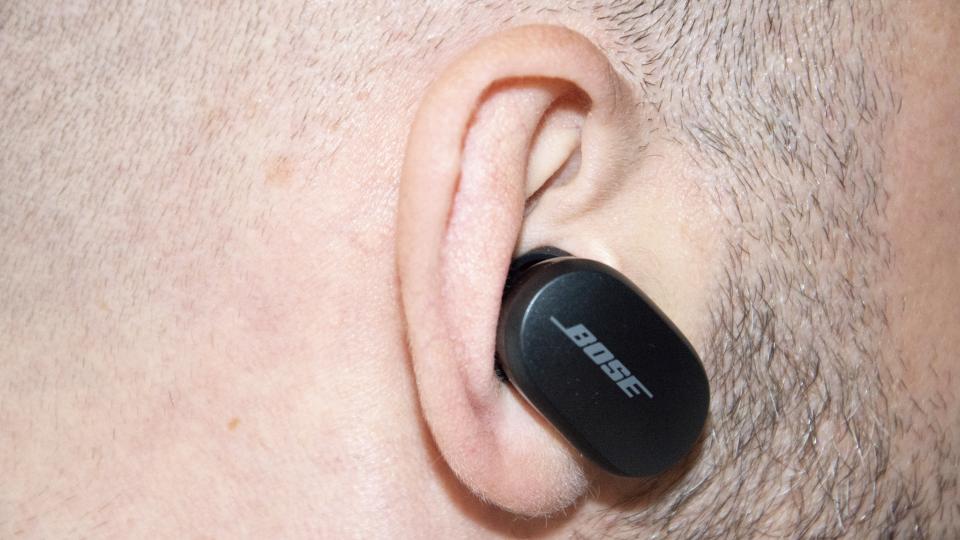 There are 10 levels of ANC to choose from, with 0 functioning as a transparency mode that enables you to clearly hear sounds in your surroundings. As you move up the 10-point scale, the noise-cancellation becomes increasingly comprehensive and at 10, only the loudest and highest-pitched sounds disturb your listening experience. At these high levels, I found myself triple-checking for traffic when crossing roads, such is the prowess of the QC Earbuds’ ANC.

Compared with the Huawei FreeBuds Pro, which I reviewed recently, the QC Earbuds put a slightly bigger dent in low-end frequencies and are more capable when it comes to reducing mid-range and high-pitch frequencies, too. The difference isn’t huge, but it’s noticeable when you’re strolling down a busy street or sitting in your living room with various household appliances whizzing and whirring around you.

One thing they aren’t capable of doing is automatically adjusting your ANC level based on your surroundings, something the FreeBuds Pro and WF-1000XM3 both offer. That lack of ANC smarts doesn’t prove an issue though, as you can create three noise-cancelling presets to cater for the various environments you find yourself in. I stuck with the default settings for the majority of my time testing the buds, with the three levels set at 0, 5 and 10. Switching between them couldn’t be easier: simply double tap the left bud twice to cycle through your options.

Pleasingly, there’s no hint of hissing or crackling when ANC is engaged, which is an issue that often plagues less capable headphones incorporating the technology. 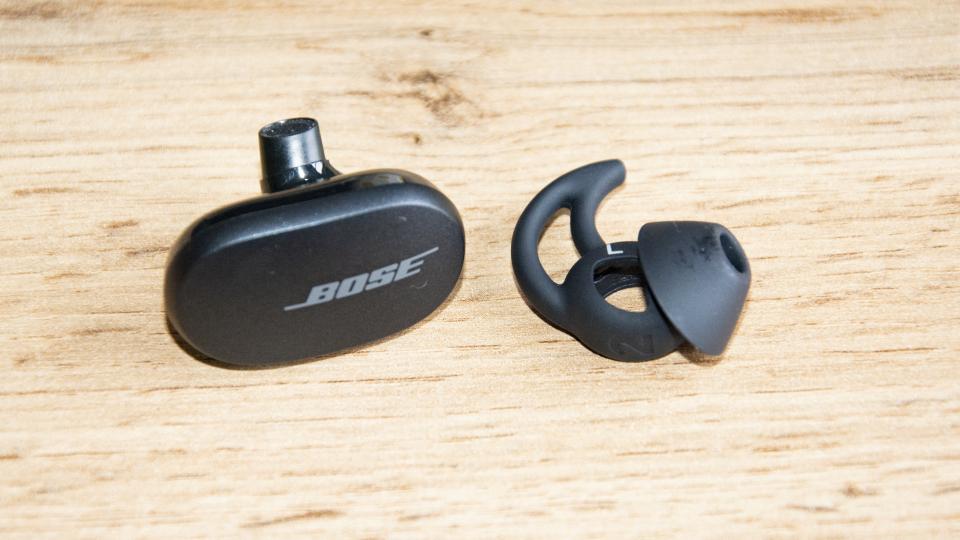 The first thing that hit me when listening to music through the QC Earbuds was the expansiveness of the soundstage. Rather than feeling like music is being pumped directly into your ears, it feels as though sound is coming at you from various angles, resulting in an extremely immersive listen. It also prevents the QC Earbuds from ever becoming claustrophobic and gives them a very natural sound.

There’s a great sense of balance underpinning the sound profile, with individual aspects of tracks given room to shine without overshadowing one another. Everything feels expertly controlled, with pinpoint instrument separation and oodles of detail. While listening to The Calling’s “Adrienne” the various layers of the song – guitars, drums, percussion, lead vocals and backing vocals – knitted together superbly to create an engaging, cohesive reproduction of the track.

That cohesion benefits enormously from how smartly the earbuds handle bass reproduction. There’s enough there to drive bassier tracks forward but it never strays into territory where it’s in danger of muddying the overall experience. Those seeking truly beefy bass may find the QC Earbuds fall slightly short of their expectations but personally, I’d take their balance over bass every time.

You can enjoy that beautiful balance regardless of volume thanks to Bose’s Active-EQ technology. As you drop the volume down, the earbuds automatically boost the bass to prevent tinniness creeping in. High-end frequencies receive a boost, too, so you’re never left feeling the buds are artificially overcompensating.

The technology works well and given how good the ANC is, I found myself more than happy listening at volumes a lot lower than I usually would. When I did decide to pump up the volume, there was no sign of any distortion: the QC Earbuds’ delivery remained measured and engaging.

The QC Earbuds are a fitting addition to the already-excellent QuietComfort series. Their ANC capabilities are unmatched in the true wireless earbuds realm, so if you’re after the absolute best noise-cancellation around, there are no two ways about it: these are the buds to buy.

They’re not perfect – battery life could be better and touch controls are a little limited – but they excel in the areas that really matter, with fantastic audio quality and a comfortable fit backing up the class-leading noise-cancellation.