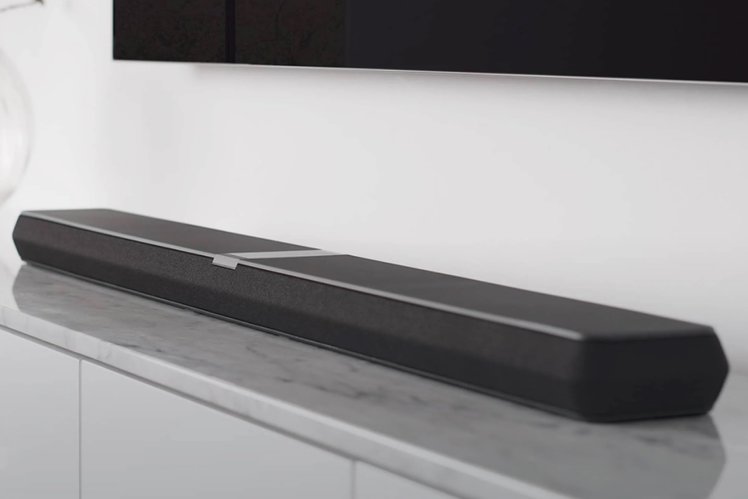 With the Panorama 2 hitting shelves nearly a decade ago, this is also far from being the only notable addition. The last model didn’t even feature an HDMI port in the connections hub, after all.

Since you can’t add a subwoofer or rear speakers here, however, the Panorama 3 has a tough assignment – it’ll need to deliver immersion and bass without help.

Plus, as we’ve seen with the audio giant’s Formation Bar, a lofty price tag doesn’t necessarily mean this premium experience is a given.

So, does the Panorama 3 have what it takes in the sonic stakes, or is this one to skip over? We’ve been testing in order to find out.

The Panorama 3 sports a sleek and minimalist design. It’s attractive, but also discreet enough to not draw attention to itself while under your TV. The build quality is excellent, with a perforated top covering the up-firing drivers and a wrap-around fabric grille present for the front-firers. 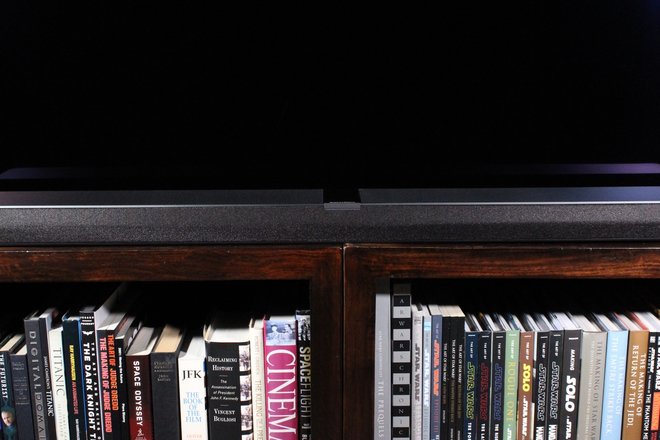 The overall finish is matte black, but there’s a small glossy central section on the top, where you’ll find some basic touch-sensitive controls that light up when you pass your hand nearby. There’s also a microphone for the built-in Alexa support, but, strangely, there’s no display on the Panorama 3.

Overall, the width of this soundbar means it’s more suited to larger screen sizes (55-inch and above), but, at only 65mm tall, it shouldn’t block the screen when placed in front of any TV. If you don’t want to use a stand, and would rather wall mount, B&W includes a bracket and template for that purpose.

The Panorama 3 isn’t just minimalist in terms of its design – B&W has also stripped back the connectivity. However, it should be sufficient for most people, with the single HDMI connection supporting eARC (enhanced audio return channel), and, thus, allowing you to send lossless audio back from your TV. 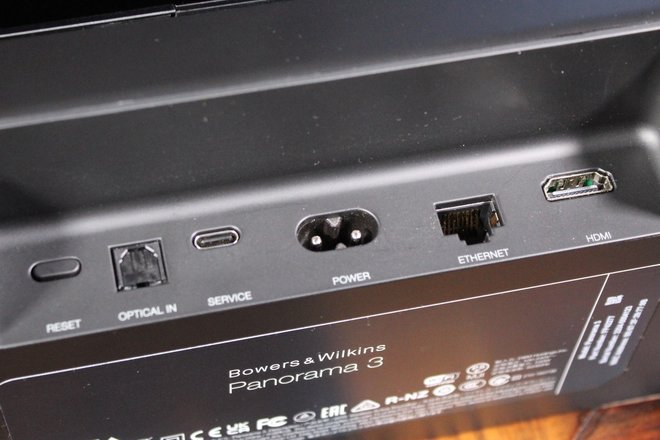 The only other physical connections are an optical digital input, which is for anyone with a TV that doesn’t support ARC, an Ethernet port for those who prefer a wired internet connection, and a USB-C port, although this is for service only. Unfortunately, there’s no subwoofer output, so you can’t connect a separate sub and boost the bass performance.

In terms of wireless connectivity, the choice is fairly extensive, with built-in Wi-Fi, Apple AirPlay 2, Spotify Connect and Bluetooth 5.2 with aptX Adaptive, AAC and SBC. Strangely, the Panorama 3 doesn’t support B&W’s Formation multi-room system, so you can’t connect it to a network of devices throughout your home, nor can you add wireless rear speakers or a subwoofer.

When it comes to controlling the soundbar, it’s important to note that there’s no remote included in the box. If your TV supports HDMI-ARC, though, this isn’t really an issue, because you can use its zapper instead. If you’re connected via the optical input, you also have the option of using the B&W Music app to learn your TV’s commands. 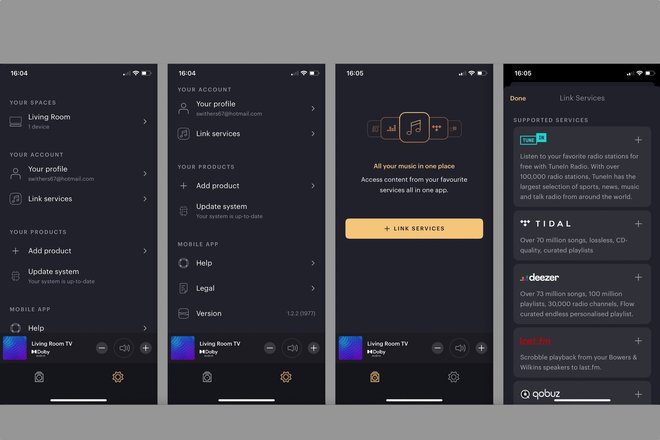 This app, shown above, is clean and simple. Not only does it provide basic controls and a degree of feedback in the absence of a front display, but it also allows you to link your streaming service subscriptions in order to access them directly. The app currently supports Qobuz, Tidal, Deezer, TuneIn, Last.fm, NTS and SoundCloud.

Other options include the touch-sensitive controls on the bar itself, which support basic functions such as volume up/down, muting the Alexa microphone, and playing or pausing audio. That built-in Alexa support also means that you can achieve some basic voice control over the soundbar, and access to all the other delights of the smart assistant, such as home control.

The Panorama 3 might be fairly big for a soundbar, but that also means it’s able to house a decent array of drivers and some serious amplification. The 3.1.2-channel configuration comprises three front-firing speakers (left, right and centre), plus a pair of up-firing speakers for the top-left and top-right. These are driven by 400W of powerful and responsive Class D grunt.

The three forward-firing speakers are each composed of a decoupled 19mm titanium-dome tweeter and a pair of 50mm midrange drivers, each with woven glass fibre cones. The height channels are created by a pair of 50mm Atmos drivers, meanwhile, which also use woven glass fibre cones, while the ‘.1’ component of the system is generated by a pair of 100mm woofers. That’s 13 drivers in total.

The Atmos speakers are angled upwards and bounce sounds off the ceiling to create the illusion of overhead channels. How effective this approach is will depend on the height and reflectivity of your ceiling, but, in our testing room, the Panorama 3 was successful in creating overhead effects. The size of the bar also gives the soundstage plenty of sonic width.

While this impressive speaker arrangement has plenty of power, though, there’s no automated room correction, and there are only limited controls for those who want to optimise the performance of the Panorama 3 based on the layout of the room. Thankfully, at least based on our experience, the soundbar is very versatile and can be placed in most spaces with minimal issues. 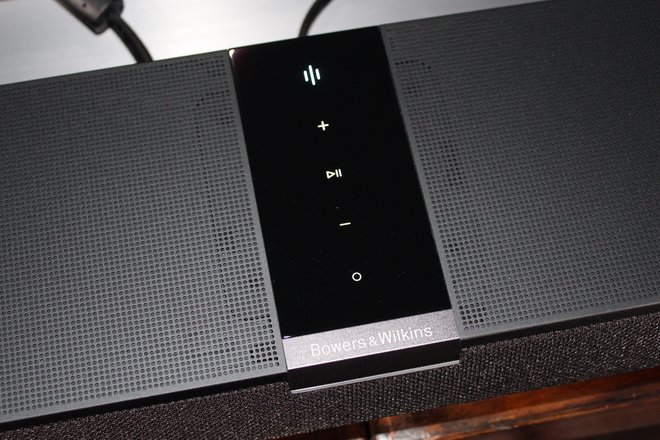 It skilfully handles music, with some excellent stereo imaging thanks to its width, and a tone that is both naturalistic and balanced. The woofers are perfectly integrated into the rest of the system, too, resulting in the bass being tight and responsive, while the overall performance is highly convincing. If you plan on using this bar to listen to music, you won’t be disappointed.

The B&W remains impressive when it comes to TV shows, as well, where the addition of the dedicated centre speaker ensures dialogue is clear, focused and nicely articulated. Meanwhile, the left and right speakers render music and effects with detail and precision, spreading them across the front of the room, and the woofers add a degree of low-end depth to the overall soundstage.

Unsurprisingly, things step up a level when you move to Dolby Atmos soundtracks. And while the film Moonfall may be utter nonsense, it does boast an incredibly immersive, object-based soundtrack. The Panorama 3 moves sound seamlessly around the front of the room, and the woofers add bass impact during the scene in which a space shuttle launches through a tidal wave (yes, really).

There are some decent overhead effects created as the heroes of Moonfall fly inside the moon, and the various audio objects are steered around with precision, helping to create a sense of scale within zero gravity. The woofers prove surprisingly capable, allowing this single unit to deliver a decent low-frequency response that goes down to a claimed 43Hz. 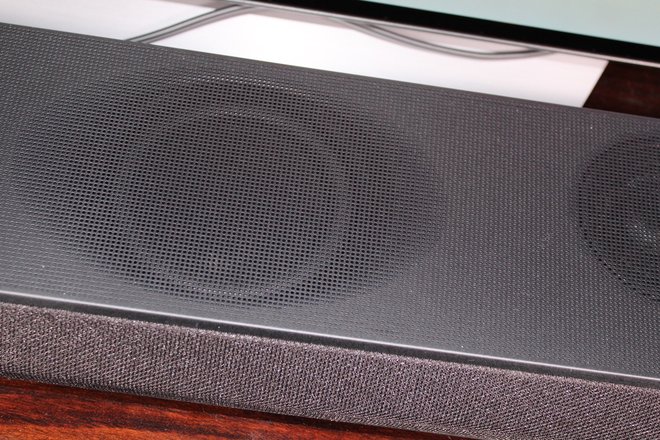 We found the amplification can be driven hard without running out of steam or sounding harsh and distorted, too. There’s sufficient juice to drive all the speakers simultaneously, like in an aggressively mixed soundtrack such as Moonfall, where all the channels are often employed to create a sense of three-dimensional space and greater immersion.

The Panorama 3’s main weakness is the same as any single-unit soundbar – it has a front-heavy soundstage with no real surround effects. This is to be expected, given the lack of rear speakers, but it still obviously limits the bar’s ability to fully immerse you. In addition, while the built-in woofers are good, they can’t compete with a separate sub when it comes to really deep bass extension.

None of this is surprising, as we say, but the inability to expand the system by adding rear speakers and a sub does mean you can’t address these limitations. If all you want is a single-unit solution, the B&W is an accomplished performer. However, if you’re looking for greater immersion, or at least the ability to add it later, you’ll need to look elsewhere.

Finally, while the Panorama 3 supports all the main Dolby formats including TrueHD and Atmos, there’s no support for DTS:X or IMAX Enhanced. However, given the limited availability of these sound formats, the lack of an HDMI input, and the inability of many TVs to pass DTS these days, it’s probably not a big deal for most people.