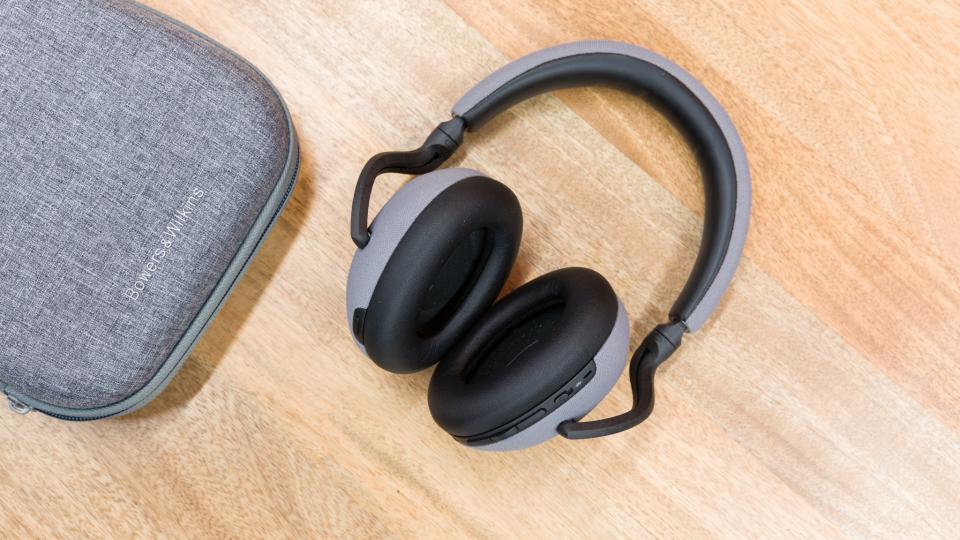 They started off a mite too expensive for our taste but you can now grab hold of a pair of Bowers & Wilkins PX7 in silver or space grey for over £70 off the list price. These are amazing sounding headphones and, at this price, we can’t think of any reason not to buy them. Amazon Was £350 Now £279 Buy Now

A few years back it seemed British firm Bowers & Wilkins had the high-end headphone market all sewn up. Back then there was far less choice, but, for a while, B&W’s P3 and P7 headphones were the earwear of choice for the discerning audiophile on the move, at least in the UK.

But then, accessible, effective noise cancelling and decent sound quality took over from pure sound quality and many customers jumped ship to Sony and Bose. Bowers has now hit back with the Bowers & Wilkins PX7, a pair of hugely capable ANC headphones.

Bowers & Wilkins PX7 review: What you need to know

Not only are they the most comfortable over-ear headphones Bowers & Wilkins has made for years, but they also come with all the features you’d expect of a top-end modern pair of headphones. They have variable strength active noise cancelling along with proximity sensors that auto-pause the music when you take them off, then resume it when you put them back on again.

They fast-charge via USB Type-C, giving you up to five hours playback from 15 minutes of charging, and a huge 30 hours of playback from a full charge (with ANC). Plus, they’re the first headphones we’ve tested to feature the new aptX Adaptive Bluetooth codec – Qualcomm’s latest attempt to improve the Bluetooth wireless audio experience.

The PX7 are high-end headphones and the list price is an accordingly high £350. That’s a price that has already fallen to £279 on the silver and space grey models, though the carbon edition – available from October 2020 – will retail at £350.

Something similar has happened to all the main competitors in this space. The Sony WH-1000XM3 were our favourite over-ear noise-cancelling headphones for a long while but have recently been replaced by their successors, the WH-1000XM4. The last generation model is now available at a price that sits between £230 and £270, while the most recent release will set you back £349. The Bose QuietComfort 35 Series II, although not our current favourite pick, are still brilliant noise-cancelling headphones and are available at a tempting £260 – £70 less than the original list price of £330.

Even the recently released Bose Noise Cancelling Headphones 700, which have the same list price as the PX7 (£350) have seen price cuts of late to around £300.

At such a high price, the PX7 certainly have their work cut out for them. In so far as build quality is concerned, however, Bowers & Wilkins has little to worry about. They’re not quite as eye-catching, perhaps, but they do feel exceptionally well made.

The space grey version we were sent sees each of the PX7’s ear cups wrapped in textured, grey fabric, topped with a matte silver oval with the Bowers logo embossed on top. The headband is half-clad in the same grey fabric, half with softly padded synthetic leather and the ear pads are similarly plush.

Also available is a space grey version, while a carbon edition, designed to highlight the headphones’ use of carbon-fibre composite reinforcement in its construction, is being released in October. That model features a carbon black finish and diamond-cut detailing on the earcups and looks extremely sleek (see below). 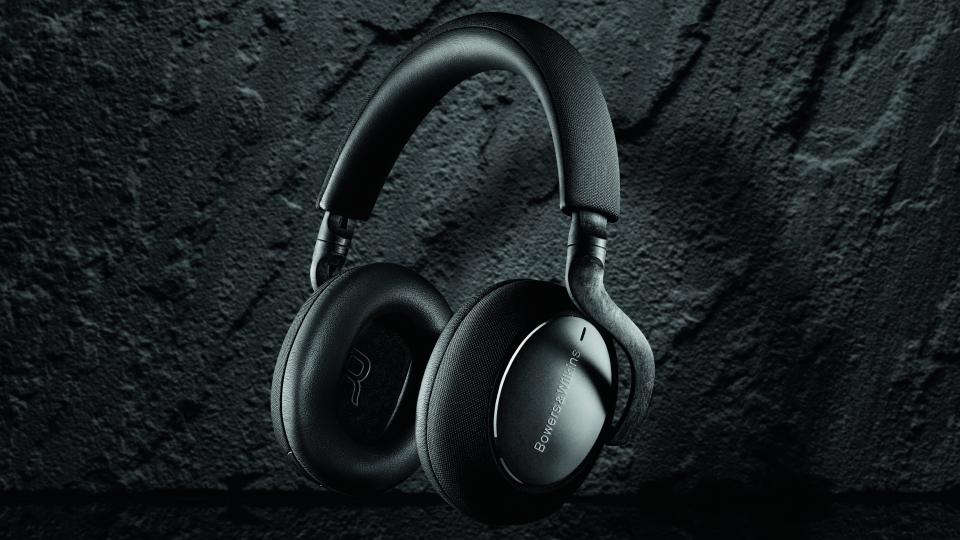 The slender stainless-steel arms of the P7 have been shelved in favour of lighter, more pliant carbon fibre struts, which reduce the clamping force of the earcups somewhat. The PX7 still exert significantly more pressure on the side of your head than the Sony WH-1000XM3 but they’re not uncomfortable. In fact, this slightly stronger grip helps them achieve better passive sound isolation because it eliminates the gapping that sometimes happens where your jaw meets the neck.

On a practical note, it’s also good to see Bowers & Wilkins has avoided the temptation to go with touch-sensitive controls on the PX7, which in my view have no place on any pair of headphones. Instead, the main controls are all physical.

They’re situated on the rear edge of each earcup. On the right are the volume up, down, play/pause buttons plus a sprung power/pairing switch; on the left is a single button, used for switching between the headphones’ various noise-cancelling modes.

The only concession to modernity, at least in terms of control, is a pair of wear sensors, located inside each ear cup. These pause and unpause whatever you’re listening to when you remove the headphones and pop the headphones into standby. They then wake up the headphones and resume playback when you put them back on your ears. This is not a particularly innovative feature, but it works very reliably and very quickly indeed.

It’s all good stuff. In fact, there’s only one thing I don’t like about the design of the PX7: they don’t stow away particularly small. You can fold them flat so they sit comfortably against your collar bones when they’re slung around your neck, but they don’t then hinge inwards to create a more compact package. 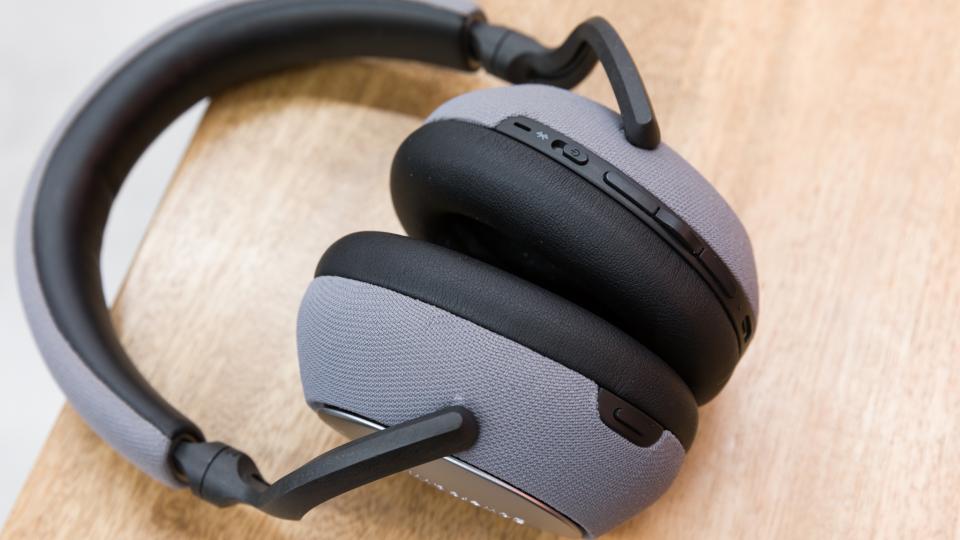 Active noise cancelling has come along in leaps and bounds since the BoseQuietComfort 35, and the PX7 is right at the forefront of technological innovation. Here, Qualcomm’s QC5100 chip is behind it all, providing what – to my ears – is class-leading, five-star ANC.

With the noise cancelling switched to “High” the PX7 kill off ambient sound with remarkable effectiveness. I travel to work each day on the London Underground’s Central Line and the section between Bethnal Green and Liverpool St station is the loudest, most raucous and demanding test for a pair of noise cancelling headphones that I can think of.

Carriages clatter along the track, wheels scream and wind roars past the windows – it’s a cacophony that was recorded at an ear-bleeding 95.2 decibels in a study carried out in 2018. Yet I barely heard a thing even while listening to a fairly quiet, conversational podcast. Even in an office environment, where the high-pitched tapping of fingers on keys and people talking often makes its way past the defences of other noise-cancelling headphones, the PX7 create an isolated cocoon, locking you away from the aural assault of everyday life. 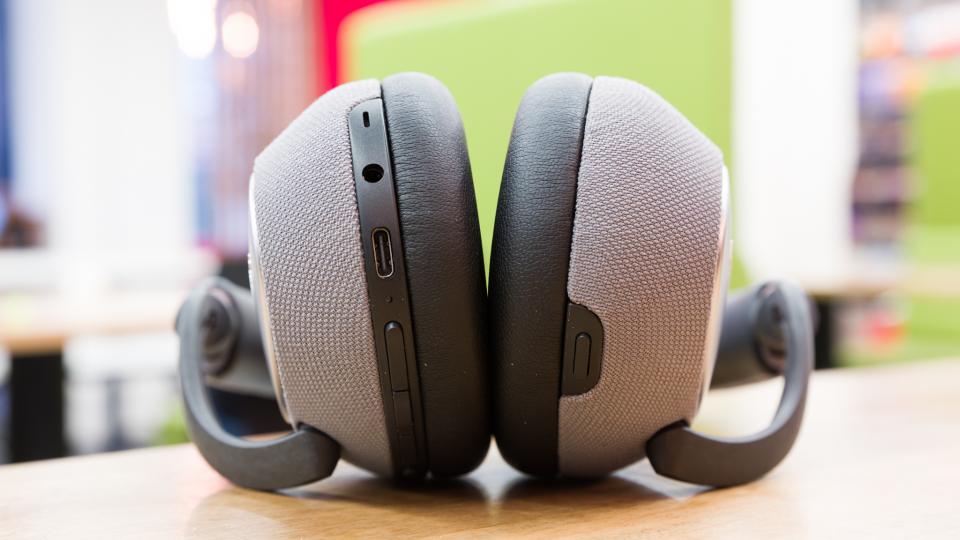 Unlike with cheaper noise cancelling headphones, however, there’s no audible hiss to be heard when the feature is enabled. So, although you can adjust the levels, I see no reason why you’d want to.

Still, the feature is there if you want to use it; all you need to do is press the button on the rear of the left earcup and toggle between the various settings. There are high, low and auto settings to choose between, with the latter monitoring your surroundings and adjusting the levels for you.

A long press of the same button, meanwhile, kicks the headphones into ambient aware mode, so you can listen in to what’s going on around you without having to take the headphones off your head. Whatever level of noise cancelling you select, sound quality isn’t affected particularly, though.

And sound quality is another key strength of the Bowers & Wilkins PX7. With the help of unusually large 43.6mm drivers and support for the latest array of Bluetooth codecs – AptX HD, AptX, AptX Adaptive, AAC and SBC all get a look in here – the PX7 are right up there with the best sounding noise cancelling headphones I’ve tested. 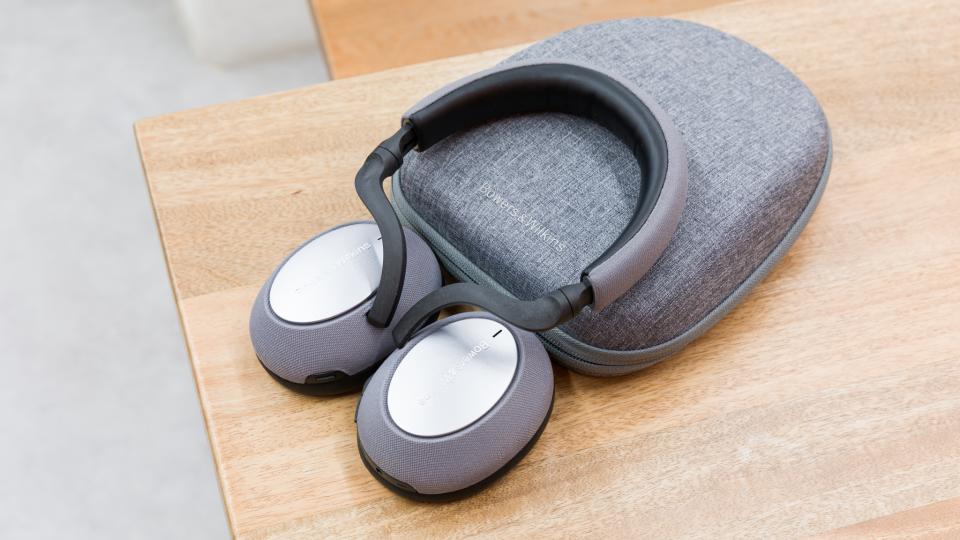 The sound profile is quite similar to that of Bowers & Wilkins’ PX headphones. This means the bass is stronger at the low end than that of its rivals, notably the Sony WH-1000XM3 and the Bose 700, and the overall impression is on the warm side of neutral. I preferred the more considered, balanced approach of the Sony WH-1000XM3, but the PX7 are fine if you want a bit more low-end grunt.

Cue up Rammstein’s “Deutschland” and, instead of a defined hit of bass as the main guitar parts kick in, there’s a veritable storm of it, which threatens to overwhelm and muddy the mids. The Sony WH-1000XM3 delivers this element with more punch and control. On the other hand, there is quite a bit more drive and dynamism to the sound of the PX7, thanks presumably to those large, 43.6mm drivers. 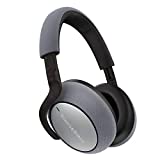 Declan Zapala’s Philomena is perhaps the perfect track to expose both the PX7’s strengths and weaknesses. As the track commences, there’s a bloomy underbelly to the sound of Zapala’s spanish guitar that sounds distracting to my ear. And, yet, there’s also a satisfying physicality and attack to the strings as they’re plucked.

One thing to note here, however, is that to hear the PX7 at their finest you need to be connected either via AptX HD or AptX Adaptive. Initially, the MacBook Pro I had the headphones connected to defaulted to SBC, which I found produced a slightly splashy sounding sound in the treble on some tracks. Switching to AAC improved things, while AptX HD playback on a Reno 10x Zoom produced the cleanest most spacious sound. 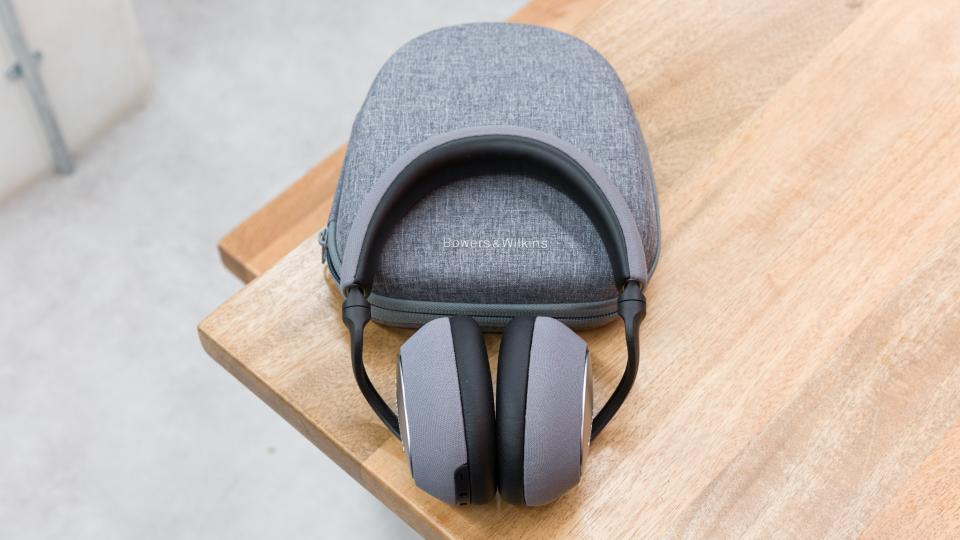 In the end, though, it won’t be small differences in sound quality or the subtleties of one Bluetooth codec versus another that will make the difference for most people, it’s the price. The good news is that the PX7, although new, are already showing signs of being cut in price.

Although the price may yoyo between list (£350) and on-sale (around £270) it’s clear that the PX7 aren’t the pricey proposition they once were and that makes them genuine contenders for the crown of best over-ear noise-cancelling headphones. If you can find them at the cheaper price, there’s absolutely no need to look anywhere else.