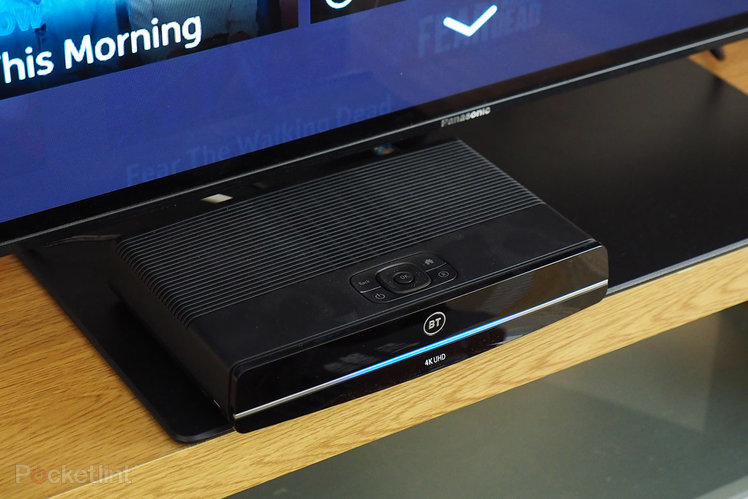 With such an abundance of streaming content available in today’s world, you may wonder why you would want a TV subscription service such as BT TV to tie you into a pay-for package.

Well, we can give you umpteen reasons: a box to record all your favourites in their native quality (up to 4K); the ability to pause and rewind what you’re watching (yay for advert skipping); access to heaps of sports content that you can only get on BT (or Sky; and only if you pay for such packages); and an electronic programme guide (EPG) that pulls all your content together for ease of use (thanks YouView).

The big question: is it all worth it? Here’s our breakdown of BT TV’s pros and cons and why, once you’re invested in it, you most probably won’t want to ever leave.

Unlike Sky, which requires a dish on the side of your house in the UK – yes, there was talk of cable-only delivery, but that’s since been scuppered in this country – BT TV doesn’t need anything of the same degree. 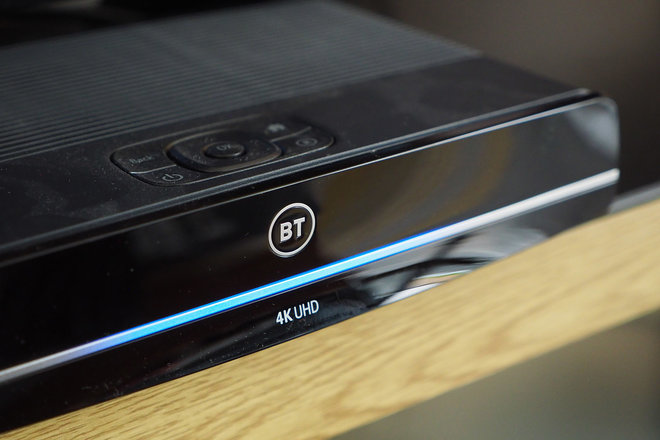 Indeed, you could run BT TV with just the provided box – a neat-looking little black one that arrives pronto in the post as part of your £39.99 setup fees (£10 of which is postage, apparently). Sky, on the other hand, will do its setup for £20, so BT is missing a trick here – cut the activation fees and appeal yet more.

With BT the absolute essential is a good broadband connection. It can’t be less than a 5Mbps sustained download speed, otherwise quality can’t be assured for HD content. For 4K/UHD content that needs to be 30Mbps. If you’re running multiple other devices also tapping into the web then you’ll likely want something even faster.

We’re wired up to BT’s Fibre 2 package, at £39.99 per month, which delivers around 70Mbps down consistently. It’s better than any Virgin Media connection we’ve ever had to suffer. We also live in a BT Gigabit home broadband area, so we could have speeds of up to 900Mbps – which is insanely fast – but that would cost £74.99 per month just for the connection alone, no TV services included. Maybe when 8K gaming becomes the standard, eh?

The broadband is required for a lot of the services and channels that are available, but not all of them: if you’ve got an aerial installed then the box will tap into Freeview and, depending on your signal strength and quality, that will provide additional non-broadband-delivered channels (a small point, but if your internet goes down then these will be the only channels you can access, of course). 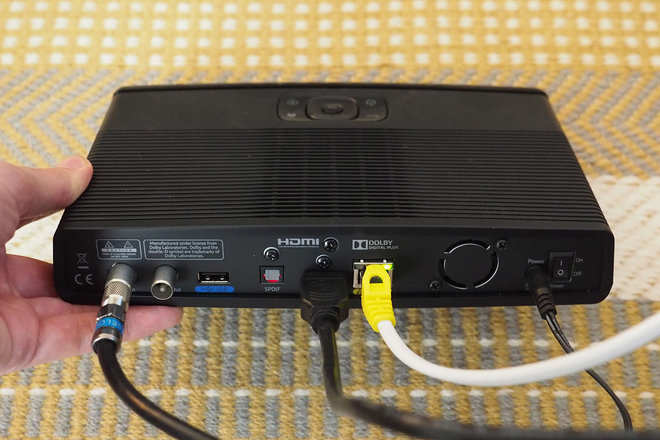 We used BT’s aerial install service, a one-off priced at £59.99, to get an internal aerial fitted into our new build property. It’s fitted inside the loft – the property agreement doesn’t permit external aerials, which also rules out a Sky dish (without permission from the estate anyway, so check your area/contract/landlord/laws/rules/whatever) – and, while the signal isn’t amazing (we could improve that with a booster, as advised), it gets us the basics of what we want, including all the UK big five channels in HD quality.

But you’re really not investing in BT TV to get hold of the UK’s main channels – as you can do that in so many other ways. Yes, it’s nice that they’re contained within an easy-to-use electronic programme guide, but you’ll probably be spending most of your time scrolling down towards the real meat on the bones: sports and entertainment.

If you’re into sports in a big way then there’s only really two ways to get it in the UK: Sky or BT. Or maybe go down the pub, but we know how that’s been going in 2020, eh?

Whichever provider you may go for, you can buy into the opposition’s key package. So there’s no reason to lose out: with BT TV you can have all the Sky Sports channels, meaning – with BT Sport also on board – that you get full Premier League access, plus F1, golf majors and plenty more besides (such as Moto GP, which you’d usually subscribe to separately).

BT does this by compiling Sky’s Now TV Sports packages. However, this means you can’t get Sky channels in 4K – that’s a Sky only benefit – but then Sky won’t get BT’s 4K channels either. So it’s six of one, half a dozen of the other on that account.

If you opt for Big Sport, at £40pm, then you won’t get the Sky’s content in HD either – you’ll need to opt for BT VIP, at £65pm, for that ‘Boost’. Indeed, even BT Sport channels won’t be HD/4K unless you opt for VIP, based on what the company’s website says. So be sure to check what you’re adding and what quality you expect it to be. 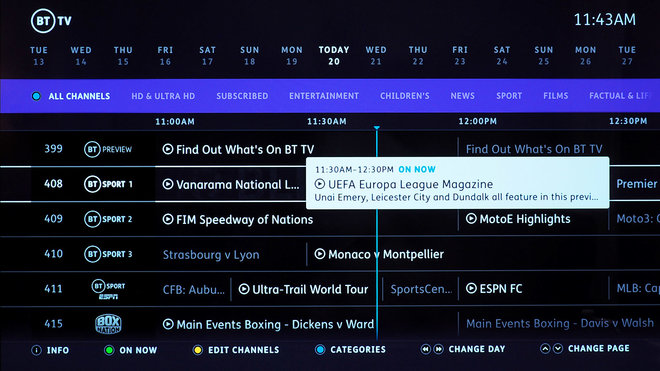 Beyond sports there’s a heap of entertainment on offer too. The VIP package, which is BT’s priciest, may seem like a lot, but then it delivers a lot – including Sky Atlantic and Sky One premium channels. There’s Sky Cinema, too, to plug into up-to-date movies.

Perhaps best of all is that you can pick through the electronic programme guide and record whatever you want live, or in the future, in its native quality. So if you’ve got 4K or HD footie, you can record it as so. No channel is off limits, so if you want to record a Sky Cinema title in HD then go for it – it’ll just use up space on your box’s 500GB (a little on the small side; Sky Q is twice that at its most basic, at 1TB).

However, the number of streams you can record at once is, of course, limited. You can record up to two shows at once whilst watching live TV, if you try and ask more of the box then it’ll request you stop one of your recordings. Again, Sky has the upper hand here: it matches the same with its base Q box, but the 2TB Sky Q box can record up to six channels whilst you watch a seventh. Whether anyone would ever need that is up for question, but family homes can become busy places, we suppose. 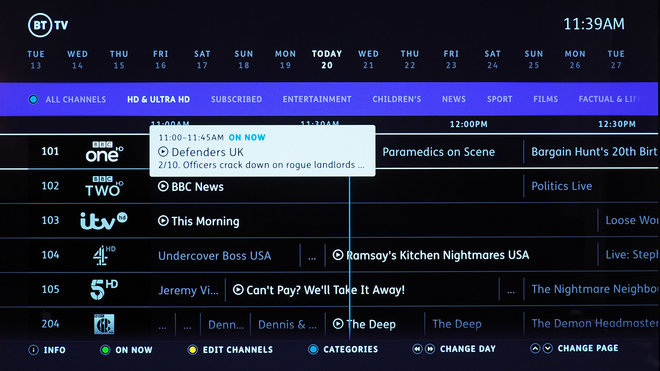 That 500GB is, realistically, 125 hours of HD recording. Anything in 4K uses up four times the equivalent space of HD. That’s a lot of time, though, so long as you don’t intend on series recording 15 shows in your first week that you’ll never get around to watching.

Oh, and the box is Ethernet only, i.e. wired. So if you don’t have a multimedia panel to link your TV to your hub/router at a decent speed then you’ll either need to trail cables around the house or get a decent powerline adapter – but the latter solution will almost certainly mean a dip in speed as a result. We’d like the box to include Wi-Fi as an option too.

The layout of all this content is well handled too. YouView, the underlying system of the BT TV box – although it’s not printed front and centre like it once was – is a decent collator. It’s easy to skip forward and set reminders and recordings, as we said. But you can also skip backwards, by up to a week, and select programmes to jump into that you missed – the system just fires up the relevant app (some of which, such as All 4, lack HD quality still – which is a shame – so we’d advise recording for that added quality). 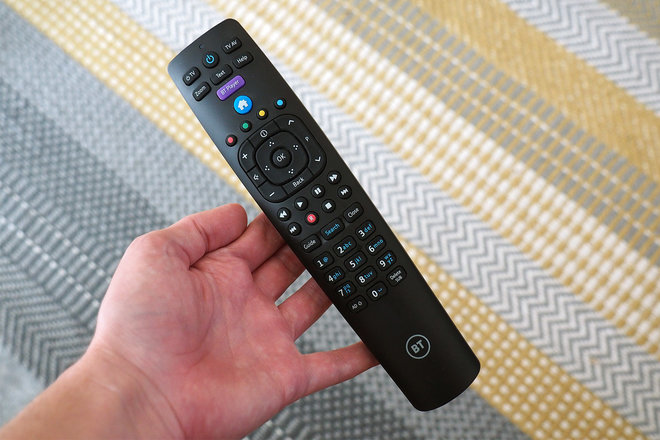 While we originally though that YouView’s layout wasn’t customisable – the SD and HD double-ups of channels eat into a lot of space – a quick tap of the yellow button on the controller allows you to hide channels that you’ll never want to see. Whether that’s discontinued ones – such as all the Disney channels – or just content that you know you’ll never care for. It’s easy to adjust the list at any future point too.

In terms of collating content, BT already does also do some of the heavy lifting for you. There’s a Home button – the big blue one with a house on it on the remote – that brings up tabs for Guide, Apps, MyTV, BT Player, TV Shows, and Films. The first two are self explanatory, the final two are automatically curated last-chance and popular watches from various sources, like a best-of reel.

It’s MyTV that has the most use: this is where you can easily find your recordings, just watched shows and scheduled recordings. Everything is arranged in big cards, so it’s easy to see on a visual basis what’s what. Even expired content remains, but that can serve as a reminder to seek it from elsewhere, should you wish. 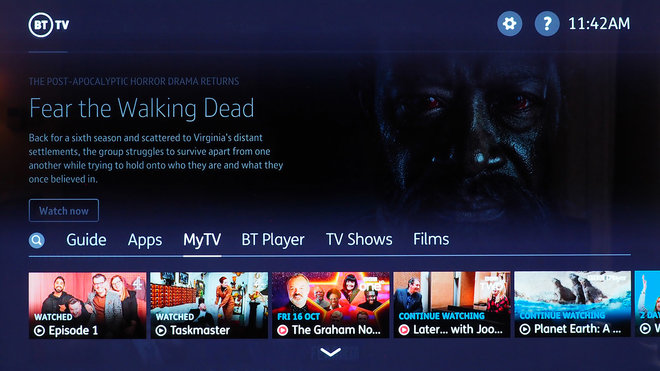 There’s also a parental PIN control to lock channels as you choose – whether PG, 12, 15, 18 rated – to hide them from younger eyes and ears. However, it’s not possible to entirely remove this PIN at all times of day, as Ofcom rules that any rated content pre-watershed (9pm) requires a PIN. As much as we’d like to not frequently tap in the extra digits, it’s just in line with regulation.

The Apps tab is one you’re likely to use a fair bit too: as it opens to door to the all-important Netflix and Amazon Prime Video (among others). We used to run these through various other sources – an Amazon Fire TV Stick or PlayStation 4 – but having them available in the one place makes it easy to fire up. 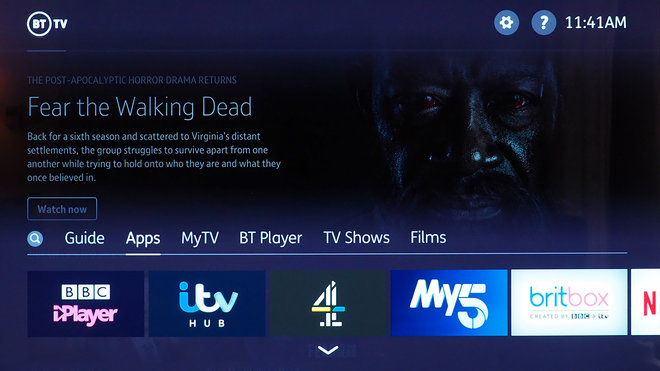 That we come to Netflix so often, however, does highlight one thing: that the £7.99pm service, which can be cancelled whenever you please, is – aside from sports – the biggest lure of all, really. That can, ultimately, make the additions of Sky Cinema and some entertainment channels seem expensive – but you kind of need them on the package to ensure everything is available in glorious HD.

Speaking of HD, Netflix and Amazon Prime Video offer an increasing amount of content in 4K and HDR (high dynamic range), some even with Dolby Atmos sound (the BT TV box is capable of passing Atmos). We’d really like to see more 4K channels in BT’s overall offering too, especially given the asking price. If Netflix can do it, why not the two-year subscription provider too?

As a side note, there’s no Apple TV+ or Disney+ access just yet, from what we can see. This could come in the future, pending a deal with the providers. Or just load up a separate device to launch such content providers.

In addition to all that you get in the BT TV subscription, there’s also stuff that you don’t. PVOD (premium video on demand) is something that’ll only grow in the future, no doubt, as cinemas begin to struggle and close and production houses and publishers look for other ways to get content out there. BT Player highlights various content that’s not included, from its Film Store and TV Store, and it’s up to you if you want to pay, ultimately. 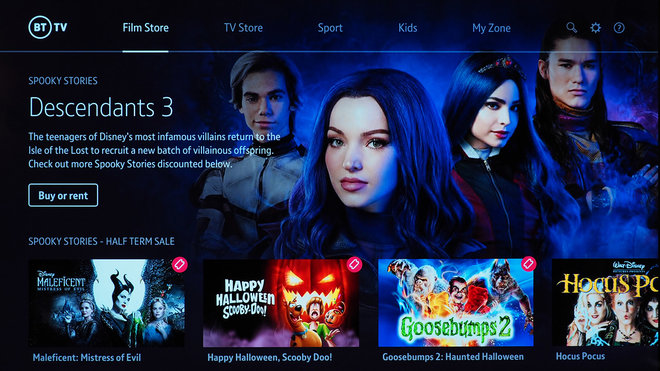 We do find it an oddity that, on occasion, however, some apparently PVOD content will be on Sky Cinema, but you’re then asked to pay for it to watch on-demand elsewhere. Again, recording is your friend here. We missed Spider Man: Into The Spider Verse and will wait until it reappears rather than paying the one-off £13.99 asking price in Film Store.