Buying a new Wi-FI router doesn’t have to mean going through a tedious setup process on all your current Wi-Fi devices. Here’s what you need to know about reusing your Wi-Fi name and password.

Back when Wi-Fi was introduced, most people had a mere handful of wireless items. A laptop here or there with a PCMCIA Wi-Fi card, maybe an early model smartphone with Wi-Fi support, and possibly a wireless bridge for your game console if you were a more advanced user. But overall, it would only take a few minutes to update the password in your few Wi-Fi devices.

Things are a bit different in many households now. Between all the smartphones, tablets, computers, game consoles, smart TVs, and a plethora of smart home devices ranging from smart thermostats to smart plugs and everything in between, it’s quite a chore to change credentials on all of them.

It’s not unusual for homes to have dozens of wireless devices or even hundreds in the case of people heavily invested in smart home tech. I’m in the latter group, and resetting my Wi-Fi network name and password requires a full afternoon of fiddling with devices.

So it just makes sense to reuse your old Wi-Fi network name and password when setting up a new router. It’s a useful trick and one that we have long recommended.

All you need to do is follow the setup instructions for your new router, plug in the same Wi-Fi network name in the SSID slot, and set the password to the same one you previously used with all your devices.

Do keep reading before you commit to this easy-peasy upgrade path, however, because there are some very good reasons to change your network name and password—like that encryption protocol issue we just mentioned.

When Should You Not Reuse Your Wi-Fi Credentials?

Recycling the same network name and password is, no doubt about it, the easy way to minimize router upgrade headaches. Before you do so, though, consider the following situations. Even though changing the login credentials on all your devices is a hassle, sometimes it’s necessary.

If you live in the middle of nowhere and suffer from zero Wi-Fi interference from neighbors, whether or not your Wi-Fi network name is a common one isn’t a particularly big deal.

But if you live in a densely packed apartment building, having the same SSID as one or more of your neighbors is a headache. So if your old SSID was something extremely common like “linksys,” “attwifi,” “wireless,” or any of the other common examples on this list of SSID stats, you should pick a new one.

Recycling the same network name isn’t a big deal, but recycling a short and weak password is a problem. Weak passwords are always a security risk, and if your password is under 12 characters, a common password like qwerty1234, or easily guessed because it contains personally identifiable information, you should change it.

Wi-Fi passwords can be up to 63 characters long, so now is a perfect time to replace qwerty1234 with a long and strong password.

Even better, if you want something easy to remember, you can use a passphrase. It might seem counterintuitive, but an easy-to-remember passphrase like Tomatoes Are Actually A Fruit! is actually harder to crack than a password like T0MaTo3s! .

You Were Using Outdated Encryption

If your new router supports better encryption protocols than your old router, now is the time to suck it up and change your network settings.

Although WPA2 encryption is better than WPA (and both are certainly better than the ancient WEP encryption protocol), WPA3 is increasingly common on newer routers, and you should use it. 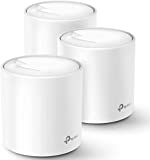 This mesh three-pack supports Wi-Fi 6, WPA3, and will cover a large home with wall-to-wall Wi-Fi.

While some devices will handle a jump between encryption standards as long as the SSID and password stay the same, many won’t. To minimize hassles and phantom issues with your network, it’s a good idea to change your SSID, at minimum, and update your password when you switch to WPA3 in order to force all your devices to start fresh with the new network credentials and

You Didn’t Have a Guest Network Before

If you didn’t previously use a guest network for people visiting your home who needed Wi-Fi access but instead gave them direct access to the main Wi-Fi network, you may want to consider using this as an opportunity to update your Wi-Fi security practices.

When configuring your guest network, be sure to use general best Wi-Fi practices: use a long and strong password, enable strong encryption, and so on.

If the above issues don’t apply to your situation, by all means, reuse your network name and password to save the hassle of configuring all your devices. If they do, though, seriously consider suffering through the hassle of updating everything with a strong password and better encryption.