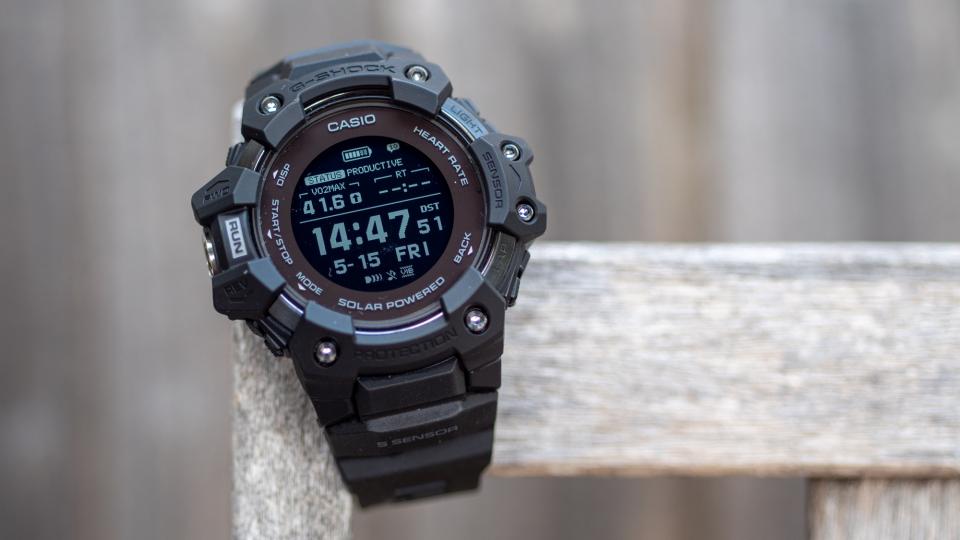 Ask anyone who grew up in the 1980s to name the watch brands they most associate with their youth and I’d wager the majority would blurt out Casio before even thinking. The Japanese calculator maker was rightly famous for its digital timepieces at the time and especially its rugged G-Shock watches.

Now, nearly 40 years since the advent of the first G-Shock watch, Casio is stepping up into serious sports tracking territory. The G-Shock G-Squad GBD-H1000 is a watch that combines G-Shock’s renowned toughness with all the features you’d expect of a full-fat sports tracking wearable but at the more than reasonable price of £379.

What do you get for the money?

G-Shock fans will be pleased to find that little of the original G-Shock ethos has been sacrificed with the inclusion of the full fitness tracking. It’s a big, chunky, aggressively designed timepiece that both looks and feels like it would survive an encounter with an angry bear.

It’s waterproof to 200 metres, so you could theoretically wear it on a scuba dive as well as a swim at your local swimming pool. Its rugged, shock-resistant casing is designed to protect the glass screen and the electronics inside from most kinds of hard impact.

As a result, it’s a pretty hefty thing. It stands 20mm proud of your wrist and it’s heavy, too, at 101g. However, even on my less-than-manly wrists it felt comfortable to wear and I’m a massive fan of the way it looks with its big resin crenellations – grasping the display within like some futuristic robot – and large, easy-to-press buttons. In case you were wondering, this watch does not have a touchscreen and that, to my mind, is not a problem.

A big part of what makes the GBD-H1000 such a pleasurable watch to wear, though, is its clear, crisp white-on-black memory-in-pixel (MIP) display – the same technology Garmin uses on its high-end Fenix range of fitness watches. This is a monochrome display but it’s as easy to read in full sun as it is inside. For reading in the dark, the watch has a side light that can be enabled with a button press or by simply lifting your wrist.

As far as sensors are concerned, the watch comes with everything a modern fitness watch needs. There’s GPS, GLONASS and QZSS compatibility for location tracking away from your phone; an optical heart rate sensor on the rear for measuring your pulse; plus accelerometers; a barometric altimeter and a digital compass, too. 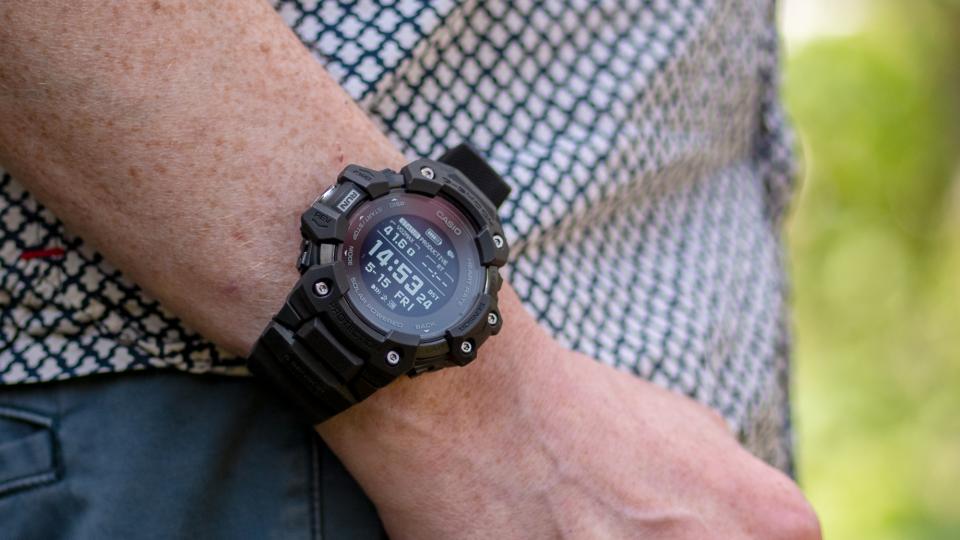 The watch is rechargeable via a proprietary USB cable that clips securely to the rear plate and charges from empty to full in around two and a half hours. It also has solar charging, which is used to top up the battery and lengthen its already impressive battery life (more on that below) and it can run on solar power alone as long as you don’t use continuous heart rate monitoring or GPS. Handy if you’ve gone on holiday and happen to have left the USB cable at home.

What activity and sport can it track?

As with most fitness wearables, the Casio G-Shock GPD-H1000 uses its accelerometer to track your step count on a daily basis and the GPS and heart-rate sensor to track your workouts. Starting a workout is simple: all you do is press the big “Run” button on the left side of the case, wait for the watch to get a GPS lock and press it again to start tracking.

There are no sport modes to speak of, which is a surprise in a watch with sports tracking pretensions. However, it is possible to alter various settings manually to suit the activity you happen to be doing. You can turn off the GPS for indoor training sessions, for instance, or adjust the frequency with which the GPS radio checks your position; this can save battery life on hikes or longer runs. 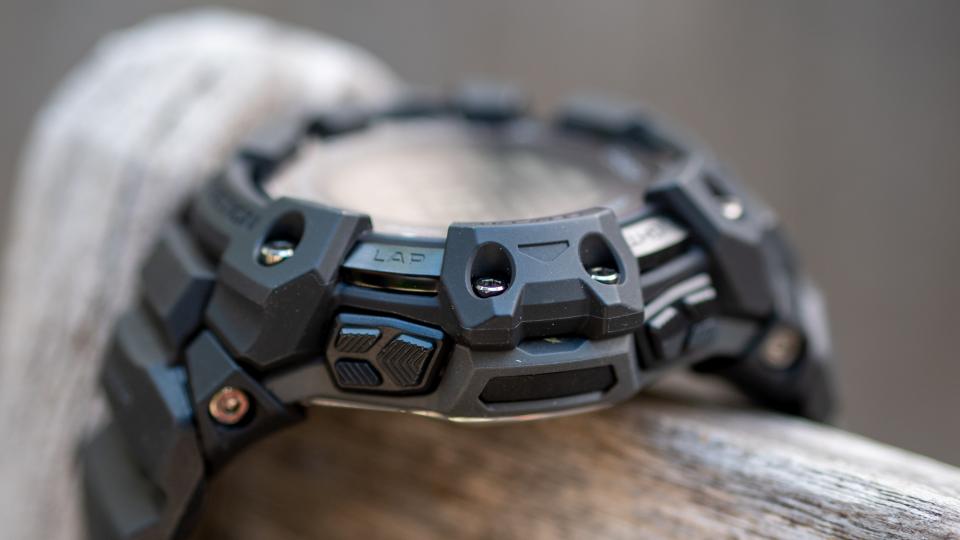 The watch’s training facilities are at best a mixed bag. While the app lets you create a training plan (based on improving your overall fitness or building to a specific distance or race), the only part of the workouts that are sent to the watch itself are the target heart rate for each session; you have to memorise any intervals, target distances or times.

While that’s annoying and, frankly, a bit weird, there are some unequivocally good things about the GBD-H1000’s fitness tracking abilities. The main one is that the GBD-H1000 can use advanced metrics to track your improvement, estimating your VO2 max, the aerobic and anaerobic training effect of each workout and your training load over time so you don’t overdo it and risk injury. Interestingly, Casio uses the same Firstbeat algorithms as Garmin does, so the numbers should be pretty sensible. 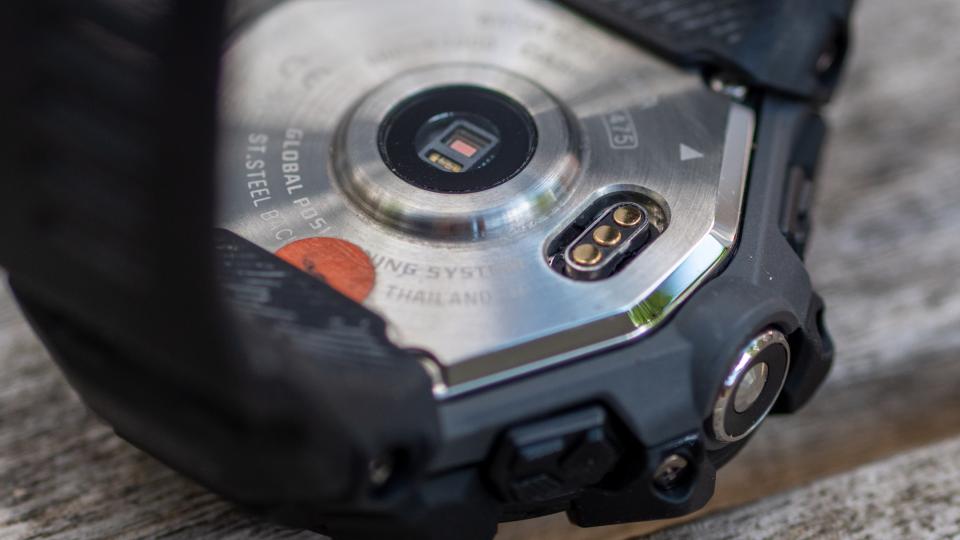 The final piece in the puzzle is the ability to sync this data with third party services, which currently is not possible. That will change soon: Casio is promising to add Strava and Google Fit connectivity in a few weeks – but it needs to be offering more than this.

How accurate is it?

The answer to this question is that it depends on the activity you want to track. In general, however, I’ve found it to be quite patchy.

I’ll start with heart rate tracking, which is the GBD-H1000’s biggest problem. During low-intensity workouts such as a brisk hike I’ve frequently seen my heart rate jump up to extraordinarily high levels, much higher than my MyZone MZ-3 chest belt was reporting at the time.

This happened less frequently during more intense workouts where average, maximum and minimum heart rate readings typically tracked in line with what I saw from my chest belt. However, it only takes one dodgy session to skew your overall VO2 max and training load numbers and, during one treadmill run, the GBD-H1000 reported my heart rate at over 200bpm for 12mins 18secs. This knocked everything out of kilter for a couple of weeks, notwithstanding the fact that if that had been my heart rate (it wasn’t) I’d probably be dead right now. And no you can’t pair third party sensors, so there’s no way of improving this. 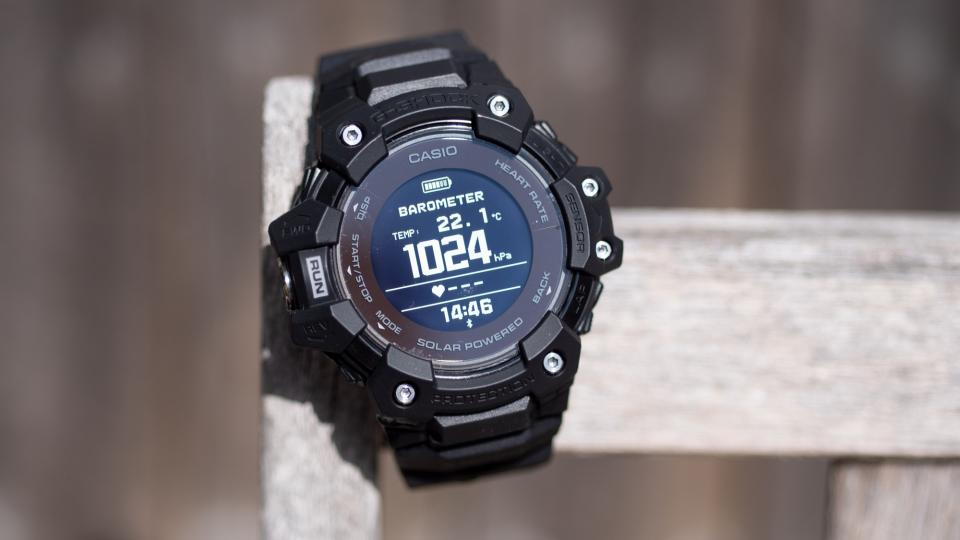 The watch’s GPS accuracy was better but, again, I found it to be inconsistent. The first problem is that it takes an age to lock onto a signal – anything up to two minutes in my experience, which is okay when it’s warm but a problem in the cold of winter and that’s despite supporting both GPS and GLONASS satellite networks. When you get a lock, its total distances seem okay but, again, it depends on your activity. On slower walks I found it tended to over-read but on runs and bike rides it wasn’t far off accurate.

The question is, would I want to rely on the Casio G-Shock MBD-H1000 to provide both accurate heart rate and GPS tracking for training purposes? Although it’s by no means disastrously bad, the answer to that question would have to be no. 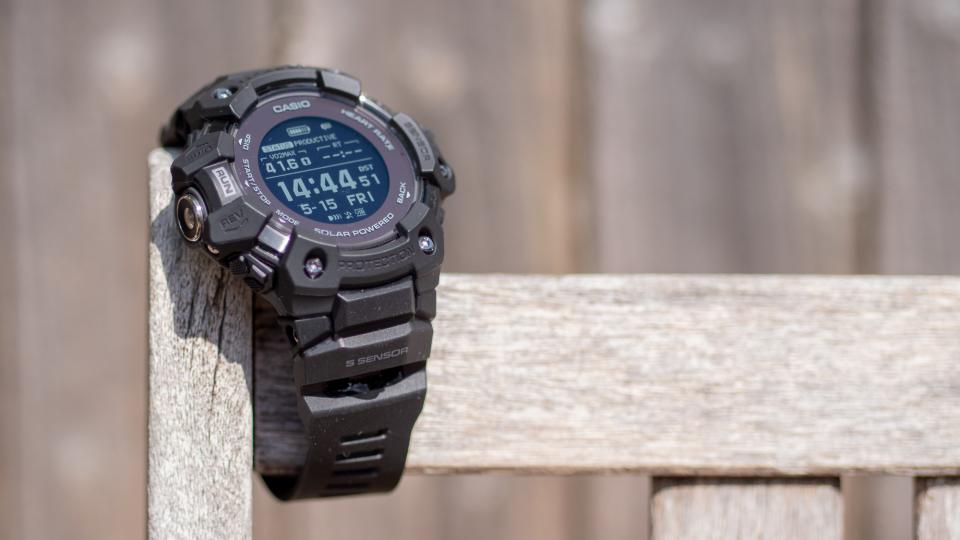 Fortunately, this is one part of the GBD-H1000’s performance that’s pretty good. With continuous heart rate enabled, I found the watch will last around a week before needing to be recharged – that’s with a half-hour GPS workout tracked every other day.

Disable that feature, however, and you’ll more than double your battery life. Right now, despite having tracked GPS workouts at around one every other day, it’s still showing as having more than 50% battery life remaining after over two weeks of use. That’s tracking for an overall battery life of a month including more than six hours of GPS tracking: a phenomenal performance that only the premium Garmin Fenix watches can compete with.

Should I buy it?

The Casio G-Shock GBD-H1000 is a bit of a mixed bag, then. On the one hand it’s a great watch to wear. It has fantastic battery life and a lovely screen. If you’re into the G-Shock styling (which I most certainly am) you’ll love the way it looks and it’s tougher than most smart or fitness watches. At £379, it’s not horrendously overpriced, either.

Despite the presence of some advanced metrics, however, this is not a watch for fitness fans interested in delving into their running form and stats. The heart rate monitor is far from consistent and the GPS, although better, still doesn’t inspire confidence.

If that’s what you’re mainly interested in, buy a Garmin Forerunner or a Garmin Fenix or possibly one of Polar or Suunto’s high-end fitness watches instead. This one is, sadly, mainly for show. 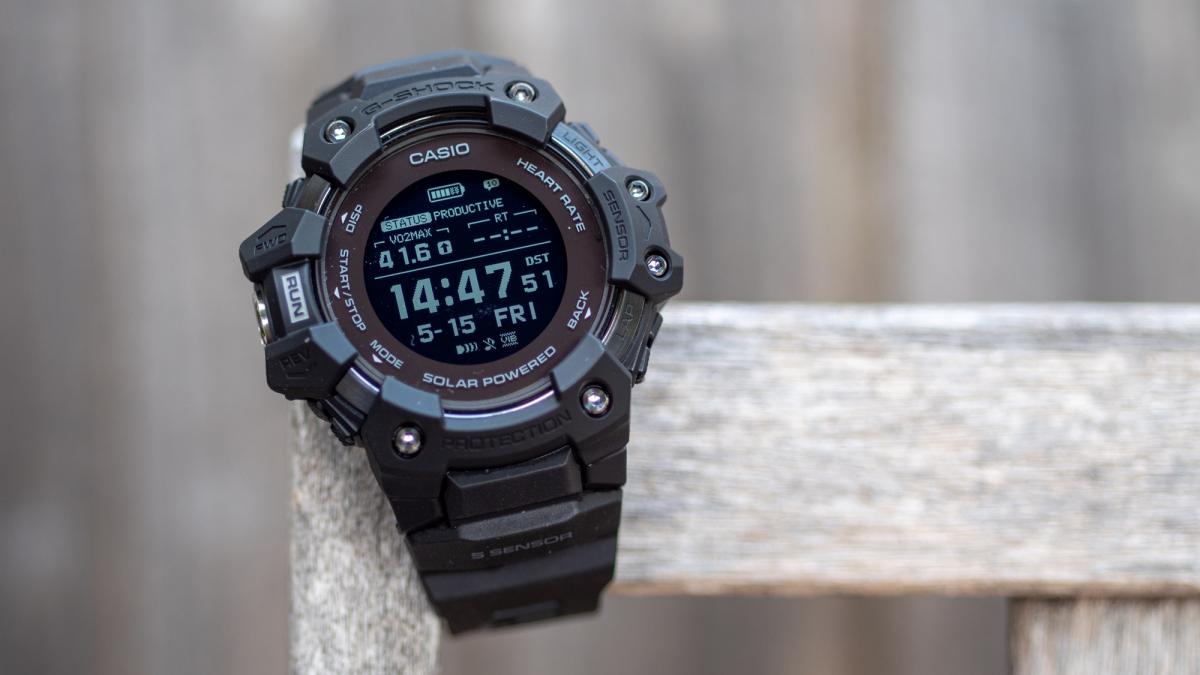