You are here: Home / CDPR’s PS4 Pro & Xbox One X Support Shames Major Publishers Raking In A Lot More Money from Their Games

CD Projekt RED, or CDPR as it’s affectionately called by fans, has been often hailed as an exemplary developer when it comes to post-launch support of their games.

Dating back all the way to the first two The Witcher games, the company released Enhanced Editions that delivered substantial and free updates to owners of the base games. With The Witcher III, they went above and beyond giving 16 free DLCs to the community before publishing two massive and widely acclaimed paid expansions, Hearts of Stone and Blood and Wine.

In the past couple months, CDPR made PlayStation 4 Pro and Xbox One X fans even happier by providing enhancements patches that would exploit the power of the new consoles.

On PS4 Pro, The Witcher III now runs at 4K resolution via checkerboard rendering with improved Anisotropic Filtering and Ambient Occlusion. However, it’s the more recent Xbox One X patch which is truly remarkable, possibly delivering the best visuals yet for the game when factoring in the HDR support, a first for The Witcher III (coming in January for PS4 Pro, while there are no current plans to add it for PC).

4K mode delivers a stable, essentially stutter-free 30FPS experience even in the most taxing areas. Not only The Witcher III on Xbox One X looks sharper than it ever did on consoles, it also provides higher quality shadows and higher resolution textures on top of the improvements already seen on PS4 Pro.

You can take a look at the amazing gameplay we captured in 4K HDR below, straight from the Xbox One X console. Watch it preferably with an HDR display to get the best result. 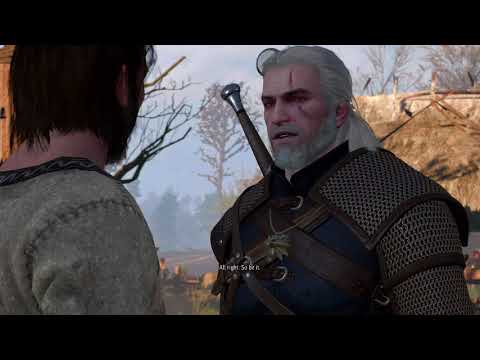 Not content with just delivering a 4K mode, CDPR also added a performance mode that unlocks the frame rate up to 60FPS on Xbox One X while lowering the resolution dynamically as needed. 4K mode is actually more stable if you dislike frame rate variation, but it’s nonetheless great to have a performance option.

It is mindboggling to consider how CDPR could do this for the community even though their game isn’t really being updated anymore while major multiplayer titles are still missing their upgrades.

Rockstar’s GTA Online, EA’s Battlefield 1 and Ubisoft’s Rainbow Six Siege are our prime suspects. These games are still raking in millions upon millions in revenue between DLC, Season Passes and/or microtransactions, despite having launched years ago. What’s more frustrating is knowing that smaller developers have often talked about how easy it was to get their games running on PlayStation 4 Pro and Xbox One X, with the latter console receiving the most praise for its software development kit (SDK). For these massive studios, it should be basically child’s play.

Let’s begin with EA’s Battlefield 1, which is the minor offender in this list. That’s because it actually launched with support for Sony’s PlayStation 4 Pro last year. The World War 1 themed multiplayer first-person shooter runs at dynamic 1800P resolution with checkerboard rendering on PlayStation 4 Pro, thus delivering a vast improvement over the dynamic 1080P resolution available on the base PlayStation 4 console. The developers even added High Dynamic Range (HDR) support earlier this year on PC, PlayStation 4 and Xbox One S.

However, it’s been almost two months since the launch of Microsoft’s Xbox One X console and Battlefield 1 developers have been completely silent on whether the game will ever be properly enhanced for the new machine. That’s really disappointing for Xbox One X fans, especially those who have recently purchased the Battlefield 1 Revolution (currently priced at $24 on Microsoft’s Store for Xbox One) which consists of the base game and the four expansions included in the Premium Pass. It’s doubly a shame since DICE have already supported Xbox One X with this year’s Star Wars Battlefront II game, which means there’s certainly no lack of expertise and knowledge of the hardware to be called into question.

Ubisoft’s Rainbow Six Siege is another major multiplayer first-person shooter whose support for the enhanced consoles released by Microsoft and Sony is completely AWOL.

While the latest installment in the tactical FPS franchise didn’t make a big splash when it first debuted two years ago, Rainbow Six Siege eventually became Ubisoft’s banner title for their Game as a Service model. With continuous improvements and regular content additions, the player base grew steadily while the eSports side thrived.

Only three weeks ago we reported that over 25 million players have played the game across all platforms. Ubisoft is already selling the Year 3 Pass and yet there’s no news of any patches coming to PlayStation 4 Pro and/or Xbox One X. These players are once again left in the dark despite their clear interest in playing the game well beyond 2018.

At the top of our list, there’s none other than Rockstar’s GTA Online though. It’s quite easy to explain why. In the latest financial report (FY Q2 2018), Take-Two CEO Strauss Zelnick proudly announced:

This is just the latest achievement in a seemingly endless streak. Grand Theft Auto V is now the best-selling game of all time in the U.S. when combining physical and digital sales, in both units and revenue, according to the NPD Group. Meanwhile, GTA Online continues to deliver updates with the objective to keep players engaged for a long time yet, despite the game originally launching over four years ago.

Rockstar (and Take-Two) have literally made billions from this game and yet they cannot seem to be bothered to update the game to make use of the latest console hardware revisions and provide the best experience to fans.

Hopefully, that will change soon for all of the games mentioned in this article because there literally is no excuse for these developers and publishers to keep avoiding the topic. CDPR’s example should be followed as quickly as possible.