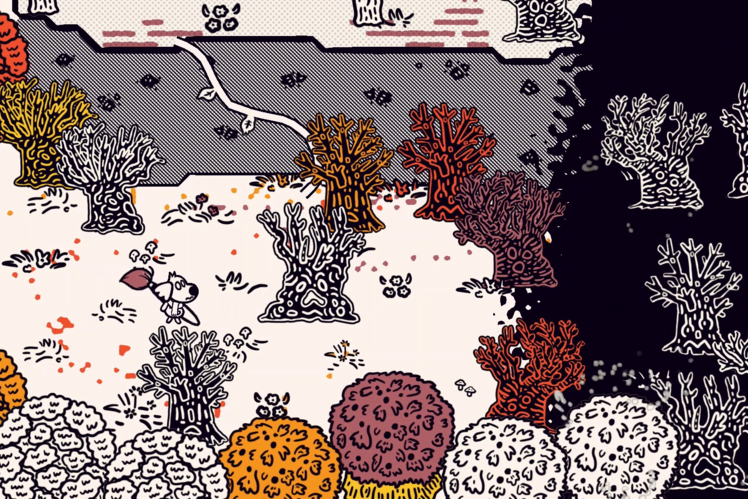 There are plenty of games that we associate tightly with the platforms they’re on, whether it’s Halo and Xbox or Uncharted and PlayStation, but it’s somewhat rarer for a game to be very clearly ideal for a specific platform for hardware reasons.

Chicory is such a game for the Nintendo Switch – it’s available on PS5 and PS4 as well, but as a game all about painting it couldn’t suit the touch-screen interface offered by the Switch any better. Handily, it’s also a lovely little story all about self-belief.

Set up to fail

Chicory is the name of a great hero in the world where the game is set – the Wielder of a magic paintbrush that lets her colour in everything around her, avoiding its default state of white blankness. You play as her faithful cleaner, but quickly find yourself with the brush as Chicory hits a major crisis.

There’s no hanging about, and it quickly becomes clear that you’re the only one willing or able to step up and save the land around you from a growing corruption of blackness and void, which you’ll have to do by learning new powers and discovering inner troves of self-believe.

The story Chicory tells is a heartening one, full and frank in its approach to wellbeing and self-worth, with characters all around the place opening up to you about how they’re feeling, why they’re anxious and how you might be able to help them get through it. 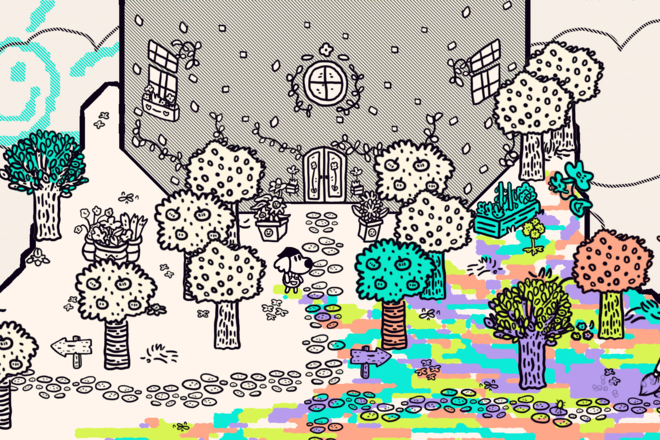 You’re almost in a utopia where everyone can talk about things without any stigma, if it weren’t for the ongoing collapse of said reality entirely. Still, it makes for a consistently heartwarming affair that often surprises you with tender moments from even fairly minor supporting characters.

By the time you close its credits out (rewarded by a delightful timelapse of the world colouring in over time), you’ll likely be feeling a nice warm and fuzzy sensation – and there’s much to be said for that.

Paint your way out

How do you actually play Chicory, though? Well, in many ways it’s very traditional – a take on adventure gaming that echoes back to the original Legend of Zelda closely. You move around from a top-down perspective, uncovering new tiles connected to the screen you’re on over time. 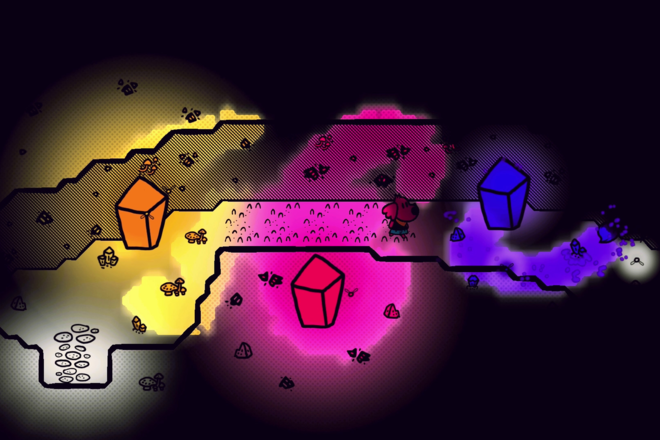 Some of these are easily accessed, but many will require circuitous routes thanks to blockages and barriers, and over the course of the game you’ll gain access to abilities and upgrades that let you get around the whole world more quickly and easily.

Where it starts to paint its own path, though, is in Chicory’s central gameplay twist – you’re a painter and, my goodness, you’ll do a lot of painting. At all times you can control a paintbrush floating around your cute character, picking from a roster of colours and painting the world around you.

On the Switch, you can use the right stick to do so, but far more satisfying is the touch-screen approach, letting you hand-craft your designs and painterly swoops. Various brush styles and powers will let you fill things in more quickly, but you can be certain that your game world will end up looking like no one else’s on the planet.

Painting certain environmental details will also activate them – from mushrooms that jump you up levels, to vines that transport you around – and you’ll quickly find yourself painting less for aesthetics reasons and more to get around.

However, Chicory cleverly drips in opportunities to draw and paint designs for the sake of art as well, whether it’s at the in-game painting school, or for various shop-owners in need of some jazzier marketing. Seeing the results of your efforts displayed gives a nice buzz.

The game also makes a point of looking into the way some of us might toil at crafts we don’t excel in yet – so when your first childish scrawlings are framed and praised by everyone, you really get a sense of the game’s mechanics and message coming together beautifully.

A world to fill in

Chicory’s world has a variety of locations to explore, all of them drawn with nice pixel art and distinct styles, although as you move around them it’ll be up to you to colour them in. To make areas feel distinct, the developers have cleverly come up with a system of palettes. 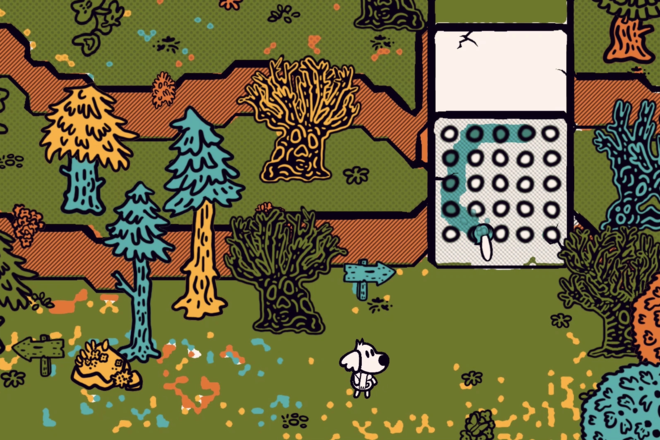 You’ll get access to different colour schemes as you move around, so you can’t just paint the whole world a single vivid colour (or you can’t until some late game changes and optional unlocks). This means you’ll get to know the areas according to how you’ve painted them in.

There are also a host of animal characters to meet, each of them written with some nice verve, and drawn so that their internal dynamic is pretty much writ large, and it makes for a really fun cartoonish feel as you get to know these cuties, most of them with surprisingly realistic mindsets.

In true adventure game style, there are also loads of optional collectibles to find, in the form of outfit options to really style it out, new brush styles for artistic expression, and currency in the form of picked-up litter that can help you buy decorations for your home and the world around you. 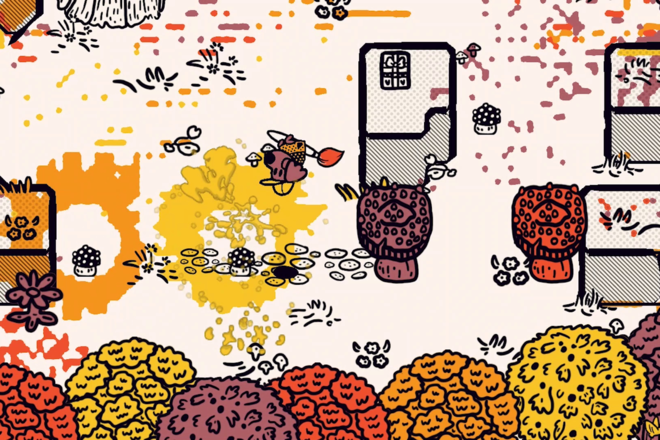 The Switch copes with it all admirably, too, and while we had a couple of crashes during our playthrough we never lost more than a couple of minutes of progress. We also want to shout out the impressive difficulty options that are included – you can skip boss fights, which is always nice, but we’re particularly in love with an in-game hint system (entirely optionally accessed) that means you’ll never be stuck if you’re getting frustrated, which is delivered with real panache.