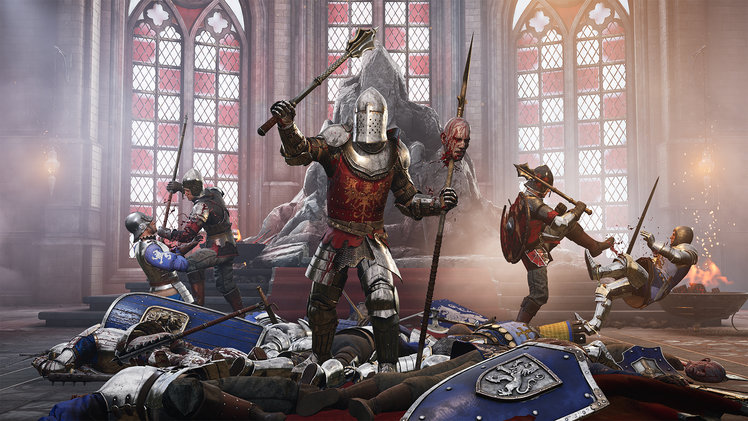 At first, things seemed fairly peaceful, then out of nowhere a knight in full armour came charging towards us screaming blue murder while simultaneously being bathed in fire. He swang angrily at us and we quickly blocked his attack, confident we’d be able to beat back a foe who was surely already sorely wounded from whatever hell he’d just come out of.

Another swing and we parried and returned a blow. Then another and another. Just when things felt like they were going well, we saw an enemy footman run by the periphery of our vision. A flash of movement later and we were hit from behind. We quickly spun on our heel to deal with the new threat only to find we were surrounded by four enemy soldiers all intent on dealing death. Then the inevitable happened. Someone swung a long sword and our head flew off.

This was clearly going to be a baptism of fire and a great taste of what was to come. Yes, we’d lost, but boy had we been impressed by the battle and the thrill of what Chivalry 2 has to offer.

If you haven’t gathered already, Chivalry 2 is a multiplayer slasher set in medieval times where you’re thrust into epic and bloody battles on a grand scales – with up to 64 players fighting for victory.

This game is interesting for many different reasons. The combat system, for instance, is designed to blend the best of both first-person shooters and fighting games to create something unique and engaging. The result is an utterly satisfying style of combat that not only sees you trying to master various attacks but also pulling off parries, ripostes, counters and more.

We found the tutorial teaches you the basics of what you need to know – including learning how to chain different types of attacks, deal with incoming swings, and handle an enemy who’s blocking you. One highlight is the use of the camera movement as part of your attacks.

Equipped with a long sword, you’re taught how to swing it to not just hit an enemy but also potentially multiple enemies with one strike. This is achieved by starting the attack and then turning as you do so. Left-click your mouse, then drag-to-turn and you’ll arc the sword across a greater distance, connecting it with an enemy faster but also hitting more of them in the process.

Learning how to combine blocks, stabs, slashes and overhead attacks can also let you break an enemy’s defences and win the battle. This fluid movement system makes fighting much more interesting than you’d expect – as it means you can also block other people who decide to join in or just feel like you’re winning even when you aren’t.

The fluidity of the battle is also one of the ways Chivalry provides endless entertainment. You can be fighting one on one with an enemy in relative peace and then suddenly find yourself horribly outnumbered by the unrelenting horde, or on the winning side as teammates charge in to help you.

Chivalry 2 has several different game modes to keep you entertained. This includes free-for-all battles, team deathmatch, and objective-based game modes. It’s the last of those that we find most entertaining as you’re presented with an objective to defend a certain area or carry out a specific task while also not losing your head or limbs. 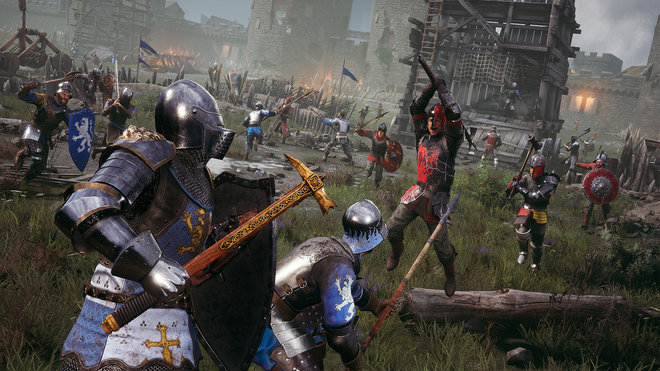 In one such game, we were tasked with defending some prisoners our team had captured. The enemy had to charge in and unlock the cages while we had to try to hold them at bay. We kicked off by selecting the knight class and charged into battle to see what we could do to keep them at away. At the edge of the camp, there was a set of stockades and nearby we found a huge axe that had been used to lop off prisoner’s heads. Beside that was a basket full of those severed heads. We grabbed one of those heads and promptly threw it at a nearby enemy then snapped up the axe and threw that too. Hammer in hand we then rushed in to mop up.

Of course, what started off well suddenly took a turn when multiple enemies started swinging at us. We dodged and backed off a bit to plant a banner. That banner is one of the character class perks you can acquire. This is a team-based tool that can support your team, in this case healing anyone nearby. With the banner laid we charged back in swinging. A large heavy swing seemed like it was well placed until a friendly teammate ran across in front of us and took the blow instead. 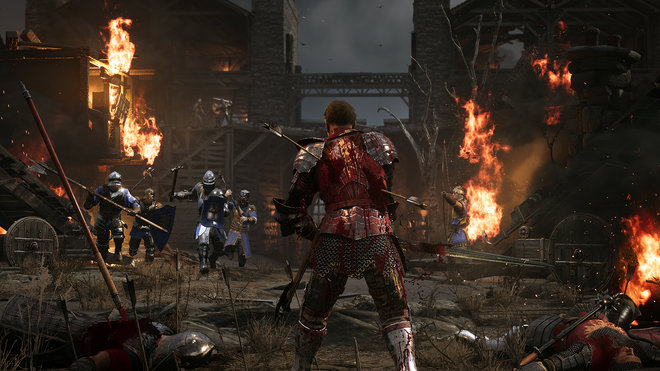 Team damage happens a lot in Chivalry 2. Weapons are cumbersome and slow to swing. You’ll regularly find yourself readying up what looks like a good swing against an enemy soldier then suddenly find there are three friendlies who have charged in for some action and end up taking the blow instead. Luckily this works both ways and enemies will also kill each other trying to get you when the action is really thick.

It’s possible to cancel your attack and even to change to a different attack mid-swing, but it takes some getting used to – and we often found ourselves swinging at the sky instead to avoid hitting a teammate who had wandered into the danger zone.

Chivalry 2 has several different classes to play with – Knight, Vanguard, Footman and Archer. Each class has advantages and disadvantages and different play-styles. Knights, for example, have more armour and wield two-handed weapons, while archers focus on long-range combat and have the smallest amount of health. 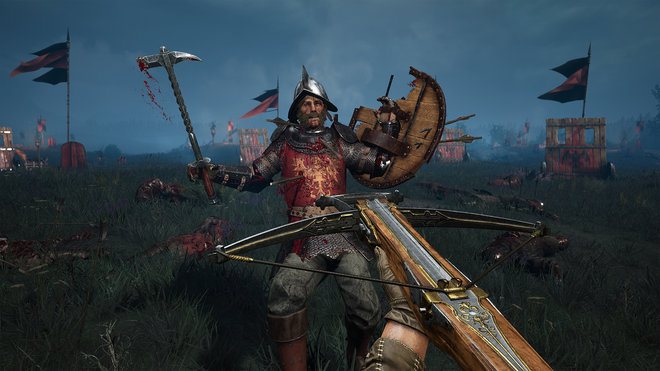 Play with a class and you’ll upgrade it for new weapons, armour and more. You’ll soon see some people with fancy-looking armour charging about the battlefield, but don’t worry – they’ll still go down as easily as any with a well-timed blow.

Each class has more to offer as well. One has an oil bomb you can chuck for devastating effect, another can deploy traps, and so forth. Learning which works for you is all part of the fun. And there’s so much fun to be had.

You’ll also quickly learn that it doesn’t pay to charge headlong into large groups of enemy soldiers. Equally, it doesn’t pay to attack in close quarters alongside loads of your own team. Death and team kills await there. 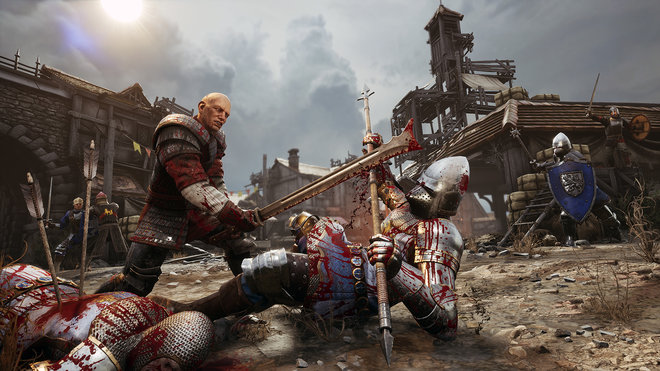 For objective-based modes, it also pays to not get blinded by a thirst for blood. Complete the objectives and help your team win, whether that’s smashing down gates, moving a trailer, or freeing prisoners. There are lots of things to keep you engaged while trying to stay alive.