While the AMD Zen 2 architecture brought Ryzen 9 processors to laptops for the first time, the market now offers a more ample selection of uncompromised and top-performance and gaming notebooks based on the newer Ryzen 9 platforms.

At the time of this update, the best Ryzen 9 laptops are based on the Zen3 Ryzen 5000 series of mobile processors, with the Ryzen 9 5900HX on the most powerful models, and the highly efficient Ryzen 9 5980HS and 5900HS processors available on a handful of portable formats. A Ryzen 9 5980HX has also been announced as the top Ryzen 5000 series mobile option, but that’s not yet available in any retail product.

This article will shed some light on the specs and performance of these Ryzen 9 platforms, as well as provide a detailed list of all the laptops built by this sort of hardware.

As a whole, there are mostly two kinds of AMD Ryzen 9 powered laptops out there: those based on the full-power H and HX processors (5900HX, 4900H), with a design TDP of 45+W, and the thinner-and-lighter form-factors based on the HS subseries of Ryzen 9 mobile APUs (5900HS, 4900HS), premium and efficient bins with a TDP of 35+W. Of course, all these can run at various power settings, and their performance varies between each product, as it’s highly dependent on the quality of each implementation, the thermal module, and overall design. That’s why we’ve linked our detailed reviews down below where available, with in-depth info on all our findings.

We’re not going to thoroughly discuss benchmarks results in this article, but we’ll touch on what you should generally expect from the latest Ryzen 9 processors in a bit, with more details on those previously mentioned reviews. And then we’ll jump into those detailed lists of the available Ryzen 9 5900HX/5900HS laptops, as well as those models launched in previous years and built on Ryzen 9 4900H/4900HS hardware, which are still available in stores, most likely with good discounts. 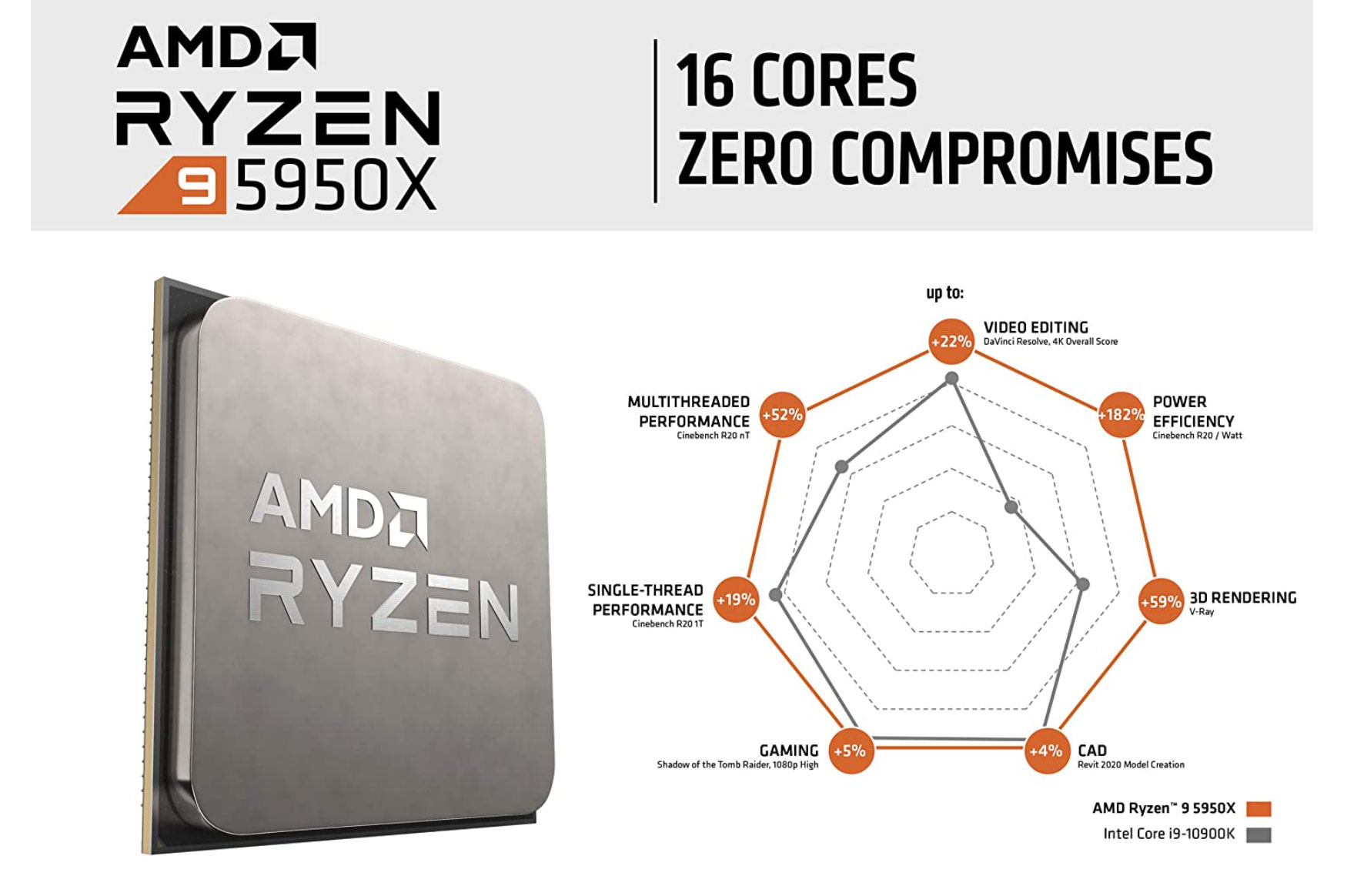 Ryzen 9 5950HX – the no-compromise AMD laptops of this generation

So first off, here’s a quick specs sheet of the Zen 3 and Zen 2 Ryzen 9 H and HS processors:

The H and HX models run at higher power and higher base clocks than the HS models, but they are otherwise very similar within the same generation. On the other hand, the difference between the 4000 and 5000 models might not seem like much on paper, but it actually is, thanks to the various IPC improvements and optimizations available with Zen3 cores, plus the extra amount of cache memory. The 5000-series APUs also get more capable Vega 8 integrated graphics, yet that won’t matter here, as all these Ryzen 9 notebooks come with dedicated graphics that take over in GPU-heavy loads.

For what is worth, Ryzen 7 mainstream alternatives are also available for each of these 9s, still 8C/16T processors, but running and marginally lower clocks. Given the Ryzen 9 configurations are generally expensive, I’d expect most of you to be interested in the mid-range Ryzen 7 models instead, which we’ll touch on in a separate article.

In all fairness, the Ryzen 9 platforms are also implemented into higher-tier performance and gaming products and generally available on the higher-specced configurations. Unlike with the Ryzen 4000 generation that wasn’t broadly adopted and was mostly available on lower-tier laptops with up to mid-range graphics (such as the 2020 Zephyrus G15 and G14, Dell G5 Gaming, HP Omen 15, Lenovo Legion 5), the Ryzen 5000 hardware is now available in top-end designs with up to RTX 3080 graphics (and AMD RDNA2 dGPUs at some future point), excellent screens, uncompromised builds, and the latest features available as of 2021. At the same time, mid-tier and more affordable Ryzen 9 5000 designs are still available, for those of you on more limited budgets.

Before we move on, here are some performance numbers you should expect for the Ryzen 9 5900HX and 5980HS mobile processors in comparison to the other options out there (these are AMD numbers): 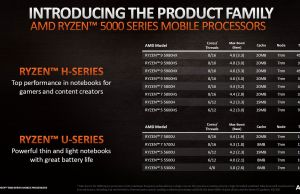 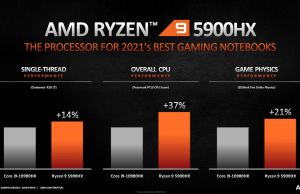 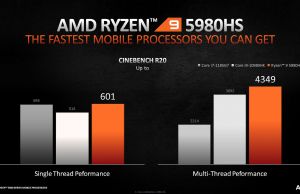 And here are some of our own findings on real products that you can find in stores. First, the Cinebench loop that tests the CPU’s sustained multi-thread performance. 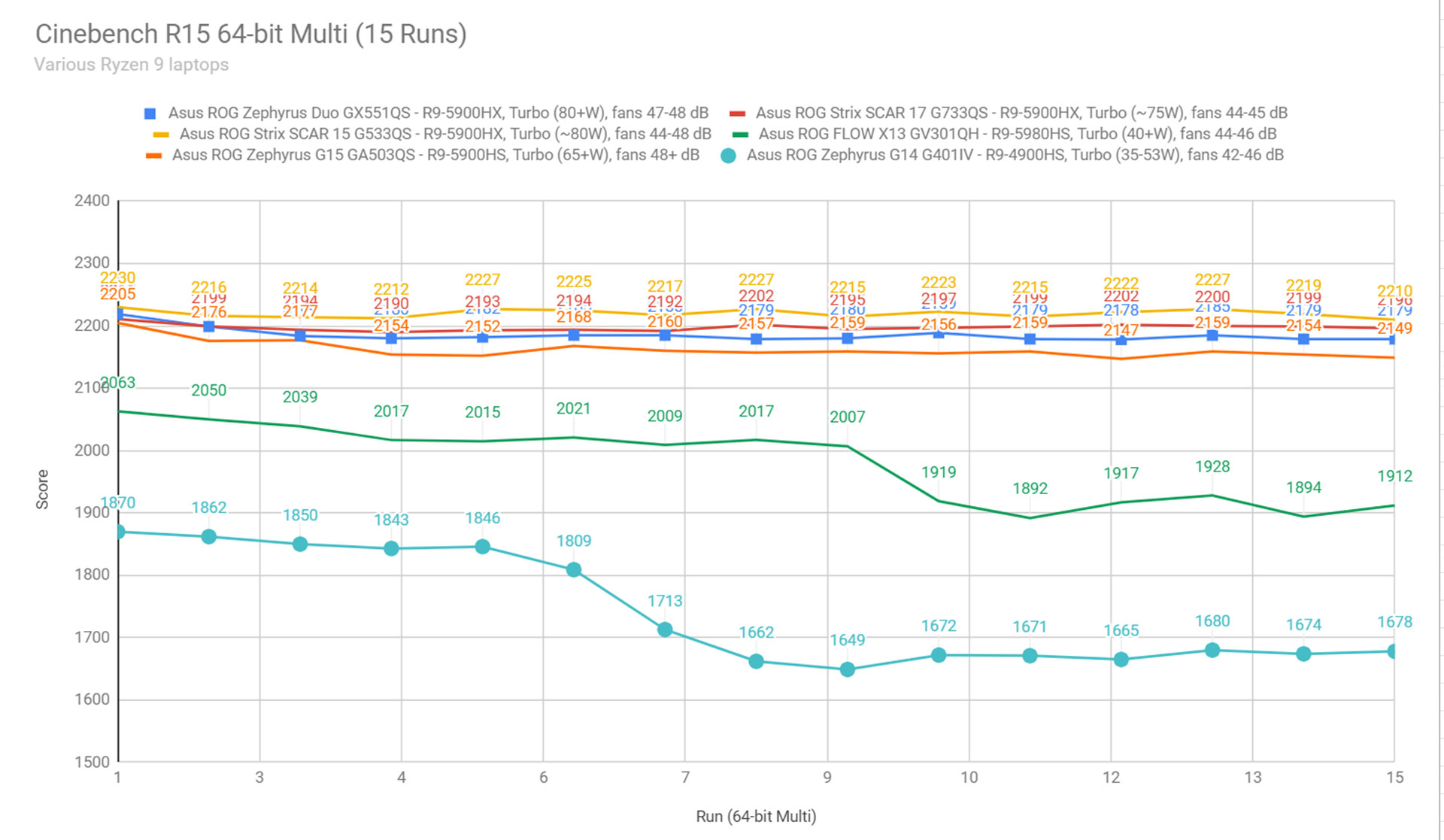 And here are a couple more tests:

Those Ryzen 9 5000 HS APUs are truly impressive at a fraction of the power required by the 5900HX implementations, and the gap between the 4000 and 5000 series Ryzen 9s is significant in both single-core tests and the longer-duration multi-threaded CPU loads. As for how these Ryzen 9s compare to the Intel options, we’ll cover that topic in a separate article.

With all these in mind, here are the lists of the rumored or announced portable 5980HS/5900HS/4900HS models down below, with the full-size Ryzen 9 5900HX/4900H options further down. This article is not a selection of recommended best AMD Ryzen laptops, instead, it includes lists of all the available models built on this specific Ryzen hardware. Deciding on the best pick for your needs and budget is up to you, but our reviews will greatly help.

That aside, these lists are a work in progress and we’re constantly updating them with new entries as they are launched, so if you spot something that should be in here and is not, please tell us about it in the comments sections at the end of the post.

This section is reserved for lightweight and compact designs. Most are built on the 35W Ryzen 9 HS platforms, either the 2021 Ryzen 5980HS/5900HS or the previous 4900HS generation, but some of these are built on full-power Ryzen H hardware, though.

Asus have exclusive access to the AMD Ryzen HS hardware for the time being (up to Q3 2020), and we’ll update once more Ryzen 9 4900HS ultraportables are available.

This section includes the full-size notebooks built on the 45+W Ryzen 9 5900HX and 4900H hardware platforms. The Ryzen 9 5980HX is not yet available in any retail product, but that might change in the near future.

Also, keep in mind that most of the AMD-based budget and mid-tier gaming laptops such as the Nitro 5, Legion 5, Legion 5 Pro, are not available with Ryzen 9 processors, and only top at AMD Ryzen 7 5800H/ AMD Ryzen 7 4800H configurations, which we’ve covered in this separate article.

Furthermore, most of the Eluktronics/Schenker/XMG/Aftershock models based on TongFang and Clevo barebone designs are also not available with Ryzen 9 5900HX processors at the time of this update, most likely due to allocation shortages with the current world situation. That should change in the next few months, and I’m especially looking for a Ryzen 9 configuration of the Prometheus 17 model with the 150+W RTX 3080 GPU, currently the most powerful AMD notebook configuration available out there.

I’ll also add that while most of these Rzeyn notebooks ship with Nvidia graphics, some models are now available with AMDs Radeon RX 6000M mobile graphics based on RDNA2. Check out this article for more details on the RX 6800M, 6700M, and 6600M chips.

Please keep in mind that we’re constantly working on updating these lists and adding new products as they are released, but errors might slip in despite our best efforts to keep things accurate. If you spot any mistake or any product that should be in here and is not, please let us know in the comments section down below.

Furthermore, if you’re interested in the wider range of AMD Ryzen 7 5800H and Ryzen 7 4800H mid-range laptops that are available in stores these days, you’ll find them listed in this separate detailed article.

We’ve also reviewed many of the available Ryzen 5000 and 4000 series notebooks here on the site, as well as compared the performance and benchmarks of the several Ryzen H processors and their Intel counterparts in these articles: one and two.