The CyberPower Infinity X99 Super is the latest system to emerge from the high-end PC builders at CyberPower’s UK division. This machine deploys a hugely powerful Intel processor in order to try and fight back against a year where AMD has ruled the roost when it comes to multi-core processors and multi-threaded workloads.

The CyberPower Infinity X99 Super revolves around an Intel Core i9-9900KS for UK buyers and a Core i9-9900K for US customers. The i9-9900KS is a beast of a CPU: its base speed of 4GHz uses Turbo Boost to hit a peak single-core speed of 5GHz, and it has eight cores that use Hyper-Threading to address sixteen concurrent threads. The US i9-9900K is barely slower.

The Core i9-9900KS and i9-9900K are easily powerful enough to handle gaming, but no games need that number of cores. Instead, this chip is designed for creative tasks, like content creation, video work and photo-editing – areas where applications tend to have a better time if they have more cores available.

The Nvidia GeForce RTX 2080 Super is one of the most powerful consumer cards available today, and the card used in this machine comes from MSI. It has the usual 3,072 stream processors and 8GB of GDDR6 memory with a speed boost when compared to older cards.

MSI has made some of its own tweaks to the core. The core clock remains at 1,650MHz and the Boost clock has been improved from 1,815MHz to 1,830MHz.

The rest of the specification is rounded out by 16GB of 3,200MHz memory. That’s a good amount for gaming and for most content creation tasks. However, people who want to run particularly demanding applications may want to upgrade to 32GB.

Storage is handled by a 512GB Intel 660p SSD and a 2TB hard disk. That’s decent: the former drive is large enough to hold several key games and productivity tools, and there’s loads of space on the secondary disk.

The UK version of this machine uses an MSI MPG Z390 Gaming Plus motherboard. It’s good when it comes to the basics. t has space for spare memory, numerous free PCI-Express x1 sockets and it has a good selection of RGB LEDs. It also has two spare M.2 sockets, with one used for SSDs and a second smaller socket that can accommodate wireless modules.

Explore the details, though, and the MSI board has some notable limitations. The second PCI-Express x16 slot isn’t fast enough for a second graphics card, for instance. And, because this board uses the Intel Z390 chipset, the board doesn’t support PCI-Express 4.0. AMD systems do support this new standard, and therefore those AMD-based systems can handle newer, faster SSDs.

There are on buttons anywhere for tweaking or overclocking, and no extra CPU power connector for extra electricity either. At the rear, you get single USB 3.2 Gen 2 Type-A and Type-C connections and two USB 3.1 Gen 1 ports, but that’s it – quite a simple selection.

US buyers don’t get that MSI motherboard – instead, they get the Asus Prime Z390-P. It’s a very similar board, with a good core specification including spare memory slots, free M.2 connectors and plenty of vacant PCI-Express x1 sockets. CyberPower has also added a wireless card to both versions of this machine.

However, the US build’s Asus board also has similar limitations, including a lack of real dual-GPU support. The Asus board also doesn’t have a Type-C connector at the back panel.

The final component, the power supply, is decent. The Corsair Vengeance 650M unit is semi-modular, which increases versatility, and it has an 80Plus Silver efficiency rating. However, a fully modular unit would have been more welcome.

The CyberPower Infinity X99 Super has a good core specification, then, including that eight-core Intel chip.

For US buyers, this Intel-based machine offers good value. An equivalent machine from CyberPower with the eight-core AMD Ryzen 7 3800X processor costs around $2225, and a rig with the twelve-core Ryzen 9 3900X sits at $2,385. Both of those rigs are pricier than the Intel machine.

However, in the UK, those two AMD PCs come out at around £1,751 and £1,840 – so AMD-based machines can be a little cheaper than this Intel-based specification.

Need more news on the latest kit? Click here to check out the latest headlines.

he UK version of the CyberPower Infinity X99 Super uses a Cooler Master MasterBox NR600 case. It’s a good-looking enclosure, with three RGB LED fans that glow through the meshed front panel. There’s more lighting elsewhere. Two roof fans and one exhaust fan are all synchronised with RGB LEDs. There’s a band of lighting around the edge of the case.

The internal layout offers no surprises, but it’s still good. The cables at the bottom of the chassis are hidden by a PSU shroud. Rubber grommets on the motherboard tray allow cables to be routed neatly. CyberPower has done a good job at the front of the case, with tidy cabling throughout.

The chassis is reasonably large, too. That makes the interior spacious – the Cooler Master MasterLiquid cooler is a 240mm unit, but it’s barely visible. There’s loads of room to work and easy access to all of the main components. The case has a whopping five spare 2.5in drive mounts and room for three 3.5in hard disks.

The Cooler Master case is not perfect. Around the rear the cable-tidying is not evident – it’s a bit messy. Build quality is also inconsistent. The MasterCase’s internal skeleton and side panels are both strong, but the PSU shroud and the plastic front panel are a bit flimsy.

American buyers don’t get the Cooler Master chassis, but CyberPower’s selection of enclosures for US buyers is just as good. 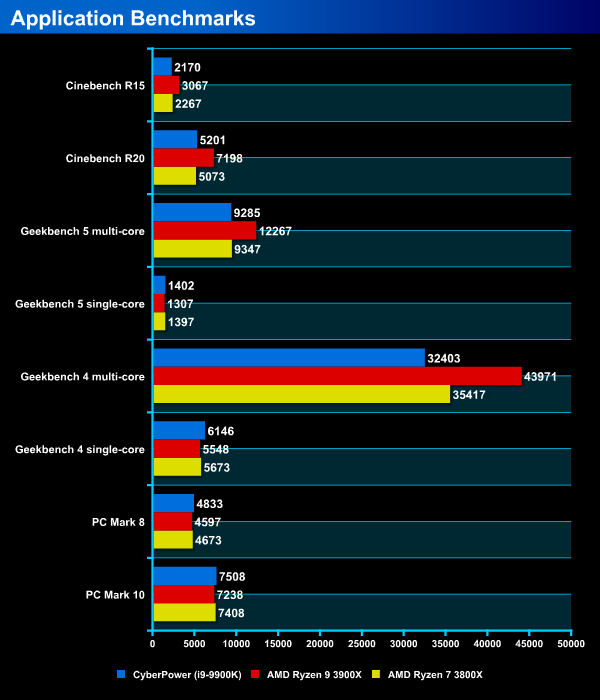 The eight-core Intel i9-9900KS inside the CyberPower Infinity X99 Super is a capable, versatile processor, but it struggles against AMD in lots of benchmarks. Expect the same level of performance from the Core i9-9900K that’s in the US version of the machine.

It does a reasonable job of competing against the AMD Ryzen 7 3800X. That’s an eight-core chip with speeds of 3.9GHz and 4.5GHz – and a price that’s far lower than the Intel chip.

The Core i9-9900KS was faster than the Ryzen 7 3800X in both PC Mark 8 and 10, which bodes well for everyday productivity – those tests use Office tools and video-conferencing utilities. The Intel chip was faster in both Geekbench 4 and 5’s single-core tests, too, which has traditionally been a strength for Intel’s silicon.

However, the i9-9900KS inside the CyberPower fell behind the Ryzen 7 3800X in both Geekbench multi-core benchmarks and in Cinebench R15. That’s not a particularly good result for a chip that’s twice as expensive as its rival.

The CyberPower’s chip competed against the pricier Ryzen 9 3900X in many of the same ways. The Intel chip remained a little faster in PC Mark’s everyday benchmarks, and it remained marginally quicker in Geekbench’s single-core tests.

However, the i9-9900KS was blown away by the twelve-core Ryzen 9 3800X in Geekbench 4 and 5’s multi-core tests, with the AMD chip opening leads over several thousand points. The AMD chip was significantly quicker in Cinebench too.

So, where does that leave the Core i9-9900KS? Suffice to say that it’s still a very fast chip. It won’t cause any gaming bottlenecks, and it’s better than AMD’s chips when it comes to single-threaded tasks. So for office applications, photo-editing tools and browser-based work, Intel’s chip is the better option.

However, AMD’s chips are better in multi-threaded tests. That means that AMD’s Ryzen 7 and Ryzen 9 parts remain better options for content-creation, video-editing and other applications where having more cores is beneficial. And if you’re using really intensive software, the twelve-core Ryzen 9 3900X won’t cost much more and is a significantly more powerful CPU.

In several other areas the CyberPower is a little ordinary. The SSD’s read and write speeds of 1,834MB/s and 983MB/s are fine, and won’t slow you down. However, pricier SSDs offer twice as much pace – and so those SSDs will serve up better booting and loading times.

The CyberPower is pretty loud, too. The six case fans produce a consistent, noticeable rumble, no matter the task. A headset or speakers will drown the noise out. It’s still worth noting that the CyberPower is louder than most other machines at this price and with this specification.

It’s a little disappointing given the fine CPU and GPU temperatures of 85°C and 72°C.

And, of course, it’s easy enough to disconnect most of those case fans without the temperature being adversely affected – but buyers shouldn’t really have to do that themselves.

The RTX 2080 Super is an excellent graphics card that produces fast, consistent frame 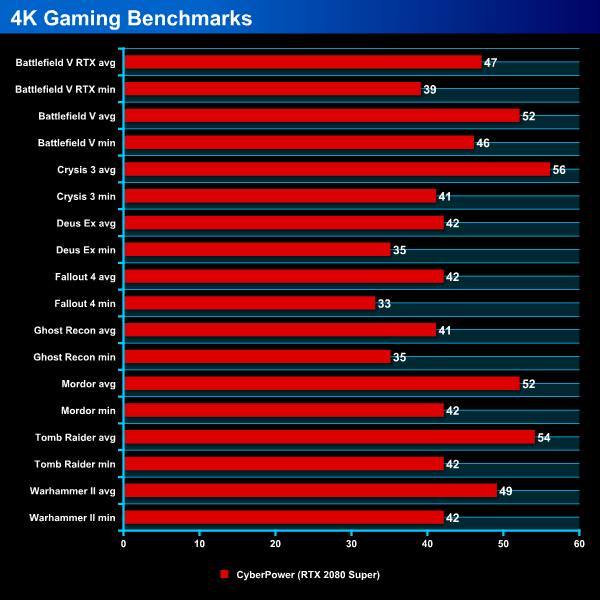 In 1440p benchmarks this overclocked card delivered minimum framerates that almost always got above the hallowed 60fps point. Its averages ranged between 64fps and 119fps.

It’s great pace. It means that any single-player game will run smoothly at 1440p and on widescreen panels. Ray-traced games will run well here, too. There’s easily enough speed to handle esports titles at beyond 200fps. That means you can run games on monitors with the highest refresh-rates too.

The RTX 2080 Super can handle 4K gaming, too. Its minimums at 4K were always better than 33fps, and its averages ranged from 41fps to 56fps. You won’t always get 60fps on this GPU and you may have to fiddle with graphics settings to get the toughest games running smoothly especially in the future, but the RTX 2080 Super can handle this high-end resolution better than virtually anything else out there today.

It’s also worth mentioning that machines with Intel CPUs tend to be a little quicker than AMD-based rigs when it comes to gaming, so that’s a big advantage.

Click here to read our verdict on the best laptops in 2019 for gaming, work and home use!

In many respects the CyberPower Infinity X99 Super is a very effective PC. The RTX 2080 Super is a consistently fast GPU, and the Core i9 processor is great in games and single-threaded applications – no matter whether you’re buying the US or UK builds, with their slightly different chips. The Intel CPUs also remain very good for content-creation and other productivity applications. The case is decent and eye-catching, it’s got plenty of memory, and CyberPower offers one of the most generous warranties in the business.

However, there’s no denying that this machine has weaknesses. Whether you’re buying the US or UK versions of this machine, the motherboard is basic but lacks connectivity and upgrade paths. The SSD could be faster, and the system is too loud.

The Core i9-9900KS is a very good chip, but in some situations you can find rigs with the AMD Ryzen 9 3900X for a little more cash – or for less money. For productivity, that twelve-core CPU is significantly better. It’s also possible to find AMD Ryzen 7 3800X machines for less, too, depending on where you’re buying.

However, it’s worth bearing in mind that those AMD-based machines are sometimes better in productivity applications, with the Ryzen 9 3900X proving a particularly strong contender thanks to its twelve-core design.

The strength of Intel’s CPU and Nvidia’s RTX 2080 Super make the CyberPower a great option if you want to balance gaming and productivity, but the strength of AMD’s CPUs and the CyberPower’s specification niggles mean that we can’t quite give it an award, especially if you need a rig for work.