Google has always been pretty hazy on any details about winning featured snippets. This was the case when they were first introduced, making them something businesses considered to be the cherry on top of their SEO efforts, which is still largely the case. Having first-hand knowledge about the value and power of featured snippets, Brado teamed up with Semrush to conduct the most comprehensive research around featured snippet optimization to uncover how they really work, and what you can do to win them.

Revealing the highlights from a Featured snippets study that analyzed over a million SERPs with featured snippets present, this post unwraps actionable suggestions on amping up your optimization strategy to finally win that Google prize.

With billions of search queries run through the Google search box each day, our study found that around 19 percent of keywords trigger a featured snippet. Why does this even matter? Featured snippets are known to drive higher CTR – as another study uncovered, they are responsible for over 35 percent of all clicks.

Further proving the immense power of featured snippets, our study showed that they take up over 50 percent of the SERP’s real estate on mobile screens.

Combine this with our findings that 99 percent of the time featured snippets take over the first organic position, and that they are in most cases triggered by long-tail keywords (implying specific user intent), and you’ll get the reason behind incredibly high CTR numbers.

Are some industries more likely to trigger featured snippets?

In the study, we defined industries by keyword categories, discovering that, indeed, featured snippet volume is inconsistent across various segments. 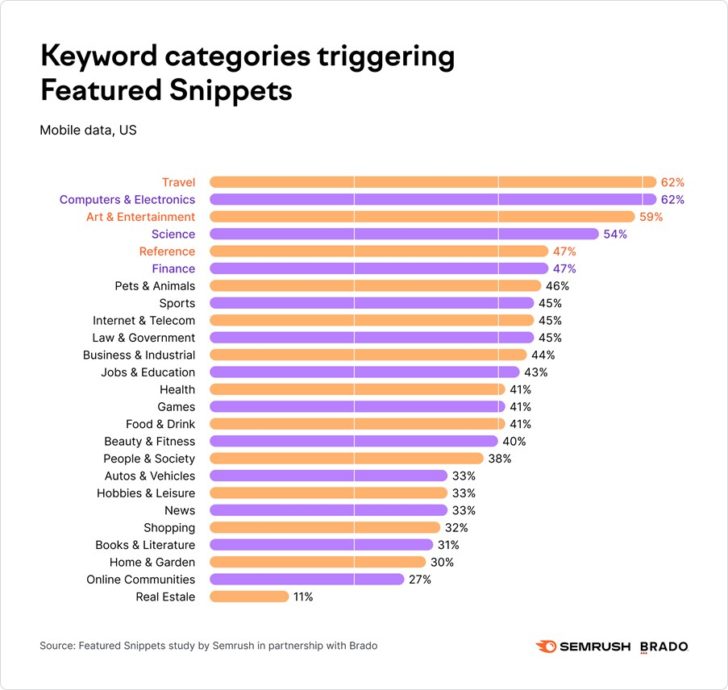 Yet on a domain level, the industry breakdown varies slightly, with Health and News sites having comparable featured snippet volumes.

You can discover the full industry breakdown within the study.

Featured snippets are all about earns, not wins

Just hoping your content will win you a featured snippet isn’t enough – as our study showed, it’s all about hard-earned content optimization results.

1. Optimize for long-tail keywords and questions

When it comes to optimization and keywords, employ ‘the more the better’ logic.

Our study found that 55.5 percent of featured snippets were triggered by 10-word keywords, while single-word ones only showed up 4.3 percent of the time.

One thing even better than long-tails is questions. In fact, 29 percent of keywords triggering a featured snippet begin with question words – “why” (78 percent), “can” (72 percent), “do” (67 percent), and in the fewest cases, “where” (19 percent). 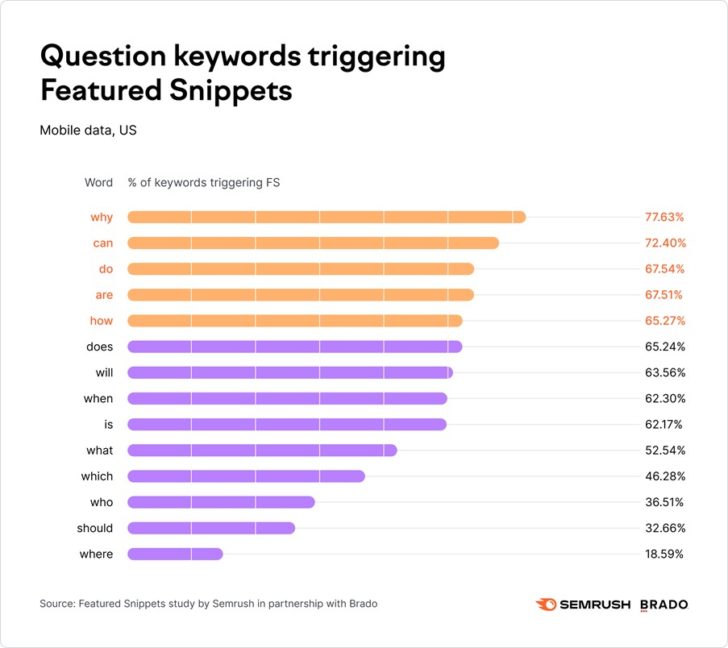 Of course, don’t blindly follow this data as the golden rule, rather see it as a good starting point for featured-snippet-minded content optimization.

Plus, keep in mind that content quality always prevails over quantity, so if you have a high-performing piece that features a 10-row table, Google will simply cut it down, showing the blue “More rows” link, which can even enhance your CTR.

As it turns out, URL length matters in Google’s choice of a site that deserves a featured snippet. Try to stick to neat site architecture, with 1-3 subfolders per URL, and you’ll be more likely to win.

Just for reference, here is an example of a URL with three subfolders:

In the “to add or not to add a post date” dilemma, based on our featured snippet analysis, we’d suggest that you publish date-marked content.

While fresh-out-of-the-oven content can be favored by Google, 70 percent of all content making it into the featured snippet was anywhere from two to three years old (2018, 2019, 2020), meaning once again that content quality matters more than recency, so you shouldn’t worry that putting a date on it will work against you.