A smart mid-range 15.6in convertible with a focus on frill-free value and competency

The Dell Inspiron 15 7000 is an upper-mid-range 2-in-1 foldable 15.6in laptop that sits between the more workaday Inspiron 5000 series and the very desirable, but rather pricey, XPS range.

That probably isn’t the most exciting introductory paragraph to a laptop review you’ll ever read but it underscores what Dell is punting here: frill-free value and competence in the (just) sub-£1,000 market.

Machines like the Inspiron 15 7000 attempt to offer you the practicality of a laptop and the convenience of a tablet. Doubters will argue that it’s a circle that can’t be squared and is the reason Apple doesn’t make a foldable MacBook. Others will contend that Windows is not, never has been and never will be, a proper touch-orientated UI in the way Android or iOS is.

Me? I think being able to fold a laptop through 360˚ – into “tent” mode – to watch a movie is a pretty handy feature, no matter what the shortcomings of the Windows 10 touchscreen UI are. And it’s one I’d be prepared to pay a little extra for over the cost of a conventional ultrabook.

At the time of writing, the Inspiron 7000 range started at £829 for the Core i5, 12GB Element Silver model. This is the machine Dell sent us for review – the Dell Inspiron 15 7506 – and prices rise as you add more memory and storage. At the top of the pile, the Core i7 Element Black model will set you back £1,279, although that does include a 3,840 x 2,160 display. There are also 13.3in models available, yet thanks to Dell’s rather erratic discount structure they currently come at a higher price.

If you’re in the market for a convertible Windows laptop, there isn’t a lack of alternatives: machines such as the HP Envy x360 and Lenovo’s Yoga 940 both fit the bill, even if they cost a wee bit more. The HP Envy x360 is the obvious competitor not least because, like the new Dell, it’s easily available in the UK, direct from the manufacturer. The Ryzen 7 chipset gives comparable performance and it has an excellent keyboard. On the downside, it’s more expensive and heavier. The Yoga is another attractive machine and comes with a bundled digital stylus, but you get less screen acreage for more money. If money is no object, Dell’s XPS range is generally regarded as the machine to go for – not least by us – but you’re looking at coughing up almost twice as much money as for the Inspiron 15 7000. If you don’t mind missing out on the 2-in-1 aspect, however, the £850 Honor Magicbook Pro is a cheaper alternative. Once you slip the Inspiron 15 7000 out of its box, you’re unlikely to be disappointed with your purchase: it’s smart, stylish and feels well-made. On a practical note, the matte-silver paint job does a good job at keeping fingerprints at bay.

The underside panel and lid are made from plastic, rather than metal, but neither feels nor looks any the worse for that. The lid has some flex to it but you’ll not notice that unless you apply deliberate twisting force. A metal chassis and palm rest ensure the main body of the device is solid.

Most importantly, the two hinges that give this Dell its 360˚ screen flip are solid and squeak-free. Even if you regularly fold up the 7000, I suspect the hinges will stay tight and last the course. Push the lid back past 90˚ and it levers up the back of the deck by just under 10mm to marginally improve the typing angle. The Inspiron 15 7000 doesn’t want for connections. Spread across the two edges, you’ll find a DC power jack, one full-size HDMI 2.0 output and two USB-A 3.2 ports, as well as a USB-C connector that supports Thunderbolt 4, Power Delivery and DisplayPort, and a 3.5mm audio jack. There’s an SD card reader too, but it’s rather slow and half the card always sticks out, inviting damage or loss.

Undo eight small Philips screws and the bottom panel can be easily removed, giving access to the Wi-Fi card (an Intel AX201 2×2), SSD and two SODIMM memory slots, should you feel the urge to upgrade your internals after purchase.

The rat-and-tail power supply that Dell supplies is a traditional yet functional black affair that can recharge the 53Wh battery from flat in under two hours.

As for the keyboard, the layout is spacious enough and the keys have a decent amount of travel, but it’s a little too bouncy for my liking. I’d describe it as a middling-to-fair rather than a good keyboard. The trackpad could also be better with a click action in the two lower corners that’s rather mushy and unsatisfying. I expected better from Dell.

The 1,920 x 1,080 pixel, 141ppi IPS panel is technically up to par for a machine in this price range. It has a maximum brightness of 330cd/m², which is good rather than great, but lighting levels are uniform across the panel.

sRGB colour coverage is good at 97%, as is the contrast ratio of 1,003:1. Out of the box and uncalibrated, the Delta E figure (the difference between the displayed colour and the original colour standard) was 2.16, which again is highly respectable. Some people like glossy laptop panels and some prefer a matte finish. I belong to the former group so I’m not complaining about the Dell’s rather reflective, albeit fully laminated, panel. I have to say, however, that I think Dell has missed a trick by restricting the higher-resolution panel option to the top-of-the-range Element Black machine.

The display isn’t what you could realistically describe as bezel-free: there’s 10mm of black border at the top, 5mm down the sides and 15mm at the bottom. The ten-point capacitive touch support worked faultlessly, but I can’t comment on the native Dell Active Pen support because Dell didn’t send us one for testing. For the more security conscious amongst you, there’s a shutter to mask the 720p webcam.

Tucked away below the palm wrests are a brace of downward-firing speakers. These are loud and detailed, but they really could use a bit more bass.

Hauling the coal inside this Inspiron is an eleventh-generation Intel Core i5-1135G7 Tiger Lake quad-core processor with 8MB cache and a burst speed of up to 4.2GHz.

Coupled with 12GB (8GB+4GB) of DDR4 memory running at 3200MHz, it’s more than up to the job of doing anything 99% of laptop users will require – and doing it quickly.

Graphics are handled by the Intel Iris Xe Graphics integrated GPU, arguably the first Intel integrated graphics chip that you won’t mind being foisted on you. As you can see from the benchmark results, this is a pretty powerful system, giving some previous-generation i7-based machines more than a run for their money. In fact, it’s generally accepted that the latest i5 processors offer around 30% faster multi-thread CPU performance than the eighth-generation Core i7-8565U. How’s that for progress?

To put that into everyday terms, the Inspiron 15 7000 can play Doom at a reliable 40fps-plus, as long as you knock the resolution down to 1280 x 720. I’m more than happy with that from a 2-in-1 ultrabook rather than a laptop with gaming pretensions.

Put the Inspiron 15 7000 under heavy stress and things can get a bit hot, though. While running Expert Reviews’ very demanding benchmark app, I regularly saw CoreTemp flash red to tell me one or more of the cores had hit 100˚C. Luckily, you can prevent this using Dell’s bespoke Power Manager control panel, which has four thermal settings – Optimized, Cool, Quiet and Ultra Performance – offering various trade-offs between performance, heat and fan operation. At full chat, the fan is just a little on the loud side. Storage comes in the form of a somewhat pedestrian 32GB + 512GB storage Intel Optane H10 M.2 80mm PCIe NVMe SSD. I expected it to be faster than our test results showed, but the relative tardiness has no significant real-world implications. Dell’s press pack for the Inspiron 15 7000 also lists models with regular SSDs ranging from 128GB to 2TB, although those don’t seem to be available in the UK. As for battery life, I’d describe it as “middling”, although Apple’s new ARM-powered MacBooks have rather rewritten the rules here. The Inspiron achieved a run time of 8hrs 20mins in our continuous video playback test with the screen set to a standard 170cd/m² brightness. That’s not too bad for a 15.6in Windows laptop, but it’s far from class-leading: the Lenovo Yoga 920 can do significantly better.

Dell has hit a solid boundary shot with the Inspiron 15 7000. The less-than-perfect trackpad and keyboard are blots on the landscape, but it nevertheless offers a compelling combination of value for money, power, convenience and style.

And it doesn’t harm matters that Dell’s offering is cheaper than the competition from Lenovo and HP. The easily accessible internals and that all-singing, all-dancing USB-C port are important selling points too, firmly establishing the new Inspiron 15 7000 as one of our favourite mid-range laptops. 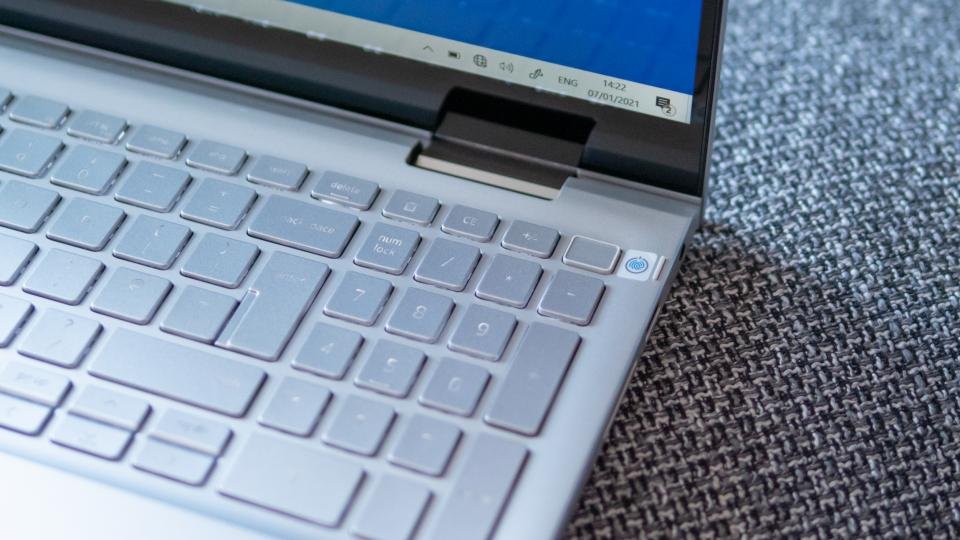