We’ve seen a flurry of new devices introduced over the past few months, all featuring brand-new processors from Intel and AMD. Many of them have been business laptops, and suffice it to say, there are some great options to choose from this year. Among them, the Dell Latitude 7330 and Lenovo ThinkPad X13 Gen 3 are two top contenders for one of the best business laptops of the year.

As such, if you’re struggling to choose between these two, we understand that, and we’re here to help. We’ll be comparing the features, specs, and design of the Dell Latitude 7330 and the Lenovo ThinkPad X13 Gen 3 so you can decide what works best for your needs. Right off the bat, one thing that’s worth mentioning is that the Latitude 7330 is available as a 2-in-1 laptop or a traditional clamshell, which can make a big difference. The ThinkPad X13 is only a clamshell laptop, though there is also the ThinkPad X13 Yoga if you want a convertible. With that out of the way, let’s dive into the other differences.

One of the most noticeable differences between these two laptops has to do with the display. This is one area where the ThinkPad X13 Gen 3 really pulls ahead, thanks to its 16:10 panel that’s much better for productivity. We’ve seen more and more displays with tall aspect ratios recently, especially on premium laptops, and the ThinkPad X13 is one of those laptops. With a taller screen, you get more space for content, whether that’s text on a webpage, rows in Excel, or UI elements on an app like Adobe Premiere. It also comes in up to a very sharp Quad HD+ resolution (2560 x 1600), which can also make more content visible at once depending on your settings. You can configure it with touch and Dolby Vision support, too. 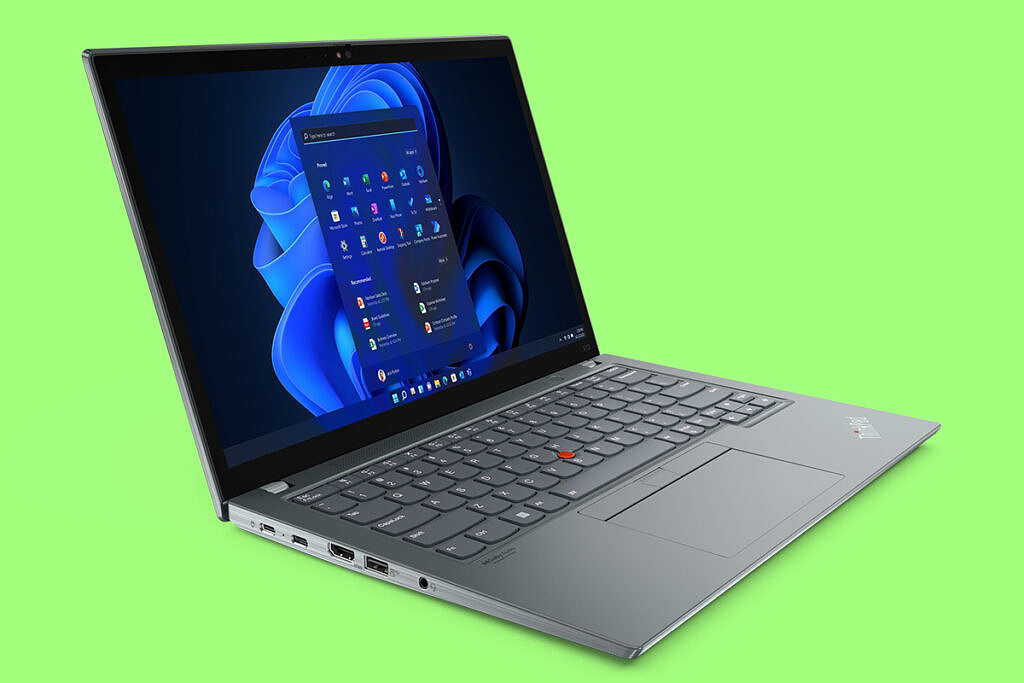 Meanwhile, the Dell Latitude 7330 also has a 13.3-inch panel, but it comes in a more traditional 16:9 aspect ratio. That’s still fine for many users, but once you’ve grown used to a taller display, it can be hard to go back. It comes in Full HD resolution (1920 x 1080), and that’s the maximum configuration. You can configure it with touch support, or even opt for the 2-in-1 model which also supports an active pen and lets you use the laptop as a tablet. If you want a 2-in-1 from Lenovo, you can always check out the ThinkPad X13 Yoga Gen 3 instead. 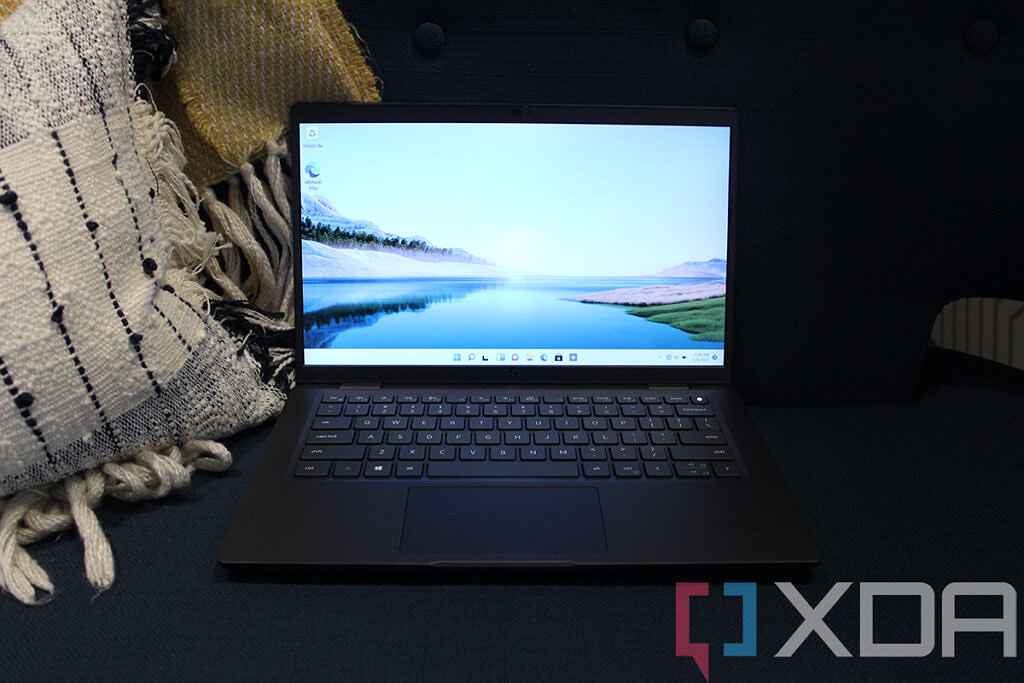 As for sound, both laptops have dual stereo speakers, which is about what you’d expect from a 13-inch laptop. Dell is leveraging its usual partnership with Waves MaxxAudio, while Lenovo simply says its speakers support Dolby Audio. The two laptops also have dual microphones for calls.

Above the display, both laptops give you the option for a Full HD camera with an IR camera enabling Windows Hello facial recognition. This is an optional upgrade, and both will likely have a 720p webcam in their default configurations. Still, just having the option for 1080p is great, and it’s a worthy upgrade if you plan on making video calls and meetings since you’ll look that much better.

Design: The ThinkPad is iconic, but the Latitude is a bit more modern

Moving on to the design, let’s start with portability, which is one of the key areas where the Dell Latitude 7330 beats out the Lenovo ThinkPad X13 Gen 3. The Latitude 7330 comes with a new “ultralight” configuration with a magnesium chassis, and that means it starts at just 2.13lbs. It does get heavier if you opt for the aluminum or carbon fiber models, and even more so if you get the 2-in-1, which starts at 3lbs, but it’s great to have a lighter option. It’s also just 16.96mm thick. 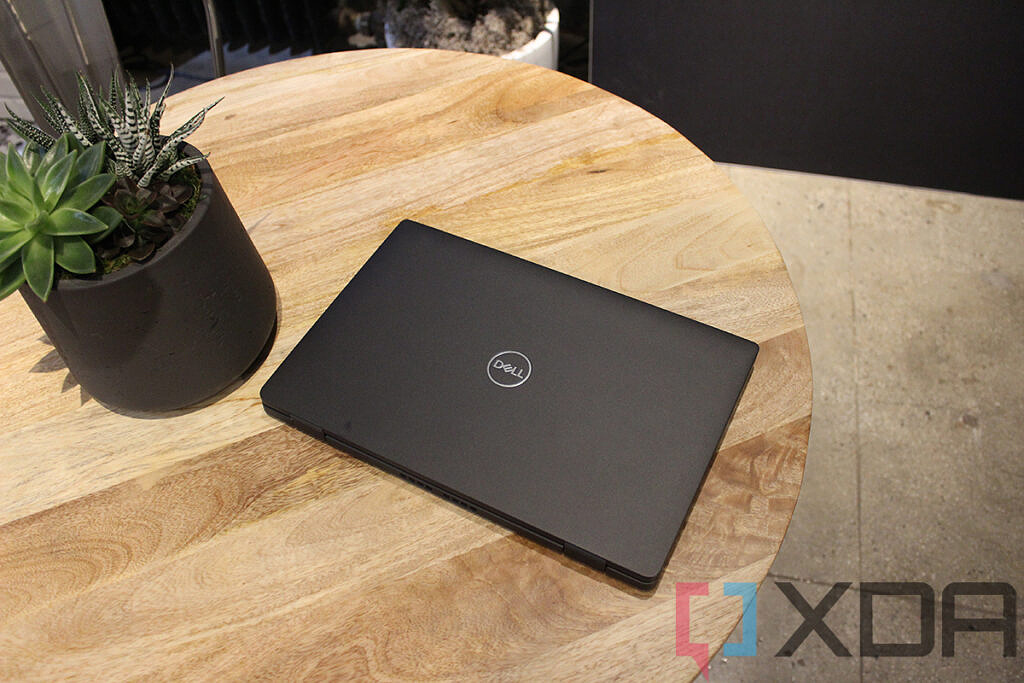 By comparison, the Lenovo ThinkPad X13 Gen 3 starts at 2.62lbs, so it’s quite a bit heavier in its base configuration, plus it measures 18.1mm thick. The Dell Latitude 7330 is definitely a bit more portable, but it’s worth keeping in mind that it will be a much closer match-up if you get it in aluminum or carbon fiber styles.

As for looks, it really depends on what you’re looking for. The design of the ThinkPad X13 Gen 3 keeps the iconic look of the ThinkPad family, featuring the black chassis with red accents. You can also get it in Storm Grey, but the overall look is similar. Plus, things like the red TrackPoint and duplicate mouse buttons are also here. It’s great if you love that traditional ThinkPad design, but others may find it outdated and unappealing. 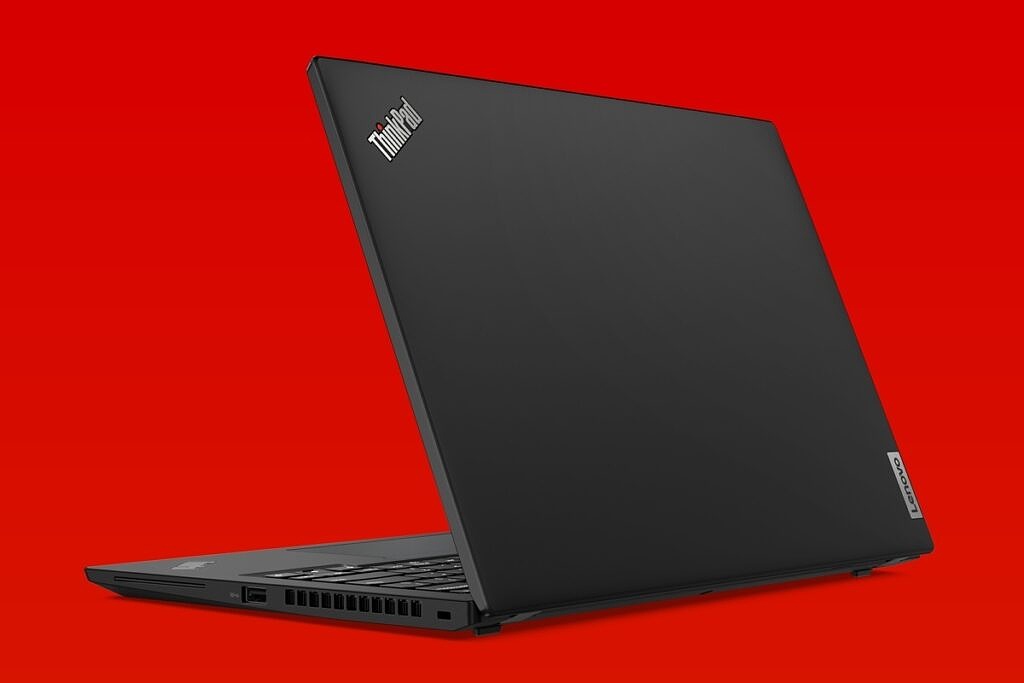 Meanwhile, the Dell Latitude 7330 has a more modern look with its metallic finish. The color mostly depends on the material you get. Magnesium and carbon fiber models are a very dark shade of silver, while aluminum is a much lighter color. Regardless, it looks a bit cleaner and sleeker, plus it doesn’t have legacy features like the pointing stick, so it feels a bit more modern overall. However, it’s not exactly an exciting design, either.

Ports and connectivity: The Lenovo ThinkPad X13 has 5G options

Finally, we come around to the ports on the two laptops, which aren’t that different. The Dell Latitude 7330 has two Thunderbolt 4 ports, one USB Type-A port, HDMI, and a headphone jack, plus an optional nano-SIM slot and Smart Card reader. That’s already a solid setup for a business laptop of this size. 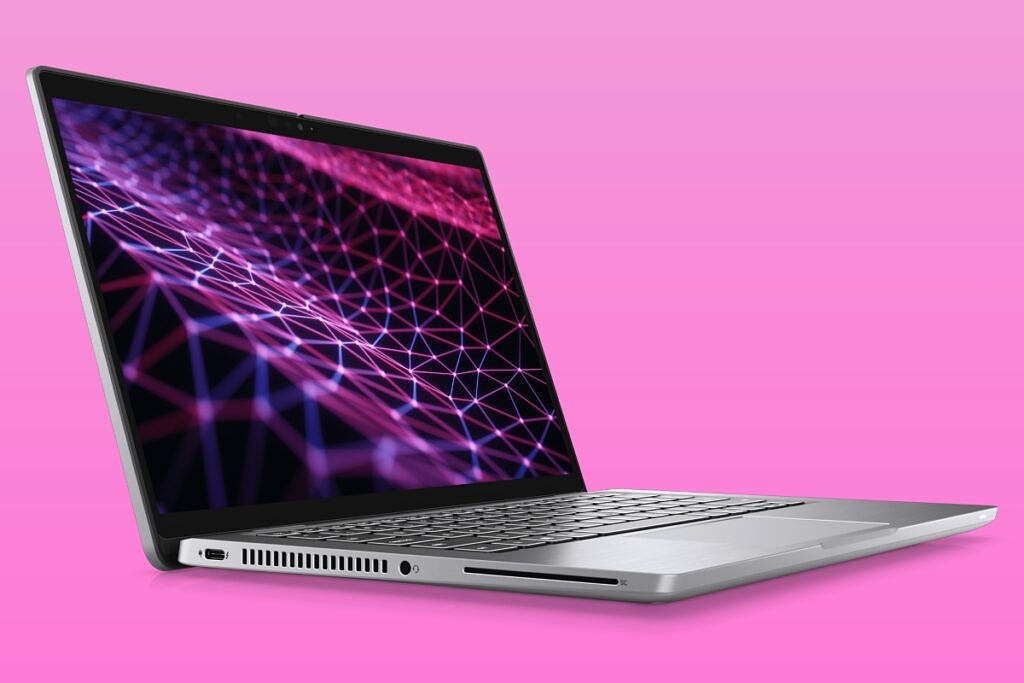 On the other hand, the Lenovo ThinkPad X13 Gen 3 has a similar setup, but instead of making room for the Smart Card reader, it has an extra USB Type-A port (two in total). That may be more useful for more users, but having the Smart Card reader can also be helpful in more specific scenarios. One thing to note is that the AMD version of the ThinkPad X13 doesn’t support Thunderbolt 4, but it does come with USB 4 support in one of the ports, so it should still support Thunderbolt docks and most of their features.

The ThinkPad X13 Gen 3 has a clear advantage in terms of wireless connectivity, though. It’s the only one of these two laptops to support 5G cellular networks as an option. Both laptops have a 4G LTE option, and that allows you to stay connected to the internet even if you’re away from a secure Wi-Fi network. With 5G, though, you can get faster speeds, especially as time goes on and the technology evolves. On the other hand, 5G is an expensive upgrade, so there’s that. Both laptops also support Wi-Fi 6E and Bluetooth 5.2, as you’d expect.

Just looking at the specs table at the top of this page, it may seem like the Lenovo ThinkPad X13 Gen 3 and the Dell Latitude 7330 have a lot in common, but that’s not necessarily true. Both of them do come with Intel’s 12th-generation processors, but the ThinkPad also offers the option for AMD Ryzen 6000 chips. We also don’t know whether Lenovo is using U-series or P-series processors inside the ThinkPad X13, so there are still some variables missing. Should Lenovo decide to use P-series processors, the ThinkPad X13 Gen 3 will have a big performance advantage.

In any case, let’s take a look at the options here. Intel’s P-series lineup maxes out with the Intel Core i7-1280P, with 14 cores and 20 threads, while the U-series goes up to a Core i7-1265U with 10 cores and 12 threads. Meanwhile, the AMD Ryzen 6000 PRO series is led by the Ryzen 7 PRO 6850U. All of these models are very recent and benchmark scores aren’t enough to paint a very clear picture, but we can get an idea of how they compare. We’ll also compare some of the mid-tier models in each lineup.

To be clear, benchmark scores aren’t necessarily indicative of overall performance, and this one in particular only tests the CPU. Still, you can get an idea of what performance might look like on these processors. Intel’s 28W P-series processors should offer significantly better performance, but all of these will make for a fast laptop. You’ll only need that top-tier performance if you have very intensive workloads.

In terms of graphics, Intel Iris Xe won’t be very different from the P-series to the U-series, though you’ll notice a difference between Core i5 and Core i7 models. But this is one area where AMD should pull much further ahead thanks to the new Radeon 600M graphics. AMD says this integrated GPU is faster than an NVIDIA GeForce MX450, so it’s going to be the best option if you need the extra performance for some light gaming or 3D rendering.

In terms of RAM, both laptops come with up to 32GB and Dell has confirmed that it’s using DDR4 RAM for its laptop, though Lenovo hasn’t specified what it’s using yet. As for storage, Lenovo offers configurations up to 2TB, double what you can get with the Latitude 7330. As for the battery, both laptops come with similar-sized battery options, so they should have similar performance assuming the configurations are identical on both sides.

After taking a look at all this, it’s probably fair to say that the ThinkPad X13 Gen 3 is a more interesting laptop in a few ways. It gives you the option for both AMD and Intel processors, it has a better display for productivity, and it has optional support for 5G.

Perhaps most importantly, though – it’s also much more affordable. The starting price of the Lenovo ThinkPad X13 Gen 3 is just $1,119 for the AMD version or $1,179 for the Intel model. That’s over $700 less than the Dell Latitude 7330, which starts at $1,899. To be fair, though, we don’t know what these base configurations include, since neither of the laptops is available yet. 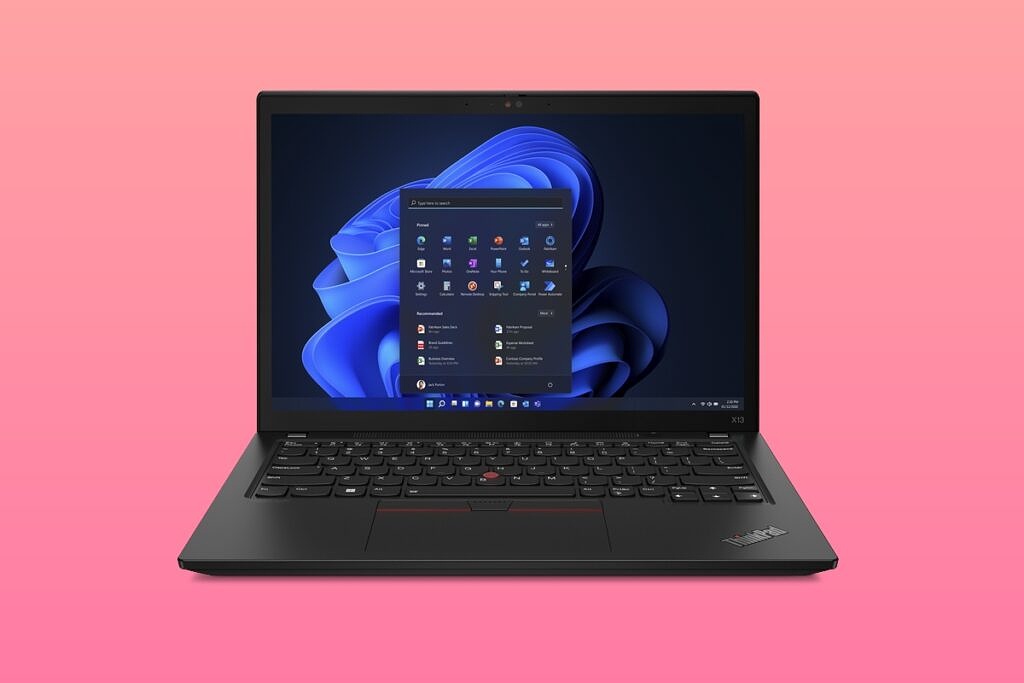 The Dell Latitude 7330 does have some benefits, too. If you choose the magnesium chassis, it’s significantly lighter and thinner. Plus, it has a more modern design, though that’s very subjective. You might also appreciate the option for a Smart Card reader built-in, something the ThinkPad doesn’t give you.

Ultimately, it’s up to you which one you prefer, but the advantages of the Lenovo ThinkPad X13 Gen 3 are likely to be more appealing to more users. We’ll still have to wait for some extra details on the processors used in each model, but generally speaking, that’s where our recommendation would go.

Regardless, neither of these laptops is available yet, so you have time to make your decision. In the meantime, you can check out the best Dell laptops or the best ThinkPads you can buy right now, so you can see more of what each company has to offer.

The post Dell Latitude 7330 vs Lenovo ThinkPad X13 Gen 3: Which one is better? appeared first on xda-developers.