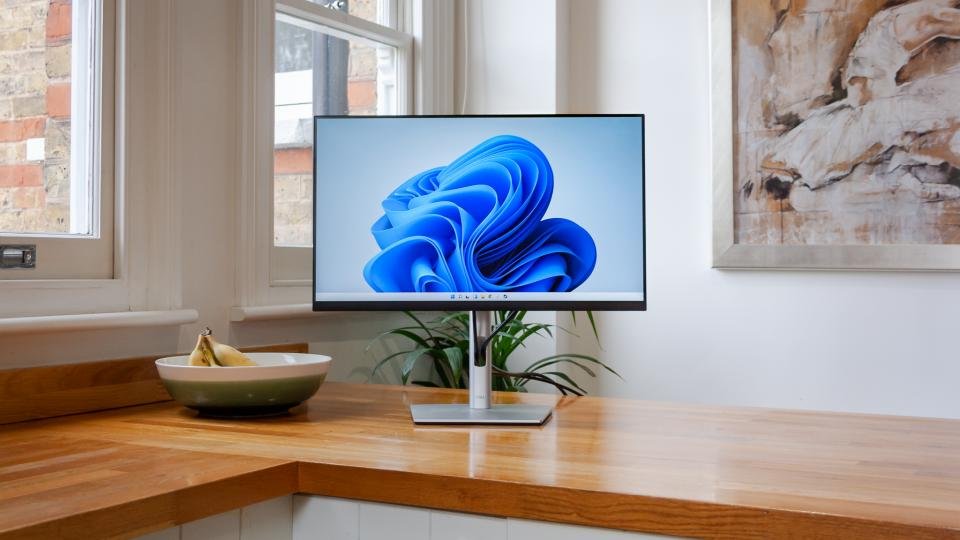 The Dell P2422HE is a dinky 24in productivity monitor with an extraordinary feature set. Beyond the normal video inputs and USB ports, this monitor also has a DisplayPort output that allows you to daisy-chain a second monitor to it; a USB-C port capable of carrying a video signal and supplying 65W of power; and an RJ45 Ethernet port, so you can hard-wire your network connection even if your laptop doesn’t have a network port of its own.

It also has a fully adjustable stand and a price tag that has – thankfully – dropped drastically since launch. The Dell P2422HE is therefore an easy recommendation for remote workers and small offices alike, although there are a couple of niggling flaws that should not be noted.

Dell P2422HE review: What do you get for the money? 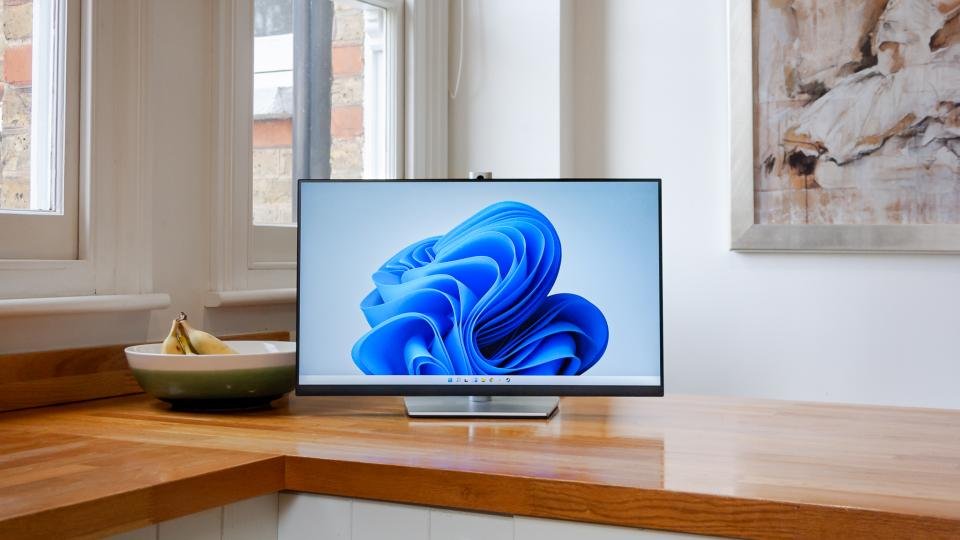 I’ve already outlined this monitor’s unusual port situation, but let me clarify. The P2422HE has one HDMI 1.4 port and one DisplayPort 1.2 input, plus a DisplayPort 1.2 output for creating a daisy chain. It also has four USB-A 3.2 Gen 1 ports, one USB-C 3.1 Gen 1 port for video duties and power delivery and an RJ45 Ethernet port for connecting your connected PC or laptop to a wireless router. There’s no USB-B port or 3.5mm jack.

The stand offers 150mm of height adjustment, 90 degrees of rotation (from landscape to portrait), 45 degrees of swivel left and right and 21 degrees of backwards tilt. The box contains a USB-C to USB-C cable and a DisplayPort 1.2 cable alongside the power cable and documentation.

The P2422HE is a good-looking monitor. Its silver stand and matte-black panel are both very Dell, and they help the P2422HE stand out from the legions of similar 24in monitors on the market at the minute. The panel’s bezels are unusually slim and give the impression that the P2422HE isn’t wasting an inch of space.

The P2422HE is far more than a pretty face, however. I was blown away by the feature list at first glance and I’ve only come to appreciate it more since. Building all four major adjustment options into such a simple-looking stand is no mean feat: I was impressed with the hidden swivel mechanism and the ease with which the monitor rotates into portrait mode. 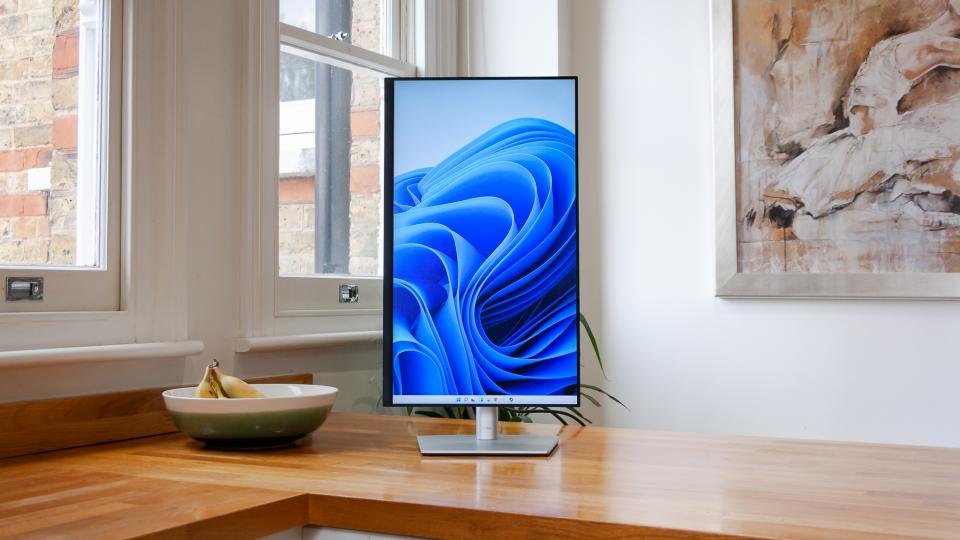 Of course, the biggest attraction here is the selection of ports. Dell markets the P2422HE as a “hub monitor”, and that’s I’d say that was pretty much on the money. This monitor covers every conceivable base and a few more for good measure. I’m particularly fond of the daisy-chaining feature, which I pushed to its limits by connecting the P2422HE to the 34in ultrawide Huawei MateView GT (with no difficulties whatsoever, I should add).

Then there’s the RJ45 port, which allows me to connect my Surface Laptop 2 directly to my router via the P2422HE’s USB-C socket even though the laptop has no Ethernet port or its own. It’s a laptop user’s dream.

However, these remarkable features won’t have quite the same impact if the monitor can’t perform well in testing. While the results on the whole are distinctly mixed, I should mention a few positives. Contrast sits at between 1,000:1 and 1,100:1, depending on the colour preset – par for the course where IPS monitors are concerned. The backlight is pleasingly uniform and doesn’t bleed through the edge of the display noticeably. 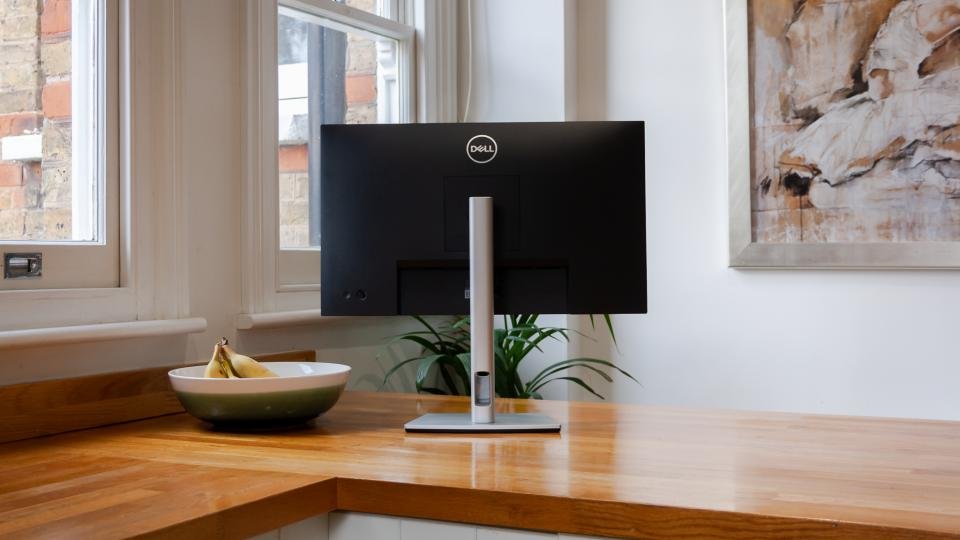 Out of the box, the P2422HE produced 109% of the sRGB colour gamut with an average Delta E colour variance score of 1.56. This is a good result that’s tarnished only by a maximum Delta E of 7.75 (some red tones were seriously wayward). Fundamentally, the Dell P2422HE is a fairly colour-accurate monitor, provided you stick to the Default colour preset.

Dell P2422HE review: What could be better?

Switch to any of the other colour presets, however, and you’ll be met with either severely inaccurate colour reproduction or colour temperatures that apply a heavy blue/red tint to the image.

In Movie mode, for example, the P2422HE settled on a bizarre colour temperature of 10,600K (heavy blue tint), with an average Delta E of 5.13 signalling inaccurate colour representation. In fairness, I normally recommend users keep a monitor in its default mode but I’ve yet to encounter such a baffling range of useless presets. 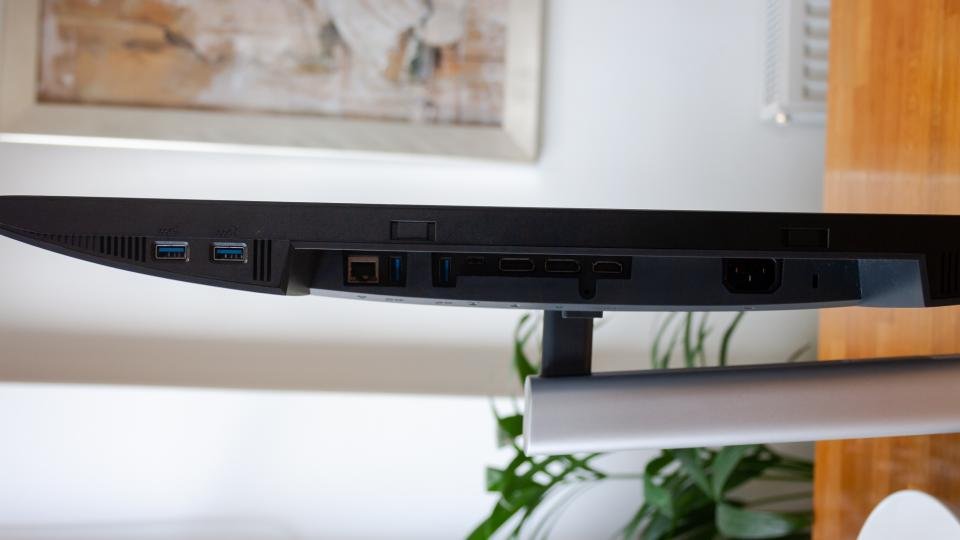 Performance-wise, the bad news continues. The P2422HE tops out at a peak brightness of 221cd/m² (199cd/m² in Default mode), which is lower than Dell’s quoted peak and substantially worse than rivals such as the BenQ GW2485TC. The result is simply that, in bright conditions, the P2422HE’s panel is harder to see than I would have liked.

I’m also not thrilled by the viewing angles on this monitor. As with similarly inexpensive IPS panels, this one suffers from a bit of IPS glow, which means that from certain angles it will appear as though the display is reflecting a white light. It’s not noticeable most of the time but when viewing dark content you might spot it.

Given the low maximum refresh rate (60Hz) and comparatively high response times, gamers should steer clear but that’s hardly a cardinal sin. The lack of built-in speakers or even a 3.5mm headphone jack is less forgivable, though, especially given the price of this monitor. I expect at least one or the other from every monitor I test and I can’t for the life of me work out why Dell would omit both.

Ultimately, the Dell P2422HE earns itself a recommendation for me by delivering a great feature set for office workers at a price that – after a hefty drop – won’t give you nightmares. Yes, I expected more from this monitor’s panel, and I’m still baffled by the lack of any kind of audio, but it’s not hard to overlook these things given that they’re unlikely to be missed by the average work user.

If you’re a home user looking for the kind of monitor your office might ordinarily provide, or an office administrator looking for a well-specced and inexpensive monitor with which to furnish your employees, the Dell P2422HE is a good choice.