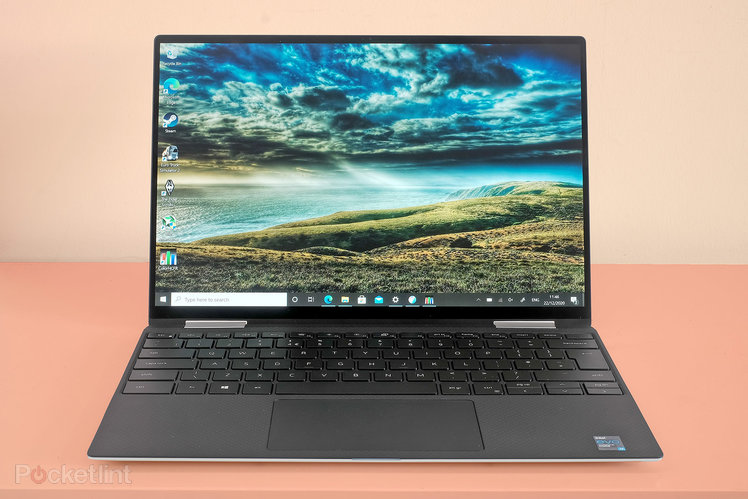 The Dell XPS 13 2-in-1 has been around long enough to be considered an evergreen laptop series. It’s an XPS 13 with a full fold-out hinge. You can prop it up in a “tent” position, set it up as an in-bed mini TV, or use it like a laptop.

Big real-world upgrades for 2021 are all about the progress Intel has made. The Dell XPS 13 2-in-1 has one of Intel’s Xe graphics chipsets. It lets you play games that just weren’t in the conversation for integrated graphics a while back, like The Witcher 3.

There are a couple of problems though: the latest XPS 13 2-in-1 costs a small fortune. And it has an extremely shallow keyboard that we don’t find all that comfortable for typing. You’ll have to decide how much these points matter to you, because the XPS 13 2-in-1 is otherwise hard to criticise in other respects.

The Dell XPS 13 2-in-1 is like a regular XPS 13 subjected to several dozen yoga retreats. It has the familiar carbon fibre keyboard rest, an ultra-stiff aluminium lid, and a metal underside. But the hinge folds all the way around until the back of the lid meets the bottom.

These hybrid laptops were more popular years ago. Real hot stuff, y’know. But it’s a good idea to have a think about whether you’ll actually appreciate the flexibility on offer for the added price premium. 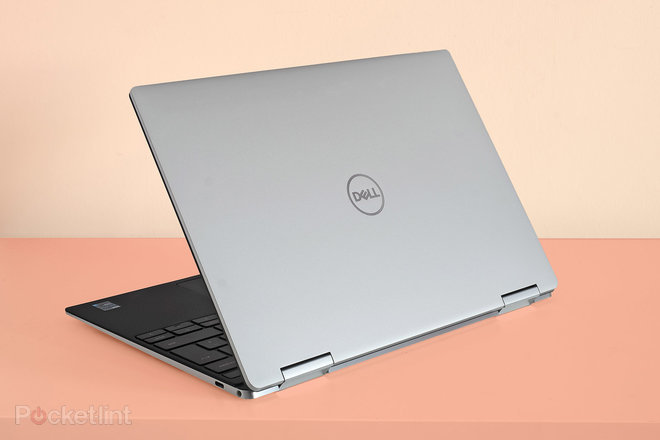 That hinge obviously doesn’t come for free. But it is decent, avoiding much of the wobble often seen in less well-designed hybrid laptops. There’s also no glaring sign this 2-in-1 is actually a hybrid. The hinge isn’t big or built-up, there’s just a little more clearance around its main bits.

Real talk: we think the standard XPS 13’s minimalist keyboard plate is more attractive, but there’s not much in it.

You buy an XPS 13 series laptop for its distinctive carbon fibre style and excellent build, not for show-off weight and thickness stats. However, Dell has done its best to minimise the 2-in-1’s footprint. Screen borders on all sides are slim, if not class-leading, and the display has a 16:10 aspect ratio rather than the usual 16:9 – making a laptop that’s less wide per inch of display diagonal.

Ours has the lower resolution display. Your Windows 10 home screen icons and document fonts won’t look as sharp as they would on the 4K version, but the choice here isn’t simple as price versus quality. 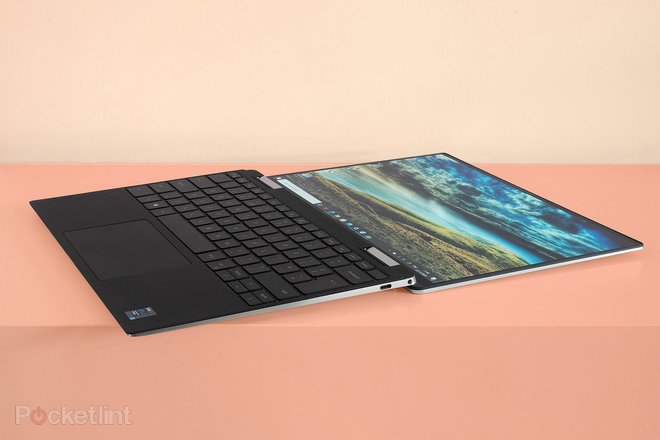 This is great news if you want to work outdoors. And while the Dell XPS 13 2-in-1 has a glossy screen, it is much less affected by reflection than most as Dell uses a very good anti-reflective layer. This dulls the white block reflections so they are not so distracting.

Colour is excellent, fit for imaging work. Contrast is great – and once again around 10 per cent better than Dell’s own claim of 1500:1.

The XPS 13 2-in-1 may be Dell’s lower-end option with this FHD+ resolution, but this is no low-end screen. It’s a high-end one without the extra pixel density. This is a good excuse for the Dell’s high price.

There are just a couple of caveats to note. This is a 60Hz screen, not the high refresh-rate kind you see in gaming laptops. And despite Dell’s claim of HDR 400 support, Windows 10 recognises it as a standard dynamic range screen. HDR in laptops is only really worthwhile with OLED screens anyway. 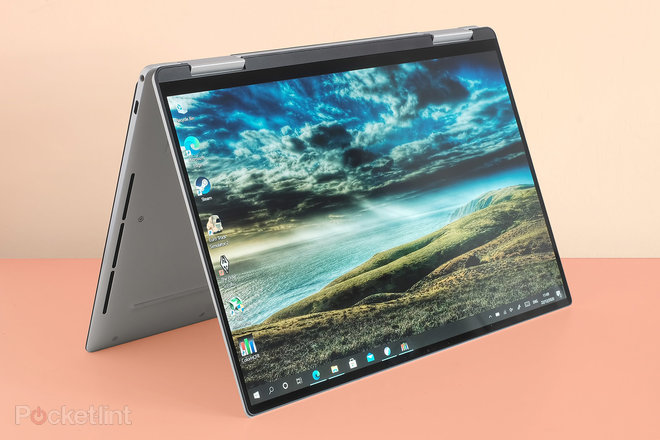 The XPS 13 2-in-1 also supports a Dell active pen stylus – one with a graphics tablet-like 4096 pressure sensitivity levels – but you don’t get one in the box. Companies like HP and Lenovo tend to bundle their stylii.

The keyboard is the part of the Dell XPS 13 2-in-1 we like the least. It is very shallow and clicky, lacking the mellow “clonk” key actuation of the best laptop keyboards. 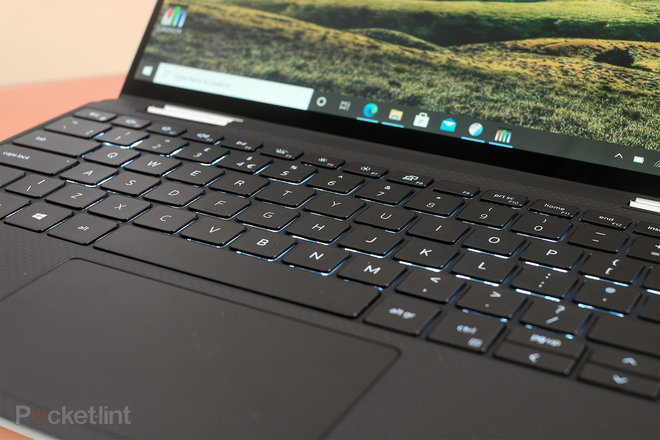 There’s very little weight to the XPS 13 2-in-1’s keys, and we enjoy typing on almost all of the non-Dell alternatives more.

HP Envy and Spectre, Acer Swift, Lenovo Yoga and ThinkPad: all have meatier key setups. Apple started this trend for shallow, feather-light keyboards, even it has begun to step back by putting a chunkier mechanism in the MacBook Pro 16.

This isn’t a mistake, of course. Dell deliberately uses this keyboard. And just because it’s thin, high pitch and clicky, it doesn’t mean it’s low-quality hardware. We just don’t like its style much.

The XPS 13 2-in-1 does have a solid two-level key backlight, and a clever fingerprint scanner that’s built into the power button above the backspace key. 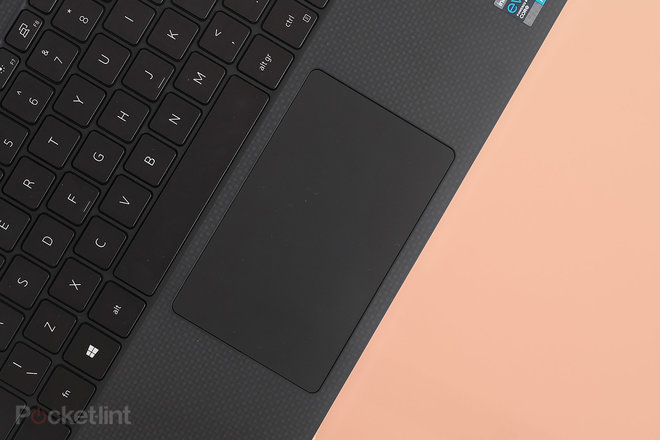 Dell’s touchpad has little in common with the keyboard. Which is a good thing. Its clicker has a darker character with a nice amount of resistance, and the surface uses exemplary textured glass. The pad is large too, just not MacBook large. So no major complaints here.

New Dell XPS models tend to arrive at a rhythm set by Intel’s processor releases. Most of these are not that easy to get excited about. A 12 per cent performance increase year-on-year when the predecessor already had enough power isn’t going to change lives.

For 2021 it’s a bit different, because of two little letters: Xe. The Dell XPS 13 2-in-1’s Core i7i1167G7 has an Xe graphics chipset, which is Intel’s response to AMD having soundly beaten its integrated graphics performance for years.

Intel Xe is miles better than the UHD 620 and Iris Plus chipsets seen in older thin and light laptops. It genuinely changes how some might use this 2-in-1. 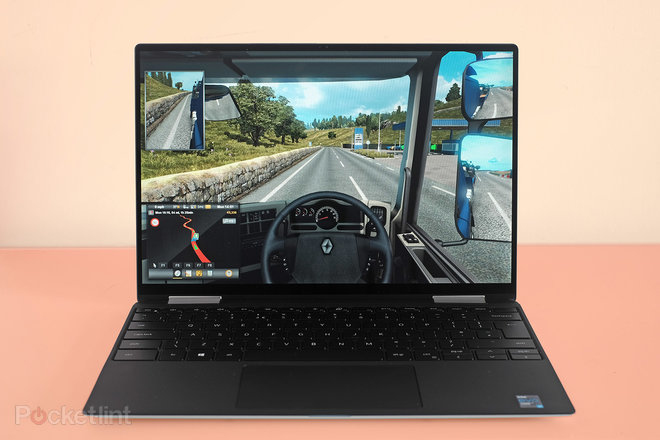 For example, you can comfortably play Euro Truck Simulator 2 at High graphics, with frame rates of around 30-40fps. Skyrim runs fine at Ultra settings. You can even play The Witcher 3, at 1200p, using the Low preset (or head down to 720p resolution for acceptable results at High graphics). Yes, The Witcher 3 hasn’t been a benchmark for gaming performance for some time now. But for a laptop with no dedicated graphics hardware, we think that’s pretty good.

There’s less change in the Dell XPS 13 2-in-1’s 11th Gen CPU side in real terms. It’s not because there is no performance boost compared to the last 10th Gen computers – there is, and quite a big one – but it is not the sort of jump that should make you want to upgrade if you already own a 10th, 9th or 8th Gen Intel-powered laptop. More exciting things are happening over at AMD’s and Apple’s processor labs right now.

Much of the pleasant smoothness of the Dell XPS 13 2-in-1 is down to its very fast SSD storage, which helps minimise app load times. 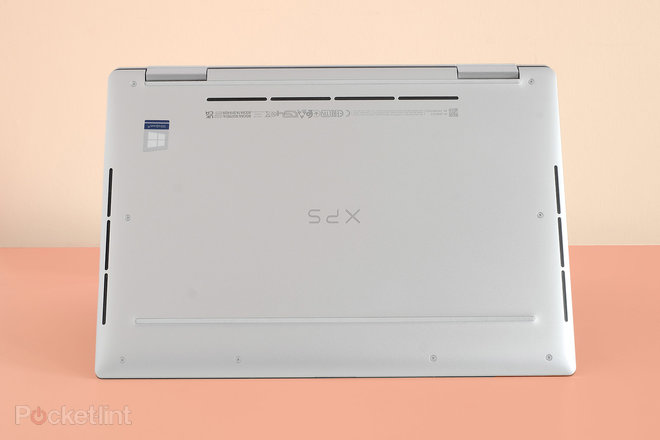 We’re also pleased by how little noise the laptop makes, even under strain. The XPS 13 2-in-1 has two fans, with a vapour chamber between. And while their tone is pretty high-pitch, which can be distracting, the noise never seems to get remotely loud in decibel terms.

The Dell XPS 13 2-in-1 has a 51Wh battery, a mid-size power source used to balance the size of the laptop with stamina. And it seems to have worked pretty well.

Setting the laptop to stream at YouTube video at 1080p resolution the XPS 13 2-in-1 lasts 12 hours 15 minutes. This is the longest you can reasonably expect it to last in any realistic use scenario, but means there’s plenty of headroom to stay above eight hours of all-day use. 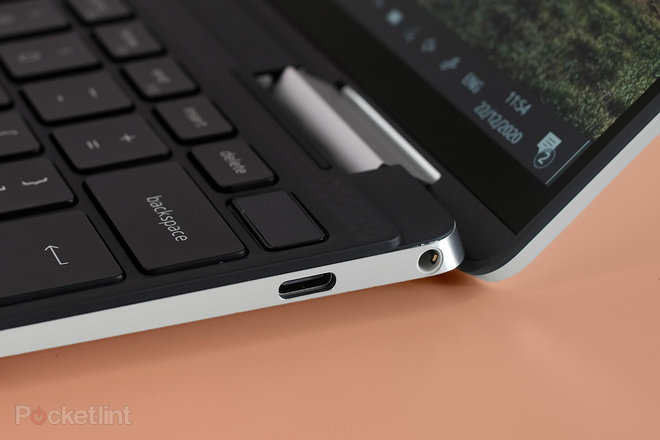 However, we can’t ignore that we’ve seen much better results recently from some AMD CPU-powered laptops like the Lenovo Yoga Slim 7. That lasted almost 17 hours in the same test, while Apple’s MacBook Air and MacBook Pro last substantially longer, particularly under strain.

Still, if we’re at the point we can half-complain about 12-hour battery life, that’s a good place to be.

The Dell XPS 13 2-in-1 uses a USB-C socket to charge, and the adapter is tiny. That’s a bonus for travel use.

A complete lack of traditional USB ports is not, though, so you may need to pack an adapter. A simple USB-C (the ‘small port) to USB-A (the ‘big’ port) comes in the box. Actual on-board connections are minimal: there’s get a headphone jack, a microSD slot, and two USB-C ports – one of which will be used during charging. 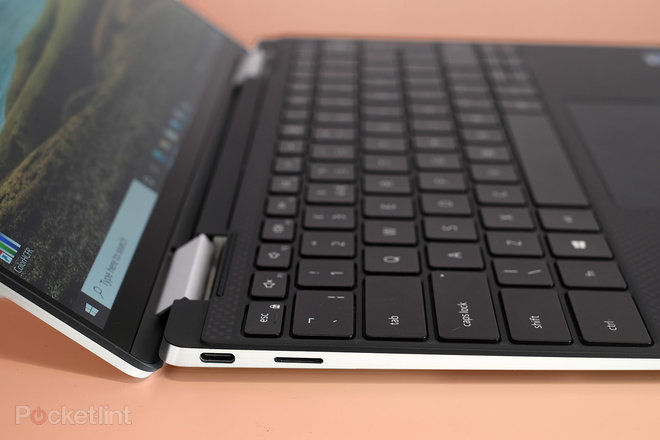 However, both of these USB ports are Thunderbolt 4, meaning they are very, very quick. Top specs aren’t too different from the older Thunderbolt 3, but you’re guaranteed to be able to plug in two 4K monitors. Handy for home use.

The Dell XPS 13 2-in-1 also has reasonably good speakers. Their tone is relatively even and they have a small serving of bass, essential for games and movies. We’re not at MacBook level, as the max volume isn’t that great and higher volumes can cause ugly-sounding vibrations inside the chassis, but they do their job well enough.