If you’re anything like me, when you’re thinking of buying a laptop, it’s important that it’s a convertible, also called a 2-in-1 laptop. Laptops that can be used as both a tablet and a standard laptop give you a lot more flexibility, and it’s great to be able to use it how you want when you want. Two prime examples of convertible laptops in 2022 are the HP Spectre x360 13.5 and the Dell XPS 13 2-in-1, so how do you choose between them? Well, we’re here to help.

First off, there’s a pretty obvious difference in form factor. One is a convertible with a 360-degree hinge, while the other is a tablet with an optional keyboard that turns it into a laptop. That alone could settle the dispute for you. But let’s take a closer look at what makes each of these laptops unique so you can choose what truly fits your needs the best.

At first glance, the internal specs of the Dell XPS 13 2-in-1 and the HP Spectre x360 13.5 are very similar, but there are actually some big differences. While they’re both packing 12th-generation Intel processors, the XPS 13 2-in-1 is using U9-series CPUs (with a 9W TDP), while the Spectre is using 15W models. They may have the same core counts and boost clock speeds, but the 15W processors should be able to perform at their peak for longer (provided adequate cooling, of course). For things like web browsing or writing up a document, you probably won’t feel a huge difference, but if you’re doing something more demanding, the 9W processors will definitely slow down a bit more.

Plus, while the CPU clocks are similar, the integrated Intel Iris Xe graphics are actually significantly different between the 9W and 15W processors. On the Intel Core i7-1250U, the integrated GPU can run at up to 950MHz, while the equivalent Core i7-1255U can boost up to 1.25GHz, meaning it’s over 30% faster. Neither of these is a gaming laptop, but the Spectre x360 can handle some light GPU workloads a bit better.

Conversely, having a higher TDP means more power is used, which in theory should mean the HP Spectre x360 will eat up its battery a bit more quickly. However, it also has a physically larger battery (66Whr) compared to the Dell XPS 13 2-in-1, which has a 49.5Whr battery inside. Until we have actual tests for these devices, it’s hard to say how they’ll compare, but in the past, 9W processors haven’t necessarily yielded much better results in terms of battery life compared to 15W models. Plus, there are other factors to consider, like the display. 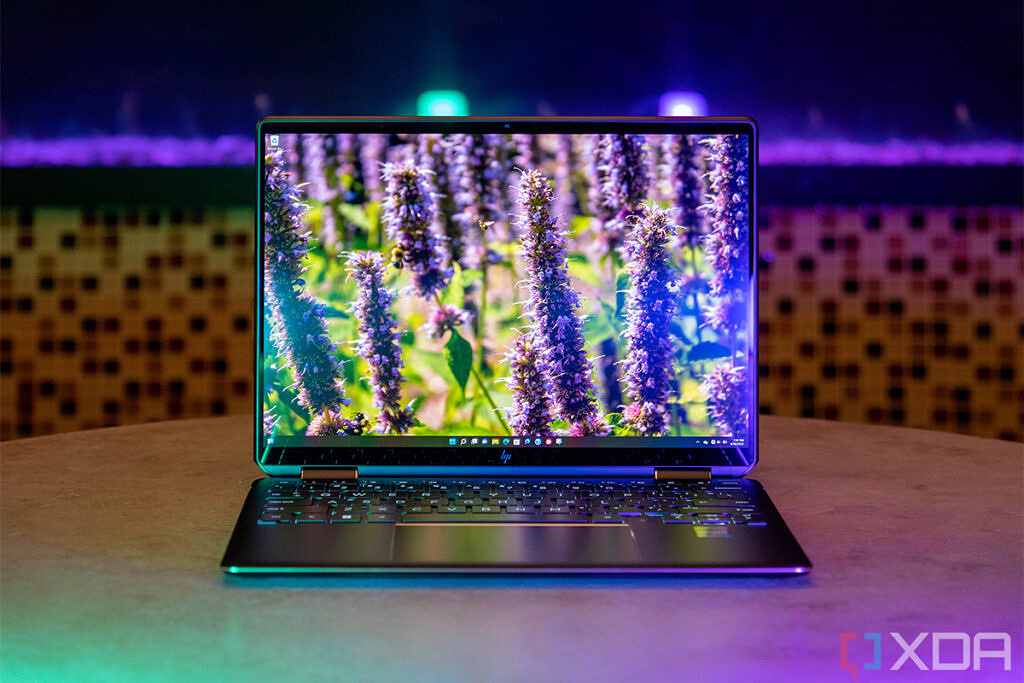 Finally, as far as RAM and storage go, the configurations favor HP’s laptop. It’s a much larger device, so it can go up to 32GB of RAM and 2TB of SSD storage, plus it has more storage in the base configuration (512GB) compared to the 256GB of the Dell XPS 13 2-in-1. RAM and storage max out at 16GB and 1TB, respectively, on the Dell XPS 13 2-in-1. Admittedly, it’s not exactly meant to handle the same kind of workloads, either.

Display and sound: The HP Spectre x360 gives you options

Moving on to the display, both of these devices are pretty good, but in the case of the HP Spectre x360, it does depend on the configuration you choose. It comes with a 13.5-inch panel, which has a 3:2 aspect ratio, something that’s mostly been made popular by Microsoft’s Surface devices. This taller screen is ideal for productivity, and the base model starts at Full HD+ (1920 x 1280) resolution, which is plenty sharp. You can add an HP Sure View Reflect privacy screen if you need to conceal sensitive information while working in public, or if you want the best viewing experience, you can upgrade to the 3K2K (3000 x 2000) OLED panel. In addition to being much sharper, this panel gives you the usual benefits of OLED, like true blacks and more vivid colors. 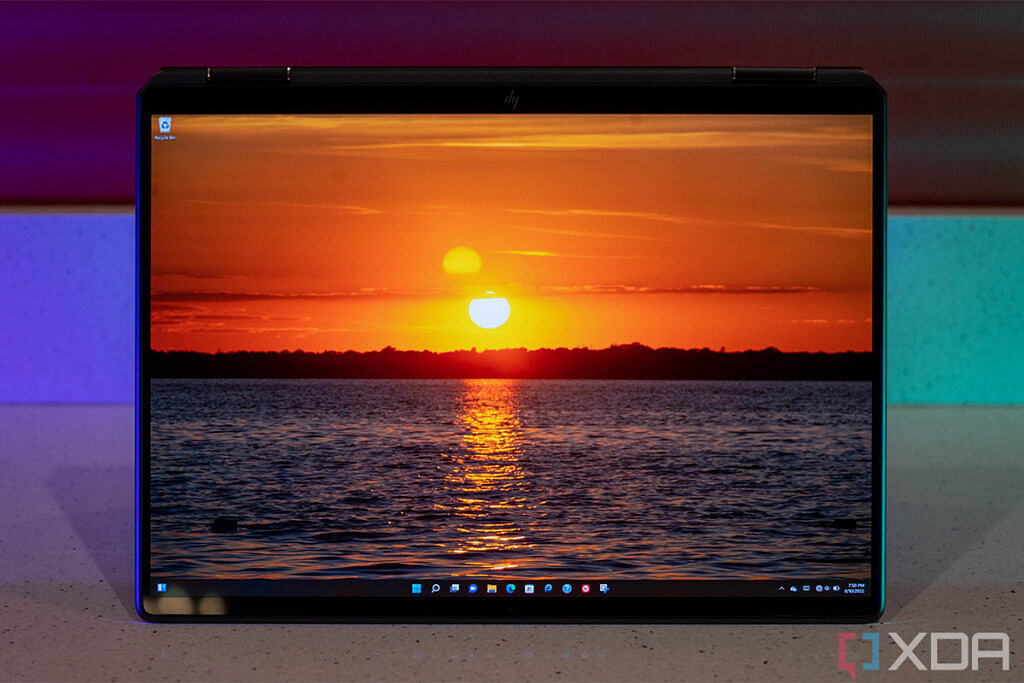 The Dell XPS 13 2-in-1, on the other hand, only has one configuration available, but to its credit, it’s a very good one. This is a 13-inch panel, also with a 3:2 aspect ratio, and in this case, it comes what Dell calls 3K resolution (2880 x 1920). This is essentially what you’d find on a Surface Pro X, and that’s not a bad thing at all – this is a very sharp screen for its size. It’s an IPS panel, so it won’t give you the same true blacks and contrast ratio of an OLED, but Dell has typically used very good IPS displays on its laptop, so the viewing experience here should be great. On the flip side, this panel being the default means it will probably use significantly more power, too, while the HP Spectre x360 gives you the option for a lower resolution if you want to prioritize battery life.

The larger chassis of the HP Spectre x360 13.5 also makes way for a more robust speaker system comprised of four speakers, which should result in pretty good media experience. Dell only managed to fit two speakers on the Dell XPS 13 2-in-1, though to be fair, they’re mounted on the sides, and thus, sound is aimed more closely at the user than with the bottom-firing speakers of the Spectre x360. 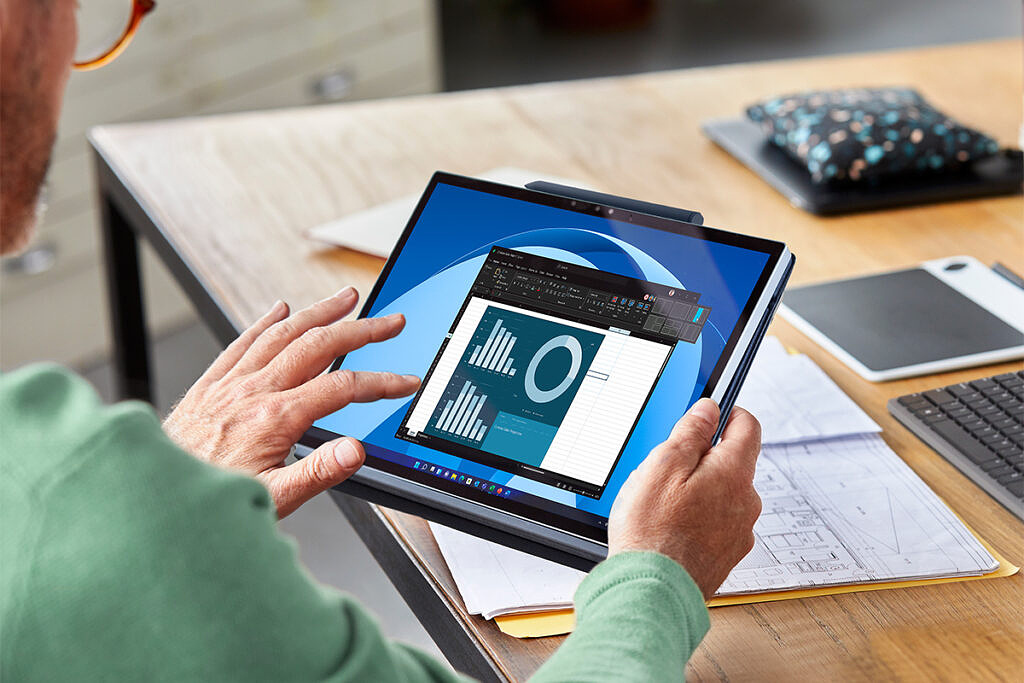 Finally, for the webcam, both laptops come with a 5MP front-facing camera, capable of recording 1080p video, and both support Windows Hello facial recognition. This is a big upgrade from the previous iterations of each model, and if you want to look your best during video calls, any of these will do great, though, by the nature of its form factor, the XPS 13 2-in-1 can’t be adjusted to every possible angle unless you hold it in your hand. However, the Dell XPS 13 2-in-1 has an advantage, and that’s a rear camera. Because it’s a tablet, you might want to use it to take pictures in a pinch, and Dell gives you an 11MP camera capable of recording 4K video, so you certainly have options for that.

Design: The Dell XPS 13 2-in-1 is more focused on portability

As we said at the start, while these are both 2-in-1 laptops in a sense, they’re very different approaches to them. The Dell XPS 13 2-in-1 focuses on portability more than ever, and that’s why you get this tablet form factor that’s only 7.4mm thin (7.8mm if you get the 5G model). It also weighs just 1.6lbs (up to 1.8lbs) so it’s very portable. However, it’s also just a tablet, and if you want a keyboard, you have to buy the XPS Folio separately, or opt for a third-party solution. The XPS Folio keyboard cover also adds 1.23lbs of weight, so this quickly becomes around the same weight as the Spectre x360. 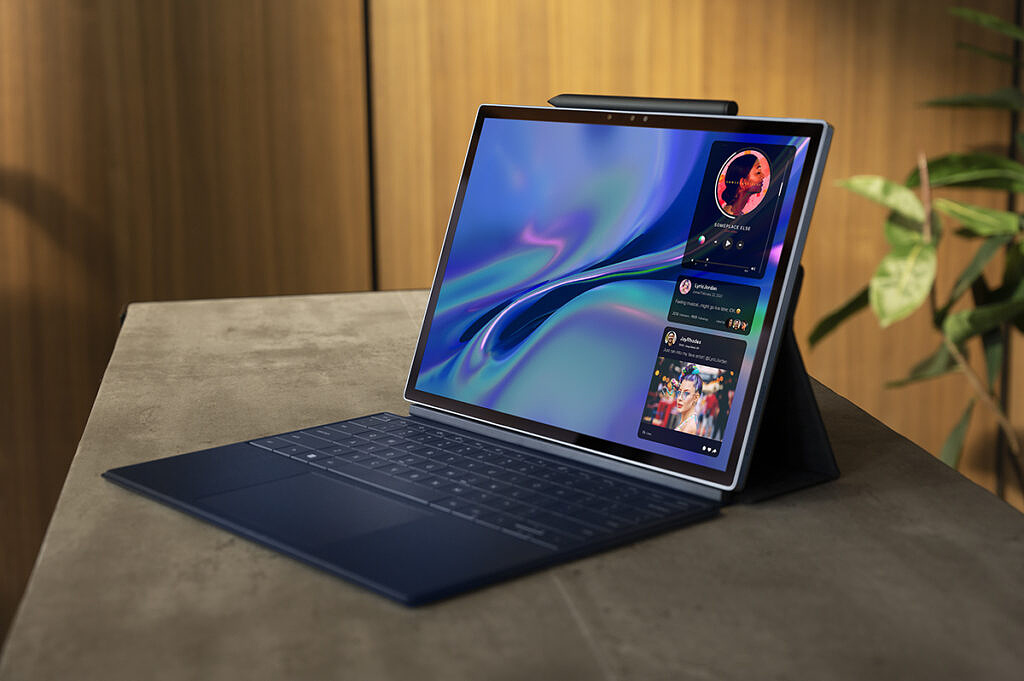 Most importantly, as a tablet, the Dell XPS 13 2-in-1 doesn’t have a kickstand. It relies on the XPS Folio cover for support, and even then you only get three angles you have your tablet at, so it’s not infinitely adjustable to your preferred position. As for looks, the Dell XPS 13 2-in-1 comes in either Sky (for the Wi-Fi model) or Slate (for the 5G version). These are both sleek and subdued color options, and they look pretty good.

As for the HP Spectre x360 13.5, it pretty much follows the same footsteps as its predecessors. It’s a convertible, but instead it uses a 360-degree hinge so you can rotate the display all around and use it as a tablet. That means by default, you always have a keyboard and touchpad available to you, and you also can adjust the angle of the display at any point you like for maximum comfort. 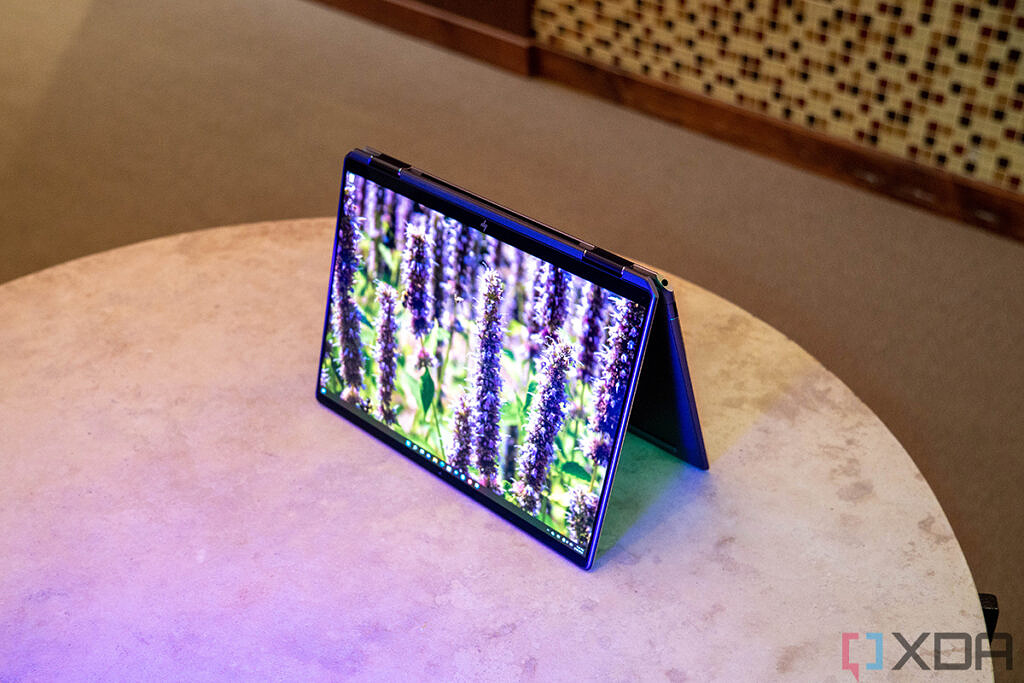 Of course, that comes at the cost of portability, with the Spectre x360 13.5 being 17mm thick and weighing 3.01 lbs out of the box. Still, you get a full-fledged computer right out the gate, which may justify the difference for you. This is also a beautiful laptop, with a striking dual-tone in either Nightfall Black or Nocturne Blue, as well as a more subdued Natural Silver option.

Ports and connectivity: Thinness comes at a cost

We talked above about how the Dell XPS 13 2-in-1 is all about portability, but having a device as thin as 7.4mm inevitably comes with sacrifices. The Dell XPS 13 2-in-1 has two Thunderbolt 4 ports – and only two Thunderbolt 4 ports. There’s no headphone jack, USB Type-A, or anything else built-in. Dell does ship a couple of adapters to give you these ports if you need them, but it’s not the most convenient solution.

On the other hand, the larger size of the HP Spectre x360 13.5 makes room for a more suitable setup. You also get two Thunderbolt 4 ports, but in addition to that, one USB Type-A port, a headphone jack, and a microSD card reader give you a few more options for peripherals or to move files around. These days, not everyone needs these ports, and Thunderbolt docks give you all the connectivity you could want, but if you want something that gives you options out of the box without any hassle, the Spectre x360 clearly comes out on top here.

In terms of wireless connectivity, the two laptops are similar, with support for Wi-Fi 6E and Bluetooth 5.2. Both laptops also have models with 5G support announced, but neither one of them is available yet.

Picking a laptop is a very personal choice, and it depends almost entirely on your needs and preferences. If you want portability above all else or you plan to use your device as a tablet more often than as a standard laptop, then the Dell XPS 13 2-in-1 may be the best choice for you. It’s much thinner, lighter (without the XPS Folio keyboard, at least), and it has a rear webcam, which might come in handy at times. Plus, by default, you get a much sharper and nicer screen (though you can pay for an even better option on the Spectre x360).

On the other hand, the HP Spectre x360 is better if you want more of a real laptop, with a standard keyboard and touchpad that are always available, and the flexibility that a 360-degree hinge can offer. Plus, it has more powerful specs, and, on the whole, it offers more options. You can choose a higher resolution display or one that will save more battery, or something that protects your privacy in public. 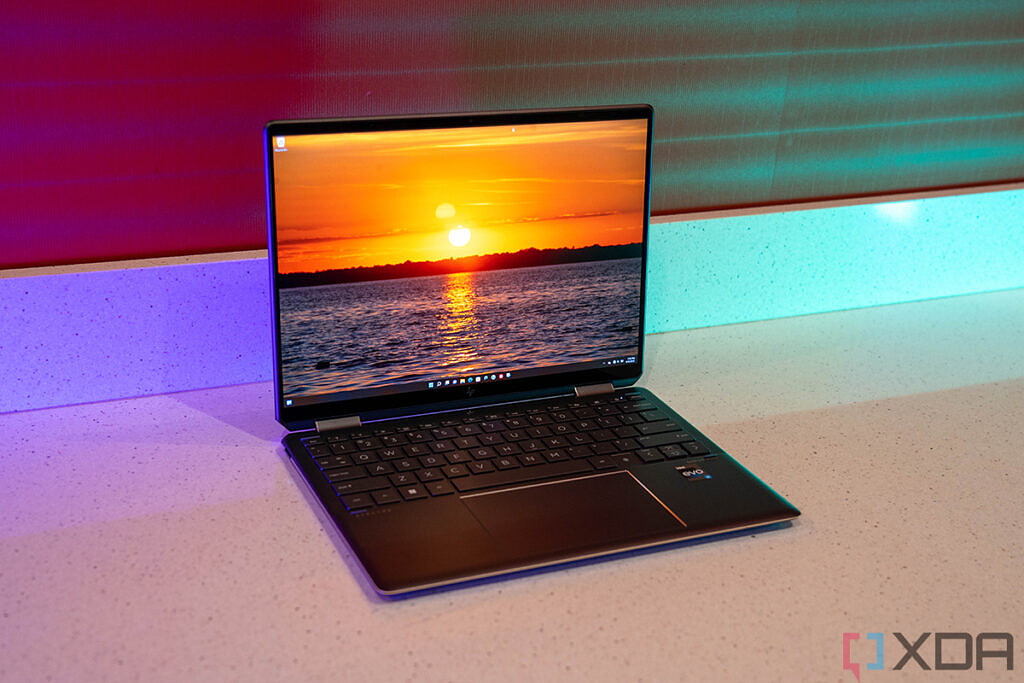 It does come at a cost, being a heavier laptop, but if you add the XPS Folio keyboard to the XPS 13 2-in-1, things are a lot more balanced. And the same can be said for price – the Spectre x360 costs $150 more in its base configuration, but it does include a keyboard, touchpad, and pen right out of the gate. The Dell XPS 13 2-in-1 forces you to buy those things separately if you want them.

Personally speaking, I’d rather have the HP Spectre x360 13.5, as it feels like a more versatile option, especially with the Dell XPS 13 2-in-1 not having a fully-adjustable kickstand. Plus, the faster processor inside the Spectre x360 would certainly be welcome. Regardless, it’s all a matter of preference. No matter which one you prefer, you can buy the Dell XPS 13 2-in-1 or the HP Spectre x360 13.5 using the links below. Otherwise, you can check out the best laptops you can buy today if you don’t think you need the convertible form factor. 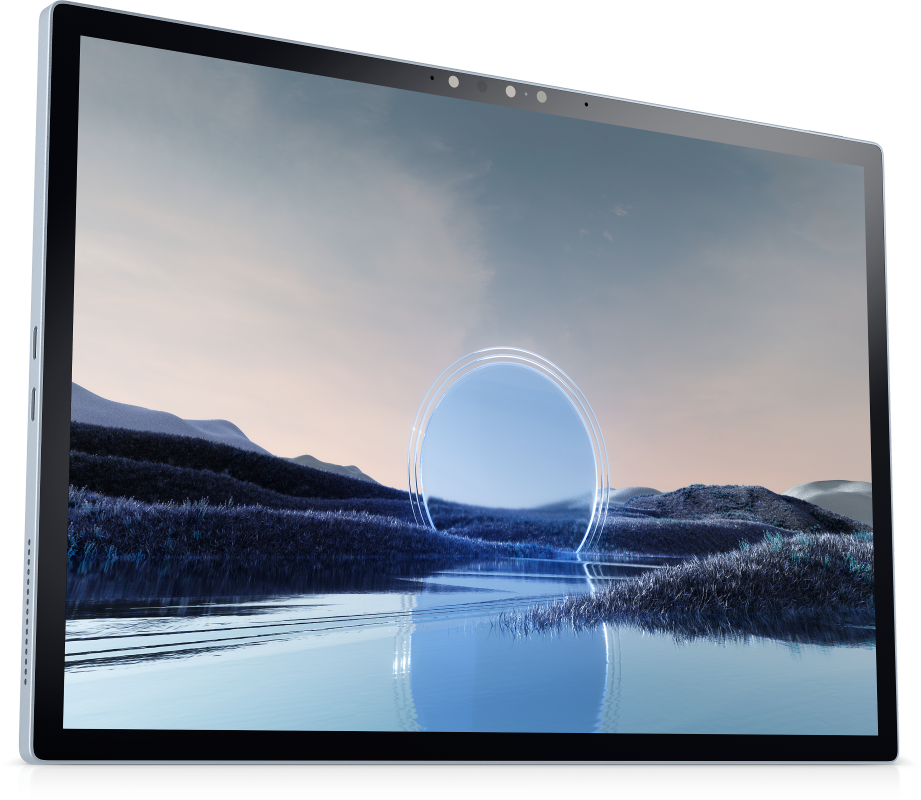 The Dell XPS 13 2-in-1 is a sleek tablet with 12th-gen Intel processors and a sharp 13-inch display. It can be paired with the XPS Folio keyboard for a more traditional laptop experience. 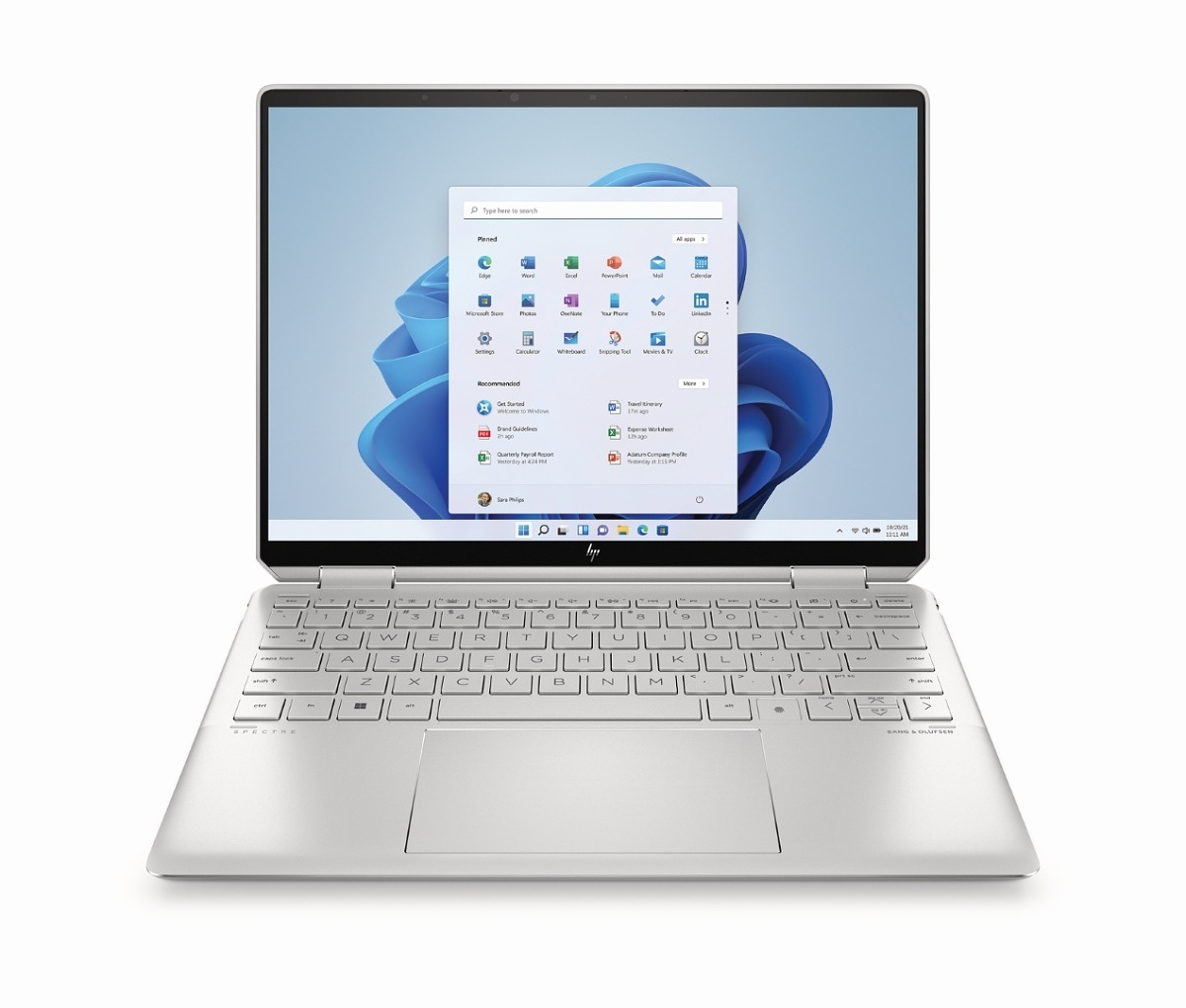 The HP Spectre x360 13.5 is a convertible laptop with a premium design that looks beautiful, plus it’s packing powerful specs and it has various configuraiton options.