Buying a new laptop can be an exciting time, but it can also be quite challenging. There are a ton of great laptops out on the market today, and each one of them excels at different things, so you have to look closely to find the right one for you. Among the best laptops for this year, we have the new Dell XPS 13 and the Lenovo ThinkPad X1 Carbon Gen 10, both of which are excellent. However, they’re quite different from each other, too.

First and foremost, they’re clearly geared towards different audiences. The Dell XPS 13 is a consumer laptop, but aimed more at the higher end of the market, while the ThinkPad X1 Carbon is Lenovo’s flagship business laptop. These differences in the target audience result in big differences in design and features, too, so let’s take a closer look in case you’re still on the fence.

The first thing you’ll probably notice looking at the spec sheet above is the sheer number of configuration options available for the Lenovo ThinkPad X1 Carbon compared to the Dell XPS 13, and that’s pretty typical for business laptops. You get a lot of options, but we should not that most of the 15W processors aren’t actually available yet, so we’re going to focus mostly on the 28W models. These processors make a big difference in terms of performance.

With the Lenovo ThinkPad X1 Carbon Gen 10, the CPU options go up to 14 cores and 20 threads, with boost speeds up to 4.8GHz, which gets you phenomenal performance for a relatively thin and light ultrabook like this. By comparison, the Dell XPS 13 comes with Intel’s U9 series processors, which have a default TDP of just 9W, though Dell has boosted them to 12W. These processors have 10 cores, 12 threads, and boost speeds up to 4.7GHz, but they also can’t run at full speed for as long. That makes a big difference in performance, and you can see an example of that below. Keep in mind this is just an example based on benchmarks, but you get an idea of how much faster P-series processors can be.

These differences in the TDP also have big implications on the GPU speeds. In the U9 series processors, according to Intel’s spec sheet, the Iris Xe graphics can only run at up to 950MHz, but on the P series, it can go up to 1.45GHz. That’s an over 50% advantage in clock speeds, and it’s probably going to have a significant impact on GPU-bound workloads. To be clear, neither of these is a gaming laptop, but if you want to do some light gaming, you’ll have a better time with the ThinkPad X1 Carbon.

But there’s another side to this coin, and that’s battery life. A higher TDP means that your laptop will chew through its battery much more quickly, and when that TDP is 28W, that’s quite a big leap from 12W, or even 15W. The Lenovo ThinkPad X1 Carbon has a slightly larger battery, but it’s not a big difference, and with this increased power consumption, you can definitely expect better battery life from the Dell XPS 13. The 15W models of the ThinkPad X1 Carbon will be a closer match, but they also won’t be that much faster. 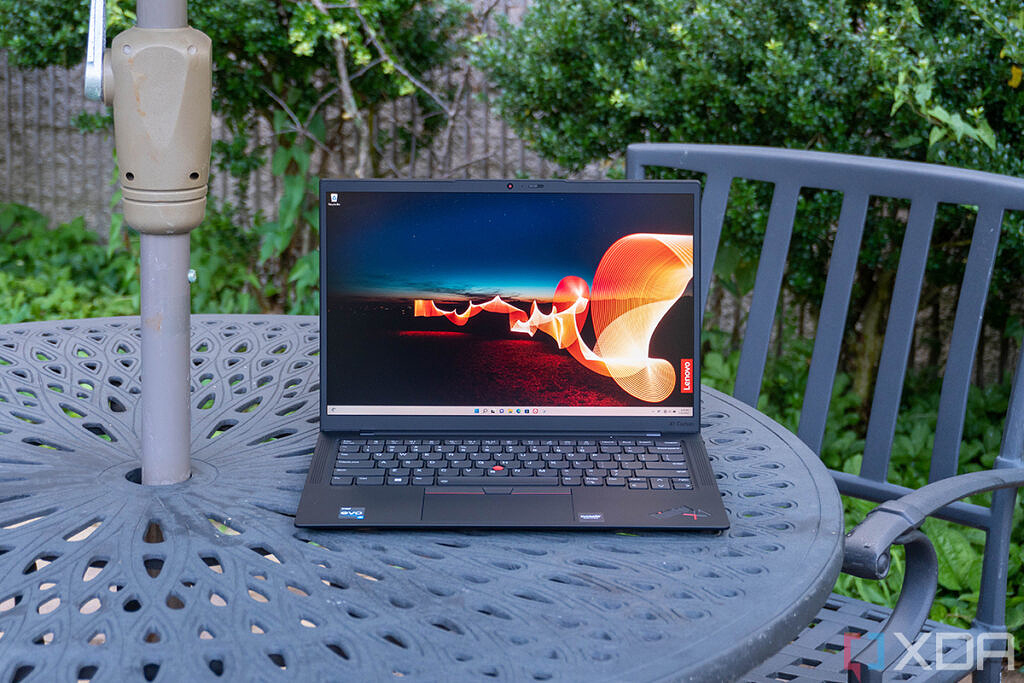 The last point to touch on is the RAM and storage, which isn’t too far off between the two laptops. Both can be configured with up to 32GB of LPDDR5 RAM, but the ThinkPad X1 Carbon can have a bigger 2TB SSD (versus 1TB), and that storage can be replaced if needed. On the Dell XPS 13, everything is soldered onto the motherboard.

Display and sound: The ThinkPad X1 Carbon gives you a ton of options

It’s fair to say that both of these laptops have great displays, but there are some significant differences between them. The Dell XPS 13 comes with a 13.4-inch display, as the name suggests, and it has a 16:10 aspect ratio, just like its predecessors. The base model comes in Full HD+ (1920 x 1200) resolution and it doesn’t support touch, but you can add a touchscreen or upgrade to an Ultra HD+ (3840 x 2400) panel option, which is incredibly sharp for this size and also supports touch by default. 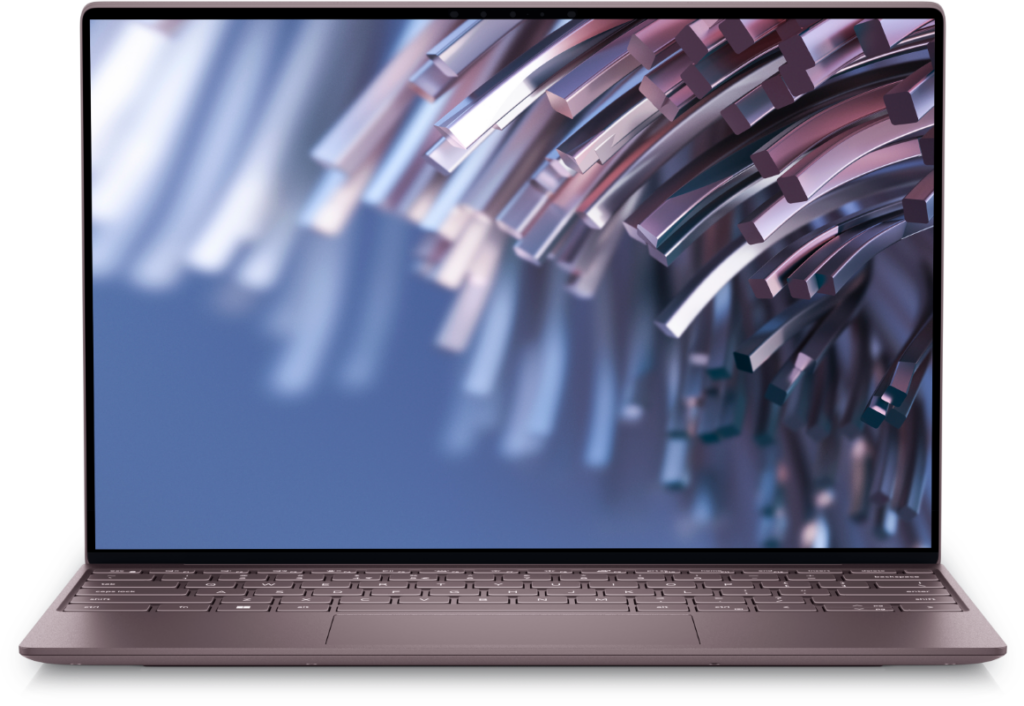 On the other hand, the Lenovo ThinkPad X1 Carbon Gen 10 comes with a 14-inch display, also with a 16:10 aspect ratio. The base model also has the same resolution and optional touch support, but from there, Lenovo offers a ton of options for all kinds of users. You can configure the laptop with a privacy screen that blocks other people’s view of what you’re working, upgrade to a 2.2K (2240 x 1400) IPS panel, or go for the higher-end options like the 2.8K (2880 x 1800) OLED panel or the Ultra HD+ (3840 x 2400) IPS display, which also has optional touch support. Lenovo really gives you the option to get the display you want, and some of these are really great. We’re especially fond of the 2.8K OLED panel, but you really have a lot of choices here. 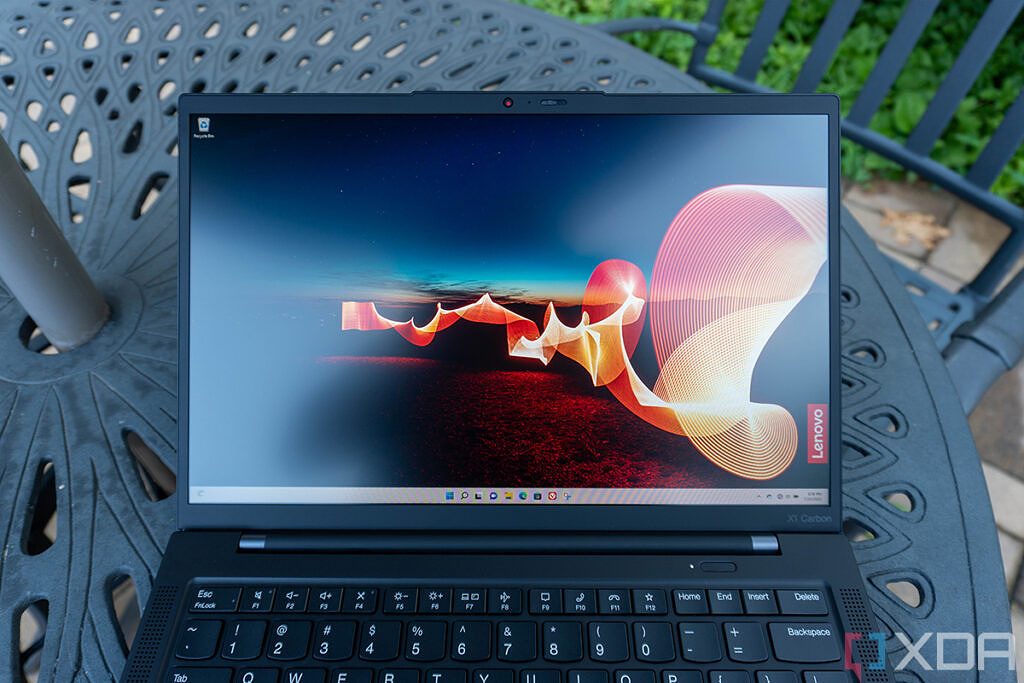 For audio, the Dell XPS 13 makes do with dual stereo speakers, facing downward under the laptop. Dell often has solid speakers, but the Lenovo ThinkPad X1 Carbon does have a quad-speaker setup, with two woofers and two tweeters, so you can probably expect a more immersive audio experience from that laptop. That’s the kind of thing you usually get with a larger laptop.

There’s another advantage for the ThinkPad X1 Carbon, and that’s the webcam. Officially, Lenovo says it starts with a 720p webcam, but really, all the configurations available have a 1080p camera, which should ensure you look that much better during video calls and online meetings. Plus, you can add Windows Hello facial recognition and Computer Vision if you want to, making it easier than ever to unlock and start using your laptop. Dell is sticking with the 720p webcams of the past, which is a bummer considering almost every premium laptop has moved on to 1080p webcams in 2022.

This topic is very subjective, but it’s also where the Dell XPS 13 shines the most. The Dell XPS lineup has always tried to be as compact as possible for the power it offers, and the latest iteration is no different. This is a tiny laptop, and it’s only 13.99mm thin, and despite having an all-aluminum chassis, it weighs just 2.59lbs. Plus, perhaps more importantly, the Dell XPS 13 is a beautiful laptop, coming in either Sky or Umber colors, which are subdued, but have just the right amount of personality to stand out from the sea of silver and black laptops that have flooded the market. 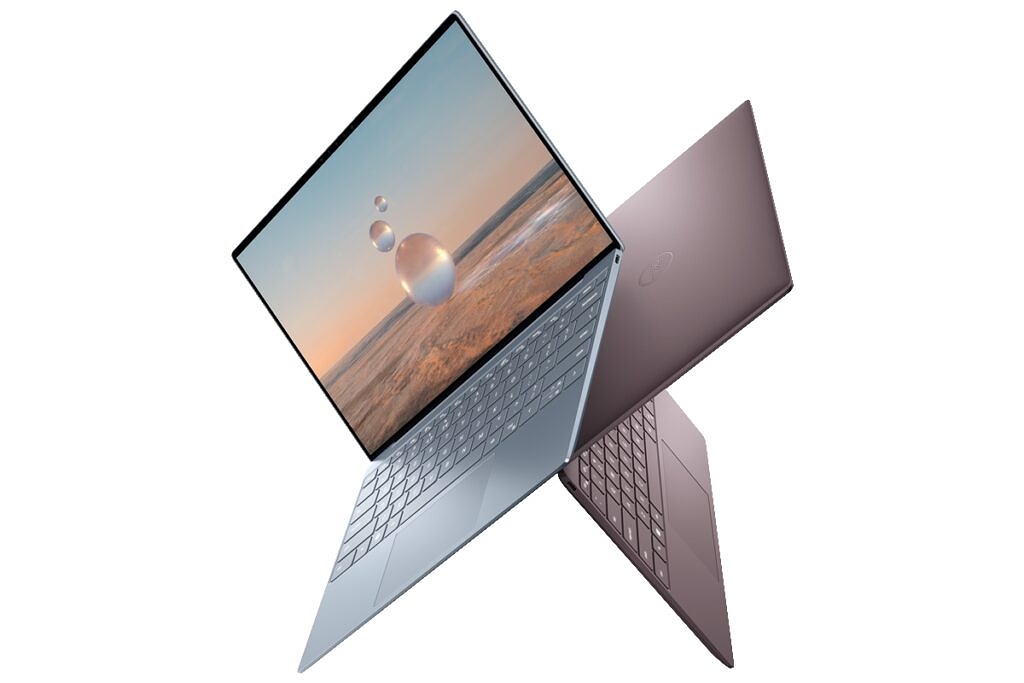 The Lenovo ThinkPad X1 Carbon Gen 10, on the other hand, is bigger in every dimension, thanks in big part to the larger 14-inch screen. It comes in at 15.36mm of thickness, which is still very slim. Despite its larger size, the ThinkPad X1 Carbon is actually a little lighter than the XPS 13, coming in at 2.48lbs for the base configuration. The reason for that is that the top of the laptop is made of carbon fiber instead of aluminum, allowing the laptop to be much lighter.

In terms of looks, the Lenovo ThinkPad X1 Carbon is as classic as it gets. Black surfaces, red accents, and things like the red trackpoint and the duplicate mouse buttons about the touchpad have all been signature elements of ThinkPad design for years, and that hasn’t changed, which you may like or dislike. Many would probably find this look a bit boring, but if you want something more unique, certain configurations have a carbon fiber weave pattern on the lid, which helps this laptop stand out. 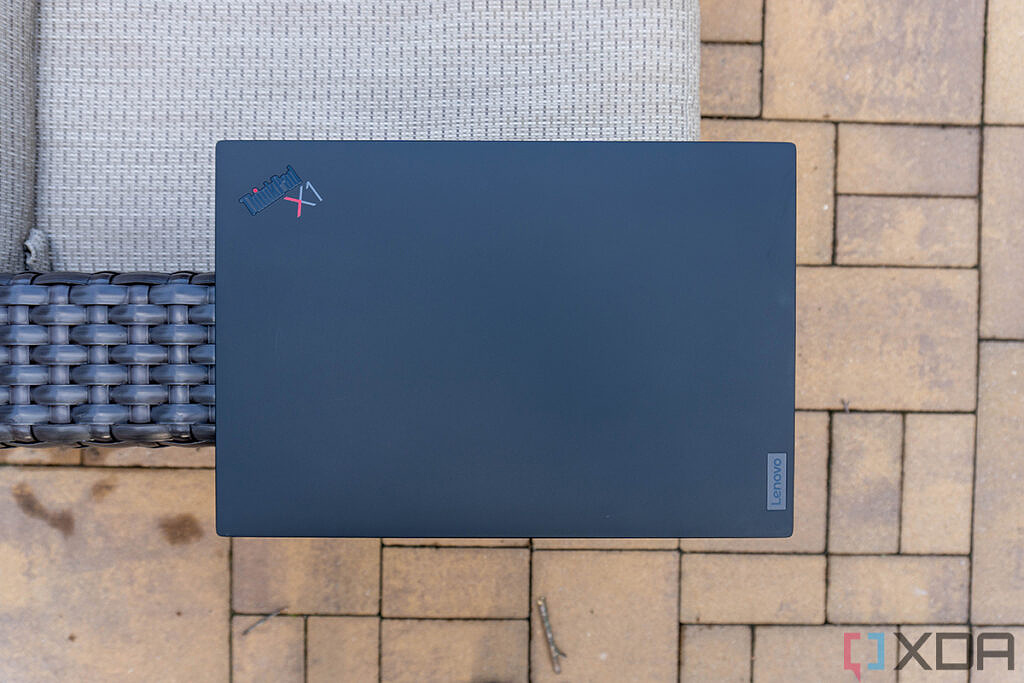 Ports and connectivity: The ThinkPad has a lot more to offer

It’s impossible to shrink down a laptop to be super compact without making some kind of sacrifice, and the Dell XPS 13 is proof of that. The latest iteration of the laptop cuts back on sorts even more than previous models, and now, all you get are two Thunderbolt 4 ports. Not even the headphone jack has survived, and that can be a big problem, depending on your needs. Dell does ship a couple of adapters with the laptop, so you can get a headphone jack and a USB Type-A port, but then you have to remember to carry those with you if you need them. 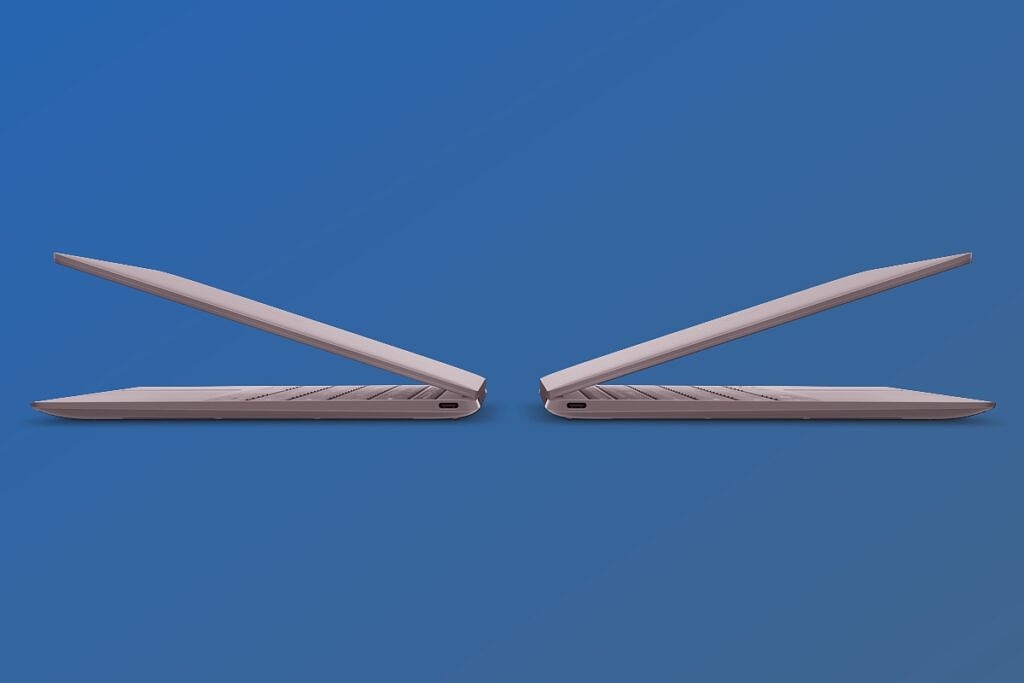 On the other hand, business laptops like the ThinkPad X1 Carbon are all about connectivity, and you get a ton of ports in comparison. Two Thunderbolt 4 ports, two USB Type-A ports, HDMI, and a headphone jack are all built into this laptop, so you can connect just about any peripheral you want without needing any adapters. Of course, because Thunderbolt support is still here, you can still use Thunderbolt docks if you prefer connecting peripherals that way.

Something else that business laptops tend to offer is cellular connectivity, and that’s no different with the ThinkPad X1 Carbon. You get the option to choose between 4G LTE or 5G depending on your needs and budget, and that will allow you to stay connected to the internet from just about anywhere you go without having to rely on Wi-Fi. Aside from that, both laptops support Wi-Fi 6E and Bluetooth 5.2 by default.

It should be apparent after we’ve looked at that the Dell XPS 13 and Lenovo ThinkPad X1 Carbon are meant for very different audiences and serve different purposes. The Dell XPS 13 is clearly geared towards mobile users. The low-power processors enable longer battery life, and the compact design make it very easy to take just about anywhere. Plus, it still has a great display and other high-end specs for solid performance in day-to-day tasks. Plus, it looks pretty modern and has its own identity, with two color options that deviate from the tired silver and black options we usually see.

On the other hand, the Lenovo ThinkPad X1 Carbon is clearly a business laptop, with the characteristics that usually define that category. You have a ton of configuration options for everything from the processor to the display, and those options are great. Intel P-series processors give you much better performance, though at the expense of battery life, and one of the display options you get is an OLED panel, which is always great to see. Plus, it has a ton more ports and the option for cellular connectivity. It’s a laptop meant for getting work done, and it’s still very light, so you can take it anywhere relatively easily, too. It does come with a design that’s probably not for everyone, though, so it really depends on what you’re looking for. 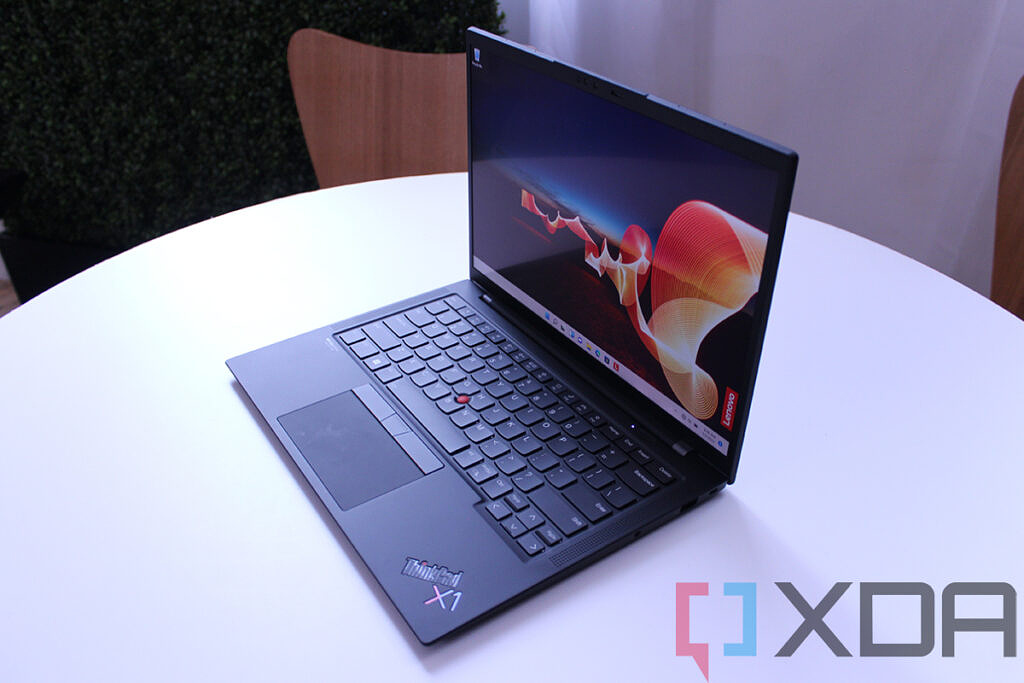 If you’ve made up your mind, you can buy either of these laptops using the links below. If you’re not convinced, you can always look at the best Dell laptops or the best ThinkPads to find something that might fit your taste a little bit better. 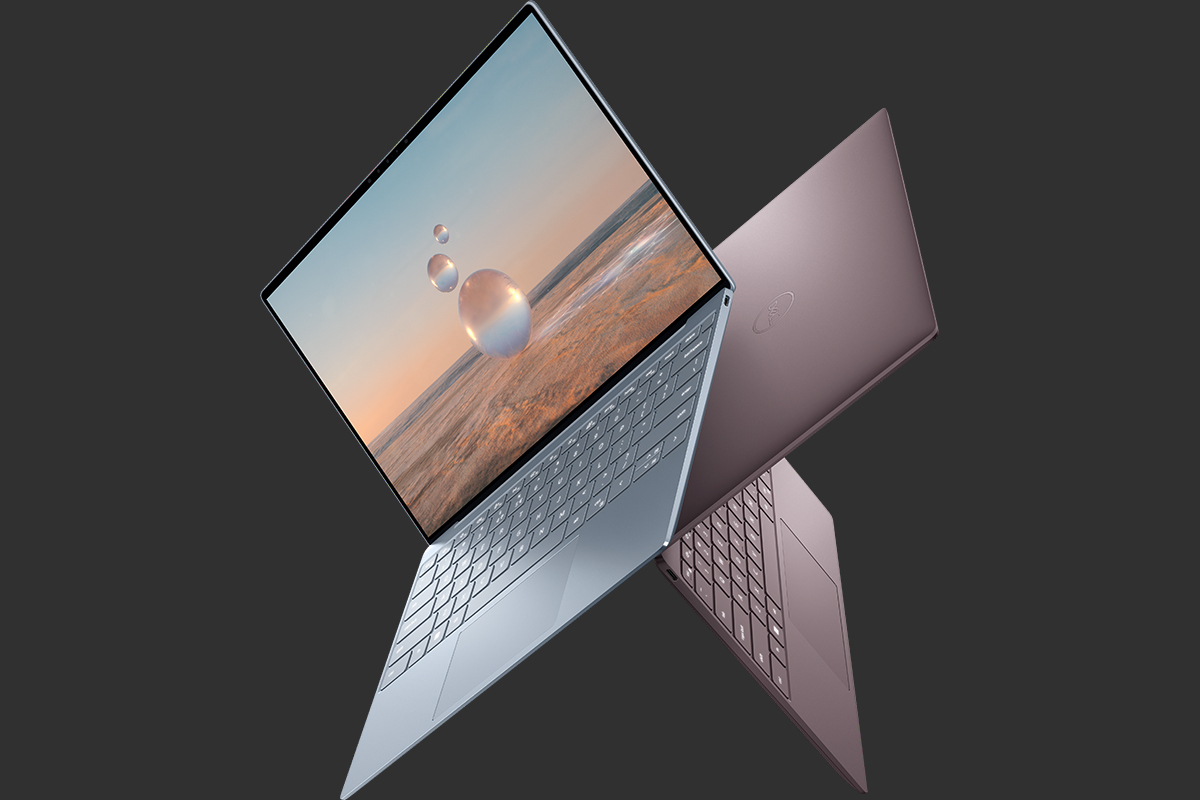 The new Dell XPS 13 comes with a complete redesign, coming in Sky and Umber colors. It’s also the thinnest and lightest XPS laptop ever. 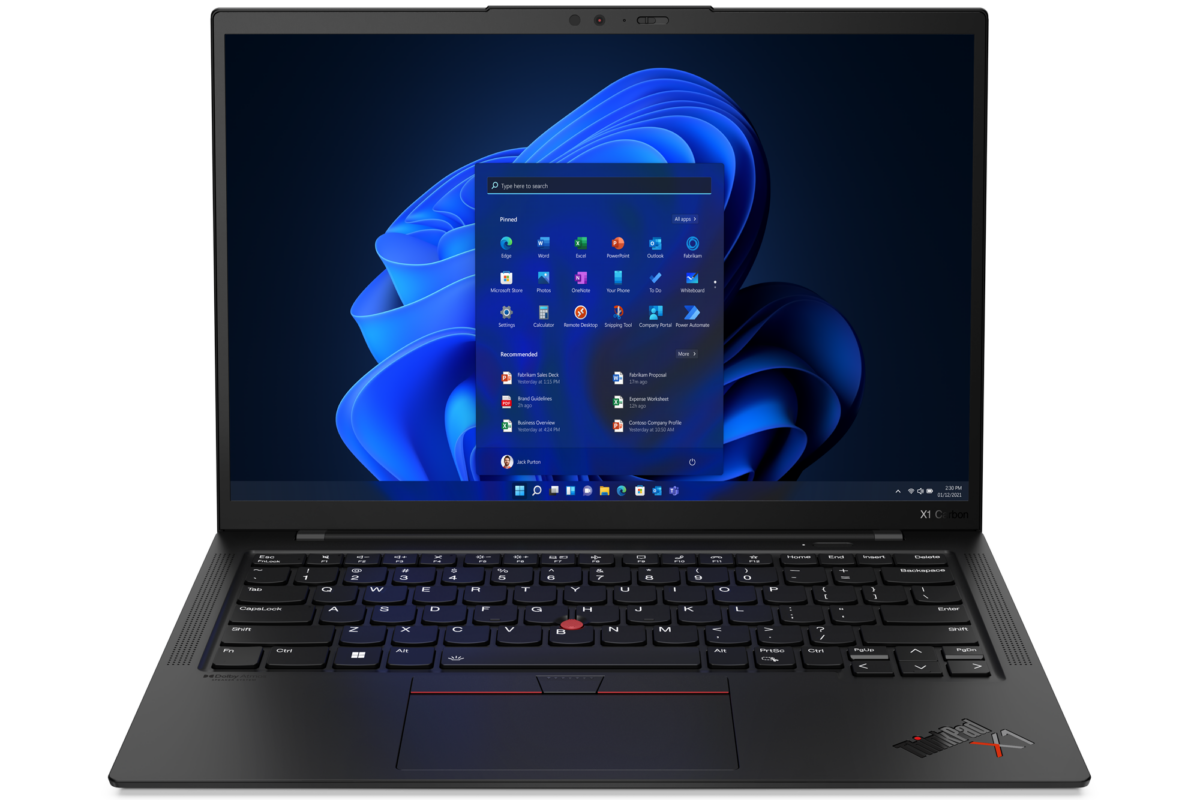