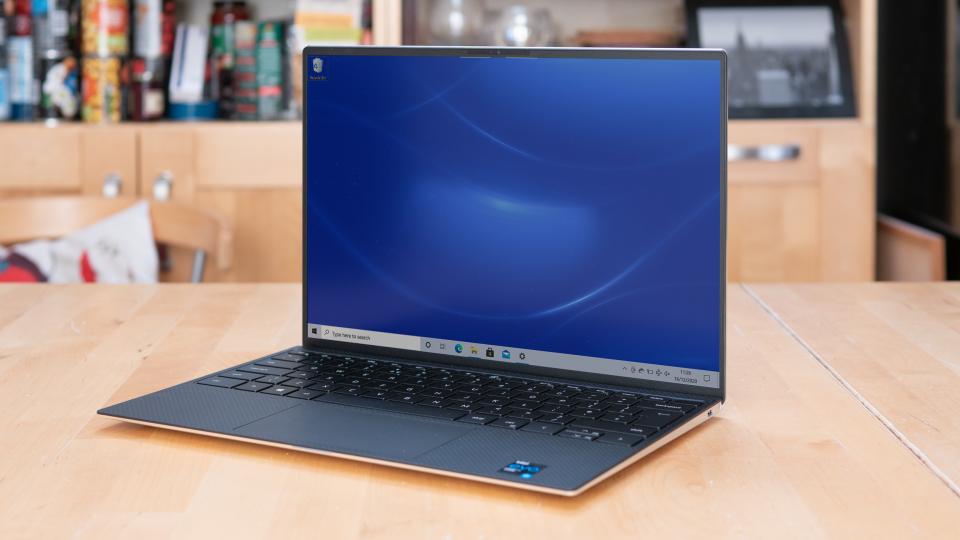 The Dell XPS 13 is a stalwart of the ultraportable laptop scene and has numbered among our favourite laptops for years now. Its secret is simple: it’s well-made, well-priced and there are plenty of different configuration options available to suit many different budgets.

The fact that Dell rarely makes dramatic changes to the design helps, too, as does the fact that it’s quick to update it whenever new Intel silicon comes along – this latest XPS 13 is a reflection of that success, housing the latest 11th gen Intel CPUs.

But what would otherwise have been a fairly unremarkable update has been cast in a more dramatic light by developments elsewhere. The successful debut of Apple’s first M1-based MacBooks makes this one of the most important updates to the venerable Dell XPS 13 yet.

It might be more significant than usual this year, but it isn’t a particularly exciting update, at least from a visual standpoint. The late 2020 XPS 13 is pretty much the same laptop as the one released earlier in the year. That’s not a bad thing, per se; it’s still as slim, sleek and well made, just as nice to look at and just as lovely to type on and use day in, day out.

All the changes are internal and these all focus on those new 11th gen Intel CPUs. With the latest Dell XPS 13 you have the option of three different configurations, two of which are fairly close in specification:

All of these models, as a matter of course, come with Intel’s new Iris Xe integrated graphics which, as you’ll see in the performance section below, is a huge step forward over Intel’s previous best effort, Iris Plus. 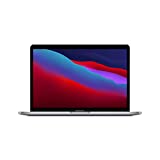 The M1 Apple MacBook Air costs £999, or £1,199 for the model with a 512GB SSD. With almost the same levels of performance as the Pro, the MacBook Air is a strong rival to the Dell XPS 13 but is significantly cheaper. 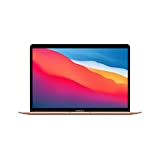 As for Windows alternatives, there are plenty to choose from, but none of our favourites – the Microsoft Surface Laptop 3, Samsung Galaxy Book Ion and the Huawei MateBook X Pro (2020) – have yet moved to 11th gen Intel silicon.

This is a pretty easy section to summarise because little has changed since the last major design update earlier in the year. The Dell XPS 13 remains one of the most attractive, well-built, usable and portable Windows laptops on the market. 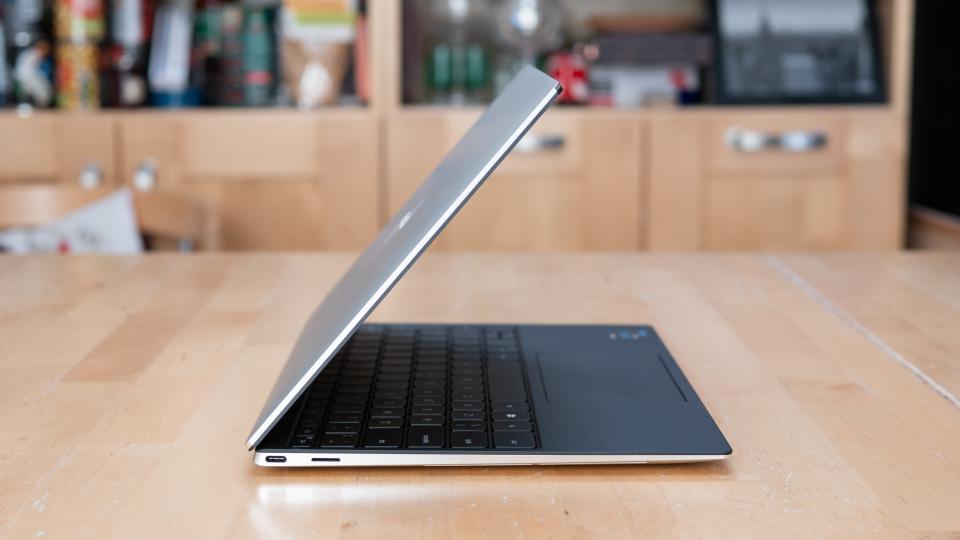 The lid and base are covered with unyielding, attractive silver aluminium and the interior is clad in soft-to-the-touch carbon fibre. It weighs very little, too, given how stiff the chassis is, and it’s just about as slim and compact as you could hope with very little bezel surrounding the 13.4in display.

For reference, the Dell XPS 13 beats both the M1 MacBook Pro and MacBook Air here on all counts, although not by a hugely significant margin.

The XPS 13’s keyboard is one of the best on any laptop I’ve used recently. It has a heavy feel to it and a German car-door thunk to the keystrokes that feels just right. The layout is mostly perfect, too, save for the fingerprint reader/power button in the top-right corner shunting the Delete key left from its usual position. 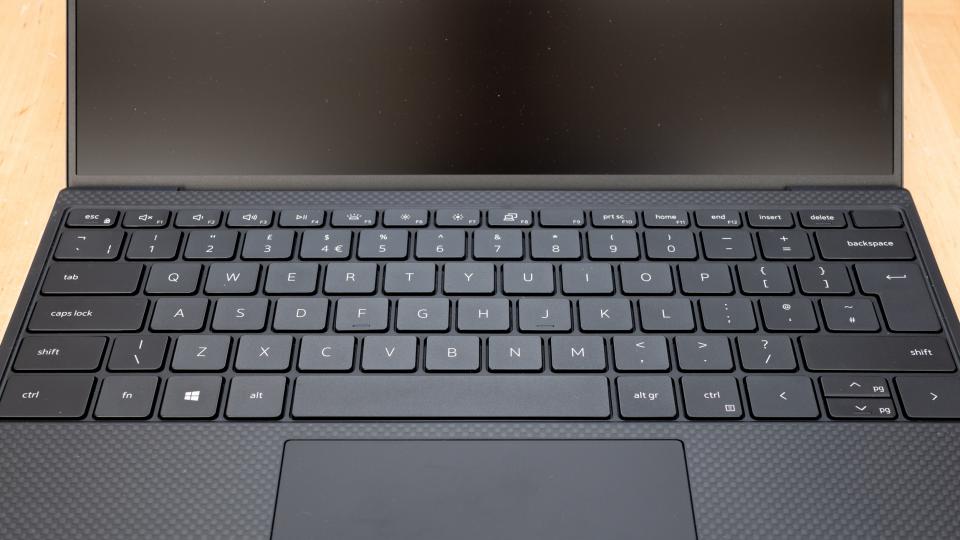 The touchpad, too, works superbly well, although if you’re a touch-surface aficionado, it’s the MacBook Air and Pro that should hold your attention here. The Dell XPS 13’s touchpad is merely a mechanical diving board affair and it feels a touch less luxurious to use as a result.

Other physical attributes match the previous Dell XPS 13. There’s a pair of Thunderbolt 4 USB-C ports, one on each side, plus a 3.5mm headset jack and a Kensington lock slot. As far as wireless connectivity goes, you’re getting 2×2 MIMO Wi-Fi 6, courtesy of the Killer Wi-fi 6 AX500-DBS adapter, and Bluetooth 5. As with the M1 MacBook Air and Pro, there are no cellular options.

Again, there has been no change on the display front. The unit supplied to me for this review has the same non-touch 1,920 x 1,200 display and its 16:10 aspect ratio adds that extra bit of squareness that makes it more pleasant to work with than 16:9 displays.

The screen reaches a peak brightness of 566cd/m2, which is good enough to be usable in most conditions, even if you like to do your work in the garden. It also has a contrast ratio of 1,849:1 and covers 97.7% of the sRGB colour space with excellent average colour accuracy. You’ll need to fire up the Intel Graphics Command Center and turn off all the various auto-contrast features if you want the best colour performance, however.

It can’t match P3 colour coverage of the M1 MacBook Pro and I do miss the ability to dab at links and tap buttons with my fingers due to the lack of touchscreen, but it’s more than good enough for 99% of what you’re going to want to do with it.

So far, so familiar. The only unknown quantity about this late 2020 Dell XPS 13 is the 11th Gen Intel Silicon CPU under the hood. In this instance, I’m testing the middle model which uses a Core i7-1165G7 CPU and is backed up by 16GB of RAM.

This is a quad-core, 10nm CPU, which with Hyper-Threading supports up to eight execution threads. It has a maximum turbo frequency of 4.7GHz, which is only 0.1GHz down on the Core i7-1185G7 inside the pricier XPS 13. It also uses Intel’s latest Iris Xe graphics to deal with the visuals. 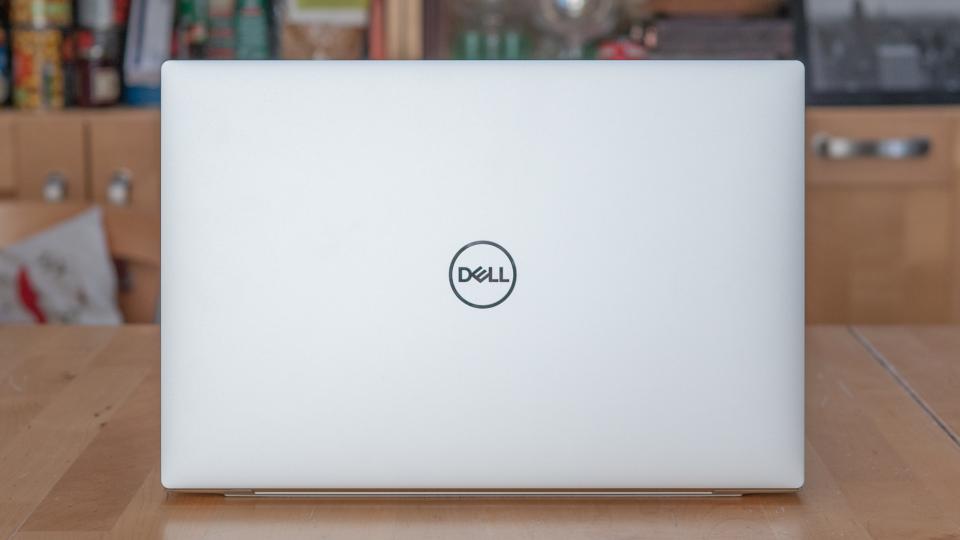 The first thing to note is that this machine is a notable improvement on all fronts over the 10th gen XPS 13 I tested earlier this year. You can clearly see this in all of the benchmarking graphs. That laptop was underpinned by the Core i7-1065G7, the equivalent to the Core i7-1165G7 in our review laptop, so the scores are directly comparable. 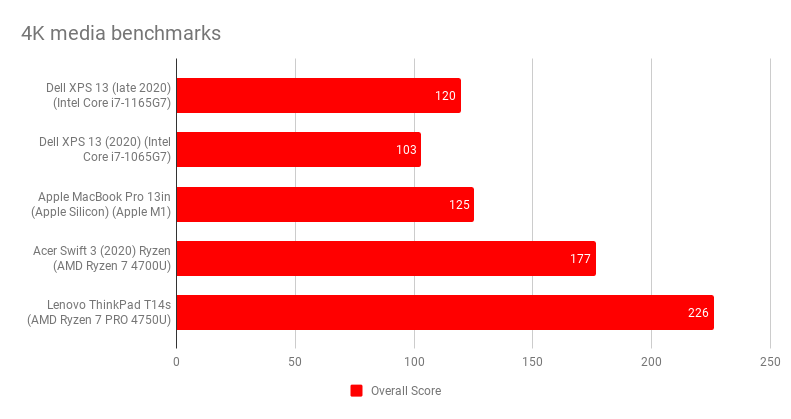 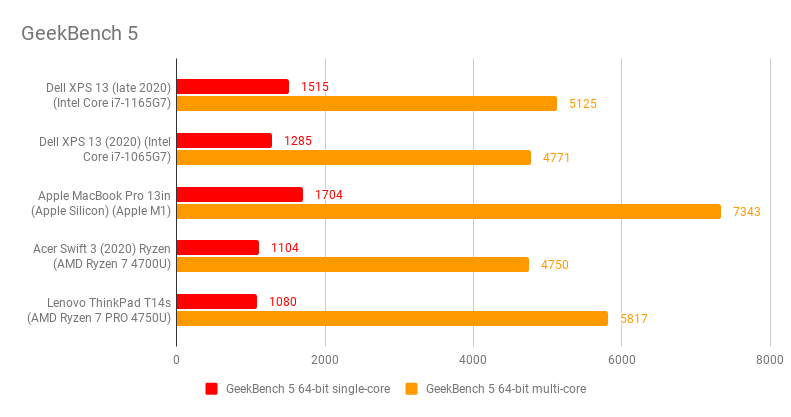 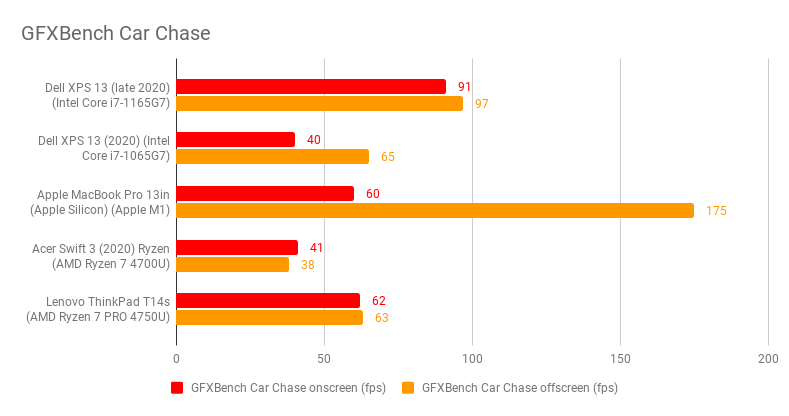 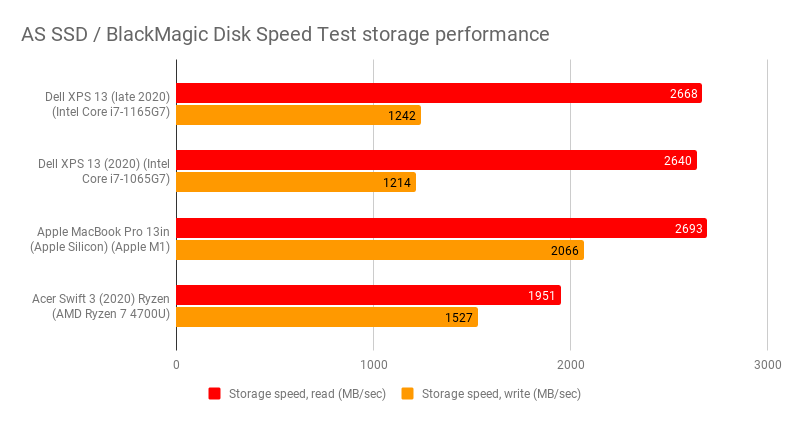 As for figures, the new model is 17% faster in our in-house media-centric benchmarks and in the Geekbench 5 CPU tests, the improvement is 18% for single-core and 7% for multi-core operations. Intel’s Iris Xe Graphics put in an even more impressive showing. In the GFXBench OpenGL graphics tests it was 49% better than the Intel Iris Plus graphics in the previous generation XPS 13.

It’s not even all that far off the much-lauded M1 Apple MacBook Pro 13in. Although Geekbench 5 reveals a significant disadvantage in multi-core processing, the 11th gen Intel chip isn’t far off in single-core, lagging by a mere 11%. Graphics performance takes a bigger hit, however, with a frame rate around half as good at 1080p resolution. Our in-house benchmarks show an even closer performance but it’s worth bearing in mind that the M1 Apple MacBook Pro was running this benchmark under emulation.

The one fly in the ointment, perhaps, is performance in relation to AMD Ryzen 4000-series laptops, with both the Acer Swift 3 (Ryzen 7 4700U) and the Lenovo ThinkPad T14s (Ryzen 7 4750U) significantly outperforming the Dell XPS 13 in our in-house benchmarks. It is worth noting, however, that performance is closer in Geekbench 5, particularly single-core performance where the 11th gen Intel chip excels, and the GFXBench graphics tests, where it stretches out a lead.

Perhaps at least as significant as all that is that battery life has also improved over the previous generation of XPS 13, up from just shy of 11 hours to nearly 12 hours in our video rundown test this time around. Again, this is nowhere near as impressive as the marathon 17hrs 31mins achieved by the M1 MacBook Pro 13in, but it is a noteworthy step forwards nonetheless. 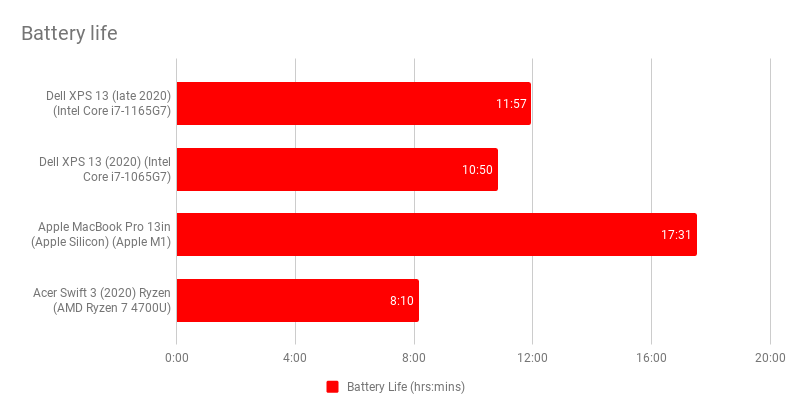 The Dell XPS 13 has been put in the shade recently by Apple’s latest M1 machines, which offer faster performance and superior battery life for less money.

But it’s not all bad news for Windows 10 fans and Intel is fighting back. Its 11th gen silicon is showing signs of progress and, as a result, the new Dell XPS 13 is a good notch better than its predecessor.

That doesn’t change my overall takeaway that if you don’t mind which platform you operate on then you should switch to one of the new MacBooks. However, if you need to run Windows, the new Dell XPS 13 is a superb laptop on which to do so.