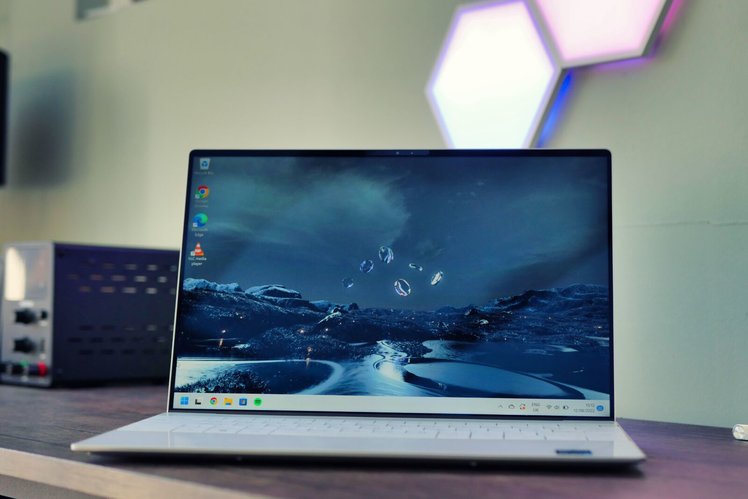 The Dell XPS 13 has been the gold-standard Windows ultrabook for many years now. Dell could have easily just whacked the latest processors in the old chassis, and likely wouldn’t have seen many complaints.

Instead, the brand chose to introduce the XPS 13 Plus, a striking re-imagination of what the perfect ultrabook should look like. It’s such a radical change, in fact, that Dell has decided to keep the old model as a separate option for those who aren’t quite so convinced.

We were excited to put the new model to the test and find out what life is like with an invisible trackpad, barely any ports and some serious horsepower. Here’s how we got on.

The first thing you’ll notice about the XPS 13 Plus is the lack of a trackpad. It is there, in the usual spot, but there are no markings to indicate where it begins and ends, just a seamless glass panel. 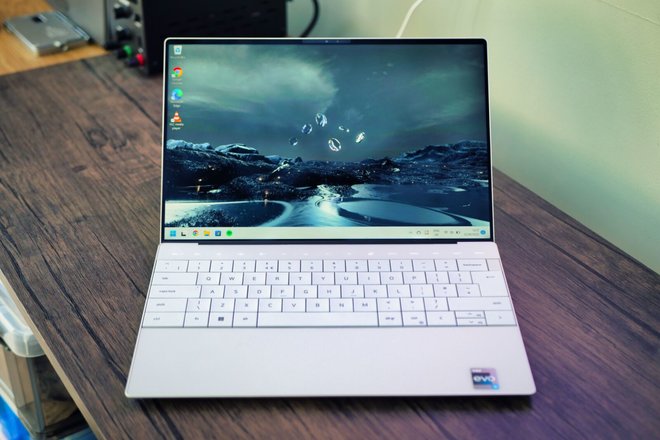 We were worried that we’d find ourselves drifting off of the trackpad, but that never happened. In use, it feels perfectly natural – like any other laptop, really. It’s large enough and normally positioned, so after the first few minutes, you don’t even need to think about it.

Another interesting aspect of the trackpad is that it doesn’t click in a conventional way. Instead, there are haptic feedback motors underneath that simulate the feeling of a click, very convincingly. For the most part, this works well, although clicking and dragging to highlight text takes some getting used to.

Part of the reason for this futuristic design choice is that the XPS 13 Plus needs as much room as possible to keep its beefy processor cool. The haptic trackpad takes less room than a conventional one, and this is the reasoning behind the capacitive touch function row, too. 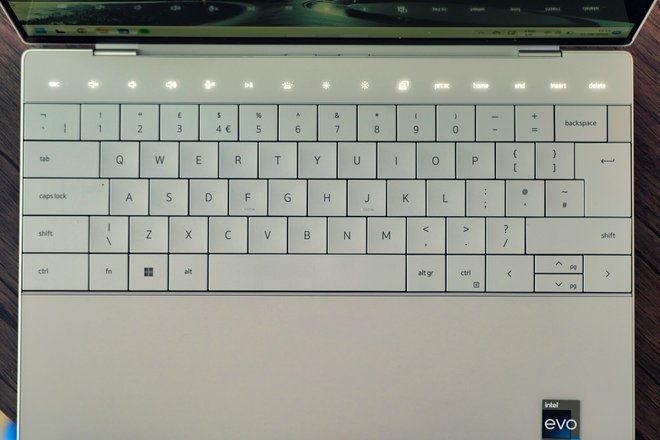 In practice, the touch row works pretty effectively, and you can tap the Fn key to toggle between the function keys and other handy controls for things like screen brightness, volume and muting your microphone.

We struggled to get used to the delete and escape keys being capacitive touch, though. Particularly when you need to enter a shortcut like “ctrl + alt + delete”, that feels very unnatural. Perhaps some haptic feedback in this area would improve things. 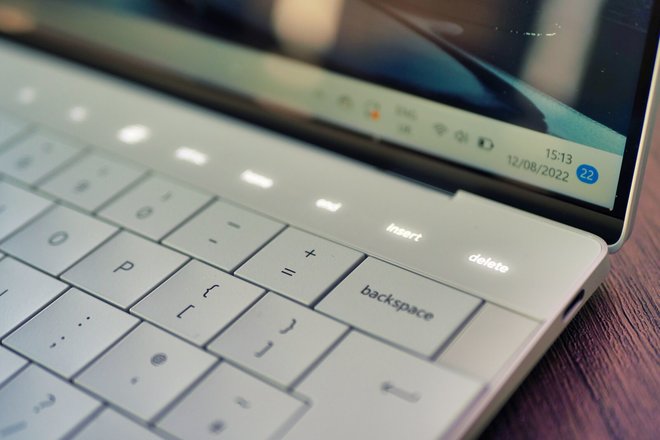 Another standout design choice is the keyboard, which has minimal spacing between its large keys and extends the entire width of the laptop. Not only does it look great, but it’s pretty great to type on, too.

It took us a moment to get used to the slightly oversized keys, but once we did we were easily able to touch type. There’s fantastic rigidity to the keyboard, which is impressive when compared to the flex of our Surface Laptop 4, but the key-travel distance feels a bit more natural on Microsoft’s offering.

There’s one last bold design choice to talk about, which we believe was also made in the name of cooling space, and that’s the lack of ports. The XPS 13 Plus only has two USB Type-C ports, both of which are Thunderbolt 4 capable. 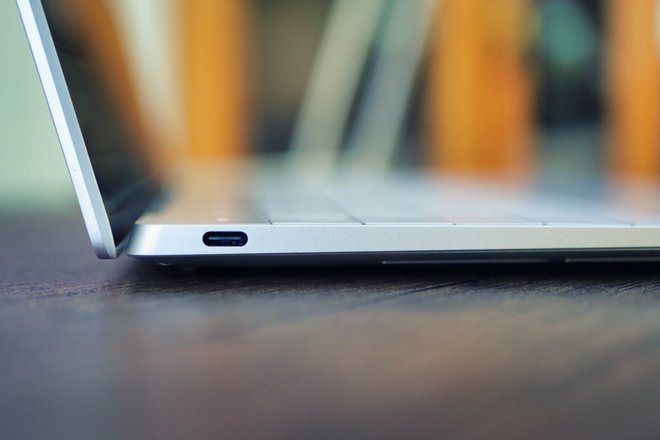 This lack of connectivity makes even the MacBook Air look generous, with its 3.5mm headphone socket and MagSafe power adapter. For the XPS, you’ll essentially need to carry a dongle at all times if you’re getting any serious work done. However, it’s worth noting that USB-C to A and USB-C to 3.5mm adapters are included in the box.

The XPS 13 Plus can be configured with either IPS or OLED panels, with resolutions ranging from FHD+ to UHD+. Our review unit features an OLED screen with a 3.5K resolution. 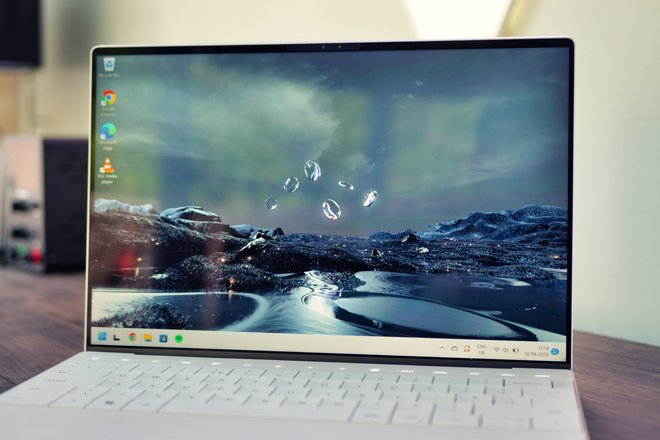 The display is vibrant, fairly bright and provides all of the inky black contrast that you’d expect from a high-end OLED panel. The usual razor-thin XPS bezels are present here, too, giving the device an exceptionally sleek and modern look.

Watching HDR content was particularly impressive on this display, though you do have to fiddle with some Windows settings to get it working while on battery power. It proved worth the effort, displaying an incredibly lifelike image with dazzling highlights.

The onboard speakers can perform better than a lot of laptops that we’ve tested and, if you need them to, they can get very loud. There’s a definite lack of low end, but the detail is nice and there is some decent separation between the left and right channels. 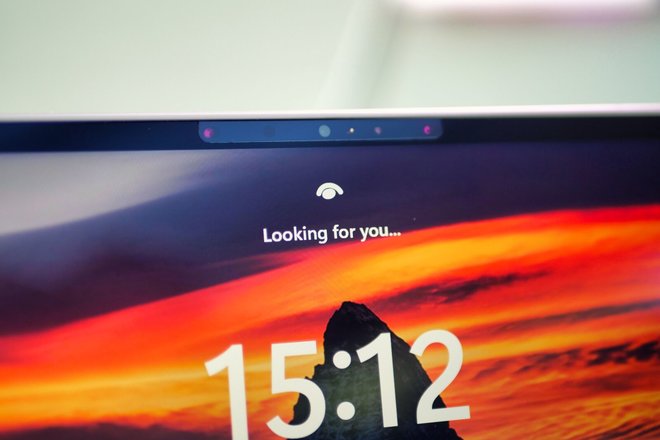 There’s a 720P webcam nestled in the tiny bezel at the top of the display, and given its size, it performs very well indeed.

It’s not the highest resolution, but the quality is there and colour reproduction is good. Windows Hello support makes it super-quick to sign in and is also handy when making online payments, we were happy to see it included.

The star of the show here is the monstrous 28W 12th Gen Intel processor, with 12 cores and 16 threads. It’s quite the feat getting this thing to run in such a thin and compact chassis.

That said, it’s quickly apparent that there’s a lot of horsepower under the hood as the laptop heats up quite quickly. You’ll definitely need to be careful if you’re wearing shorts. 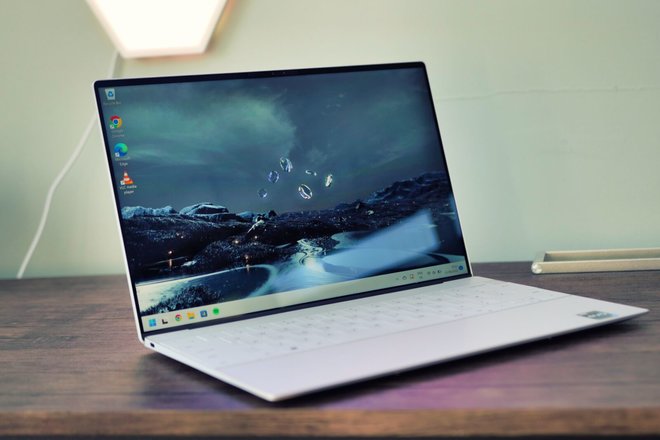 In a normal day’s work, the XPS 13 Plus breezed through everything we threw at it. From endless Chrome tabs to Photoshop image editing and piecing together 4K video files in Premiere.

It’s not a gaming machine, nor is it advertised as such, but we couldn’t resist trying out a few titles. We found that it’ll handle GTA V at 1080p, providing a playable, if underwhelming, 30fps framerate. CSGO, on the other hand, it handled very well, giving us 150+ fps at 1080p, low settings.

For us, the biggest pain point was the battery life. We could maybe squeeze 7 hours out of a charge, if we were careful, but more often experienced 5-6 hours of battery life. Coming from a Ryzen powered Surface Laptop 4, which frequently gives us 12 hours or more, it was quite a shock to the system. 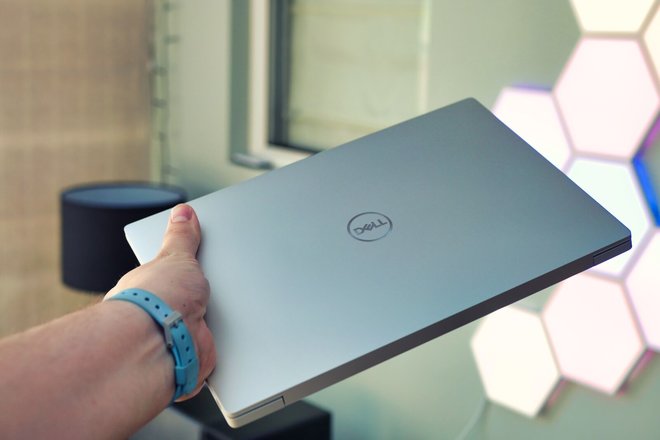 This is apparently mainly due to the high-resolution OLED screen, lovely though it may be, so if battery life is a concern, it’s probably worth considering the FHD+ IPS model instead.

The laptop charges via USB-C, which unfortunately takes up one of the device’s two ports, leaving you with a single port for your accessories. The plus side is that there’s an abundance of third-party options if you’re ever without your charger. Plus you can use the laptop charger to juice up your phone.