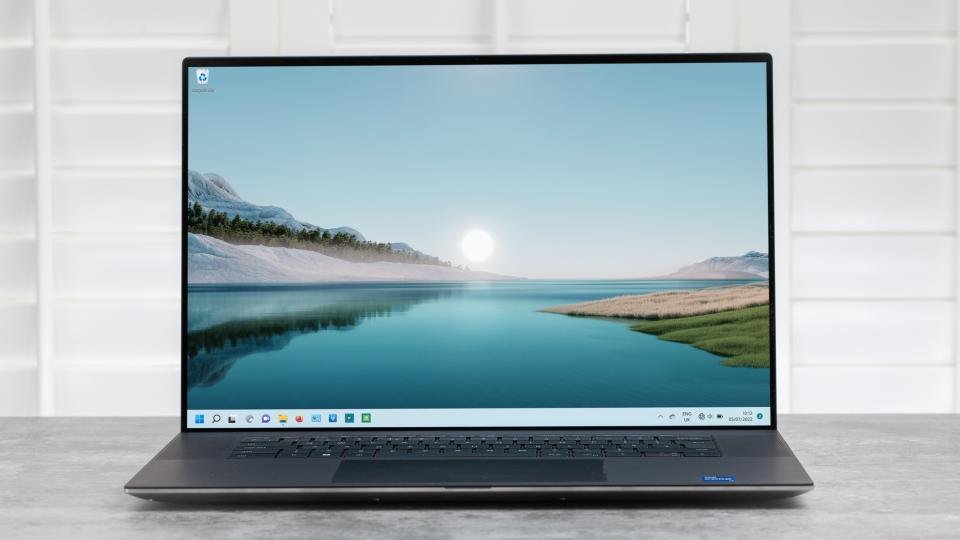 With a 17in UHD+ screen, Nvidia graphics and new Intel processors the XPS 17 is a quality slimline workstation

Space, they say, is truly the greatest luxury. It’s hard to disagree when you look at a 17in laptop display like the one on the Dell XPS 17. Suddenly, you wonder how you ever managed to work with a cramped 15in screen, let alone a tiny 14in or 13in affair.

Of course, this feeling is usually offset by the size and weight of most large screen machines. That’s partly why laptops with 16.1in displays like Dell’s Inspiron Plus are becoming more popular, but for its flagship XPS model Dell still wants you to have it all: a 17in screen in a machine barely any larger or heavier than the average 15.6in laptop.

Dell XPS 17 review: What you need to know

The 2022 XPS 17 is more of a refresh than a redesign with the most significant update being the introduction of Intel’s latest 12th generation Alder Lake Core-i7 and Core-i9 processors. These 14-core components are a huge leap forward from their 11th generation forebears with upwards of 25% performance improvements and support for DDR5 memory. The XPS 17 also comes with dedicated Nvidia GPUs, but not the latest Ti models so you have to choose between the RTX 3050 and RTX 3060 models, both with low 60W TGPs. 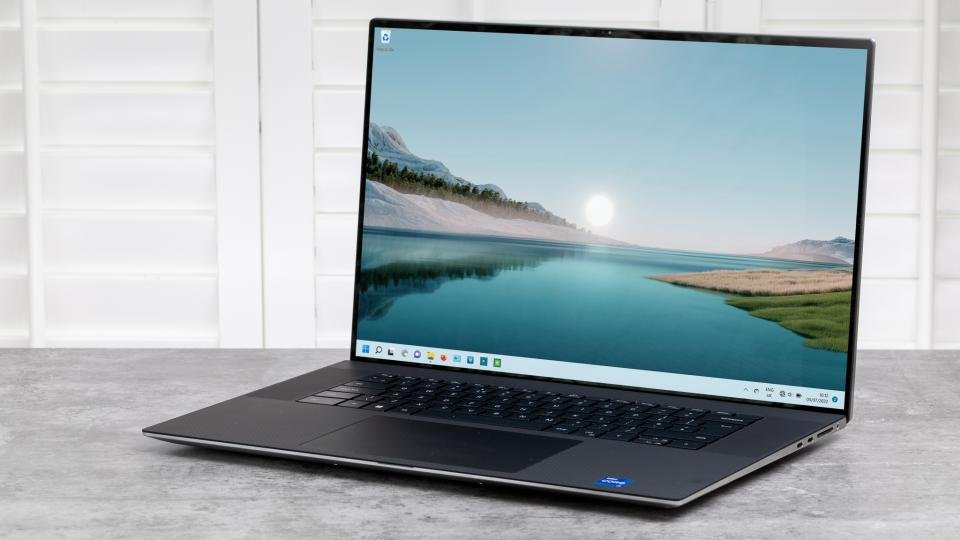 Beyond that, the XPS 17 is very much as it was but that’s not necessarily a bad thing as the XPS range has long been regarded as one of the most stylish and well-made notebook lineups on the market, boasting solid aluminium bodies and soft-touch keyboard decks. The basic design may be getting a bit long in the tooth, but I can fully understand Dell’s policy of “if it ain’t broke, don’t fix it.”

No discussion about large-screen laptops for creators can proceed without the mention of the venerable Apple MacBook Pro 16 (£2,399). The mini-LED display is superb as is the battery life and it’s pretty powerful even if the latest Alder Lake Intel chips have stolen a march on Apple’s M1 silicon. The only fault we found with it was that it’s a bit heavy for a 16in machine.

The Dell Alienware x17 R2 is more gaming-focused than the XPS17 but it’s a massively powerful and truly beautiful machine. Go for the version with the Nvidia RTX 3080 Ti, UHD display and 64GB of system RAM and you’ll have an awesome machine that can do anything and quickly albeit one with a short battery life and eye-watering £3,949 price tag.

LG’s Gram 17 (From £1484) is incredibly light for a 17in notebook weighing just 1.35Kg. It may run on 11th generation Intel chips but the 2,560 x 1,600 IPS display is a cracker and the battery life is good. The keyboard is a bit of a letdown but then something has to give if the result is a 17in laptop that weighs only a little more than a MacBook Air.

Thanks to a body machined from aluminium, the XPS 17 is a sturdy and solid piece of kit. At 2.3Kg, the Dell is a little heavier than the MacBook Pro 16 but only by 100g. Dell boasts that the XPS 17 fits a 17in display into a 15.6in form factor. At 375 x 248 x 19.5 that’s not a wholly unreasonable claim though it is dependent on exactly what 15.6in laptop we are talking about. More importantly, it is only 20mm wider than the MacBook but has the same depth and thickness (on average) despite the Apple having a smaller display.

Dell has resisted the urge to mess with the classically elegant design that has graced the XPS range for nigh on half a decade. The XPS 17 is still class-leadingly sleek, with very narrow screen bezels and a tidy array of ports and cooling vents. The slightly soft-touch carbon fibre keyboard deck is lovely, and is something that feels as good as it looks. 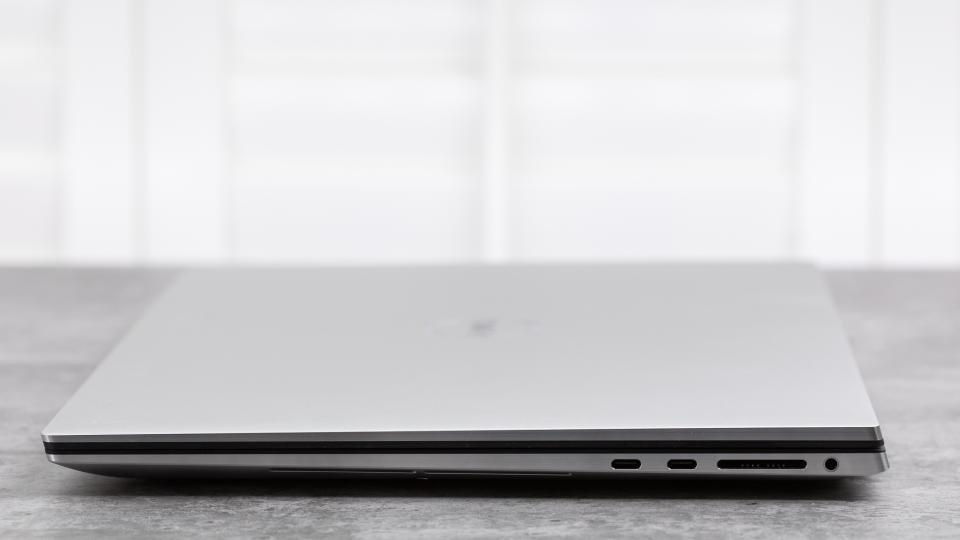 The only fly in the ointment is that Dell has just updated the design of the XPS 13 and the new design language is rather less industrial and more colourful, making the current XPS 15 and 17 machines now look a little just a little dowdy by comparison.

The 16:10 InfinityEdge display occupies an impressive 93% of the body and while the screen doesn’t tilt as far back as some other laptops, hitting its stop at around 145 degrees, that won’t be a problem when you’re sitting at your desk. Despite the super-thin bezels (5mm at the sides, 7mm at the top and bottom), the XPS 17’s aluminium lid is impressively rigid.

With professional photographers in mind, the XPS 17 features a full-size SDXC card reader. Inserted cards do stick out a few millimetres but not enough to risk breakage. My trusty old Samsung SD card recorded transfer speeds of 198MB/s which I was more than happy with.

The only other ports are a 3.5mm audio jack and four Thunderbolt 4 (40Gbits/sec) connectors, each supporting DisplayPort 1.4 video out and PowerDelivery charging. Bundled in the box, you’ll find a small USB-C to USB-A 3.0 and HDMI 2.0 dock to make up for the lack of Type-A and LAN ports.

Wireless comms are handled by an Intel Wi-Fi 6E capable AX211 card that also supports Bluetooth 5.1. Don’t get too excited about 6E speeds, since while the card supports 6GHz Wi-Fi the antenna itself doesn’t, so you’re stuck with 5GHz. I presume the antenna array has been carried over from the last generation XPS 17. 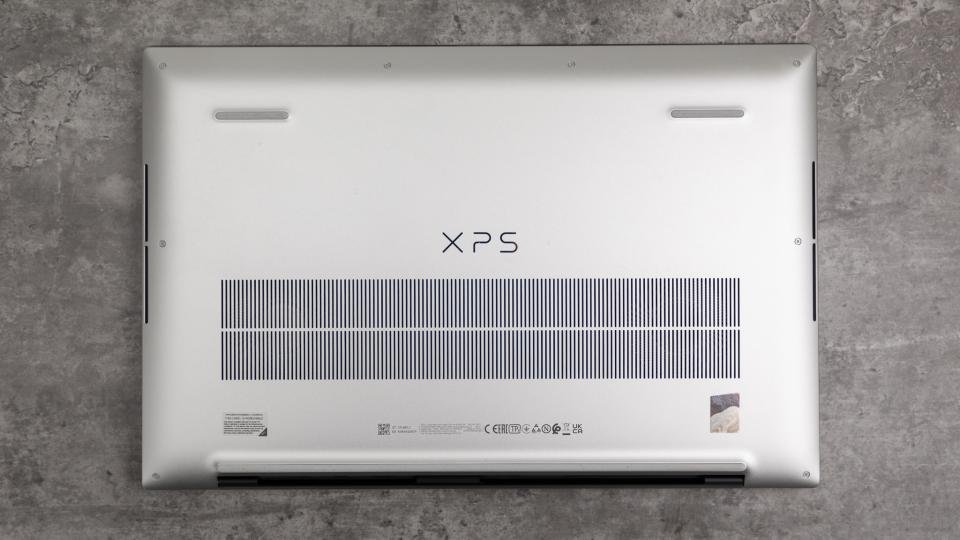 Take the back off the XPS 17 and you can access both SODIMM RAM banks and the two M.2-2280 SSD mounts. The Micron 3400 512GB drive in my review machine proved to be reasonably handy, recording sequential read and write speeds of 4,262MB/sec and 1,591MB/sec respectively.

The XPS 17’s keyboard isn’t the best I’ve ever used – the Lenovo ThinkPad range remains the gold standard in my book – but Dell’s effort certainly isn’t too shabby, with a solid and clean action and nicely judged if somewhat shallow (1.3mm) key travel. It’s a classically conventional layout, too, with no strange idiosyncrasies to trip you up along the way. What’s missing is a numeric keypad, the space it would occupy taken up by the 35mm wide speaker grilles. There’s a fingerprint scanner built into the power button in the top right corner of the keyboard, with the webcam also featuring Windows Hello IR facial recognition. 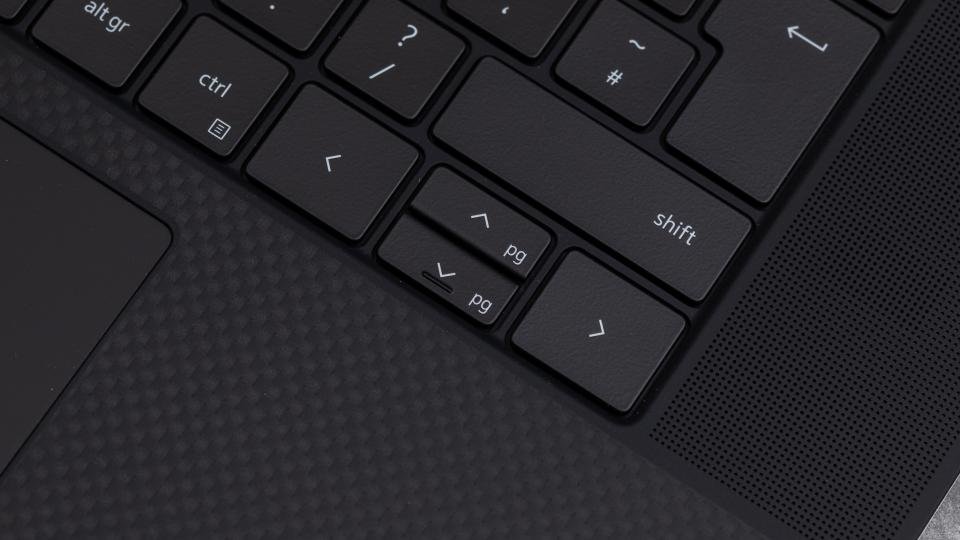 At 150 x 90mm, the trackpad is also one of the larger you’ll find on a Windows laptop and works all the better for it. The smooth surface is satisfyingly tactile, while the click action is perfectly calibrated in both feel and sound. 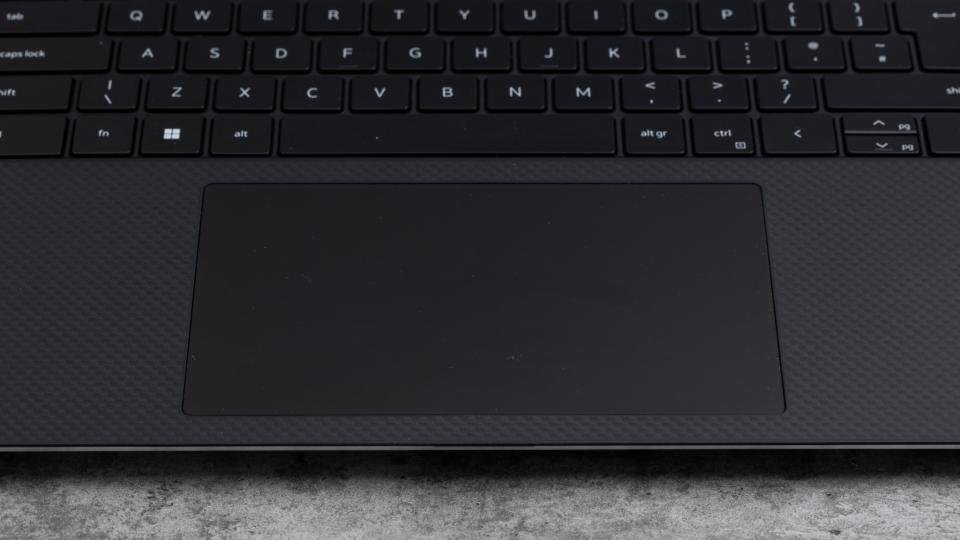 Like previous XPS machines, the new XPS 17 makes do with a less than stellar 720p web camera and while it does its job, the image quality isn’t very good, looking drab and grainy even in ideally lit environments.

You can switch between eight colour profiles using Dell’s PremierColour control panel and adjust various parameters like colour temperature and gamma within each preset. I tested the Delta E 94 colour accuracy against both the sRGB and DCI-P3 colour spaces and was mightily impressed by the results – 0.97 for the former and 0.95 for the latter. Anything less than 2 is good but less than 1 means effectively perfect colour reproduction.

The speaker system consists of two 2W woofers and two 2.5W tweeters firing up through the grilles that flank the keyboard. Between them, they can produce an average volume of 82dB from a pink noise source measured at 1m and peaks of 88dB from a music source. That’s impressive enough but combine it with the high degree of musicality and impressive level of detail and you have an altogether very impressive audio rig.

According to Dell, the XPS 17 is the first-ever laptop featuring Waves Nx 3D Audio for Speakers tuned by multi-Grammy Award-winning producer, Jack Joseph Puig. Be that as it may, the MaxxAudioPro does have a rather funky 3D surround system emulator which does give the vague impression that the sound source isn’t just in front of you.

In our in-house media conversion and multi-tasking benchmarks, the XPS 17 scored a highly commendable 392. For context, the 2021 model Core-i7 11800H / RTX3050Ti XPS 15 scored 269 when we tested it. The Dell also has the MacBook Pro 16in M1 Pro beat, which scored nearly 50 points less at 345. That’s a testament to the step Intel has taken with its new Alder Lake 14-core CPUs and of course, 32GB of dual-channel DDR5 RAM helps.

While the Nvidia GeForce RTX 3050 GPU in the Dell has more than enough power to chew through image and video processing tasks in good order, it stumbles a little when it comes to intense graphics work like 3D modelling and gaming because its TGP is set to a rather lowly 60W. The SPECviewperf 3dsmax test scored a pretty middling 62.8fps, while gaming at native UHD+ is pretty much out of the question unless you are happy with frame rates in the teens and repeated “Out of vRAM” warnings.

It’s not all bad news, though: dial the resolution down to 1,920 x 1,080 and knock the video detail down to a medium-to-low setting and games like Shadow of the Tomb Raider and Wolfenstein:Youngblood will run quite nicely with ray tracing on and some help from Nvidia’s DLSS. The former managed 90fps while the latter scored 60fps, but only because the benchmark feature registers on-screen frame rates and you aren’t going to see better than 60fps on a 60Hz panel anyway.

More demanding titles are harder to tweak into a playable form. Metro Exodus only ran at 57fps after I’d picked the lowest (High) preset and dropped the detail and ray tracing quality, while Hitman 2 could only manage 24.8fps even with SuperSampling dropped to 2. Of course, you really can’t expect more from a machine using the runt of Nvidia’s GeForce GPU litter and one with the wick turned down at that. To be fair, the XPS 17 is not being promoted as a dedicated gaming machine, either.

In the name of optimisation, Dell has installed a Power Manager app that lets you change the cooling profile between Optimized, Cool, Quiet and Performance. The performance benefit of the last is slight but even with the fans running at full speed the XPS 17 is impressively quiet. It makes sense to leave it in that setting unless maximising the battery life is a priority.

For a laptop with a 17in UHD+ screen, the XPS17 didn’t do at all badly in our battery test where we turn the screen brightness down to 170cd/m², engage Airplane mode and leave a video running in VLC. The 97Wh battery lasted for 9hrs 14mins. Granted, the MacBook Pro can do better to the tune of 7 hours but the Dell’s figure is still good for a Windows machine.

Push the feeling that the XPS design team is rather resting on its laurels to one side and the XPS 17 is a truly impressive omni-competent machine that should suit anyone in the creative industries or simply anyone who just wants a good large screen notebook for general use.

That screen, of course, is the key feature: large, bright, colourful and pin-sharp it’s hard to beat and it’s accompanied by a top-notch sound system to make a truly excellent multi-media machine.

The GPU’s low TGP setting is a small drawback but outside of hardcore gaming, it’s not a problem that makes itself felt and a higher power rating would have had an impact on battery life. In short, the new XPS 17 is just as good as the previous version, just more powerful thanks to the new Alder Lake processor.