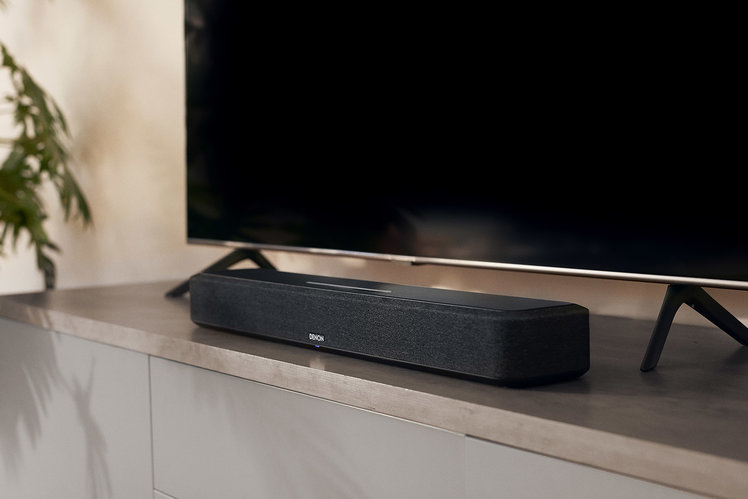 The Sound Bar 550 delivers the immersive benefits of these new audio formats via digital signal processing, rather than using upward-firing drivers, so expectations need to be managed when it comes to full immersion. The absence of a separate subwoofer and rear speakers also limits the overall delivery.

Along with integrated music streaming services and built-in voice assistants, the HEOS platform supports optional rear speakers and sub via its wireless network. This approach is expensive, but at least the Home 550 caters to those craving greater surround envelopment and deeper bass.

The Denon Home Sound Bar 550 takes its design cues from the other speakers in the Home series, with a matte black top and a wrap-around black fabric grille. It’s simple but elegant, getting on with the job of upgrading your TV’s sound without drawing attention to itself. The matte black finish also doesn’t reflect the screen, something both Bose and Sony could learn from.

The Sound Bar 550 feels solid and well engineered, while its compact dimensions make it ideal for screens between 40- to 55-inches. The Denon’s height means it might block the screen when stand mounted, but there’s also the option to wall-mount.

The motion-activated touch panel on the top offers basic controls, while an indicator light at the front provides simple feedback.

The Denon Home Sound Bar 550 provides plenty of connectivity, with the physical ports housed in a recessed area at the rear. Here you’ll find an HDMI input, HDMI eARC output, optical digital input, USB port, 3.5mm jack, and an Ethernet port. This is more than rival ‘bars like the Sonos Beam, and the HDMI input is a welcome addition for anyone running out of inputs on their TV. 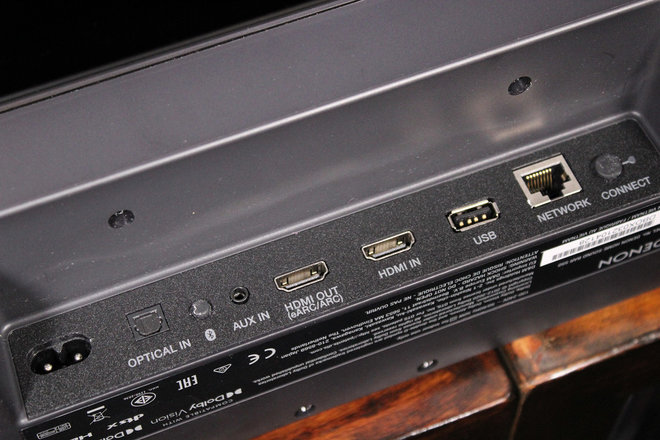 The HDMI connections all support 4K/60, HDR10 and Dolby Vision, which should be sufficient for most people, but anyone wishing to game at 4K/120 is advised to connect their console directly to the TV and send the lossless audio back via eARC.

In terms of wireless connectivity, the soundbar offers dual-band Wi-Fi and AirPlay 2 for lossless streaming, and Bluetooth 3.0 if quality is less of an issue.

Like much of the competition the provided remote is small and fiddly, but includes most of the buttons you’ll need to effectively control the soundbar, allowing you to select different inputs and sound modes, adjust the volume or bass level, and choose between three presets.

However, the zapper does lack playback controls, which suggests Denon expects you to use the HEOS app for listening to music. This uses a clean interface, with all the controls found on the remote, plus a few more to teak the overall performance. It also provides feedback, which some might find useful given the lack of a proper display. 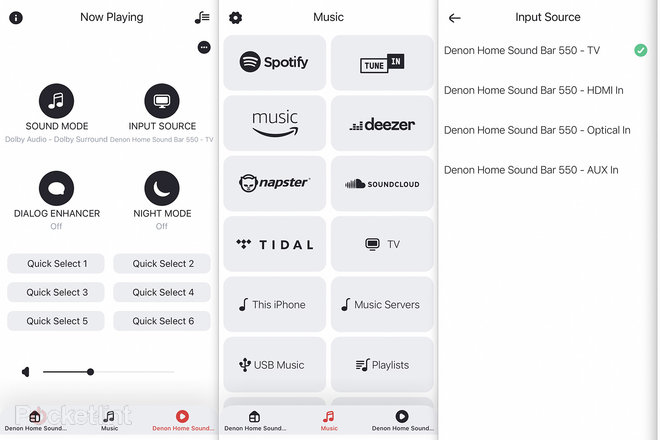 After a lengthy delay the Home 550 now includes Alexa, providing a built-in smart assistant and a degree of voice control. The microphones are sensitive, meaning you don’t need to shout, and the system is responsive, providing yet another method of interacting with this clever soundbar.

Since the Home 550 only has two channels, Dolby Atmos and DTS:X soundtracks are delivered using digital processing. While this can be effective, it’s never as immersive as dedicated upfiring speakers that physically bounce sounds off the ceiling to create overhead channels. 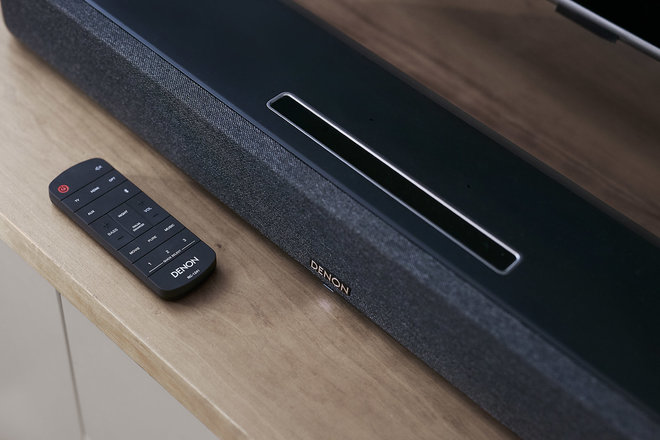 There’s a night mode and a dialogue enhancer, both of which should be self-explanatory, along with a pure setting that leaves the audio unmolested, another designed specifically for music, and a movie option that offers a choice of Dolby Surround or DTS Virtual:X upmixing.

HEOS is Denon’s answer to the Sonos’ multiroom ecosystem, and offers access to extensive features via an integrated app. Music fans can use this app to enjoy streaming services such as Spotify, Amazon Music HD, Tidal, and Deezer, along with TuneIn Internet Radio.

Sound qualityHEOS also provides an opportunity to create a multi-channel sound system using other speakers in the Home range. The Home 150, 250 and 350 can be employed as wireless surround speakers, and for deeper bass the DSW-1H wireless subwoofer is also supported. But this approach significantly increases the cost of a system that still lacks a centre or overhead channels.

The Denon Home Sound Bar 550 is built around a high-quality two-channel system, with each speaker composed of a 19mm tweeter and a pair of 55mm full-range drivers. A trio of 50 x 90mm ‘racetrack’ passive radiators are employed to give the low-end extension a boost. It’s an almost identical layout to the Sonos Beam Gen 2, which costs the same and has similar ambitions.

The Denon Home Sound Bar 550 is an impressive sonic performer that achieves its key objective of sounding significantly better than your TV’s built-in speakers. Despite its compact proportions it manages to generate a big if front-heavy soundstage, enabling it to be partnered with larger screen sizes without embarrassment.

The Home 550 can project a sound field that has width and height, thus creating the illusion of greater immersion. It even manages to produce solid and responsive bass, which is a surprise considering it’s not assisted by a sub. The high-quality nature of its speakers also ensure the delivery is clean and well-defined, with some nice detail in the treble and an uncluttered midrange. 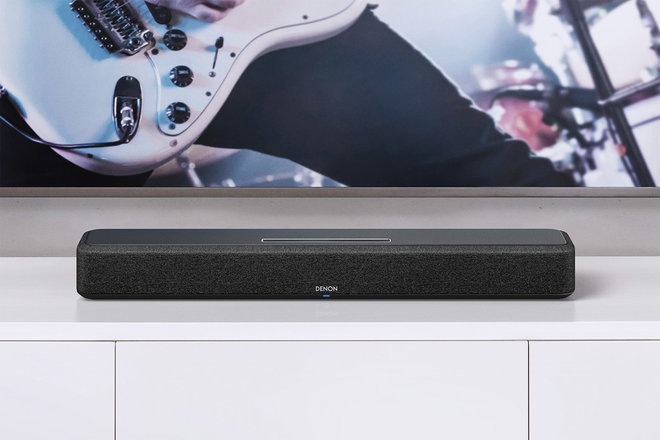 This makes the Denon a great option for music listening, especially in its pure sound mode. Dialogue is also well served, despite the lack of a dedicated centre channel, although if you’re struggling the enhancer mode can help with clarity. The placement of effects is enjoyably precise, and no matter how complex the mix, audio cues are skilfully placed around the TV screen.

While Denon is somewhat cagey about the amplification in the Sound Bar 550, at sociable levels this is an accomplished unit that retains its composure. However, those missing specs suggest it might be under-powered, and there is a distinct lack of headroom when it comes to the dynamic range. The ‘bar also struggles at higher volumes, often sounding strident and harsh. 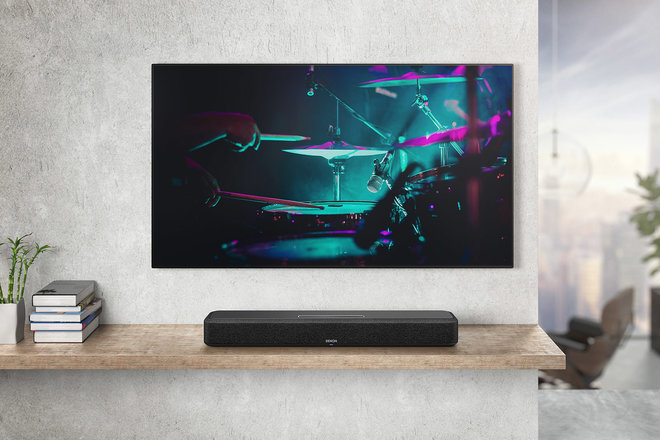 In terms of other negatives, the Home 550 obviously can’t dig as deep as a soundbar with a separate subwoofer, and there’s little in the way of surround envelopment due to the absence of rear channels. The lack of upward-firing speakers also means there are no clearly defined overhead effects, and while the processing adds some dimensionality, it’s not genuinely immersive.

Having said all that the Denon is a lively performer, and watching Godzilla vs Kong with its dynamic Atmos soundtrack is an undeniably fun experience. Yes, the bass hits don’t go as low as it could, but you’ll still be surprised at the feeling of weight this single soundbar delivers. There’s a pleasing sense of scale too, with the Atmos processing never descending into chaos.