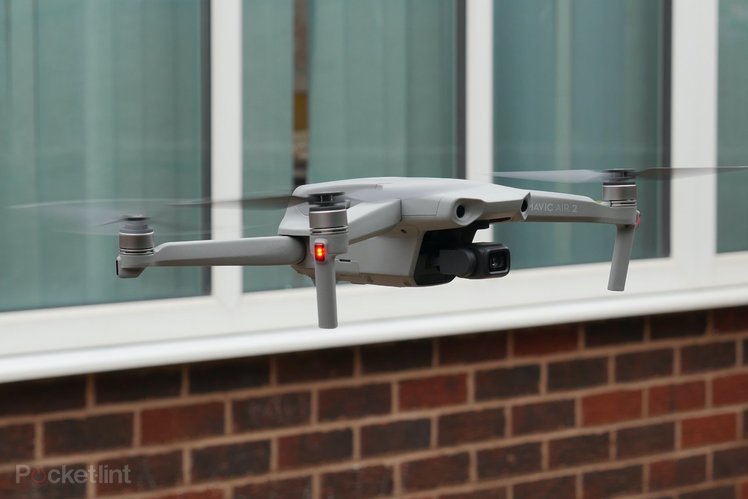 DJI is back with an all-new Mavic drone, and this one seeks to bring the power and finesse of its high-end Mavic models and put them in a much smaller, more affordable package. It might just be a winner.

Having launched a compelling tiny toy drone in the Mavic Mini, DJI had to up the ante yet again to wow us with the second generation Mavic Air. And it may just have succeeded. On paper, this latest machine is very enticing.

A couple of years ago, when the first Mavic Air launched, it didn’t quite look like the other Mavics in the DJI product lineup. For the past couple of years, the manufacturer has been working on the entire range of Mavic consumer drones, and with that updating effort, the drones are all starting to look like a family. The Mavic Air 2 is very much a small version of the Mavic 2, or a bigger version of the Mavic Mini.

Looking at it from the side, folded, it has a less rounded look than the first Mavic Air, with a front that looks something like a shark nose. The front arms fold outward, while the rear arms fold down and away, just like they do on other Mavics. The camera is mounted on the front on a three-axis gimbal, directly beneath the nose.

Perhaps the biggest design change is the battery placement. It takes up a big portion of the top of the drone, and its exterior actually makes up the outer surface of the flying machine, with buttons on either side to release it and a power button on top. There are four green LED lights actually on the button to show you when it’s switched on, or how much power is left in it.

Moving the battery to the top has meant DJI has been able to redesin the underside and – more vitally – add in additional sensors for better distance measurement and visual recognition. More on that a bit later. 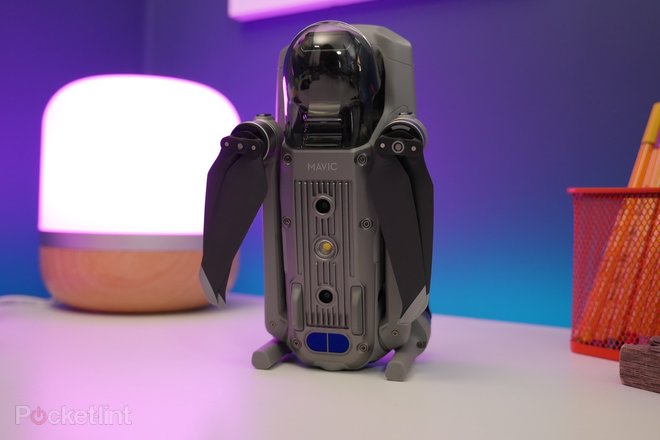 At 570 grams, it sits somewhere between the Mavic Mini and the Mavic 2 Pro in terms of weight. It’s still too heavy to be classed as a toy drone, and so technically still needs the owner and flyer to go through the CAA’s theory test and registration process in the UK. In other markets, the laws are different, of course.

As well as revamping the look of the actual drone, DJI has refreshed the physical controller too. It’s no longer a tiny smartphone-sized control pad that holds your phone at the bottom in a couple of moving grips. Instead, it’s sturdier, better to hold and has a much more sensible smartphone grip at the top.

This phone grip is pulled up from the top edge, and can be stretched far enough to hold virtually any smartphone currently on the market. The cable to connect to your smartphone is neatly tucked into that top edge as well, wrapping around the base of the grip. You get three cables with the drone too, so you can connect your iPhone with the Lightning cable, or use a USB Type-C or Micro USB cable with an Android smartphone.

As with previous controllers, you can unscrew the joysticks and stow them away. This new controller has dedicated rubber lined holding ports in the bottom edge, on on each side of the Type-C port you use to charge the internal controller battery. The front has the usual power, landing and flying mode switches and buttons too.

While it doesn’t have individual antennas that you unfold and point outwords, the controller does still have the physical camera controls on the top edge for adjusting the camera angle and snapping photos/video. It’s also capable of streaming HD footage direct from the drone from distances up to 10km, which is further than is technically allowed in a lot of countries.

With its 3,500mAh battery, the Mavic Air 2 not only promises to have great flying time for a small drone, it has flying power that matches and exceeds that offered by some of DJI’s bigger drones. In fact, it can go up to 34 minutes of flight time on a full charge according to DJI. Real life flying time won’t reach that far, of course, but it’ll still be much better than the original Mavic Air’s promised 21 minutes. 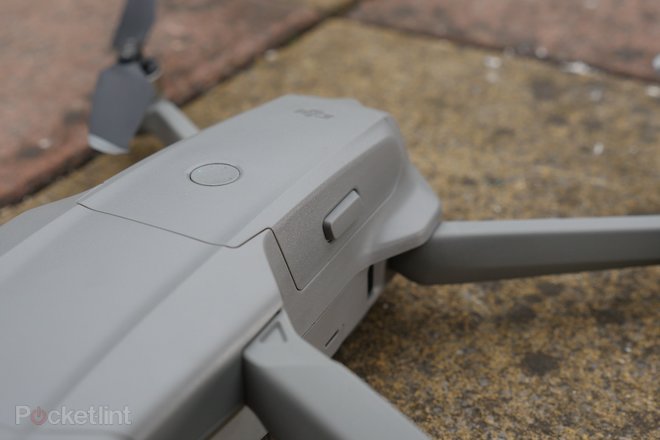 As well as a long-lasting battery, the Mavic Air 2 is equipped with a good number of sensors for obstacle avoidance. There are two on the front and two on the back, plus a few different sensors on the underside.

Rather than just have cameras for recognising the patch of surface it took off from, the Mavic Air 2 has depth sensors and a light, to enable it to recognise where it took off from, and also measure how far it is from the ground more accurately, even when it’s not very bright outside.

All of these sensors combined have enabled DJI to equip the Mavic Air 2 with APAS 3.0 obstacle avoidance, and that means it can determine a route around obstacles it sees coming up in its flight path rather than just stopping dead and refusing to move forward.

It’s got some impressive wind resistance too. DJI says it can survive in winds up to 10.5m/s (around 23.5mph/37.8km/h), staying smooth and stable when it gets breezy, thanks to its redesigned motors and its three axis gimbal holding the camera steady. Of course, we’ll need to do a lot more flying to see just how long-lasting and durable this drone is. But from the numbers alone, it’s looking very good indeed.

As well as the improved battery and obstacle avoidance, DJI’s latest portable drone also has an improved camera sensor and improved image processing and algorithms. It starts with the larger 1/2″-inch CMOS sensor boating 48-megapixels. You can use all of those pixels if you want to, but by default it uses pixel binding to turn 48 into 12-megapixels, just like a lot of current smartphones do. 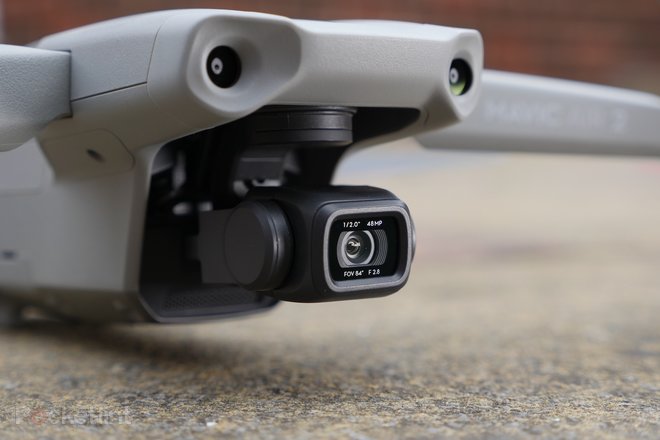 This sensor makes use of an AI adjustment algorithm called SmartPhoto and it makes use of three different automatic processing tools. One is HDR Photos, which combines seven different exposures to create one dynamic photo. Another is Hyperlight, which is designed to capture more light and detail using a similar process when light levels drop. There’s also Scene Recognition for boosting blues in the sky and green grass, plus recognise sunsets, snow and trees and adjust settings for those.

Video capabilities are improved too. For those who like that super smooth 4K footage, we now have 60 frames-per-second recording at the highest resolution. And for slow-mo, there’s both 120fps and 240fps at full HD.

Again, without further testing time we can’t fully comment just how good this new hardware is, but we’re excited to try it and find out.