Modern smartphone cameras are capable of some incredible things, and the continued popularity of social media apps means mobile content creation is bigger than ever. However, while high-end handsets can offer some mightily impressive in-camera stabilisation, for those looking for cinema-smooth camera movements and more creative control, nothing quite matches up to a dedicated mechanical gimbal.

DJI’s latest Osmo Mobile three-axis stabiliser does just that, while taking the tried and tested design and streamlining the experience quite a bit. The new OM 5 is slimmer and lighter than its predecessor, folds down smaller, and now has a telescopic selfie stick for greater flexibility.

While its new design isn’t without compromises, with solid stabilisation and a suite of creative tools all packed into a compact frame, the DJI OM 5 is the new high-end stabiliser to beat. DJI OM 5 review: What do you get for the money?

For £139, you get the folding three-axis stabiliser with built-in selfie stick, a magnetic phone clamp, a screw-in tripod base, carry pouch and wrist strap. The gimbal itself is a slimline handle constructed from a mixture of metal and premium-feel plastics, with various rubberised elements. There are six physical controls located on the handle, including a joystick, zoom slider, record button and a toggle that switches between cameras. You can also rotate between landscape and portrait shooting modes and select tracking objects right from the handle.

An adjustable magnetic phone clamp allows for easy smartphone attachment, and the built-in telescopic extension rod can be extended up to 215mm, with an adjustable angle up to 90 degrees at the base of the phone mount. When not in use, the gimbal folds down neatly for storage. The OM 5 works in partnership with DJI’s Mimo iOS and Android smartphone app. Once paired over Bluetooth, the app gives access to a full suite of creative tools with dedicated modes for timelapses, motion lapses, hyper lapses and panoramas. You can also edit your footage within the app, and a host of editing templates are included.

Design-wise the OM 5 has had a real shake-up, with a head-to-toe revamp. It’s a third smaller while folded, 100g lighter than its predecessor and overall feels much more refined. Edges have been smoothed, angular elements have been removed and metal components have been introduced to the joints. There’s also a choice of colours this time around: the OM5 is available in either classic Athens Grey or in new Sunset White.

As teased earlier, the OM 5’s headline update is the inclusion of a built-in extension rod. Packing away neatly into the handle, this telescopic arm adds up to 215mm of reach for filming over obstructions, fitting more people into your group shots or simply enabling better framing for your selfies.

The magnetic phone clamp that debuted with last year’s OM 4 sees a welcome return, although this time without the additional adhesive ring mount. DJI has also launched a new optional accessory mount with a built-in fill light. 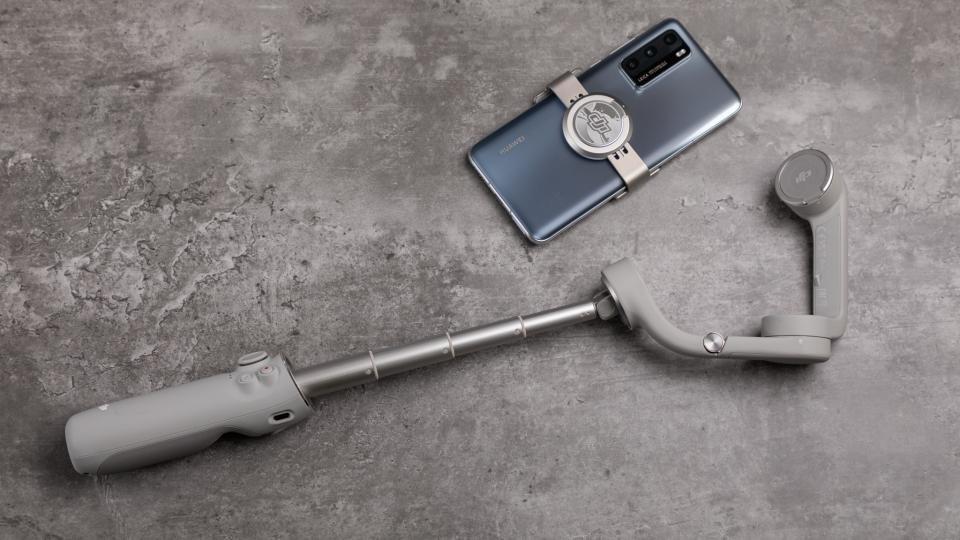 These design changes haven’t come without compromise, however. The slimmer body combined with the handle having to house the extension rod has resulted in a much smaller battery. While the OM 4 offered up to 15 hours of charge, the OM 5’s quoted stamina has more than halved, down to just 6.4 hours. The USB power port that enabled the Osmo Mobile 3 and OM 4 to charge your smartphone on the go has been removed as well.

On the software side, DJI’s Mimo app has also seen a refresh. A new ShotGuides feature analyses the scene you’re filming and is able to provide a shot list and editing template suggestions. The tracking function has also been updated to ActiveTrack 4.0 to provide more consistent results while tracking faster moving subjects.

I’m a big fan of the OM5’s design refinements. While DJI’s stabilisers have usually felt just fine in the hand, the previous generations now feel downright chunky compared to the OM 5. The smaller build and smoother frame also make the OM 5 a lot easier to pack and a lot less likely to get caught on something in your bag.

The telescopic selfie stick is a welcome new addition as well. Having used extending models from Zhiyun and Joby, it was a feature sorely missing in DJI’s OM lineup. The extension rod adds a great deal of flexibility, enabling you to access a wider range of shooting angles while filming and frame better selfies and group shots.

DJI’s Mimo app also continues to be the most refined stabiliser app I’ve used. Pairing is painless, the tutorial tooltips are genuinely useful and the creative modes work really well. Producing time lapses, hyper lapses and panoramas only takes a couple of clicks, and motion lapses that would normally take a lot of expensive kit can be set up in seconds.

Stabilisation is smooth and consistent. There are several movement modes to pick from, including follow, tilt lock and a first-person view mode, and once set up to your liking, controlling camera movements feels natural and intuitive.

While camera tracking can be a little trickier to get the hang of initially, it’s also a great feature to have, especially while filming in selfie orientation, as it can automatically track to keep your face centred in the frame.

The smaller battery is a big blow. Dropping from up to 15 hours on the OM 4 to under six-and-a-half hours on the OM 5 is a significant change. Even if you don’t plan on filming for hours at a time, the shorter battery life means you’ll always need to make sure it’s fully topped up before heading out. Removing the ability to use the stabiliser as a power bank for your phone also feels like a backwards step.

The Android version of the DJI app is also hamstrung. While iPhone users can dial in specific shutter speeds, ISO values and record up to 4K resolution at 60fps, Android users are limited to basic exposure compensation and recording tops out at 4K30. While this is an Android operating system limitation and so not an issue unique to DJI, it’s something Android users should be aware of. 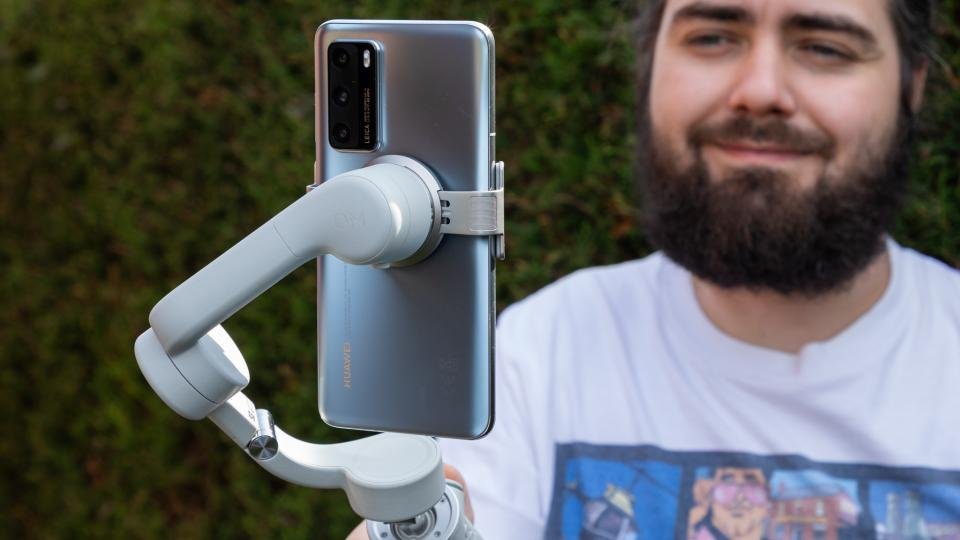 You can get around these restrictions by setting up the OM 5 in the DJI app before hopping into a different app for recording, but you’ll miss out on many of the DJI app’s exclusive features.

It’s also worth noting that since the OM 5 uses a combination of mechanical stabilisation and in-camera stabilisation, results will ultimately depend on which smartphone you’re using. My Huawei P40, which already has fantastic optical image stabilisation, produces buttery smooth footage while paired with the OM 5. My older Huawei P20 Pro, meanwhile, is noticeably jerkier.

The price is also a bit of a sticking point. Rival models from Zhiyun and Joby comfortably clock in at under £100, and last year’s chunkier but similarly performing OM 4 can now be picked up for just £119.

With its slimmer and lighter design, telescopic selfie stick and useful app additions, the DJI OM5 is the most well-refined smartphone stabiliser I’ve tested.

It is, however, quite unfortunate that the new design upgrades have come at the expense of battery life and external charging, but for most users I think the benefits will still outweigh the drawbacks. If you’re in the market for a top-notch three-axis smartphone stabiliser, then the DJI OM 5 is one of the best around.