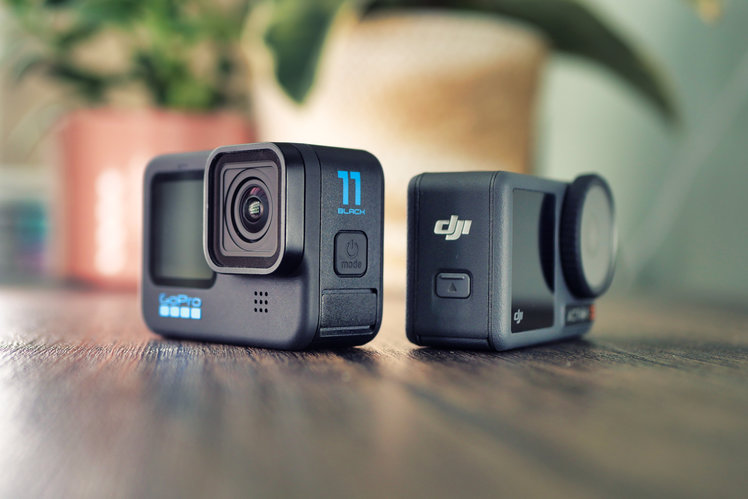 Both the DJI Osmo Action 3 and GoPro Hero 11 Black launched on the same day, just one hour apart. It’s clear from this launch window that they’re both gunning for the top spot in the action camera game.

But while both look quite similar, they offer different features that will appeal to different types of users. To help you decide which is best for you, we’ve done a deep dive into the specs as well as tested out the camera’s various features. Let’s take a look at what they offer, and where they might not be the best fit.

Both the Hero 11 and Action 3 take the prototypical action camera form factor, with DJI ditching its modular ways in favour of something more traditional. This means that both cameras work with pretty much every action camera mounting solution that you’ll find, and feel very similar to operate. 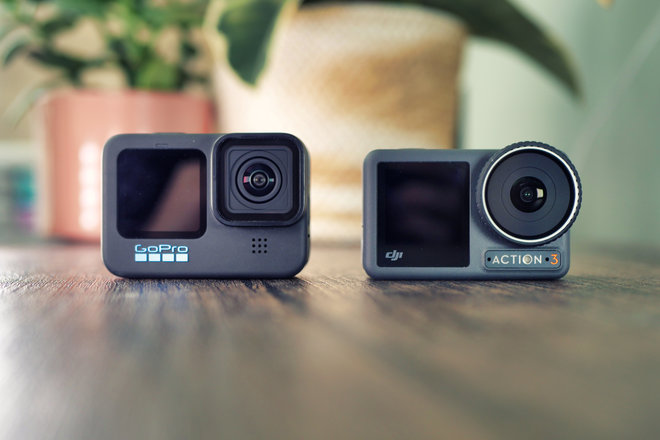 Both have replaceable lens covers, and both benefit from hydrophobic coatings which help ward off unwanted water droplets. Both are waterproof without the need for additional housings, but the DJI can go to a depth of 16 metres, which is deeper than the 10 metres offered by the Hero 11.

The Osmo Action 3 is marginally lighter than the GoPro and slightly smaller in size. However, it requires one of its magnetic clamping mounts or a frame to use it with accessories, which will make the weight difference negligible. The Hero 11 has fold-out mounting tabs built in, so their weight is already accounted for. 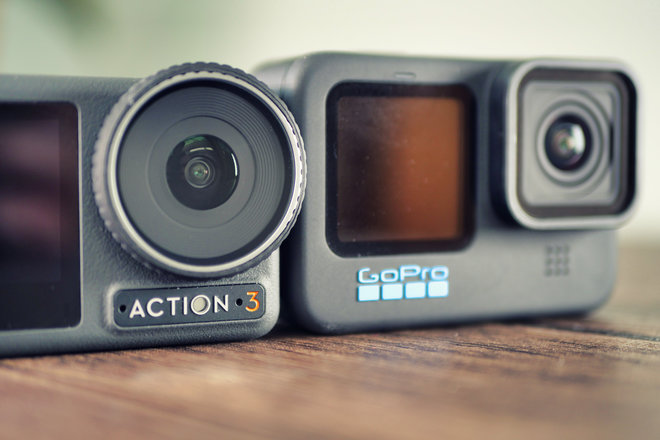 The magnetic mounting system on the Osmo Action 3 means that you can switch between mounting locations quickly, whereas you’ll need to undo the thumb screw every time you change mounts on the GoPro.

The Action 3 also benefits from a front touchscreen, and you can use it to change your recording settings, whereas the Hero 11’s front screen is for viewing only. That said, we have noticed that the DJI’s front screen is more limited in its live view, disabling itself when a demanding recording format (like 4K 120fps) is active.

When it comes to video specifications, the Hero 11 Black wins on almost every front, but given that it’s the more expensive option, that’s to be expected. 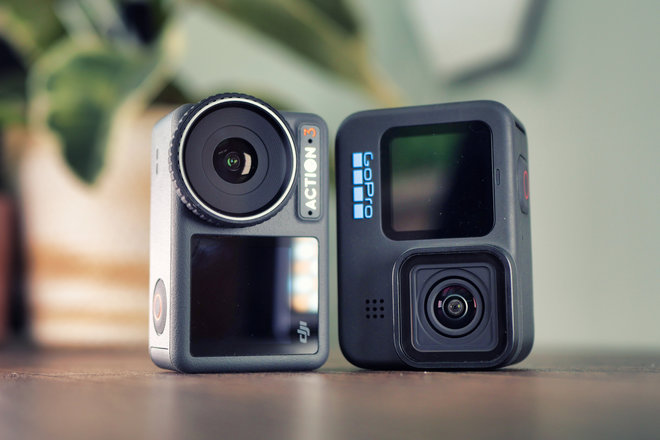 The GoPro Hero 11 Black is currently the only action camera to offer 10-bit colour in its video recording, although DJI has said it plans to add 10-bit recording in future firmware. Both cameras offer high bit-rate recording, with the Action3 maxing out at 130 Mbps and the Hero 11 at 120 Mbps.

The Hero 11’s 8:7 sensor allows for a new full-frame shooting style that allows you to choose between a 16:9, 9:16 or 4:3 crop in post, DJI doesn’t currently offer an equivalent feature.

When it comes to image quality, both cameras perform excellently. We preferred the GoPro image in good lighting, as the warmer more vibrant colours were more pleasing to our eyes and the dynamic range was superior. However, in low light scenarios, the DJI performs better, producing a brighter and more detailed image with better stabilisation.

Both cameras offer 360-degree horizon-locking, The Hero 11 can do this at 5.3K 30 fps, while the DJI camera is limited to 2.7K 60 fps. Both also offer excellent image stabilisation, and it’s hard to say which system is superior, though it’s worth noting that the GoPro is compatible with ReelSteady and GyroFlow for adding stabilisation in post-production, while the Action 3 is not. 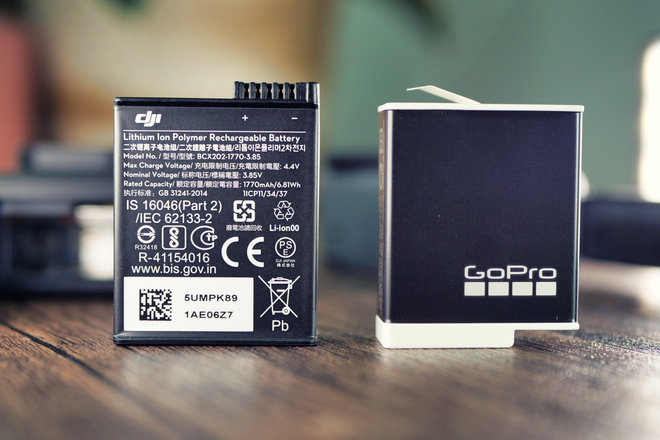 DJI and GoPro both include their take on a cold-weather resistant long-life battery in the box. DJI calls it an Extreme battery, while GoPro calls it Enduro. The DJI option gives you an extra 50 mAh, but there’s not a huge difference in battery life between the two cameras. However, when it comes to weather resistance, DJI has the edge, with an operating temperature as low as minus 20 celsius, compared to GoPro’s minus 10 rating.

The Osmo Action 3 also charges faster than the Hero 11, offering an 80 per cent charge in just 18 minutes with its fast charge tech. Comparatively, the Hero 11 will need about 2 hours for a full charge. 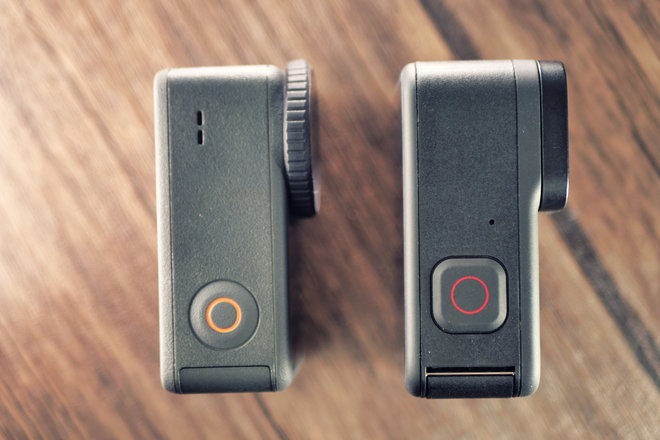 Both cameras have a variety of time-lapse and hyper-lapse presets available in camera, but GoPro’s options are more refined and tweakable. The same is true for its app features but some of these are locked behind the company’s subscription paywall, which is certainly worth keeping in mind.

The DJI Osmo Action 3 and GoPro Hero 11 Black are two of the best action cameras on the market, and chances are, you wouldn’t be disappointed with either option.

In the majority of scenarios, we feel that the Hero 11 is the superior camera, but it comes with a serious price tag, too. The DJI Osmo Action 3 offers much of the same experience at a significantly lower price and has plenty of its own advantages.

If you’re likely to shoot indoors and in low light a lot of the time, then you’ll be better served with the Action 3. If you shoot in good lighting and want to colour grade and tweak your footage, you’ll want to go for the Hero 11 Black.

Whichever you choose, we don’t doubt that they’ll enable you to capture some epic action shots.