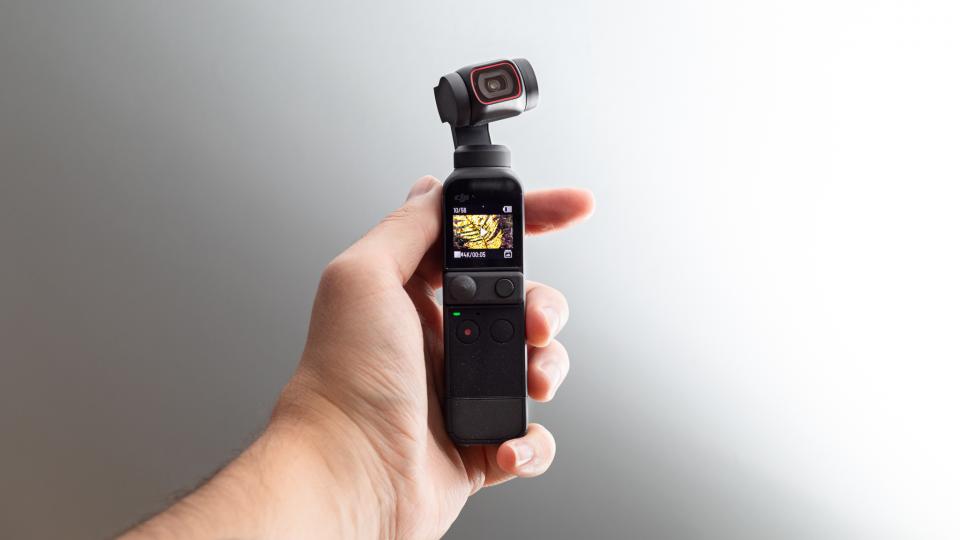 Rock-steady stabilisation, 4K recording, and a suite of smart features all wrapped up in a pocket-sized package

DJI’s compact stabilised video camera has received an update, in the form of the appropriately titled Pocket 2. Hot on the heels of the DJI OM 4 smartphone gimbal, the Pocket 2 packs many of the same headline features, including a three-axis stabiliser, time lapse, hyper lapse, and panorama modes, but it also has a dedicated 4K video camera.

For under £350, this pocket-sized camera could be the ideal all-in-one solution for vloggers, Youtubers, or just about anyone who wants to shoot smooth fully stabilised footage on the go. 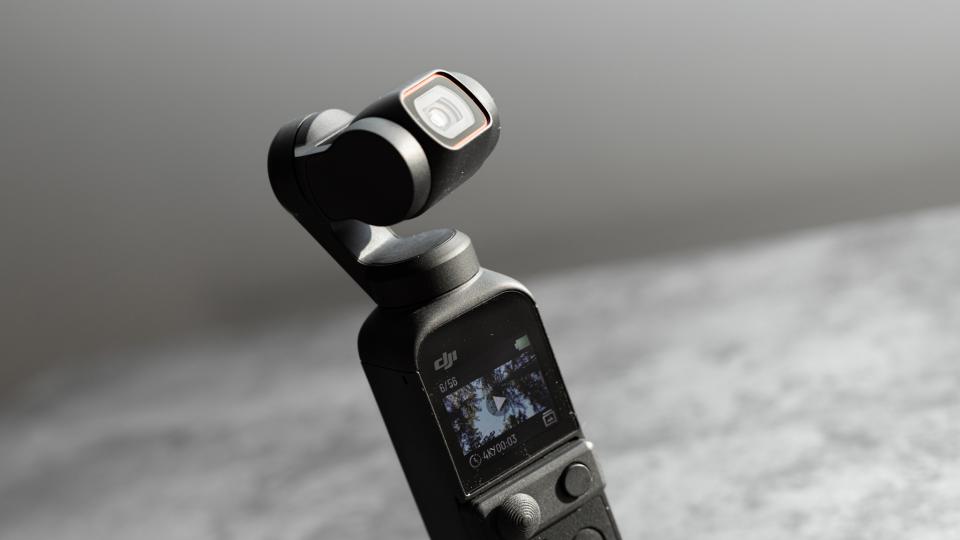 DJI Pocket 2 Review: What you need to know

The Pocket 2’s premise is to pack a creative 4K video recording setup into a portable form factor. To this end, it brings together a 4K video camera, three-axis stabiliser, an array of microphones, and a suite of smart shooting modes in a single pocketable device. 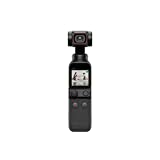 On the outside, the Pocket 2 looks pretty similar to its predecessor, but DJI has been hard at work under the bonnet. While video recording still tops out at 4K at 60fps, stills can now be shot at up to 64MP. The lens is also wider, brighter, and compatible with DJI’s magnetic filters. In-video tracking has also been improved with DJI’s ActiveTrack 3 and HDR video recording is expected to arrive in a future firmware update.

While it’s a fully-featured device in its own right, the DJI Pocket 2 can also be paired up with your smartphone via the included adapters, which allows you to use the DJI Mimo app as a secondary viewfinder as well as view your footage and upload directly to social media. 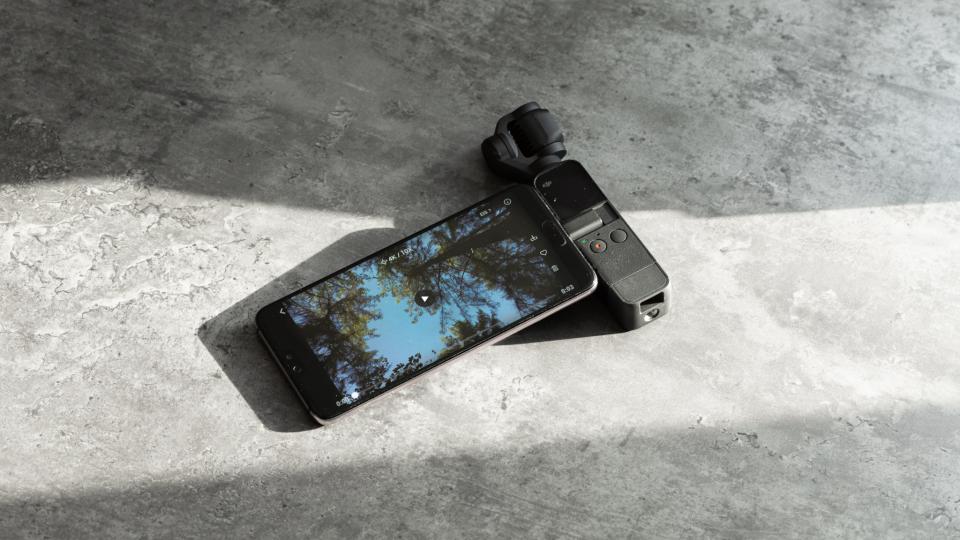 Alongside recording stabilised video and shooting stills, the Pocket 2 has a range of dedicated creative modes. Hyper lapse, time lapse and motion lapse are all available in-camera as well as video tracking, slow motion, and a panorama function.

An ecosystem of accessories have also launched alongside the Pocket 2, including a Wi-Fi transmitter, wireless microphone, wide-angle lens adapter, ND filters and a power bank charging case. 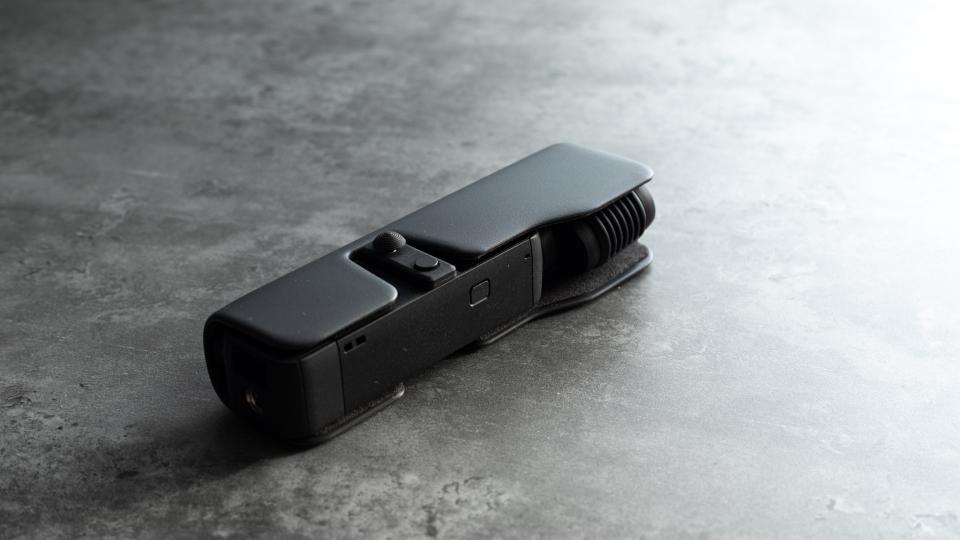 For £339, you get the DJI Pocket 2 with USB-C and Lightning smartphone adapters, a tripod-compatible base and a protective cover. Or, for £469, you can get the ‘Pocket 2 Creator Combo’ which also comes with a wireless transmitter, wide-angle lens adapter and wireless microphone.

Weighing up the Pocket 2’s competitors is a little tricky as few devices cover quite as much ground. Arguably, DJI’s own OM 4 smartphone stabiliser is its closest rival. Both the Pocket 2 and OM 4 utilise DJI’s Mimo smartphone app and so share many of the same features such as tracking, panorama, and motion lapse modes. At £139, the OM 4 is significantly cheaper than the Pocket 2, but you will have to factor in supplying a quality phone. 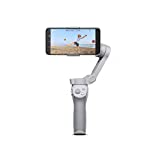 If a standalone camera with smooth, stabilised video is your top priority, then GoPro’s Hero 9 Black is also worth a look. While it may not have a three-axis gimbal, GoPro’s Hypersmooth 3 stabilisation will still get you pretty close. The Hero 9 Black can record videos at up to 5K resolution, produce time lapses and motion lapses, and since it’s a GoPro it’ll also stand up to rougher shooting conditions than the Pocket 2. The GoPro Hero 9 Black on its own will set you back £430, but if you buy it bundled with a one-year GoPro subscription you can pick it up for less than the Pocket 2 at £330. 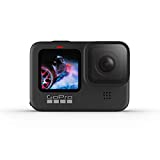 DJI’s previous stabilised camera, the Osmo Pocket, is still available to purchase, too. It features a smaller sensor and still images are limited to 12MP, but otherwise, it shares many of the same features. Perhaps the main thing to look out for is that the original Pocket won’t be compatible with DJI’s new ecosystem of accessories and it doesn’t feature a standard tripod mount. It is, however, a fair bit cheaper at just £262. 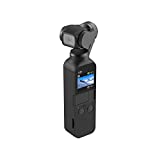 As the name suggests, the DJI Pocket 2 is compact and pocket-friendly. In fact, it doesn’t take up more space than a full-size chocolate bar and weighs just 117g. 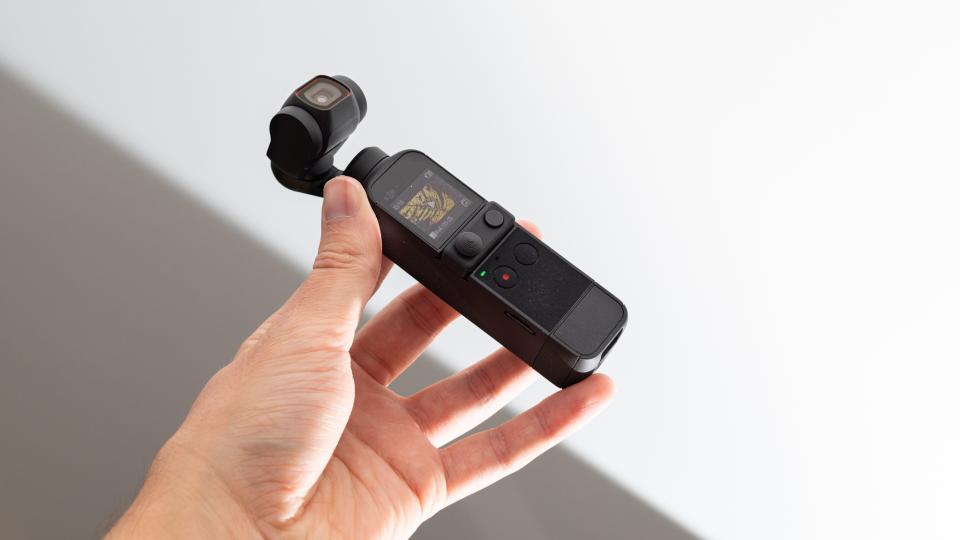 Starting from the top, there’s a camera module which is married to a three-axis gimbal. The imaging sensor is a 1/1.7in CMOS type (up from the 1/2.3in CMOS in the original Osmo Pocket) and the lens is a wide 20mm equivalent f/1.8 (up from the Pocket’s 26mm f/2.0). While the video specs remain in line with the previous model – topping out at 4K 60fps – the Pocket 2 can capture high-resolution 16MP images (up from 12MP) and ultra high-resolution images at 64MP.

The lens housing is magnetized to allow for easy attachment of DJI’s own accessories. Currently, there’s a wide-angle lens (equivalent to 15mm) on offer, as well as a set of ND filters.

For audio, the Pocket 2 has a set of four microphones. The mics are positioned below the camera with one facing in each direction, with the option to engage all four for DJI’s ‘Matrix’ stereo mode (more on that later) or simply prioritise the mic that’s currently in front of the lens. 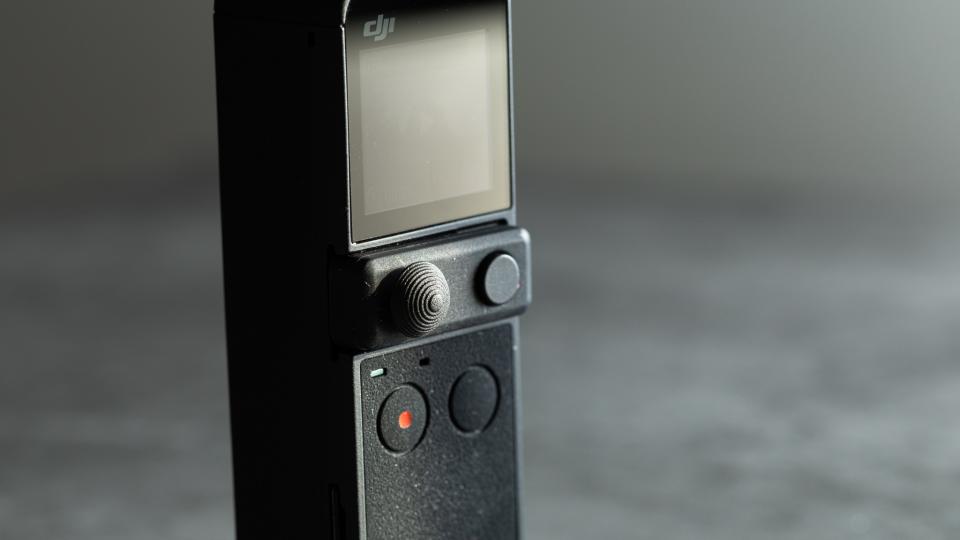 A small 1.1in touch screen is on the face of the handle, as well as two navigation buttons, a record button, and a multi-directional joystick. A dedicated power button is on the right side, with a microSD card slot on the left – UHS-I Class 1 or 3 microSD cards are recommended, supporting cards up to 256GB. The slot itself is completely exposed to the elements, though.

The Pocket 2’s joystick control is modular and can be interchanged with one of the included smartphone adapters. Both USB-C and Lightning adapters are included and allow your phone to interface directly with the Pocket for recording control, live view monitoring and playback.

The base of the Pocket is also interchangeable. In the standard kit you have the option of using a low-profile base or a slightly larger one with a threaded tripod point. DJI’s Do-It-All Handle, available as an optional accessory or as part of the Creator Combo, can also be attached here, bringing wireless connectivity, a speaker, and a 3.5mm microphone port to the Pocket. 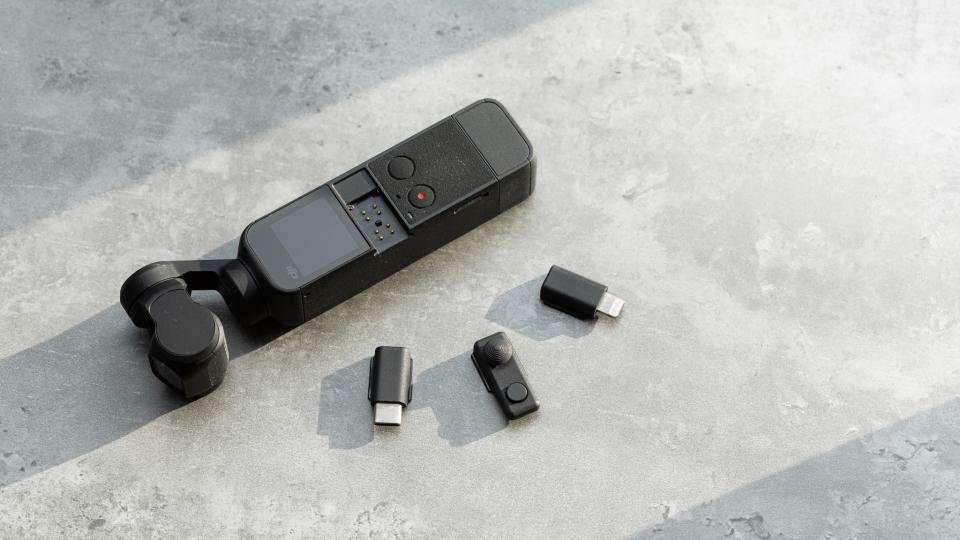 The DJI Pocket 2’s stabilisation is very good. The footage it’s capable of capturing is incredibly smooth, and beats out even the best smartphone stabiliser pairings we’ve tested recently. While it’s excellent at cinematic-looking panning shots, where the Pocket 2 really stands out is how it handles motion, smoothing out footage shot while walking or running.

When it comes to video quality, you have the option of shooting up to 4K resolution at 60fps, but you need to drop down to 30fps to film in the 100Mbits/sec high bit rate mode and down to 2.7K if you want to enable tracking. DJI has announced that the Pocket 2 will support HDR recording at up to 2.7K, but this is due to be added during a future firmware update and wasn’t available during my testing, which was a shame. 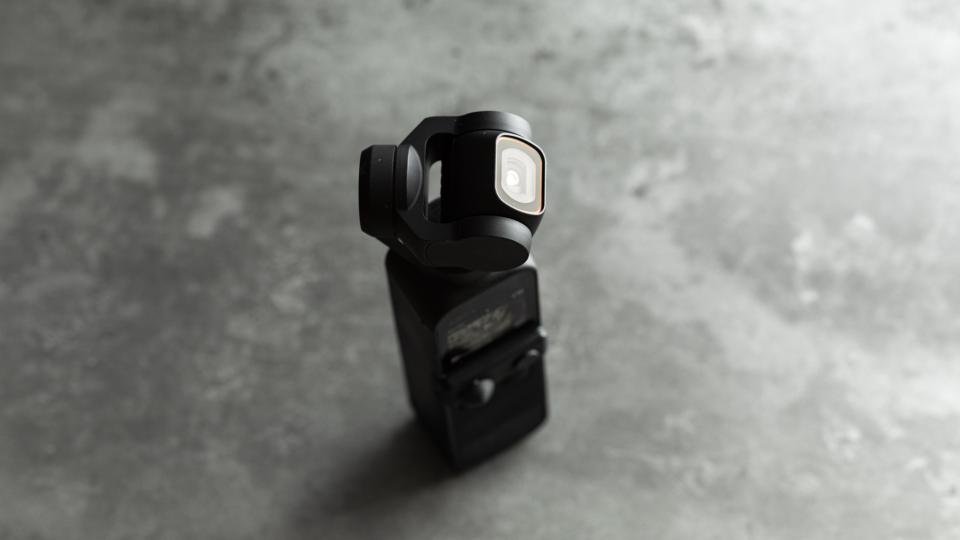 The high bit rate 4K footage at 30fps is crisp, richly detailed and retains accurate colours. It’s even respectable in less than optimal lighting conditions where most action cameras tend to get mushy and grainy. I did, however, come across some noticeable compression artefacts when filming busy textures, although that’s certainly not an issue unique to the Pocket.

DJI’s ActiveTrack 3 is deployed to great effect with the Pocket 2, even if it’s not supported in 4K modes. You select your tracking point, which is easier done on your smartphone than the Pocket’s miniature touchscreen, and the camera will follow using the three-axis gimbal. It’s a solid feature and will no doubt be utilised to great effect by solo creators.

What really sets the Pocket 2 apart from standard stabilised cameras, though, is the selection of dedicated feature modes. Hyper lapse, time lapse and motion lapse modes are all available along with an in-camera automatic panorama mode. Hyper lapses come together beautifully and can compress vast expanses of motion into concise gliding video clips. The motion lapse mode, meanwhile, allows you to set multiple waypoints to capture eye-catching panning time lapses.

The slow motion mode isn’t quite as impressive, however. You can record up to 8x slowmo in 1080p (up from 4x on the original Pocket), and while the footage is smooth, the results are very soft.

The audio side of things is much improved over the previous Osmo Pocket. Audio is crisp and clear, with enough body to capture pleasing vocal recordings. Things get particularly interesting when you engage DJI’s Matrix Stereo mode, which makes use of all four microphones at the same time, producing more immersive soundscapes.

Things aren’t quite as consistent when it comes to still images. Despite the differences in image sizes, I found very little difference in quality between the 64MP and standard 16MP shooting modes. The images are fine, but wouldn’t stand out against a lineup of decent smartphone shots. The “lossless” zoom in the 16MP mode is also quite disappointing since the results are basically mushy crops. 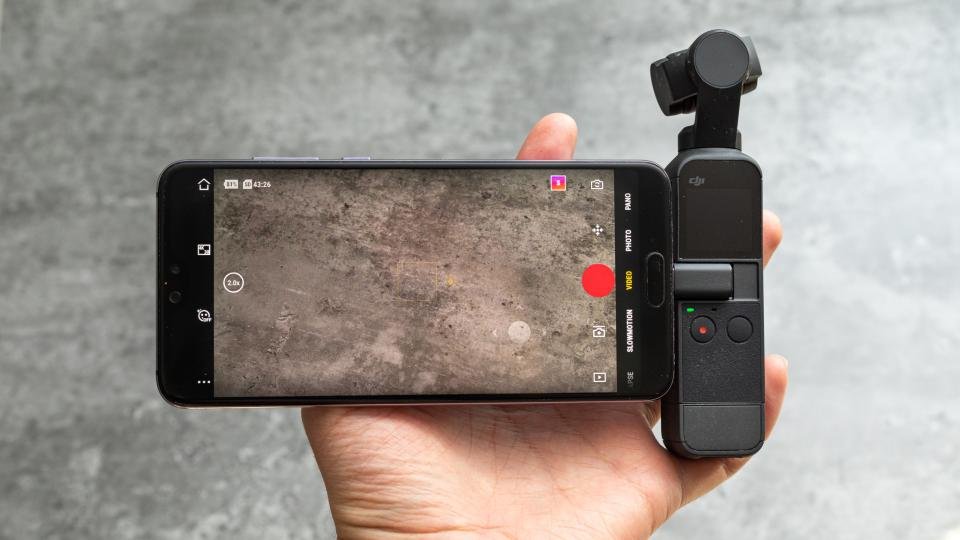 Throughout my testing, I used the Pocket 2 on its own and also paired it with my smartphone from time to time. I think both setups have their place, and while it’s certainly easier to control using the larger screen on my Huawei P20 Pro, I didn’t really have an issue recording with the Pocket 2’s onboard display.

I can’t shake the feeling that the Pocket 2 on its own seems a little incomplete, though. The fact that there’s no built-in speaker pretty much necessitates pairing it with your smartphone, at least periodically. Since it lacks any form of wireless connection, that also means using a physical adapter, which is a bit of a pain.

The Do-It-All Handle accessory solves both the speaker and wireless connectivity issue, of course, but you’ll need to purchase it separately (£95) or as part of the Creator Combo (an extra £130).

Still, if you’re looking for a creative, compact, 4K video setup then you’d be hard pressed to find a more extensive feature set in a smaller or cheaper package. The stabilisation is just about as good as it gets at this price and the audio improvements alone justify the upgrade over the original Osmo Pocket.

It’s not perfect – stills shooters are better off looking elsewhere – and you’ll likely want to factor in picking up the Do-It-All Handle but, for vloggers, Youtubers, and social media content creators, the DJI Pocket 2 is likely one of the best all-in-one options on the market right now.