Ad Fraud allegations published by Social Puncher brings up a pretty serious issue in the ad publishing community. The audit and investigation report was quite thorough and detailed about the fake traffic schemes including the players involved.

Part I of the report calls this scheme a “primarily a financial crime” stemming from advertising fraud.

My questions stemming from this report are:

Is the main reason these publishers are able to operate is because Google looks the other way when the traffic is purchased through their network?

In a nutshell, there are 4 websites that were researched, that are mimicking local news websites. It appears that the major source of traffic is from direct bots or purchased traffic. These sites are generating millions of ad views across their sites.

The websites from the first ad fraud report included:

In the second report, more linked websites were uncovered:

At the time of writing this, only the AlbanyDailyNews and LaredoTribune are still live. A short life span is typical of websites committing ad fraud.

These sites all have one thing in common, EZOIC is their publisher. Ridiculouslyextraordinary was even reported by the owner to have been sold to the owner of EZOIC.

Ezoic is a platform for publishers that provide web publishers the automated web intelligence for their ads, content, layouts, and more. Ezoic was founded by Dwayne Lafleur in 2010.

About the Simulated Media Local Sites

Here is an example of that:

There was a top article “Massive Whale Approaches Kayakers …” on Staton Daily and remains at the same position for more than a year since its launch in 2016. It also appeared among the trending news in Albany Daily News in 2019.

Another article “North Korea Claims Nuclear Weapons Being Developed” was also on top of the Stanton Daily homepage in 2016. This article also appeared on Albany Daily News in December 2019. 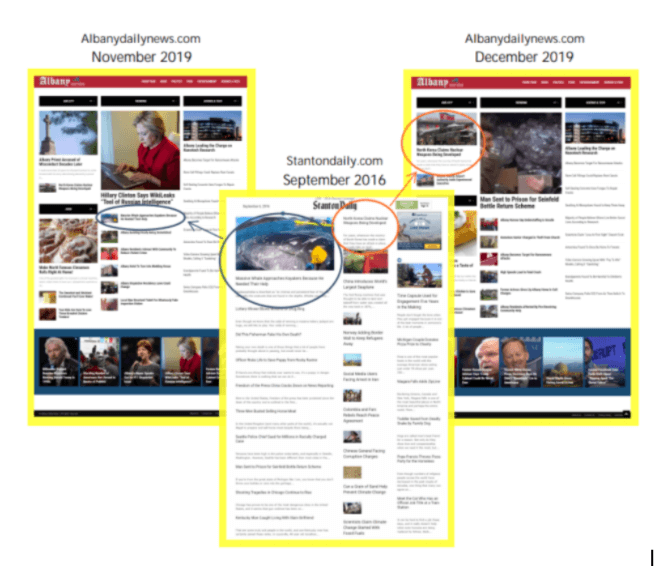 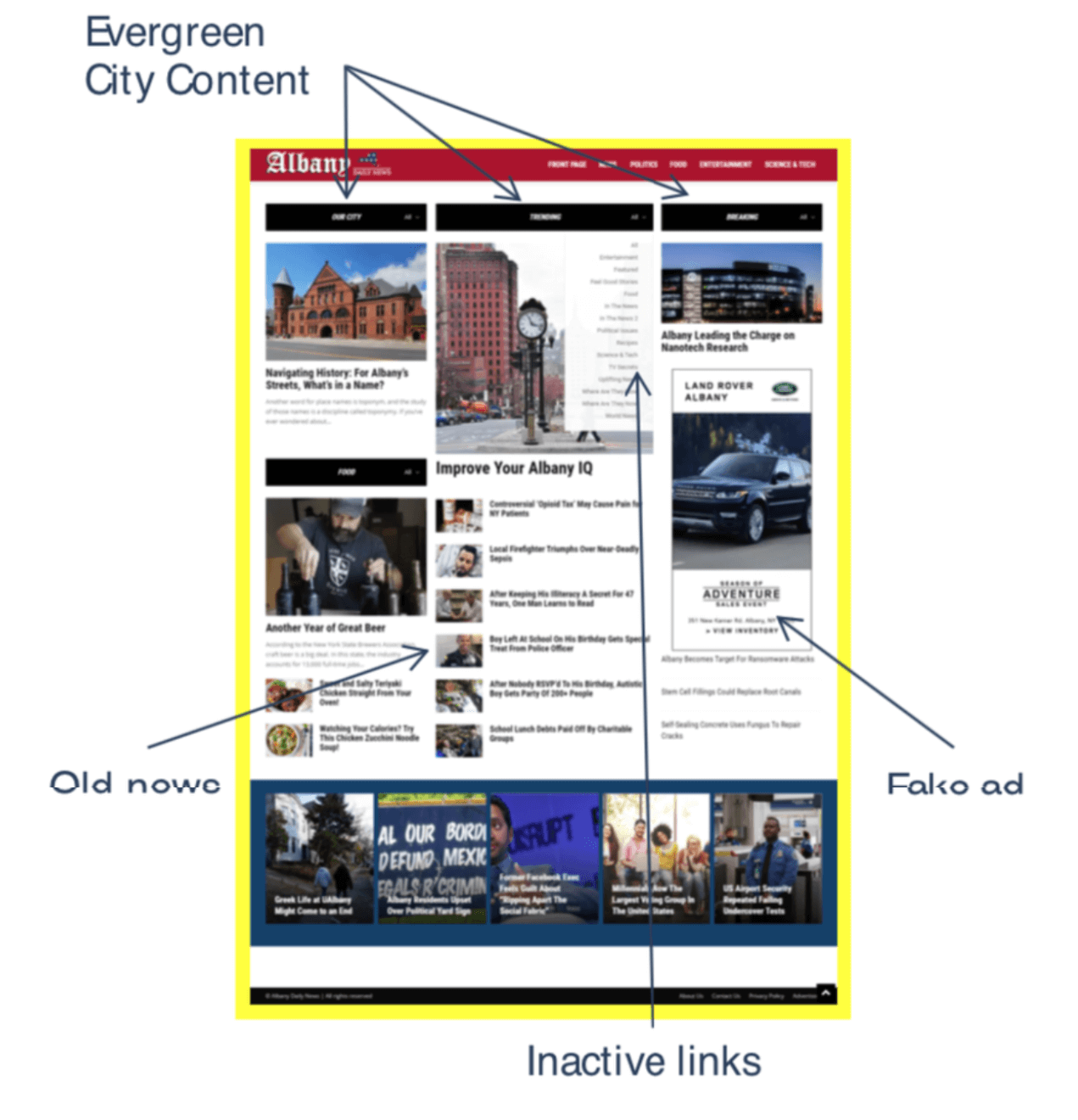 It is exposed that these sites were the clients of Ezoic

According to the report, it is observed that the ads on these sites were well optimized. There were the banners of the best brands and a large number of advertising impressions per visit.

The ad tech inventory of Ezoic fully controls the ad display on 5 active sites of this scheme.

All the ad slots are marked with the Ezoic logo in the lower-left corner. Here is proof of it.

Another proof is that The Albany, Edmonton, and Laredo sites use the same standard Ezoic privacy policy, and are hosted on Ezoic servers.

Ezoic records data about the individuals and the traffic to this website. Ezoic is this website’s limited agent (and data controller in the EU context) for the purpose of providing Internet data and optimization services. Ezoic may use this data to improve its service or enable other services (e.g., using visitor traffic logs or data posted through the service to improve the optimization of other websites).

On Ezoic’s website, they are clear your site must be in compliance with no invalid clicks, reliable traffic sources, not using automatically generated content, not using content that is copied from other webpages. 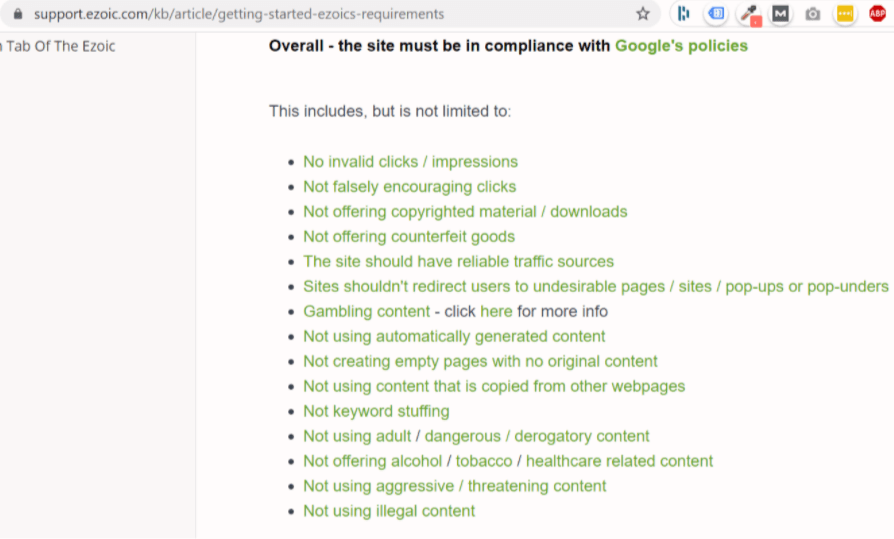 So why was AlbancyDailyNews in the Top 10 largest publishers of EZOIC and in violation of their compliance requirements? As Social Puncher quotes “at least several employees, and even the CEO, should be aware of this”.

In addition, if they were google’s policies, why were these sites able to collect publisher revenues without validating traffic?

How is Fake And Common Traffic determined by Social Puncher?

Just some of the reasons that Part 1 of the Social Puncher report gives to indicate why it can’t be human traffic:

CTV News in Edmonton even reported on the fake website of cityofedmontonnews.com. As they noted, only 7% of the traffic was actually from Canada, a strange demographic for a Edmonton based news site.

As of writing this, only 2 of the 8 websites are still up, AlbanyDailyNews.com and LaredoTribune.com. Both have removed the Celebrity category from the main menu, so they give the appearance to be a local website. However a quick audit of the website shows the pages visited are still the celebrities then and now category. 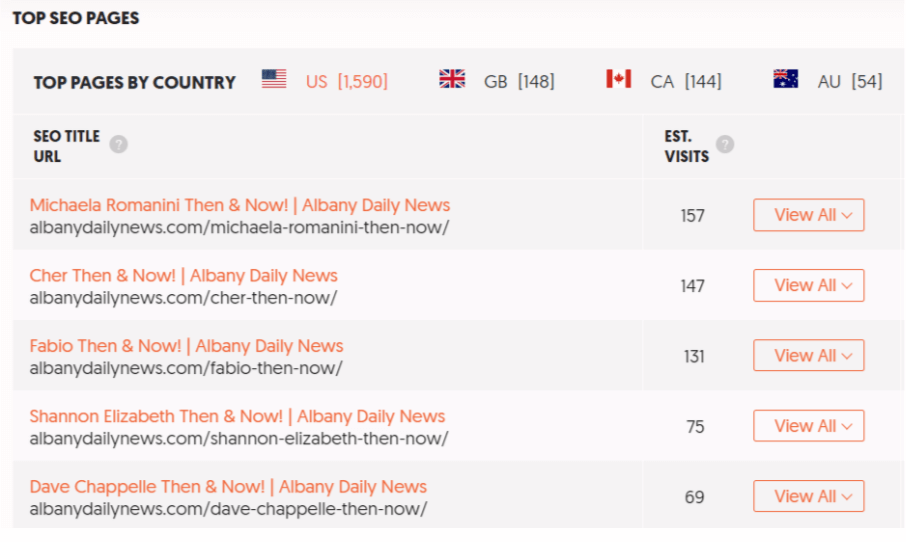 You will notice Ubersuggest now shows this website to have significantly less traffic.

Ezoic’s business model and value of the simulated media scheme

According to Similar Tech, a total of Ezoic’s ad inventory has been detected on approximately 6,000 domains.

Albany Daily News had the largest number of page views and ad impressions. It was the most profitable site partnering with Ezoic in August. The city of Edmonton News also hit the top 10 largest sites during the summer of 2019. These facts allowed Social Puncher to conclude that it was one of the largest, or even the largest publisher using Ezoic in 2019

In February 2018, a case study about Local Media Publishers was released. As the most profitable “local media” in 2017 among Ezoic’s customers was Stanton Daily, but the report only mentioned San Angelo Live and My News LA, whose programmatic revenues are significantly lower. Ezoic avoids the disclosure of large sites that generate the main income and consistently hides the connection with some publishers.

Who owns these sites?

The main question is are all these sites related?

In 2017, a new standard was set in the ad industry, all sites should have an Ads.txt file. It contains information about the advertising systems installed on the site and unique publisher IDs that profit from this asset.

All IDs are anonymous, but if the set of IDs on different sites is identical, then we can say for sure that they have the same beneficiary, since many different systems transfer money to the same account. Ads.txt is not a mandatory standard, but is highly recommended for large publishers. However, the Laredo Tribune, despite traffic of 3 million visitors in October and an estimated revenue of more than $100,000, does not have Ads.txt.

This was enough for Social Puncher to determine that the assets all belong to the same owner.

On the website, Ridiculouslyextraordinary.com, when the owner sold, they posted that they had sold to Dwayne LaFluer, also the owner of Ezoic. 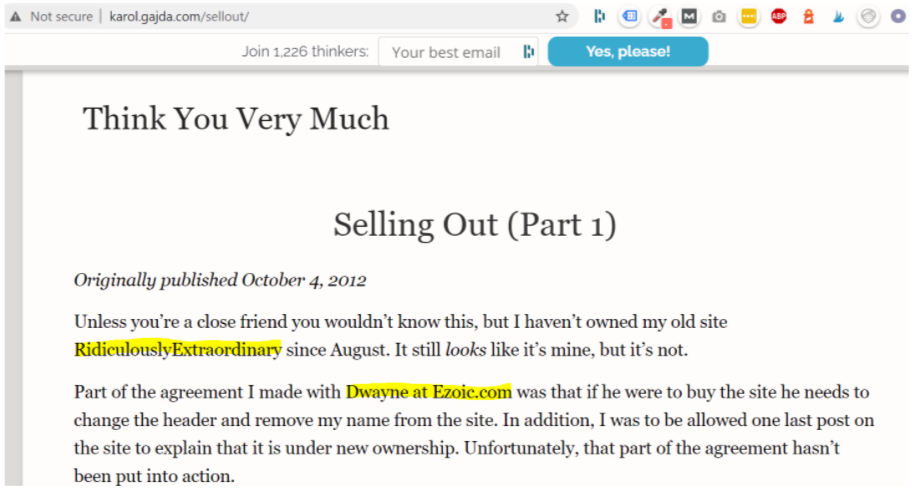 Ezoic Media and its 400 unknown assets

Ezoic, however, is still a big publisher.

According to the previous owner of ridiculousextraordinary.com he sold his website to Ezoic.

That got us curious, is Ezoic a publisher themselves?

Enter Ezoic Media, is a subsidiary of Ezoic Inc. according to their website. 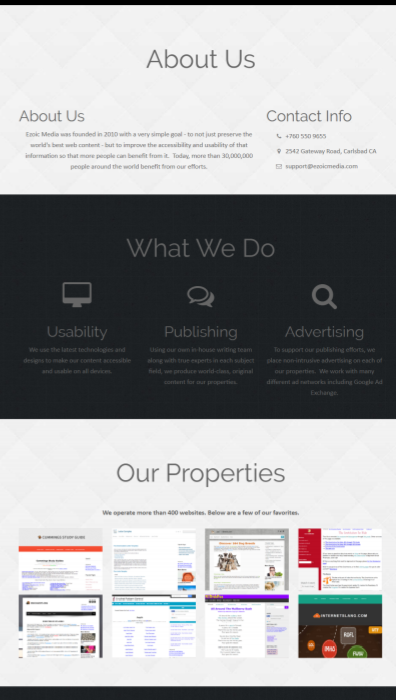 They report to have more than 400 websites, they only list 8 examples of favorites.

They have a 90s style design and pretty low traffic. These are very old domains, but none of them are officially owned by Ezoic. According to the Whoisology service, Ezoic Inc. owns only 10 domains now. It owned 28 domains in 2016-2017, this was the maximum for the last 6 years.

Its corporate site was created only in 2015 and has not been updated since. According to About Us on ezoicmedia.com, it is the same age as its parent company.

Could Ezoic itself be the publisher of these ad fraud websites?

How much does this Ad Fraud Scheme make?

The estimated income of these 8 sites, are estimated to be in the millions.

No doubt, sites like these in the Publishers income list also helped EZOIC when raising more capital.

The news about this appeared on August 6, 2019, but apparently the deal took place in May. The sole investor was Sageview Capital. This is not a large fund that makes targeted investments, carefully selects companies and thoroughly checks them before the deal.

Google does not consider the traffic on the sites as suspicious, and the best brands still advertise on these sites.

The audit of media assets is carried out primarily on financial indicators but no one checks the use of shadow schemes or illegal techniques.

But it turned out that according to Google’s methodology, the Albany Daily News is a reliable media asset with a real audience.

Ask yourself, if you are the advertiser paying for ads on the Albany Daily News website which has been found to be abnormal, potential bot traffic, would you be happy?

Ad fraud is theft of advertising dollars that a real advertiser is paying publishers to show to potential customers.

Whose responsibility is it to ensure that schemes such as these don’t exist?

Is it Google’s or the responsibility of the Ad Network, or in this case Ezoic.

Ezoic has an excellent reputation, and has even won Google’s Business Innovation Award. But as we can see, Ezoic is also allowing it’s publishers to optimize ads for simulated media with potentially artificial traffic. And could potentially even own one of the websites.

I am curious how these sites are passed under the radar by both Google and Ezoic.

One theory is, does Google detect invalid traffic with paid ads?

It’s been a year since the Social Puncher report was published.

It does appear that these sites are no longer advertising with Ezoic and have no advertising at all. But that doesn’t change the fact that they collected a lot of money during the time the websites were live.

What do you think? What should us as an ad community do to protect our advertisers? Leave a comment below.