The Apple Watch Series 8 is the newest addition to the company’s smartwatch lineup. The new model comes packed with several noteworthy upgrades, including a new chipset, a more durable design, Crash Detection, and a new temperature sensor. But does the new smartwatch support Qi wireless charging?

Although the Apple Watch Series 8 supports wireless charging, it can’t be charged using a Qi-certified charging pad. There’s only one way to charge the smartwatch and it’s using the proprietary magnetic puck that comes with it. Since the release of the first Apple Watch, Apple has continued to use this same proprietary charger even as the company’s other products such as the iPhone and AirPods have embraced Qi wireless charging.

Apple’s refusal to adopt the universal wireless standard is also ironic in the face of its environmental messaging. When Apple announced its move to stop bunding chargers with iPhones and Apple Watches, it said it was doing it to reduce electronics waste and carbon emissions. But by not adopting a universal charging standard and promoting proprietary cables and charging tech, the company is only contributing to more electronic waste.

Hopefully, this is the last generation of the Apple Watch to use a proprietary charging solution, and we pray that future models support the Qi standard. But as it stands right now, the Apple Watch Series 8 can only be charged using the magnetic puck that comes with it or a MagSafe charger. 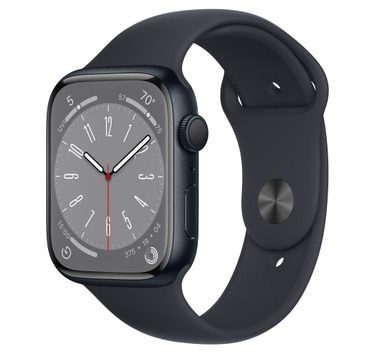 Buy from Best BuyBuy from AT&T

The Apple Watch Series 8 offers the same battery life and charging speed as its predecessor. It’s rated for 18 hours of endurance on the standard mode and up to 36 hours when used in the new Low Power Mode. The new watch starts at $399 and is now up for grabs from Apple’s official website and other retailers. If you’re thinking of getting one, be sure to check out the best Apple Watch Series 8 deals to save money.