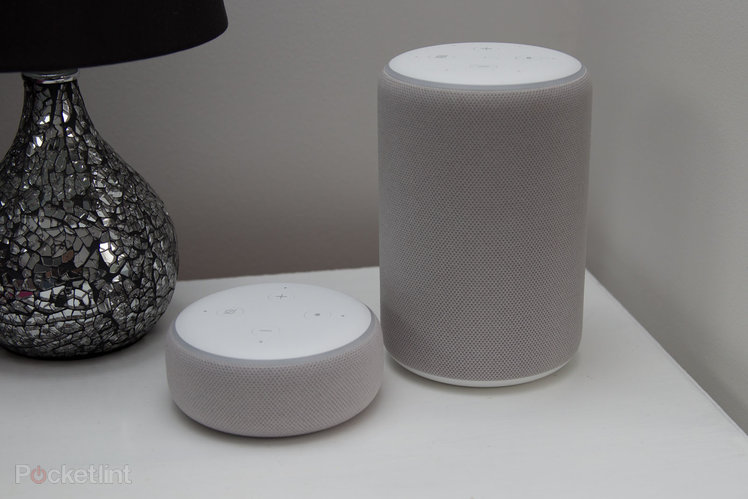 The Amazon Echo got off to a flying start, establishing itself as one of the hottest smart home devices, assisted by the smaller Echo Dot, a capable sidekick that brings its connected skills to existing speakers you might have. Amazon hasn’t slowed, expanding its range of speakers – as well as the functions they offer.

We’re diving into what it’s like living with Alexa on numerous devices, with multiple Echo or multiple Dots spread around your home and whether there’s any great benefit.

Adding a new Echo or Dot to your home is straightforward, following the same steps as when you setup your first device. Open the Alexa app, go to the hub of the device (icon in the bottom right corner) and hit the “+” icon in the top right corner. Then follow the process as you did before. (You can achieve the same result with your Alexa account on a desktop PC if you prefer, under the settings section.)

It’s really as simple as that. As it links to an existing account, it adopts the skills of the existing device(s), so there’s no need to set up all the individual elements again.

The next decision is where to place your new Echo. Amazon built the Echo to be smart enough to respond to your commands across the room. The devices make use of “Echo Spatial Perception” which means the Echo that is closest to you should be the one that responds. That’s true whether you’re using the original Echo or one of the new generation of devices. 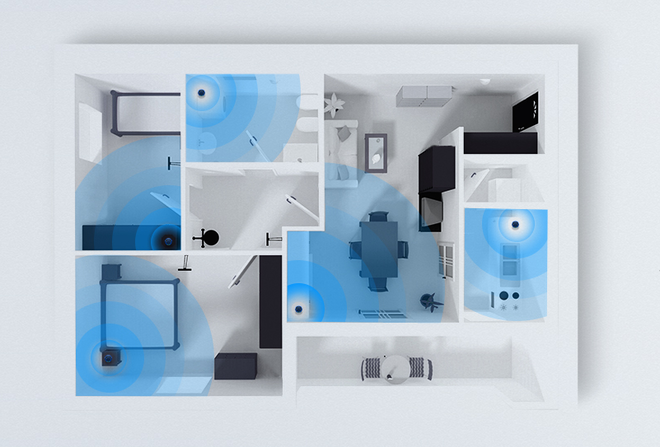 In the early days, you could confuse the system where more than one device tries to respond, but as the system has matured, that no longer seems to be a problem.

Setup is easy, so what can and can’t you do with multiple Amazon Echos?

In reality, there isn’t that much that changes by having more Echo devices – outside of stereo pairing and the new Alexa Home Theater/Cinema, which we’ll talk about below. The core functionality of Alexa and the Echo (whether that’s the Dot or not) doesn’t really change when it’s doubled up, with minimal syncing between the two.

There are a few areas where all the Echos will sing in harmony, but for the most part, each works as an individual.

We’ve covered how to set up this multi-room music option before, but what this means is you can easily get tunes thumping throughout your house, without having to invest in a system like Sonos.

You can play music from Spotify, Apple Music, Deezer, Amazon Music or TuneIn radio on multiple Echos, so you can very easily have synchronised audio in a number of locations.

Unfortunately, you cannot use an Echo Dot to connect to another Bluetooth speaker while part of a multi-room group. If you had an Echo Dot in the living room that connected to an amplifier, for example, you couldn’t maintain that connection while also playing on the larger Amazon Echo in the kitchen or bedroom.

Multi-room grouping also doesn’t work with third-party speakers using Alexa (like Sonos One), it only applies to Amazon’s own speakers. While there’s a range of speakers in that group, it doesn’t give you the flexibility that Apple AirPlay 2 does when it comes to grouping.

You can also play music from different sources on different Echos whenever you like. For example, you can play TuneIn Radio in the bedroom and Spotify in the kitchen. Which is a handy way to keep the family happy.

But you can also ask any of your Echos to play some music on other Echos you have. For example, you can ask your Echo Show in the kitchen to play Spotify music on your Echo Plus – and this is a great way to control music around your house.

Stereo pairing is a feature that arrived with the Echo Plus second-gen and the Echo Dot third-gen, but also works with the latest Echo third-gen. Pairing is simple: just like creating a multi-room group, there’s the option to create a stereo pair. 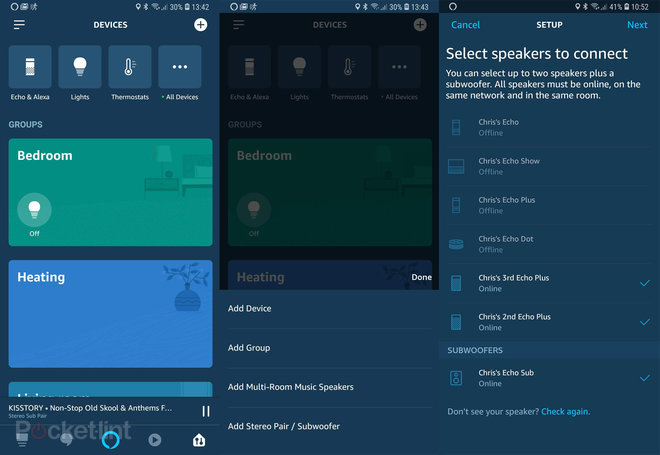 The caveat here is that you’ll have to have the same type of speaker: so two Echo, two Echo Plus, two Echo Dot or two Echo Studio. With the arrival of the Echo third-gen the rules change slightly, because the third-gen Echo will stereo pair with the Echo Plus second-gen.

Once paired, however, you have much better music system – and with the option to include the Echo Sub in the mixture, a 2.1 system is now possible – and it sounds really good. Adding the Sub is via the same process as above.

This is a new addition to the skills of the Echo, allowing you to create a sound system that will work with your Fire TV. Again, you’ll have to have the right speakers as well as a compatible Fire TV Stick or Fire TV Cube, then you can create a home entertainment setup for your TV.

We’ve detailed how this works and what device are compatible here.

This is a great way to use your Echo devices to boost the sound of your TV, but it only works with audio coming from your Fire TV device – it won’t apply to content from other sources (a tuner or cable box for example), so this setup might only work if you’re a heavy streamer.

This is one area where the Echo isn’t so good. Because all the devices are signed into your Amazon account, they all try to play music from the same account, because it thinks everyone is the same user. That means you can’t play different music on devices from the same source. For example, if Spotify is playing in the kitchen, if someone asks to play Spotify in the bedroom, it will switch from one location to the other.

However, some family accounts support multiple streams – both Apple Music and Amazon Music do – which means signing up for a family account for with of those services will let you stream different music on your Echo devices around the house. There’s the added advantage that if all the family members want music on their phones out of the house then they get that too.

If you don’t have a family account, your Echo will most like switch the stream from one device to another, so it’s only playing through one.

Bluetooth connections are treated separately and not common between your Echo devices, which makes sense as you might not want the devices interfering with each other or connecting to a Bluetooth speaker in a different room.

We’ve found Bluetooth connectivity on the Echo Dot to be seamless and once it’s initially set up it is easy to tell Alexa to “connect to my speaker” to re-establish the connection – although as we said, it doesn’t support multiroom in that guise.

Some things are synced to your Alexa account and those are therefore accessible on the various Echo devices you might have scattered around the house. Add something to your to-do list or shopping list and it’s immediately available elsewhere too.

The shopping list is handy because it’s stored within the app, so you can verbally add things to your list through any Echo device to check on your phone when you’re next out shopping.

Of course, things like synced calendars or information from Skills you have setup are available on all your Echo devices.

The Echo is great for setting timers and alarms, whether that’s for waking you up in the morning or as a reminder for when food will be finished cooking or the washing machine needs emptying.

Now, timers and alarms are specific to the device they’re set on. If you set a timer using an Echo Dot in the kitchen, it shouldn’t carry through to the Echo or Echo Dot in the lounge or bedroom – but sometimes we have heard that alarm in different rooms.

Within the app, you can add another Amazon user to your Household Profile. This is beneficial in several ways, first and foremost in that it gives that person access to their own content (music, audio books and Google Calendar).

It’s also worth doing if you have an Amazon Prime account but the other person doesn’t, as adding them to the Household Profile allows them to take advantages of Prime benefits too. You can find out more about the benefits here and manage yours here. 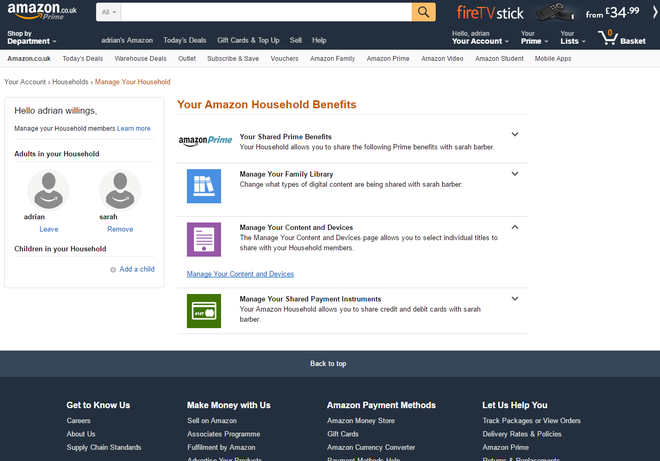 You can also use this to choose who sets up the Echo devices and which account they are assigned to. You need to get the other people in the house to download the Alexa app and sign the terms of agreement, then once accounts are connected you can tell Alexa to switch between the profiles which is handy for managing content, placing orders and more.

Having multiple Amazon Echo devices in your home also gives you the ability to use them as intercoms around the house. If you go into settings in the browser or Alexa App, all you have to do is name your devices according to the room they’re in then you can “drop in” on that room from afar. This drop in ability lets you use the Echos as a loudspeaker to broadcast your message. 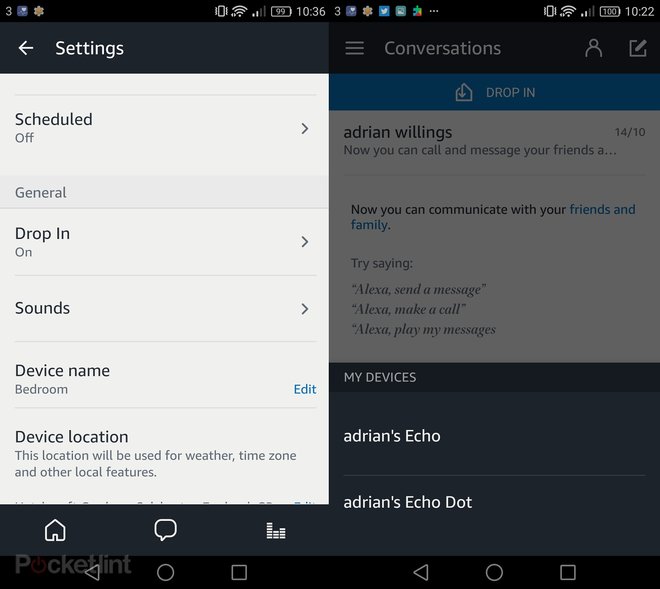 You can do this from your phone by opening the app and clicking the “drop in” button then selecting the relevant Echo you want to talk to. This then essentially calls that device from your phone and allows you to speak to whoever is on the other end. The same ability is as simple as saying “Alexa, drop in on the bedroom” to another Echo elsewhere in the house.

You can already see the possibilities with this system – whether it’s buzzing the kitchen to ask if dinner is ready or calling up to your children without having to shout up the stairs. It works really well too – just make sure you name the devices logically.

It’s worth noting that you can also place calls to Echo owners in your contact list using your Echo device. This will allow you to place calls for free to people in other households, which is handy too.

There’s also a broadcast function: say “Alexa announce” or “Alexa broadcast” and you can send a message across the entire network in your house. It’s ideal for getting people to the table for dinner.

Despite having the ability to add multiple users to the account, Alexa is not yet capable of distinguishing between users based on their voice, so you need to physically tell an Echo device to switch accounts before it will do so. This is especially relevant if you’re placing an Echo device in someone’s bedroom and you want it connecting to that person’s content.

Unfortunately, if you tell Alexa to switch accounts and then request a song on Spotify you’ll currently find her returning a message about how Spotify playback is only available through the primary user’s account. You cannot, therefore, prevent household use from ruining your Discover Weekly or allow family members access to their own playlists.

Are multiple Echos worth it?

The advantage of having access to Alexa’s features doesn’t hinge on building some sort of super Echo network in your house. Being able to use the Echo’s smart voice controls across your home is the real advantage: you can control your lights or heating via voice from upstairs or downstairs. If you have a loft room, the Dot of Flex will bring voice control that’s outside the range of your Echo downstairs and so on.

With multi-room audio support, there’s certainly something to be said for owning multiple Amazon Echo devices in close proximity.

With the Dot being so affordable, if you’re a fan of the Echo then it’s certainly worth the expansion, even if that’s just to give you voice control over your smart lights or heating from more rooms in the house.