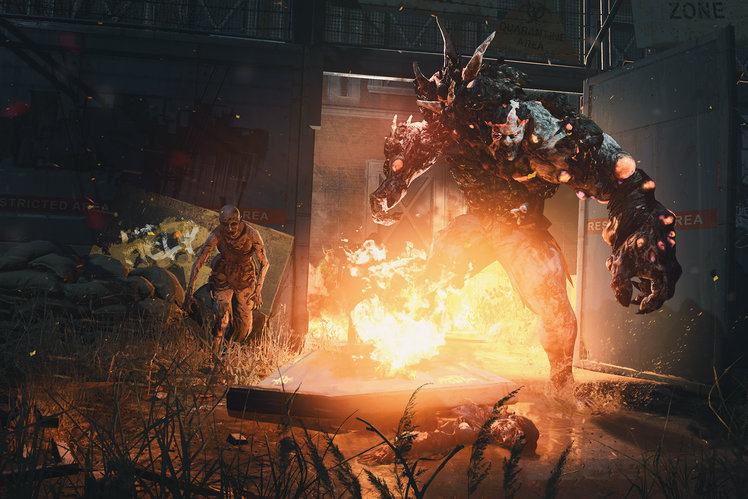 Polish developer Techland has been making games for more than two decades, including fellow first-person zombie fest Dead Island, but it wasn’t until the innovative, parkour-inspired Dying Light that it started to be talked about in the same breath as the likes of CD Projeckt Red or Guerrilla Games.

The scope and detail in that post apocalyptic, open-world action role-player gained it legions of dedicated fans, so much attention was put onto a follow-up – not least because it’s taken the best part of seven years to arrive. Indeed, the studio sparked a mighty furore by simply announcing a delay Dying Light 2’s release, from late 2021 to early 2022, such is the expectation. And, we’re sure glad it did as the end result clearly benefits.

Dying Light 2: Stay Human is a massive game that takes most of everything we liked about the first and beefs it up tenfold. As such, it would have been easy to include several misfires, bugs and crazy design choices. That we didn’t find any of those in our multiple hours of play with review code on the PlayStation 5 is testament to Techland’s decision. Add to that our excitement of replaying the game after to find multiple different story paths and side missions we had to skip in our first run, and we have to doff a cap to the very concept too.

Like the first Dying Light, this sequel is essentially a zombie action-survival game, although it has a lot more scope and character. Time has passed since the events in Harran and the landscape has become more fractured with small pockets of settlements dotted around the world.

There is one large city left within distance of your character’s starting point – called simply “The City” – and it is here that you spend the vast majority of your time. You play as Aiden, a Pilgrim who usually travels between settlements to deliver goods or information, but you are now searching for a long-lost sister who you have heard might be residing inside The City’s walls.

This sets in motion a story of complexity, many encounters with friends and foes, and a gradually unravelling mystery that reveals your background in flashback form (generally when you sleep).

You can choose to race from main mission to another to complete this overarching story rapidly (which still takes at least 20 or so hours), or you can also complete side missions, tasks, scavenge hunts, and many other small events that you stumble upon along the way.

In our play time, we must have taken part in scores of side quests and incidents, as well as progress through the story. This is a mammoth undertaking, we discovered, and many had to be left aside just to crack on. Needless to say, we’ll be going back to them at some point in the future. 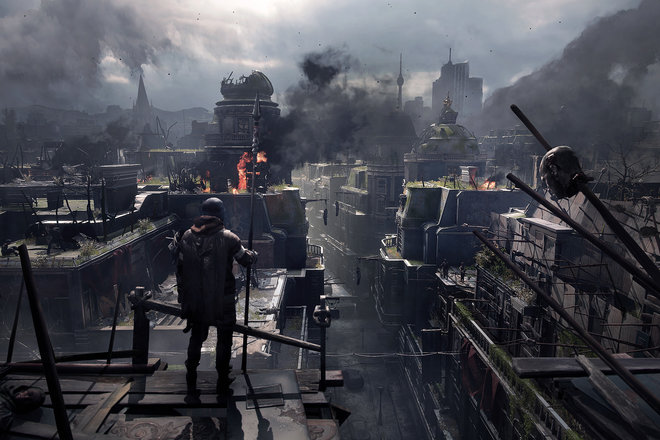 On top of the weight of additional stuff to do, the main story is branching. This is the game’s main idea, that you get major, world-changing options at different points along the way. In addition, other optional tasks can ask you to choose between faction control for zones in The City and your decisions will also impact how the game plays for you.

For example, at one point several hours into the main story, you have to choose whether to side with the Survivors – a rag tag bunch that live in a church – or the Peacekeepers – a heavily armed and heavy-handed militia group.

Your allegiance changes the storyline going forward, the attitude of each of the groups, even the look and feel of The City. Also, when you claim a zone for one of the factions, it presents you with options that can affect your experiences in it. 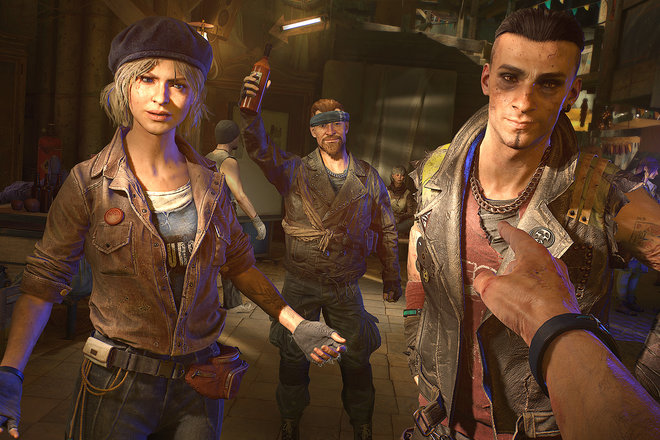 Side with the Survivors and you’ll get guide ropes to help you get around the rooftops more easily. Opt for the Peacekeepers and they will set traps around the zone to help eliminate the infected and other threats.

This all gives you so much control over how you want to play the game, and while the basics remain the same – mainly speed-running around rooftops like your life depends on it (which it often does) – the variety is refreshing.

The game also has a timed day and night cycle that is equally important to its mechanics. Some missions need to be completed at night, some in the daytime, while many give you the choice. However, you will need to be canny with most of them as the world gets very different during the witching hours. 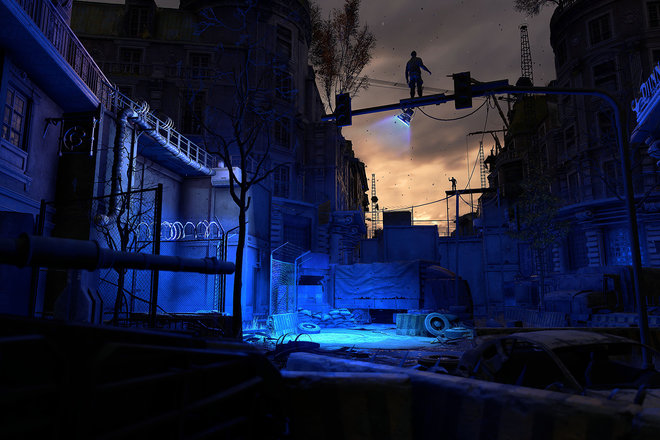 Where you will encounter a few of the undead during the day, the streets get positively crammed with them at night. On the flip side, the interiors of buildings (dark zones) will host far more of them if you opt to tackle an internal quest when it is light outside, as they shelter at that time.

The day/night cycle is fairly rapid and you can force one or another by sleeping in a safe house or UV area where zombies cannot step foot in – as they’d melt. It adds another layer of strategy and planning to even the most minor side missions.

Then there are special types of the infected – stronger or faster mutations that take more than a few hits from a shonky drainpipe. While, as you travel further into The City, you also realise that even the most basic of enemies get stronger as you also level up. 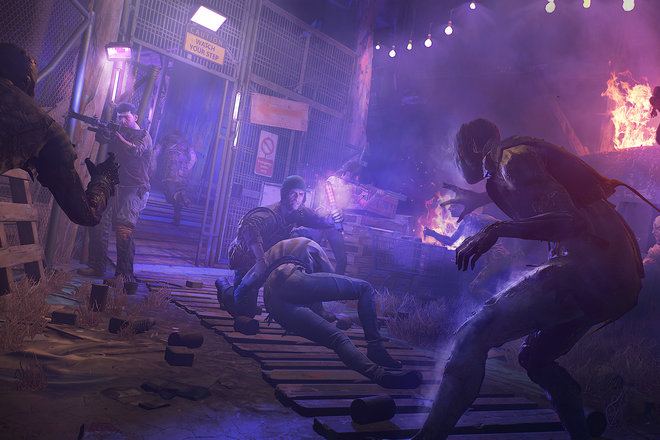 This is, at heart, a role-playing game after all. Foes display their hit bars and levels above their heads (unless you turn it off in the settings), all your weapons have a damage rating. In fact, there are aspects of Dying Light 2 that remind us of the Fallout series. And a lot that reminds us of the last few Far Cry games, to boot. Neither point being a bad thing.

Another nod to action-RPG fare lies in much-enhanced character customisation. Like the first Dying Light, this sequel places a lot of stock in crafting, destructible weapons, and skills. But, like almost everything else this time around, there’s much more to them. 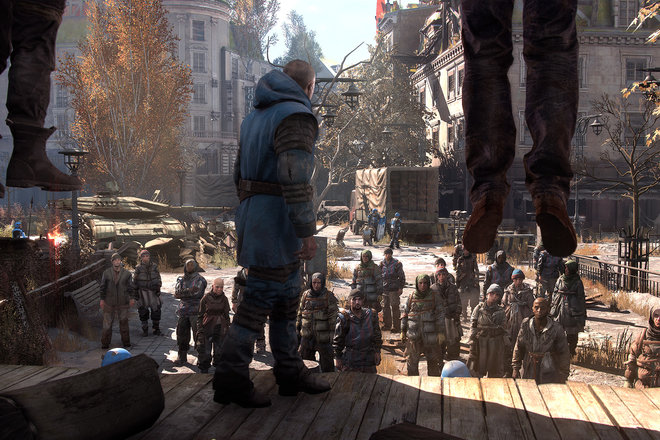 Weapons are far more plentiful in Stay Human and can be better modified. They can also be found with diffent levels and increased damage and durability the further you travel, so you’ll soon find the machete you’ve been saving near the beginning of the game relatively useless later on.

We also advise you don’t get too attached to any found weapons as they have a limited lifespan. However, there is loot aplenty to discover to replenish your stocks.

The same is true with clothing and gear, which increases your abilities and armour rating as you swap each out for better versions. Accessories and consumables can be enhanced too, in order to boost or heal yourself along the way. 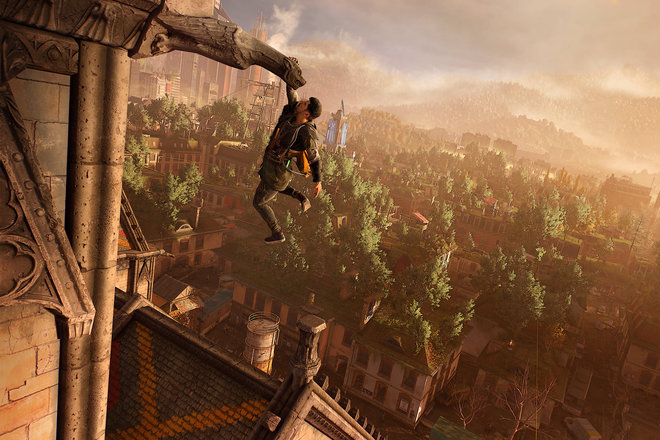 Skills, though, are perhaps most expanded. In the first game, you could improve different capabilities, such as running or combat, by incremental amounts. In Stay Human, a traditional RPG XP system allows you to introduce all-new skills based on trees for combat and parkour. Plus, if you find or are given GRE inhibitors, you can increase your health or stamina. Doing so not only enables you to take more hits or last longer when running, climbing or fighting, but also expands the possible actions you can purchase on both of the skill trees.

This level of detail is similar to other games of the ilk – the aforementioned Far Cry series or Assassin’s Creed – and adds even greater scope to play the game exactly as you want.

In terms of the gameplay itself, Dying Light 2: Stay Human superbly builds upon the excellent parkour mechanics of the first, giving you a faster, smoother, and even more intuitive way to traverse The City.

Played entirely in first-person, you can easily run, jump and climb throughout the entire game with just the left thumbstick and the R1 button. The game does much of the hard work for you, but you always feel you are in control. 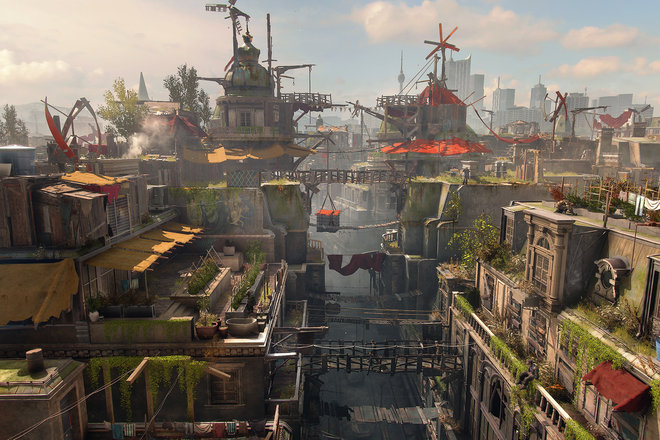 At the start of the game, it’s a little frustrating as you cannot climb much or hang onto stuff for long due to a lack of stamina, but add a few points onto that stat and you’ll rarely have to touch the ground again.

Indeed, even more than its predecessor, this outing relies on the ‘floor is lava’-style approach, giving you the playground and tools to barely have to pound the pavement at all. Dangers can be found on the rooftops, but far less so than below, and you’ll revel in hopping and skipping across the cityscape as much as you would in a Mario platformer.

Combat has been refined and made more intuitive too. It’s mainly melee-based – although you do get access to ranged weapons later on – and fights are visceral and as complex or simple as you choose. You can swing a one or two-handed weapon, block or dodge, with good timing an essential. Plus, unlocked skills can add extra moves to the mix and eventually you’ll find yourself partaking in a delicious dance of death.

This is helped greatly with some superb ragdoll physics on non-player characters (NPCs), whether they be undead or living, and the occasional gory outcome is a delight. Add custom mods to your weapons and you’ll get even more extravagant endings – especially fire effects. It’s all great fun and rarely gets tired. 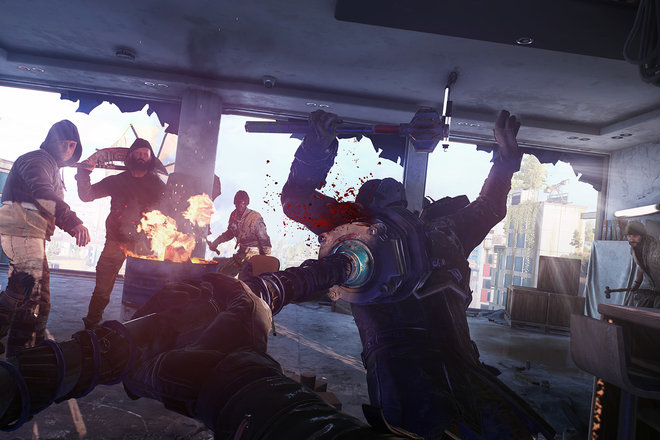 There’s co-operative play too, with much of the above able to enjoy with a friend, but didn’t get to try it out during the review phase so cannot comment on its workings at this stage.

It must be said that there are some caveats to such fun. Dying Light 2: Stay Human is a minor victim to cross-generation development when it comes to the visuals.

The game looks great as a whole, but the PlayStation 5 version feels more like an enhanced PS4 game visually. Character models are nice, especially when the camera zooms and locks onto them for conversations and mission briefings, but there’s not that extra layer of polish you’d expect on a native PS5 game.

It’s worth noting that the PC version is pretty spectacular all-round, especially if you have a top-level rig (as we do in the office), but there were clearly some sacrifices made for the PlayStation release to ensure it didn’t suffer Cyberpunk 2077-level failings on last-gen kit.

That’s partly exhibited in the best graphics mode available on PS5. You get three modes to choose from – Resolution, Quality, Performance – each with their own unique presets.

Resolution mode offers a full 4K experience that looks excellent, with crisp and sharp details. However, it runs at 30 frames-per-second, which we find to be an issue on such a fast-paced first-person game. The stutter can even make you feel a little queasy.

Quality mode swaps the 4K resolution for Full HD/1080p but adds ray-traced lighting support and “other visual enhancements”. It too runs at 30fps though, so is also far from ideal for long playthrough sessions. 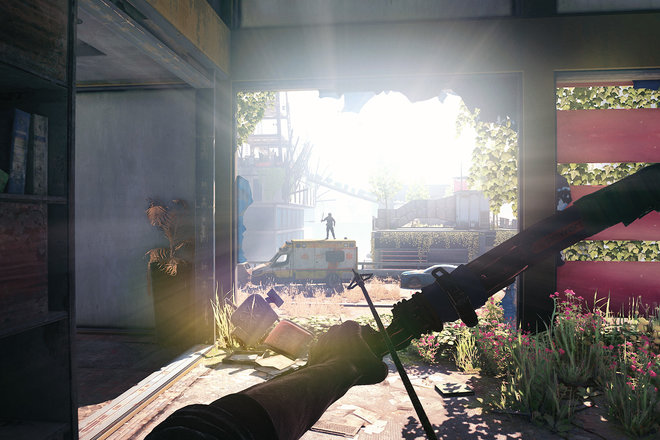 Our favourite mode by far is Performance, as that ups the frame rate to 60fps and beyond, depending on the capabilities of your TV or display. It is only Full HD/1080p though, which softens the image and makes it look more last-gen than current.

At least the options are available and you get the added bonus of adaptive trigger use, which gives you a physical cue when a weapon is about to break, and haptic feedback. Strangely, there’s no HDR (high dynamic range) support at all, which we feel would have enhanced the game during night scenes and in dark zones, but there must have been a good reason for it, stylistically.