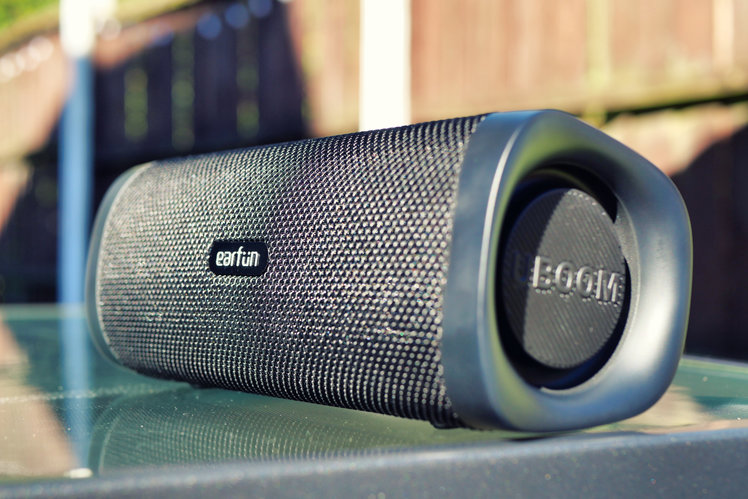 You might not be too familiar with the EarFun brand. The company is relatively new on the scene, having launched its first product in 2019.

Over the last few years, though, it has begun to make a bit of a splash by producing affordable audio products that offer great sound quality.

The Uboom L is the brand’s latest portable Bluetooth speaker, and it promises to punch well above its weight sonically. For this product, EarFun enlisted the help of Austrian music producer and YouTuber, Olaf Lubanski, to provide a tune that unleashes the device’s full potential.

We were curious to find out what all the fuss is about, so we put it to the test over the last few weeks. Here’s what we found.

The design of the Uboom L can best be described as “safe”. It looks exactly how you’d expect a Bluetooth speaker to look, with no outlandish touches to separate it from its ocean of competitors.

There aren’t any colour options to choose from, either, it’s all black everything – with the only exception being the metallic EarFun logo on the front. 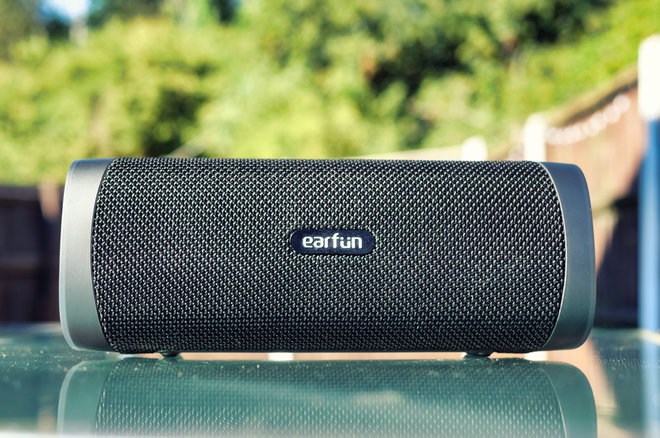 That said, in person, the speaker looks and feels high quality, which does differentiate it from other budget speakers. It has a squared-off cylindrical design with sweeping curves along almost every edge and a rubberised coating on the end caps and passive radiators.

The bulk of the speaker’s body is covered in a woven fabric material similar to that found on the Huawei Sound Joy speaker. This is interrupted by a rubberised panel on the top, which is home to tactile control buttons and some status indicating LEDs. 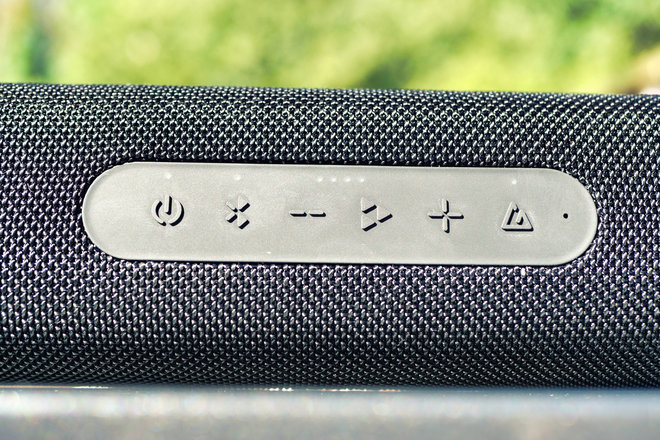 On the rear, there’s a USB-C input for charging as well as a 3.5mm aux input. We were happy to see this included, as it seems to be becoming more of a rarity and allows for connection to a much wider range of sources.

Both ports are protected by a thick rubber cover, which helps ensure the device’s IP67 water and dust resistance.

In addition to waterproofing, the speaker can float. You aren’t supposed to listen to it that way (we’re sure it wouldn’t sound very good), but if you accidentally drop it in the pool, it’ll be very easy to find. 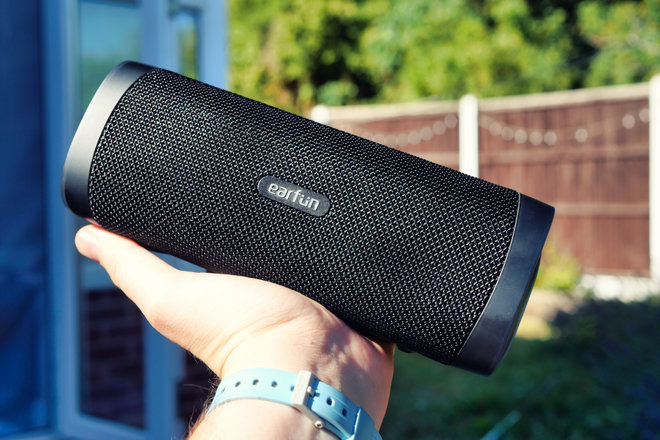 The size and shape of the speaker mean that it can be placed in a bicycle’s water bottle holder, or in the bottle pocket of a backpack, which is a convenient way to carry it.

At 650g it’s substantial enough to have a quality feel, but not so heavy as to be a burden to take with you.

We weren’t really sure what to expect from the Uboom L, since it was our first time using one of the brand’s products, but we were seriously impressed by the sound. It’s spacious, room-filling and surprisingly detailed. 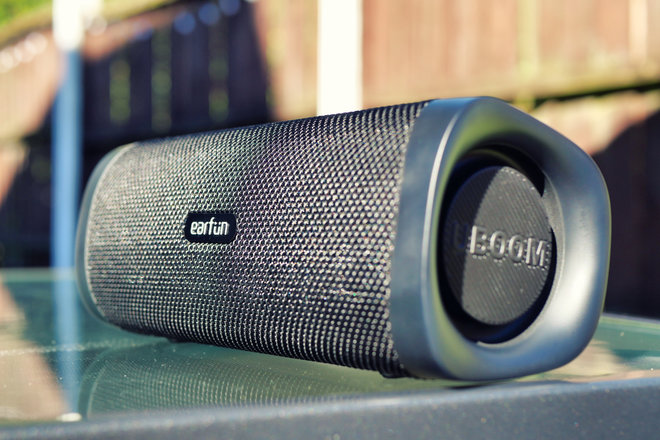 The dual-passive radiators provide some serious thump to the lower frequencies, though bass aficionados might be disappointed by the lack of sub-bass coverage. The radiators are tuned to 65Hz, which means that they provide substantial warmth to the lower mids but can’t extend to cover the deepest tones.

Despite this, we listened to a lot of electronic music, and never found the bass to be lacking, it’s a very warm sound overall. Bass can also be enhanced by enabling “outdoor mode” which increases the rumble a bit further without sacrificing much clarity. 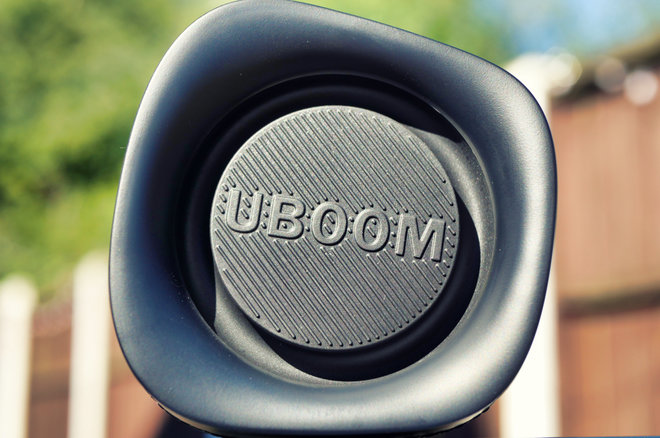 Vocals were a pleasant surprise on the Uboom L, sounding natural with plenty of presence. There’s much more texture and depth to the treble than we’ve experienced with similar-priced speakers, too. It’s very impressive at such a low cost.

If loudness is a key concern, the Uboom L can pump up the volume. We never found a need to exceed around 75 per cent at home, which leaves plenty of headroom for particularly noisy environments.

There’s also a low-latency mode, or video mode, as EarFun describes it. It’s accessed by double-tapping the Bluetooth button, and when active ensures near-perfect lip-sync when watching video content or gaming. This lowers the range but makes videos infinitely more watchable, a worthy trade-off.

Thanks to the use of Bluetooth 5.0 the connection between our phone and the speaker was rocksteady throughout testing.

Plus, the inclusion of an aux input meant that we could connect the speaker to our PC without the hassle of Windows’ inconsistent Bluetooth pairing. 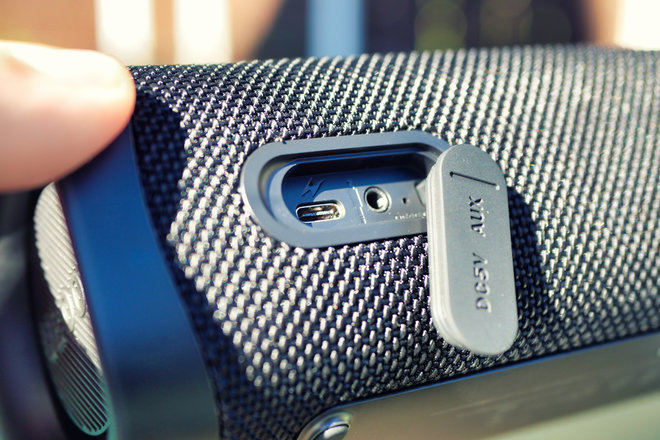 If you buy two Uboom L speakers, you can pair them in stereo for a more immersive experience. This wasn’t something we were able to test, unfortunately, but user reviews indicate that it performs well in this mode, so it may be worth considering.

However, also be aware that buying two speakers moves this option out of the budget territory and places it against some stiffer competition.

There’s a built-in microphone so the Uboom can be used as a speakerphone if required. The mic sounds pretty decent and is nice to have included, but some will make more use of this than others. 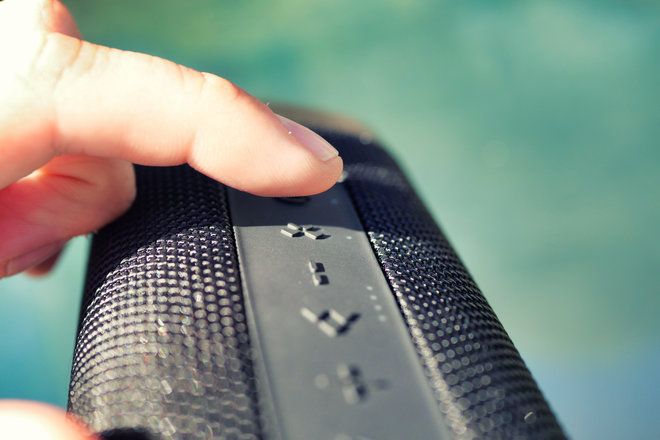 EarFun says the speaker should net you about 16 hours of playback with its 5,200 mAh battery. We haven’t run it completely flat yet, so things are looking promising. It’ll certainly last long enough for most people’s requirements.

When it comes time to charge, it does so via USB-C and comes with a cable in the box. It’s worth noting that the USB connection is for charging only, though, and can’t be used as an audio source.

There’s no fast-charging functionality, either, so you’ll need to set aside about four hours to charge from flat to full.